"The Affair of the Necklace"

In an ill-advised costume drama with Hilary Swank, you take the movie's pleasures where you find them, in the corners of the room or under the rug. 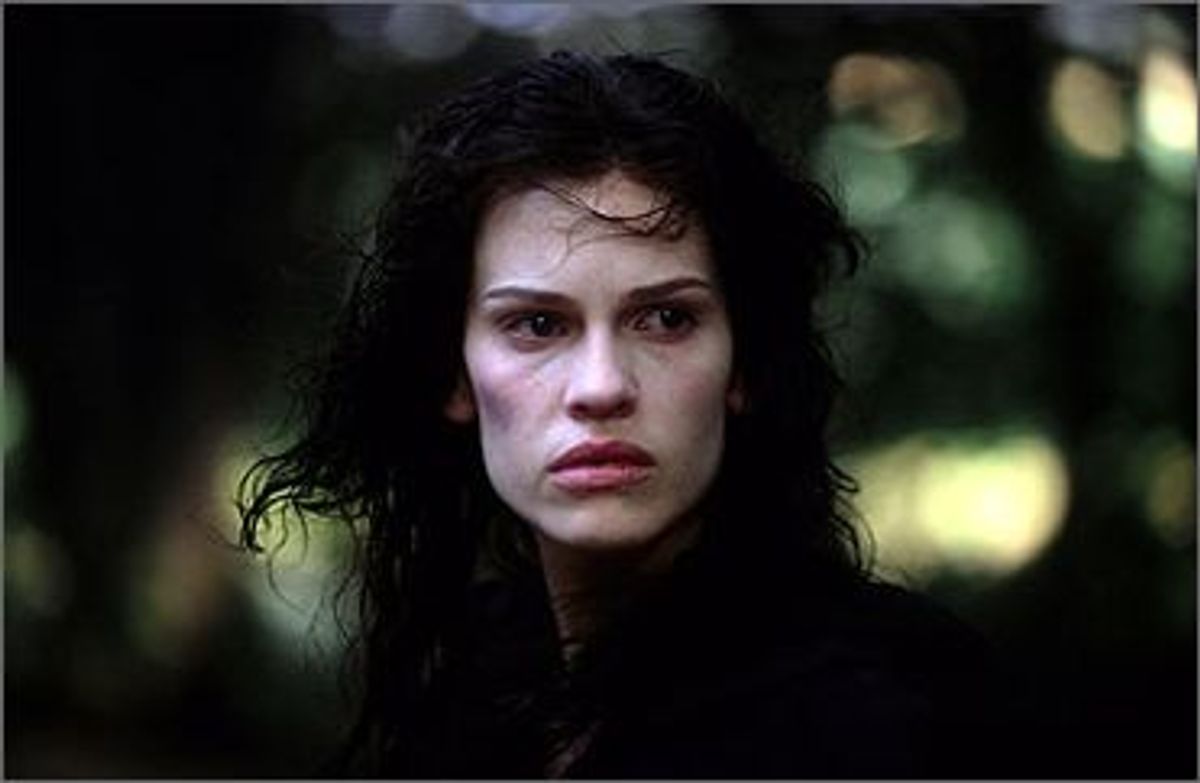 It isn't that Hilary Swank can't play women. She looks smashing crammed into those tight-bodiced 18th-century gowns she wears in "The Affair of the Necklace." But as you watch this inflated Hollywood costume drama -- and the best thing I can say about it is that the costumes and the hambone acting keep it from being a deadly bore -- you keep thinking that Swank is at her best in two scenes. There's the one where she briefly wears a man's three-cornered hat and mugs in front of her mirror, and then there's the one where the tight-bodiced gown comes off.

But apparently Swank can't play this woman: Jeanne de la Motte Valois, the sort-of heroine of this barely comprehensible and deeply unthrilling true-life tale of the ancien régime. Swank's hoity-toity pronunciation is straight out of high school drama class (her father, she tells a detractor, "spoke out a-gaynst poff-erty and tee-ra-nee"); she's clumsy and unhappy in the role in much the same way that this whole movie is unhappy with itself.

"The Affair of the Necklace" is never outrageously bad. It might be more enjoyable if it were. As the lipsticked and lecherous Louis de Rohan -- who, as he constantly reminds us, is "Cardinal of all France" -- Jonathan Pryce prowls through the gardens of Versailles with one eyebrow raised, trying to nudge the whole thing into camp spectacle, without, alas, much success. But for the most part the movie is just pretty and pointless.

In fact, this is a good example of what can happen when a bunch of grownup humans who really ought to know better get funny ideas about art. Director Charles Shyer is a Hollywood lifer with a career of writing and directing popular comedy that stretches from "Happy Days" and "Smokey and the Bandit" in the 1970s right on up to "The Parent Trap" in 1998. What in God's name made him believe he was the right guy to make a movie about an aristocratic scandal that helped to destroy the French monarchy in the 1780s? The results are tedious and polite; it's like watching a bunch of party-hearty frat boys wearing ties and mumbling their way through a cocktail-party conversation about Shakespeare.

I can certainly see the appeal of making a big-budget movie about L' affaire du collier, one of the principal events that confirmed the French public's sense that King Louis XVI and his wife, Marie Antoinette, were extravagant parasites who needed neckline adjustments. But Hollywood has never excelled at this variety of decadent spectacle, or at least not since the days of Erich von Stroheim and Ernst Lubitsch. If it needs to be done at all, it's better left to British and European filmmakers who are steeped in it and can better appreciate both its beauty and its rottenness. (Among living directors, I'd suggest Luc Besson, Jean-Jacques Annaud and Patrice Chéreau as obvious candidates.)

Certainly the story has plenty of juice: The real-life Jeanne, a disenfranchised noblewoman who wanted her family estate back, managed to defraud both the royal jeweler and Cardinal Rohan and steal a prodigious necklace of 647 diamonds meant for Marie Antoinette. But moored as this film is to Swank's studious and awkward performance, it never makes the story feel like anything more than comic opera, or conveys any sense -- beyond weepy family flashbacks -- of why the Valois name is so important to Jeanne.

So you take the movie's pleasures where you find them, in the corners of the room or under the rug. Pryce's debauched comic-villain is pretty much worth the price of admission, even if I kept expecting him to burst into one of Doctor Frank-N-Furter's numbers from "The Rocky Horror Picture Show." Joely Richardson doesn't get much screen time as Marie Antoinette, but it's a sly, commanding performance that reflects a marvelous understanding of this notorious character; I kept wishing the movie were really about her.

As Cagliostro, the legendary wizard-charlatan who is presented as a blend of Rasputin and Albert Einstein, Christopher Walken just does his mock-sinister Christopher Walken act, which somehow should be funnier than it is. Adrien Brody, who plays Jeanne's ne'er-do-well husband Nicolas, encounters the same problem as Swank; lost in a cast of scenery-chewing Brits, he wanders into some mid-Atlantic Neverland accent from which there is no return.

Australian actor Simon Baker ("L.A. Confidential") understands that his role as Retaux, the gigolo and layabout who becomes Jeanne's lover and co-conspirator, requires overripe, almost farcical mugging to suit the material. You get the feeling that if he and Pryce were in charge the whole movie would have been done that way. No one, however, benefits from screenwriter John Sweet's mock-Beaumarchais dialogue, which is always trying to sound antique and naughty at the same time:

Retaux: "Shit will rain on us in biblical amounts. I am not interested in becoming its catchbasin." Nicolas: "The wound in my ass is barking like a pack of hounds." I don't remember which character tells another, as Jeanne's entire enterprise is beginning to unravel, "I was able to employ one more bit of skulduggery."

After a couple of hours of this mild goofballing and some eye-candy locations (the production included one day of shooting at the honest-to-Pete Palace of Versailles), "The Affair of the Necklace" concludes with powerful and nearly wordless scenes in which Jeanne and Marie Antoinette face their respective fates. At first I wondered if Shyer was pulling something genuine from the fire at the last second. But rolling out the tumbrels at the end of a costume drama is just tacking on a veneer of emotional intensity, like the tearful puppy-hugging moment that wraps up a sitcom episode.

Perhaps "Father of the Bride Part II" and Shyer's numerous other nitwit comedies are not groundbreaking works of cinematic art. ("Smokey and the Bandit" excepted, of course.) But anyone who sits through this great misshapen blimp of a movie will be grateful if he goes back to them and leaves the ruffled shirts and skulduggery behind. As for Hilary Swank, she can play chicks, all right. But I hope the next one she plays leaves her dirty jeans on the floor.