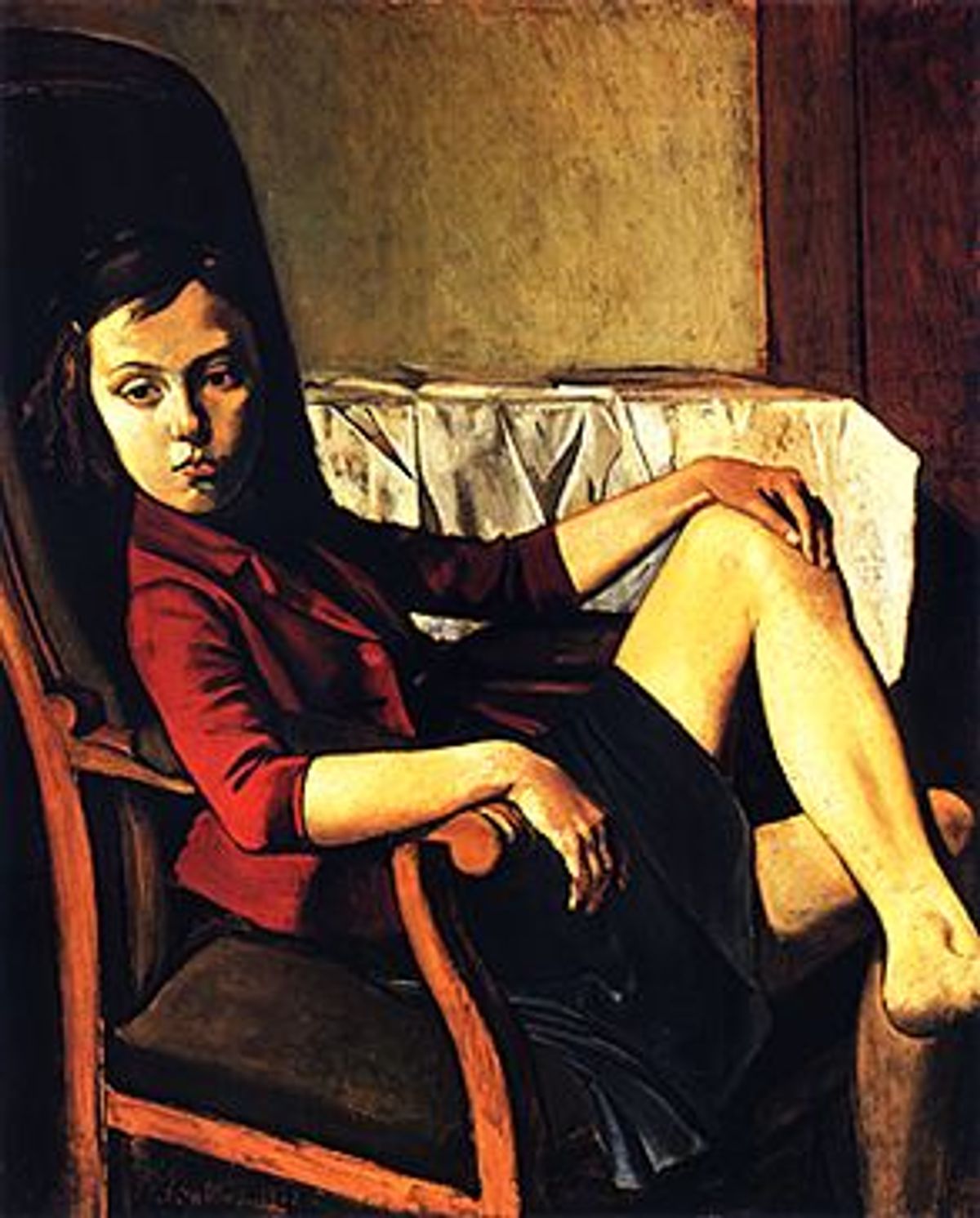 Surrounded as we are by blatant and pervasive sex, looking back at the work of Balthus can give us respite -- and a more nuanced, playful vision of eroticism.

A new book is out from Rizzoli to accompany the largest exhibit of his work (now at the Palazzo Grassi in Venice through Jan. 6, 2002) and to commemorate his death in February, 2001.

Balthus' most notorious and compelling painting, "The Guitar Lesson," is a perfect example of his vision. It presents a woman with a girl draped over her lap. The girl's skirt has ridden up to her belly as the woman pulls her hair and has her hand poised over the girl's vagina. The girl's hand is raised to pinch the woman's erect nipple.

The son of a highly cultivated family and a pupil and friend of renowned German poet Rainer Maria Rilke, Balthus arrived on the scene a young 26 at a fevered moment in the history of art. He had been a painter since he was 16, encouraged by a mother who also painted. He was also surrounded by many major cultural figures such as Rilke, who helped publish his first ink drawings in 1921, and painter Pierre Bonard, who further nurtured his talent.

As he gained his first successes as a painter in 1934, modernist art movements captivated Europe. The Bauhaus and expressionist movements had swept Germany, futurists were ardently followed by the cultural elite and future dictator Benito Mussolini in Italy, while France played host to a grand collection of artists and intellectuals like Man Ray, Picasso and Matisse. Most major artistic and creative movements in Europe were focused on defining the new and breaking from the old, classical orders that dominated 19th century culture.

The centrality of the nudity in this painting puts sex front and center, but there's also the setting of the painting: Alice stands with one foot on a chair in a bare corner brushing out her hair. For a contemporary viewer it might elicit ruminations about how women's identities are tied to their bodies or how we use nudity as a symbol for sex, but the original buyer, Pierre Jean Jouve, thought otherwise and described the painting as "having such an intense carnality, that I considered 'Alice' as being my companion."

But Balthus plays a two-front game. He's not merely concerned with carnality but with an exquisite form or vehicle for that eroticism. Despite his comments about "The Guitar Lesson" he also made other, more accommodating remarks that demonstrate his keen sense that his paintings' subject matter might obscure the grace of their execution. In a letter about "Alice in the Mirror" he wrote, "I don't believe it is obscene and I think the grave, severe atmosphere it is steeped in is such that even a young girl can look at it without blushing."

It's the clothed women in Balthus' paintings that appear most erotically charged. In "Therese" a young girl stares languidly out of the canvas as her skirt slides up her thigh. A companion painting of the same model shows her sitting with eyes closed and legs open so that you can see her underwear as a cat laps milk from a bowl in the foreground.