Britney Spears is not the devil

And neither are the little girls who love her and her secret, shameful beat. 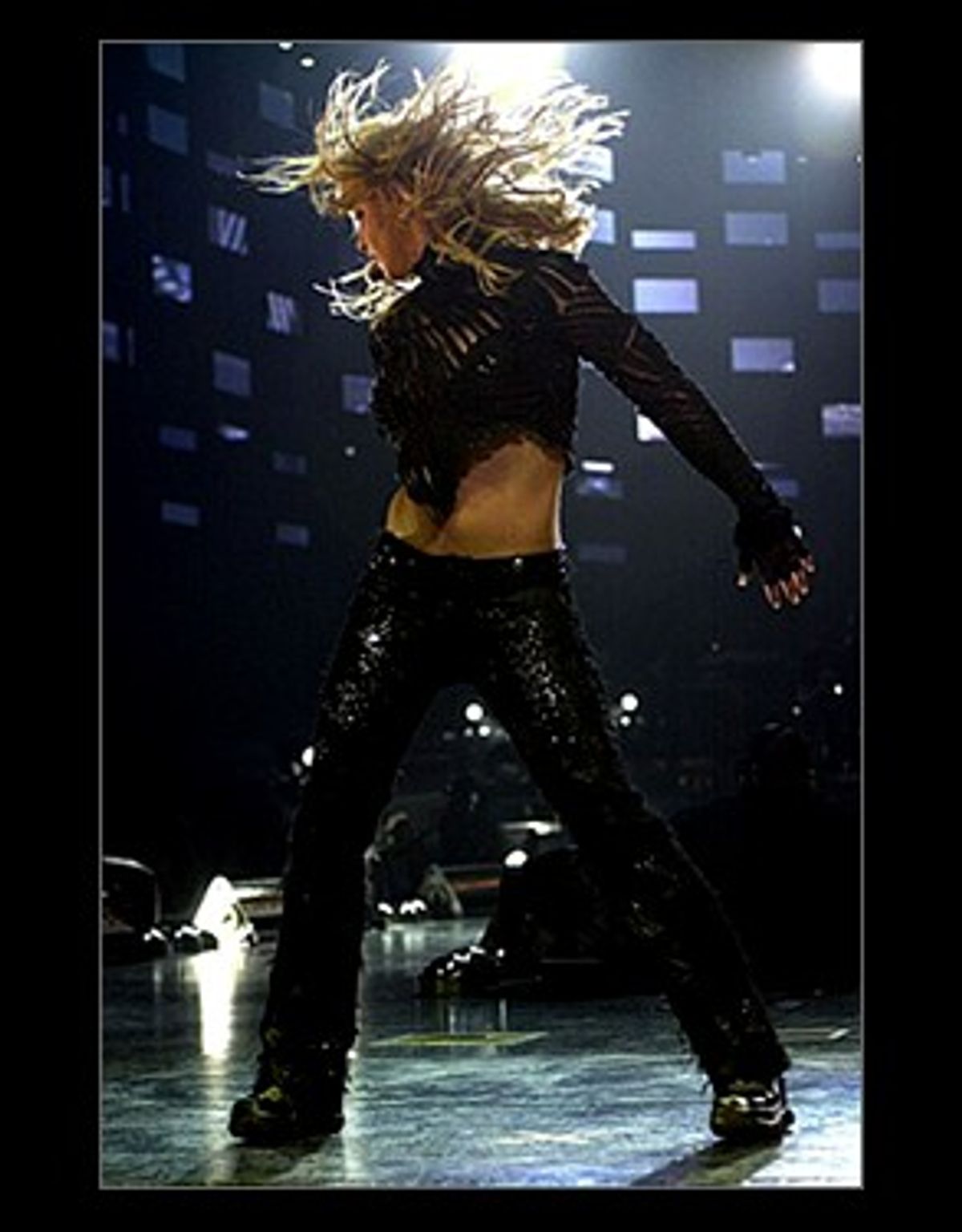 Little girls are the ones we should be worried about, people say. The ones who still grip their parents' hands, not ashamed, not afraid to ask to be walked to school, through the department stores where they will hide in racks of clothing, bursting out only when they spy something they want, must, absolutely have to have.

When it is time to go home, they will clutch their mothers' hands again and lean against their hips, sighing and breathing heavily. They are tired, and they are glad to have their mothers there.

Especially when those mothers are carrying the newest Britney Spears doll, one a future birthday present for a friend, one for now. And especially when they can go through the drive-through at McDonald's, right hands greasy from the fries and burger that they do not have to worry about eating, pressed against the window, the others gripping the Britney Spears video and CD sampler set.

These are our future, people say, shaking their own hands, cold with panic. These are the ones that are being poisoned with the idea that being Britney is the only way to be! The only way allowed! In our society today, thanks to the 20-year-old from Louisiana, a little girl is not allowed to be herself. She is only allowed to be Britney! Their hands are still shaking, their voices still fighting to be heard.

Perhaps they should eat an order of fries and listen to a Britney CD, lean against their mothers' hips and thank them for buying the Britney Spears doll.

Britney Spears is not the devil. She is a 20-year-old with golden skin and long wavy hair the color of the velour sofa that your grandmother has had forever. She has white teeth and a belly ring with real diamonds that probably cost more than your car. A flat stomach and a far-from-flat chest. But no horns.

She has the perfect car, the perfect family, the perfect boyfriend who is his own God, not to mention that of legions of little girls. She and this boyfriend, with his own perfect life, are the Ken and Barbie of today. No pitchforks allowed; only Dreamhouses and matching outfits.

Her life is dissected like a specimen in a freshman biology class. Some push her away, covering their mouths and running from the room as if they cannot look at her a single second longer. Others lean forward, poking and prodding, peering into the depths of who Britney Spears really is, outside of the flat stomach and perfect life. Convinced that there is something more, something secret that they can find.

Nothing about Britney Spears is hidden, yet parents want to keep her a secret. Locked up in the closet, behind the sweaters that smell like cedar and winter weather, Britney Spears sits and smiles, dances, shakes her hips, and twitches her waist, all in time to a secret, shameful beat that pulsates throughout the house until the 5-year-old, 7-year-old, 12-year-old can't help digging through the closet, pulling her out and running into the living room.

"Look what I found!" they exclaim as the light flashes over their face. "Britney's the coolest!"

Britney is the Christmas present no parent wants to buy, but when they finally relent? There are none left on the shelves, and they have to make do with something else.

"Maybe next year, honey," they say, handing her a CD by someone else, someone with blond hair and a flat stomach, secretly hoping that by next year, Britney Spears will be in the dollar bin at the local outlet center.

But she is still around, still smiling with those big, ivory teeth that make people cringe, pulling on their sunglasses and announcing the fakeness of it all. She laughs and dances on national television, over and over again as if someone forgot to turn the key to make it all stop.

"Britney goes shopping!" the newscasters announce with a chuckle, wrenching their own necks so that they can watch the biggest story since "Britney bought slippers!"

Britney Spears is still around, and everyone still wants one.

The little girls have given up the Britney dolls. Now they ask for the matching outfits, the sunglasses with the rhinestone hearts in the corner that glint and flash as they wink and jut their hips. Platform shoes that send their lanky bodies shooting into the sky. Bucketloads of glitter, rhinestones, flash and fancy. Sing-a-long Britney is in, so they pay portions of their college education to see her live. "She looks even prettier in person!" they yell, throats hoarse and the parents who are still around wonder about the last time they heard such an observation.

Half of New York City is gone, left for memories and tribute shows. Nothing is normal anymore, and so why should pop stars be expected to adhere to that long-forgotten code? No, she does not sing live, and yes, you wonder how long it took to apply her smile some mornings. Britney Spears is a commodity, something like Spam or Twinkies, with an indefinite shelf life, bad for kids but never out of style, never unliked by those who are supposed to be protected from her.

So what's the problem? She doesn't give your kids cavities, though some might beg to differ after watching her slur a honey-coated "Awww, you're so sweet," in response to a fan's tearful "ILOVEYOUBRITNEY!" Last I checked, you couldn't catch cancer from Britney, unlike cellphones, Diet Coke and deodorant, all staples in America's teen life today.

But Britney's side effects are much more potent. Stronger, they linger for quite some time. They make people aware of you, and that is a very bad thing. Legions of 20-year-olds with something to say have appreciation for Britney, the mascot with the balls to say it. Not to mention enough money to never regret it.

Nothing is more threatening than confidence, and perhaps that is why Britney Spears is who she is -- something besides the perfect girl whom America watches with fever. She stands for a point in all young women's lives, where they stand up and shimmy out of their parents' protective grasps. They go shopping on their own, coming home with shirts that barely cover bellies that have just now lost the pudge of youth. They learn to take care of themselves, and hopefully they learn to have pride in themselves as well. Dreams of Ken and Dreamhouses still exist, except Ken is the most popular boy in the eighth grade and the Dreamhouse is his family's rec room, dark and swimming with secrets.

It is a dangerous point, one that we don't want to admit. Growing up is never an easy thing, especially when someone like Britney is flaunting it, almost effortlessly. She knows she's a young woman with something to say, things to do and a body to move in time to a careless beat.

And for those parents who relish the feeling of their daughters' hands in theirs, the feeling of mock-relief in the "There you are!"s and "Lemonade, not Coke"s that exit their mouths, the idea of this mascot is scarier than what lurks outside, in the bushes and faces of strangers. Britney is everywhere; you cannot avoid her and yet you yearn to reject her.

The holidays are fast approaching; you can already feel the chill of want in the voices of friends and family. Seven-inch plastic Britneys with coordinating outfits and colorful boxes line the shelves and a new album cramps our airspace. Of course, it proclaims what we've all heard before. "She's not a little girl anymore," one friend told me, as we discussed the songs that have become staples of our commute to and from college classes. "And it's great, she's finally admitting that."

But for parents, it is somewhat harder. And with good reason, too. We want to hold on to everything that is normal, and children are perfect examples of things left untarnished after Sept. 11. But let them embrace Britney, for she is as normal as you can get. Just a girl shedding her skin, with 30 million people watching.

And if you don't feel comfortable letting your 8-year-old idolize a 20-year-old with $36 million in the bank, I know a few 19-and 20-year-olds with $20 in their pockets whom you could borrow for role models.