Anatomy of a disaster

In "Project Greenlight," Ben (Affleck) and Matt (Damon) spark an HBO documentary series that watches a chump get his chance at the big time. 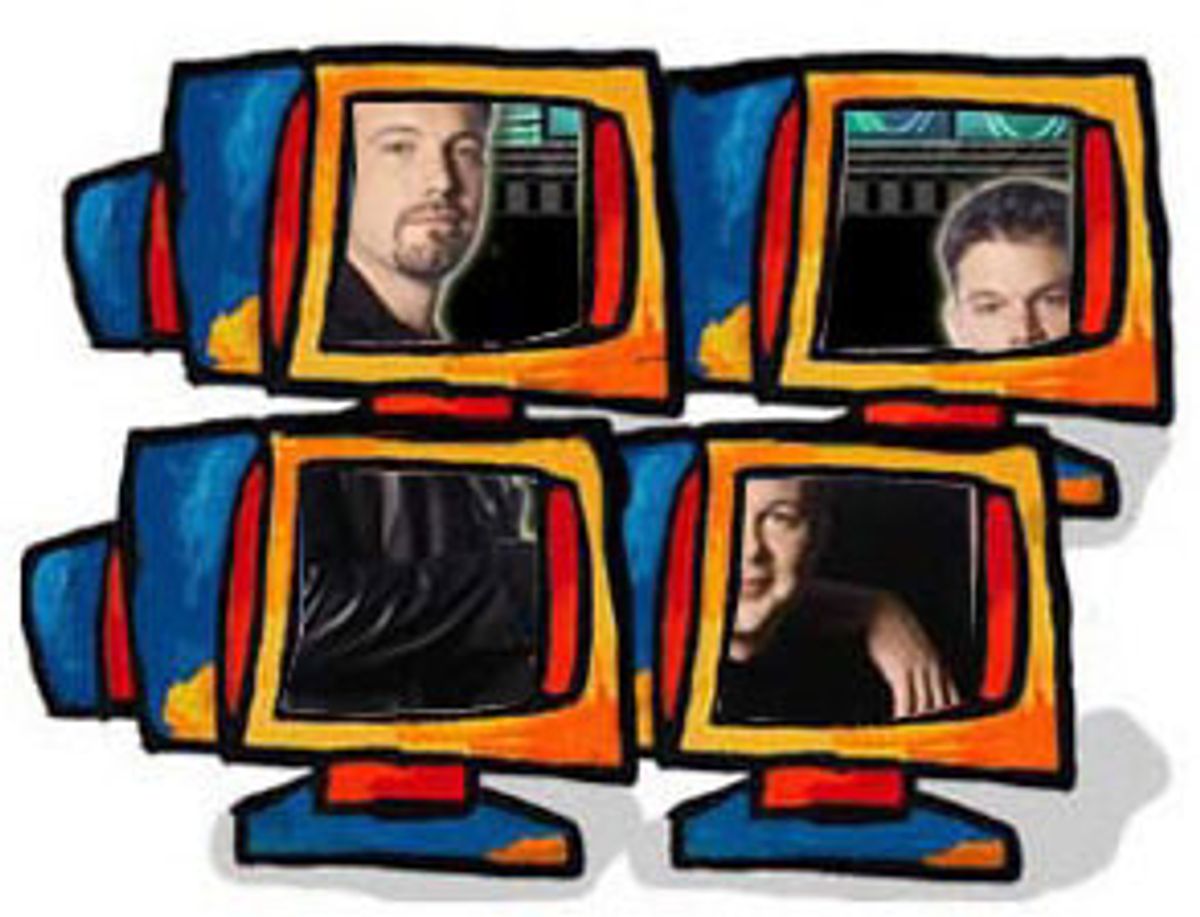 By now, everybody knows the Ben Affleck and Matt Damon story. (Cute boys write script and win Academy Award with moms in attendance; megastardom and panties in the mail ensue.) But once upon a time, Ben, Matt and "Good Will Hunting" producer Chris Moore were "just three guys, trying to break in, [feeling] like you had to have some secret key to the kingdom."

Now, roughly 40 movies among them later, they have set out to give "some smart, talented person" the same chance they were given. (Or, as a friend of mine puts it, "the chance to get a lot of people to rewrite what you've written.")

On Sunday night, HBO aired the first two episodes of what promises to be a riveting (to Hollywood geeks like me, at least) 12-episode documentary series called "Project Greenlight," which will document the adventures of a bumbling novice director as he sets out to make a movie of his own script with a million dollars of Miramax's money and the powerful patronage of our two Oscar-toting heroes.

The result demonstrates that there's nothing more enjoyable than the crashing failure of a hubristic chump.

The show is overseen by Miramax, HBO and LivePlanet, which is Affleck, Damon and Moore's production company. Along with their scripts, 10,000 aspiring auteurs -- including a mortgage loan processor, a Dallas Cowboys cheerleader, a postal worker and a burping man -- submitted biography videos demonstrating the stunning array of senseless acts that can be perpetrated with a video camera. "Greenlight's" hopefuls are eventually winnowed down to 10 and flown to Los Angeles.

In the first show, Damon, Affleck, Moore, four top Miramax executives and an HBO documentary crew (What the hell, who would you pick?) spend seven grueling hours debating the relative -- and they are relative -- merits of each of the scripts and sample videos. Idealistic Damon protests that the winner should be "the best director with the best script" -- a crazy idea that just might work. But greenlighting a project is never that simple, and after hours of deliberation, the keys to the kingdom are tossed to a flame-cheeked former insurance salesman from Chicago, an unlikely Cinderfella named Pete Jones, "the guy that'll never get the chance unless you give it to him," in the words of the sound man.

Jones' story is a syrupy sundae with rainbow sprinkles about a little Catholic boy and a little Jewish boy, one of whom dies of cancer. "Stolen Summer," which will be released in March and will star Aidan Quinn, Brian Dennehy and Bonnie Hunt, sounds like a real must-miss.

But the HBO series documenting the creation of this mess holds all the grisly promise of a 10-car pileup. "It may be a grand catastrophe and a terrible failure," says Affleck of the movie-in-progress, "which is part of the fun." If the first few episodes of "Project Greenlight" are any indication, however, grand catastrophe and terrible failure will be all the fun of the documentary.

Though clearly not the best at anything, Jones has a certain "passion" that Miramax responds to. Passion in this context means blurting out incredibly stupid and therefore highly entertaining things. Like this, to four slack-jawed studio executives and two gaping movie stars: "It's about you guys screwing the studio system and saying let's make the best film. Market the film? Fuck you. Who cares? We're making the best film. We're putting out a million bucks. I don't have a million bucks, but studios have some money and a million-dollar budget is not going to crush them."

As Jon Gordon, the increasingly beleaguered executive V.P. of production at Miramax, points out a few episodes later (once Jones' "passion" has started to become problematic), "This is not like putting on a little play in your backyard."

From the very first, Jones shows his inexperience and general lack of a clue. During the first production meeting, Moore has to remind him -- twice -- to take notes. Preparing for a meeting with "Clerks" director Kevin Smith, Jones says, "I need to know from Kevin Smith, A) How did he do it on no budget, B) How did he compromise what shots, and C) How do you deal with Miramax?"

There are some people who are allowed to complain about studio politics and call a million-dollar movie a "no budget" movie; Jones is not one of them. (Smith's semi-serious reaction: "They're letting him make a movie and already he's got a gripe! Usually you wait until your second movie bombs.") Jones manages to remain blissfully ignorant of the finer points of both politics and production, but our boy goes Hollywood quicker than you can say Don Simpson. Within a week, he is name-dropping to his wife. ("Hi, Babe, I'm still not out of here. I've got to write a letter to Sean Penn." Babe's underwhelmed response: "OK.")

When things don't go his way, he sarcastically condescends to a studio executive (overestimating her place in the Miramax food chain and underestimating her place in relation to him); questions Harvey Weinstein's general business acumen ("It's a weird way to run a company"); and petulantly wonders why Emma Thompson hasn't called him back the day after receiving his script.

"We didn't hear anything from Emma," Jones frets.

"I don't belong to that philosophy."

"You think she wants to read your script tonight? That she got it and she can't wait? She's Emma Thompson, man."

"I still don't understand why she didn't call me."

Of course, by now, we do. In the third episode, the discussion over the budget with Miramax heats up, as Pete insists on shooting on location in Chicago and setting the film in 1976, bumping up the budget to $1.5 million and planting a blooming minefield of technical difficulties for himself down the road. "This is Sophie's Choice," he says of his budget-inflating creative choices. "I need them both. Miramax, you have to understand that."

Around him, doubts bloom. "Pete is getting a tremendous opportunity," Miramax's Gordon points out grimly. "All of a sudden, to be consistently whining that the process is not to his liking? Two months ago he would have had to pack up and go back to Chicago. We're not a bank." (There are hints along the way that Miramax was concerned about being portrayed as somehow disruptive to the creative process; but "Project Greenlight" has the distinction of perhaps being the first movie about making movies in which the studio comes across as the good guy, at least for now.)

My favorite moment so far occurs when Jeff Balis, a co-producer at LivePlanet, attempts to give Pete notes on his script. Balis, who is Jewish, is concerned about a particular line in the script.

Balis: "It's a little heavy-handed."

"That line," Jones sighs, "has moved more people than any other line in the script."

Balis frowns. "Pete says to the Rabbi, 'Rabbi, if Jewish people are uncomfortable praying to Jesus because they're uncomfortable with the name Jesus, then why don't you just come up with your own name to represent the good that Jesus does?"

Balis looks at Jones blankly, pausing before reading the next line. The camera pans over to a copy of "The Complete Idiot's Guide to Understanding Judaism," which happens to be nearby.

"'Instead of praying to Jesus, they should pray to Danny,'" Balis reads, a note of incredulity in his voice.

"You guys don't like the term 'Jesus,' so let's call him something else."

"OK, now that you've explained it, I definitely don't understand."

That Jones' script was chosen among 10,000 others probably says more about the quality of material available to "Project Greenlight's" producers than about the caliber of the winner's work. Then again, Damon has remarked that he hoped the documentary would have the feel of "Burden of Dreams" (Les Blank's documentary about the making of Werner Herzog's "Fitzcarraldo") or "Hearts of Darkness" (Eleanor Coppola's documentary about the making of "Apocalypse Now") -- so maybe it says even more about our boys' perverse sense of humor.

"Burden of Dreams" and "Hearts of Darkness" documented what happens to great, ambitious filmmakers when they take on Herculean projects in far-off, war-torn, disease-ridden and otherwise hostile jungles: They lose their marbles and give great documentary footage. Pete Jones' little movie is not set in the jungle and it won't require negotiating with the Philippine government or dragging a steamship from river to river across land, killing a few natives in the process. It is, however, a period piece starring two 8-year-olds that will be shot on location.

Basically, it will be more expensive, more complicated and will involve more red tape than Jones could have ever bargained for. Jones, as you may have already surmised, is no Herzog. He is no Coppola. He is not even anything resembling an Affleck-Damon tag team (a team that has jumped considerably in my estimation not only for being funny, charming and smart, but for exhibiting the foresight and humor to embrace the purpose-defeating Jones compromise with gallantry and equanimity -- so far). In other words, he can still do a lot of damage on very little. Which is great news.

In his (apparently mostly fictional) autobiography, "Kinski Uncut," Klaus Kinski compares his experiences in making "Fitzcarraldo" (a movie about a genius-madman committing a great folly, which was, in itself, a great folly committed by a genius madman) to his experiences working on Herzog's "Aguirre, Wrath of God" (see above). "Once again, our lives are constantly put at risk because of Herzog's total ignorance, narrow-mindedness, arrogance, and inconsideration, which threaten to bring about the collapse of the shooting and the financing ... He's the same decaying garbage heap that he was ten years ago -- only more moronic, more mindless, more murderous ... He's also hired Les Blank, a so-called documentary filmmaker, who thinks of nothing but food."

In their own way, the "Project Greenlight" decision-makers might have been thinking of food themselves -- a plump morsel called Pete Jones, who should do a great job of satiating the sharks.