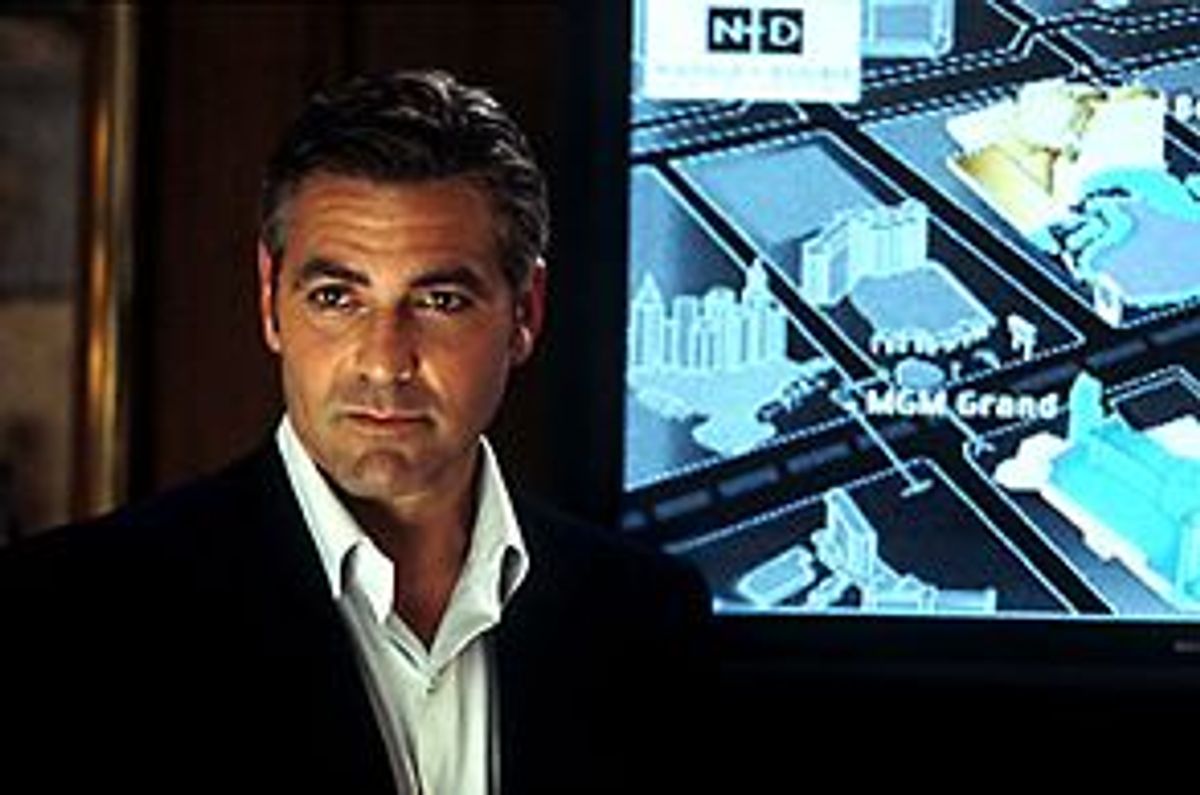 The north and south of Steven Soderbergh's sharply creased and polished heist movie "Ocean's Eleven" are represented by two actors -- one the star and the other a minor player only in terms of the number of lines he gets.

George Clooney, as smoothie thief Daniel Ocean, is a movie star in every sense of the word. He carries the picture in his breast pocket: You look for his face when you feel the plot getting a little too busy or too slick.

Elliott Gould, in a much smaller role as an old-style casino owner fallen on semihard times, is Clooney's polar opposite, but he's just as essential to the movie. Clooney is all controlled class, delivered with a devilish wink; Gould throws off energy in reckless, fiery pinwheels, as if he's rigged his performance to blow up the camera instead of make love to it. Together, they threaten to sneak off with the movie when Soderbergh isn't looking, sowing madness and sex appeal in their wake.

But Soderbergh keeps control by ceding it: He maintains a careful rein on the tightly worked plot -- a story about classy rapscallions who set out to rob a trio of casinos -- without ever tightening the noose on his actors. "Ocean's Eleven" works because it has a light, swinging feel; you're less likely to notice if the story is a little jagged in places because the tone is so even and smooth.

Soderbergh has become one of our most sure-footed directors. Last year's "Erin Brockovich" had an easygoing facility, like a '40s women's soaper. As such, it was far more enjoyable than the artfully sliced-and-diced but stiff and mechanical "Traffic," widely praised as the superior movie of the two. And in terms of structure and style, both "The Limey" (1999) and "Out of Sight" (1998) were much better movies.

At the very least, though -- and among his later movies, "Traffic" may be the one exception -- Soderbergh isn't the kind of director to let his filmmaking style get in the way of our movie watching. And he knows how to guide actors toward their easiest, most natural rhythms -- or, perhaps more accurately, he gives them the space to find them.

Soderbergh's "Ocean's Eleven" is a remake of Lewis Milestone's 1960 heist comedy "Ocean's 11," starring Frank Sinatra, Dean Martin, Sammy Davis Jr. and Angie Dickinson. But this version is more like a real movie in which actors are allowed to attempt to act -- not just an occasion for a group of martini-guzzling hipsters to goof around in front of the camera. If the first "Ocean's Eleven" was a decent idea that fell flat in the execution, this time around there's a breezy stylishness to the filmmaking that seems true to at least the intent of the original. One of the only problems, however, is that there are so many guys on "Ocean'"s team that only a few of them are delineated as well as they should be. Still, Soderbergh lets his actors have some fun.

When we first meet Danny Ocean -- it's a name you can't ignore, like Johnny Appleseed, a name with a wide-open mythology already folded right into it -- he's just been sprung from a New Jersey penitentiary. We see him sauntering out into the bright morning wearing the same clothes he came in with, a perfectly tailored black tux and loosely slung untied bow tie -- a sartorial aphrodisiac if there ever was one, especially when worn by a looker like Clooney. But then, it all depends on the woman: Ocean's estranged wife, Tess (Julia Roberts), won't have anything to do with him. She's taken up with a plasticky-cool Las Vegas casino mogul named Terry Benedict (Andy Garcia), which naturally plays no part whatsoever in Ocean's resolution that he must tap into Benedict's stash.

Ocean hooks up with old pal and cardsharp Rusty Ryan (Brad Pitt, in a loose-limbed, enjoyable performance), and with the help of their financial backer Reuben Tishkoff (Gould), the two put together a team to help them bring off their near-impossible scheme: Raid the vaults containing the spoils reaped by the MGM Grand, the Bellagio and the Mirage, all of which Benedict owns.

The team Ryan and Ocean assemble seems capable of getting the job done: It's just that not all 11 actors get a chance to make even a small mark on the movie. Soderbergh doesn't pull off the trick -- admittedly difficult to do without bogging down the story -- of making each one distinct and memorable. The getaway guys played by Casey Affleck and Scott Caan, the surveillance specialist played by Eddie Jemison and (most surprisingly, considering his big-star status) Matt Damon as a junior grifter all practically fade into the background by the end.

Bernie Mac as a crooked card dealer and Don Cheadle as an explosives expert fare better. (Cheadle's character, a Cockney, pulls off a cheeky bit of rhyming slang in a nod to Terence Stamp in "The Limey." "We're in Barney," he tells his compatriots. And if you can't figure it out, you'll just have to see the movie.) Shaobo Qin plays a foul-mouthed, diminutive Chinese acrobat who can squeak into tight places: He registers on-screen with just a few lines and a handful of rolls and tumbles.

And Carl Reiner as Saul Bloom, an old-time flimflammer who's been lured out of retirement for one last go-round, barely has to talk to make us laugh, but then, talking never hurts: The fake identity he concocts is a big-business tycoon, from an imaginary nation, named Lyman Zerga, and he rolls the name around on his tongue like a melting pat of butter.

Roberts looks fabulous as the elusive Tess: In a movie like "Ocean's Eleven," the chief benefit of playing a character with a rich, unprincipled boyfriend is that you get to wear lots of jewels and well-cut dress-and-coat combos, which Roberts carries off beautifully. Her scenes with Clooney have a satisfying crackle; the one problem is that there aren't enough of them.

Clooney has already proved himself to be a fine actor as well as a matinee idol. (His fine work on "ER" notwithstanding, he's been terrific in pictures like "Three Kings," and has even managed to give nicely shaped performances in stinkers like "One Fine Day.") That said, "Ocean's Eleven" doesn't demand much of Clooney as an actor; he freestyles his way through it, and it's exactly the right approach. He's playing a personality more than a fully fleshed-out character, but that doesn't make him any less compelling.

You can't get to the heart of Clooney's charm just by examining his facial features (the elfin curves of his smile, eyes that sometimes look half-awake and hyperaware at the same time) or even his carelessly sexy way of slinging a line. His carriage alone makes him a presence: I can't think of an actor since Cary Grant whose gait seemed so much a trademark, and yet so indefinable. (If you could define it, you could copy it -- and it can't be Xeroxed.)

When Clooney showed up in an early scene, cruising through an Atlantic City casino in a trimly tailored checked sports coat, the decidedly straight male friend next to me said with a sigh, "OK, I'm gay" (a statement he rescinded as soon as Clooney left the screen). All great stars resonate with members of their own sex, and I'm not talking about something as simple-minded as guys' wanting to be John Wayne -- although that's part of it. Clooney isn't merely appealing in the sense that he forces even men's men to admit, grudgingly, that they enjoy watching him; he grabs them, with a friendly punch on the shoulder, so quickly that they can barely figure out what's happened, and after that, they're helplessly hooked. To claim it has anything to do with sexual orientation or latent desires is to grossly oversimplify it: Clooney's appeal is so elemental that it invites you to laugh at how snookered you feel. And yet once you ease into the truth of it, you realize that it isn't hucksterism; it's the real deal.

No matter what missteps Soderbergh makes in the future, I'll always be grateful to him for balancing George Clooney with Elliott Gould, an often-forgotten actor who, even at his loopiest, taps depths that not many others can match. Gould has never seemed quite of this world; he's too funny-sad to ever completely fit in with the rest of us. That's what makes his portrayal of Philip Marlowe in "The Long Goodbye" (1973) resonate.

Gould doesn't have much to do here, but he makes the most of it -- even if you don't see him on-screen much, he leaves the theater with you. His Reuben Tishkoff is the kind of guy who spends his days perpetually lounging around his pool, dressed in bodacious silk robe-and-shorts ensembles, a mass of gold gewgaws hanging around his neck and nestling into the curly thicket of his chest. Gould's Reuben is both scattered and sharp, the kind of guy who could easily make it in the old Vegas, where personalities counted, but can't hold it together in the new one, where it's all about deal making and back stabbing.

His loyalties run deep -- they're just a little circuitous along the way. When Danny and Rusty approach him for help in their scheme, he hesitates, mumbling and muttering that the plan is too insane to work. But then he comes around. "I owe you for the thing with the guy at the place," Gould says, explaining everything by explaining nothing. It's a line that may have come from the movie's chief screenwriter, Ted Griffin, but it's all Gould -- as if he'd gone deep into the Gould galaxy to find the exact reason Reuben would agree to help his old pals.

And it's the movie's most perfect moment, the instant you realize that traditional logic is sometimes important but often highly overrated. The meaning of the movies, if not of life, is to be able to recognize when talented actors are reading interplanetary signals and channeling them back to us in a way we can understand. Those signals can be as deceptively simple as the way a fellow carries himself in a great sportcoat, or the goofily flat-footed amble of a 60-ish guy decked out in wild lounge wear. The magnetism of the actor is what really counts, because in the end, it's the thing that gets the message across.