A pox on pro-lifers 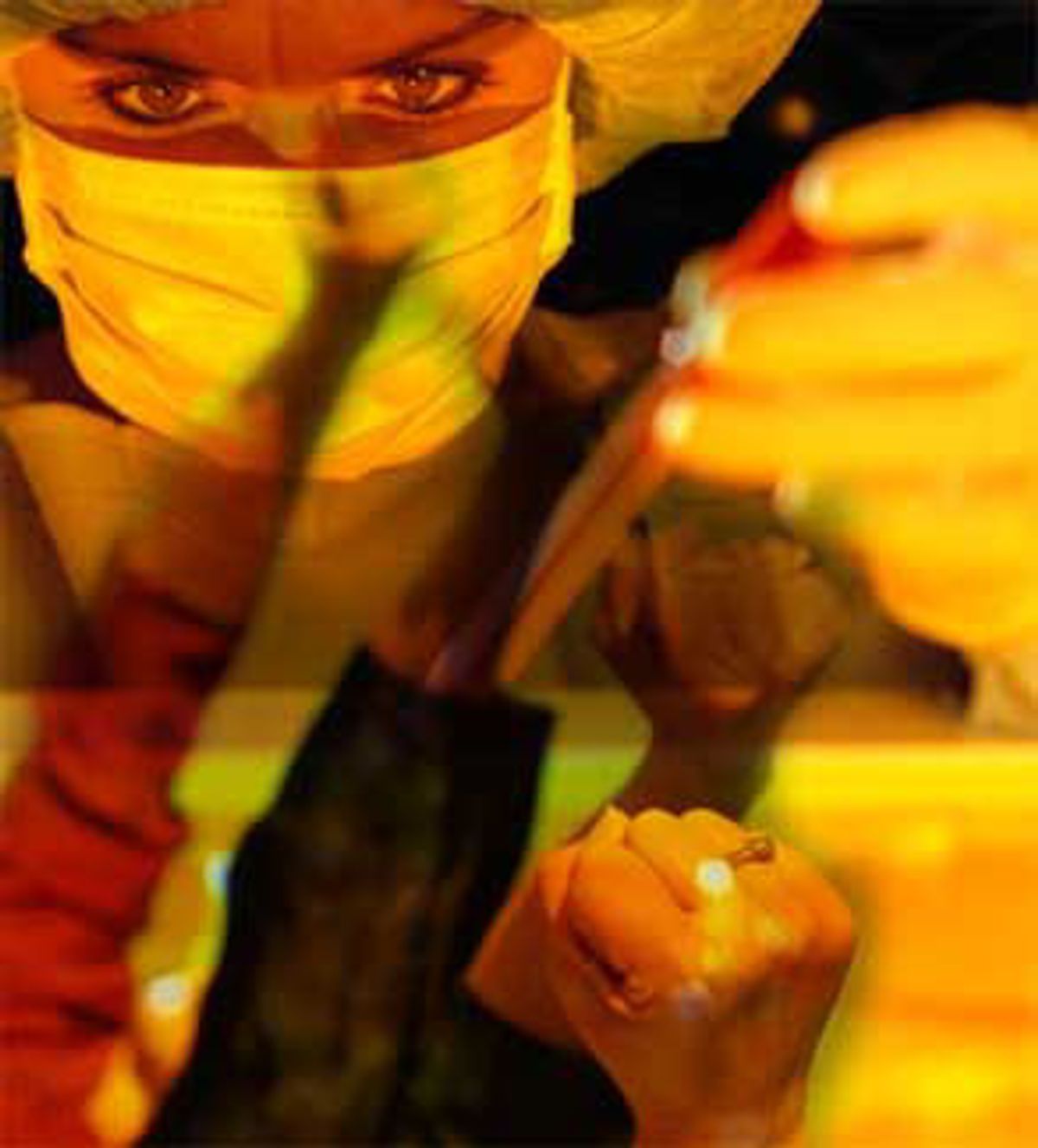 Imagine the following future scenario: Terrorists simultaneously release an aerosolized form of the variola virus, which causes smallpox, in five major U.S. cities. The attack deliberately targets low-income neighborhoods, so surveillance efforts prove lacking, and the infection has ample time to spread before the government catches on.

With the death toll mounting, President Bush announces an emergency inoculation of the entire U.S. population, using nearly 300 million doses of smallpox vaccine prudently stockpiled by the administration in the year and a half following the Sept. 11 terrorist attacks. But almost immediately, scores of pro-life Protestants and Catholics protest that they would rather die than be injected with a "tainted" vaccine  and threaten to launch a particularly gruesome form of civil disobedience.

Some pro-lifers have floated the idea of just such a demonstration ever since learning that the British firm Acambis Inc., which recently secured two hefty deals with the U.S. government to prepare smallpox vaccines, plans to use the MRC-5 cell line as a substrate to make 54 million doses, the amount required by its first contract (the second batch will use a different substrate). What makes MRC-5 so controversial? According to a 1970 article in the British journal Nature, the cell line was originally derived in 1966 from the lung tissues of a male fetus "removed for psychiatric reasons from a 27-year-old woman." In other words, MRC-5 was created from an abortion. Thus, the use of it suddenly links the issue of bioterror preparedness to the question of fetal tissue research -- and, inevitably, abortion politics.

The antiabortion group Children of God for Life has led the charge, seizing on a "24-hour on-line poll" conducted by the conservative Web site WorldNetDaily.com that showed "56% of the 3,335 respondents said they would refuse the vaccine if it used aborted fetal tissue." Internet polls, of course, are notoriously susceptible to the efforts of well-coordinated interest groups. And it's one thing to click through a Web poll and another to spurn a vaccine that could prevent an excruciating death. "I actually would find it hard to believe that someone, an antiabortionist, would refuse vaccination on those grounds when faced with a high probability of contracting smallpox," observes Jonathan B. Tucker, a bioterrorism expert at the Center for Nonproliferation Studies in Monterey, California.

It's possible that even amid the unprecedented chaos of a nationwide vaccination, antiabortionists would get the chance to choose between offensive and less offensive vaccines. But the fact remains that at least some Christian conservatives say they would seriously consider boycotting any vaccine that uses the MRC-5 cell line. Carrie Gordon Earll, the bioethics analyst for Focus on the Family, has said that Acambis's vaccine derives from a "tainted source." On a discussion thread about the vaccine on the populist conservative Web site FreeRepublic.com, one poster added, "If a smallpox vaccine is made from this material (I can't even say it) then I would reject the vaccine." More important, Children of God for Life's political tactics include promoting a "Campaign for Ethical Vaccines," and calling on followers to send a drafted letter to Health and Human Services Secretary Tommy Thompson and Centers for Disease Control director Jeffrey P. Koplan.

Religious groups have long protested the use of vaccinations because of their controversial origins. In Arkansas, a woman is suing to exempt her children from chickenpox inoculation because she claims the vaccine was also prepared from the MRC-5 cell line, as well as another abortion-derived line known as WI-38. But from an ethical standpoint, it's curious that anti-abortionists don't seem to have considered that smallpox vaccine might present a unique case.

"Smallpox is a contagious and communicable disease that threatens everybody," notes Ronald M. Green, director of the Ethics Institute at Dartmouth College. By refusing to be vaccinated for smallpox, you could not only kill yourself but infect others with what is arguably the most horrible plague known to mankind. Antivaccine Christians frequently cite Catholic theology and ethics in order to argue that they shouldn't take any action that renders them "morally complicit" with abortion, but shouldn't they also be worried about abetting the transmission of smallpox itself?

"Moral complicity" is a trendy religio-bioethical concept at the moment, thanks to President Bush's August compromise on stem cell research. Influenced by his bioethics adviser Leon Kass, Bush stipulated that surplus human embryos that have already been destroyed can be mined for stem cells, but no new embryos may be created for the purpose of research because moral complicity would ensue. But as Green notes, the same logic surely ought to apply to the use of MRC-5: With respect to the 1966 abortion that led to the creation of the cell line, "nothing is going to change the fact that this was already done."

Objections to Acambis's vaccine also take little account of the urgent need for new approaches to manufacturing smallpox vaccine. The Christian conservative thinker Marvin Olasky (Bush's guru on "compassionate conservatism") has denounced the World Health Organization's campaign to eradicate smallpoxresulting in our current increased vulnerability to the diseaseas the product of a liberal "faith in man's abilities to move us toward utopia." Today's health concerns greatly outweigh any religious objections to the old vaccine, now in dwindling supply, that was commonly used to inoculate schoolchildren in this country until the early 1970s. Known as Wyeth Dryvax after Wyeth Laboratories, which stopped making it in 1975, the vaccine was produced through infecting calves with cowpox virus (which Edward Jenner demonstrated in 1796 could inoculate humans against smallpox).

After the virus showed its symptoms, the animals were slaughtered and the pustular lesions on their bellies were scraped off and freeze-dried. But in a recent paper in the CDC publication Emerging Infectious Diseases titled "Developing New Smallpox Vaccines," the authors observe that "this harvesting method  is prone to contamination with bacteria and other adventitious agents." A well-known and widely used cellular substrate such as MRC-5, note the authors, would not only avoid contamination risks because animals wouldn't have to be used but could greatly speed up the review process. The FDA has already licensed other vaccines prepared in MRC-5 cells -- no mean consideration when we're urgently trying to guard against a smallpox attack. (In the event of an attack, such urgency would also militate against antiabortionist attempts to pick and choose which vaccines they will and won't take.)

All these considerations make the prospect of a smallpox vaccine boycott appear shrill indeed. But then, perhaps the point was never to lay out a strong ethical case for such an action. "What the abortion debate is about at this point is not so much ethics as it is politics and symbols," observes Arthur Caplan, director of the Center for Bioethics at the University of Pennsylvania. "And it gets your attention when somebody says, 'I'd rather die of smallpox than use data tainted by the murder of fetuses.'"

Still, there's another ethical concern that ought to bother antiabortionists: If pro-lifers are killed off in large numbers by smallpox because they don't get inoculated, then who'll be left in this country to picket abortion clinics and try to prevent the murder of the unborn? Would antiabortionists not then be "morally complicit" in the severe weakening of their own movement? Faced with this dilemma, it's not difficult to imagine what side followers of Children of God for Life would have to come down on.