In defense of the original "Ocean's 11"

The remake is a marketing-driven bore. I'd rather be at Chasen's with Frank, Dino and the gang. 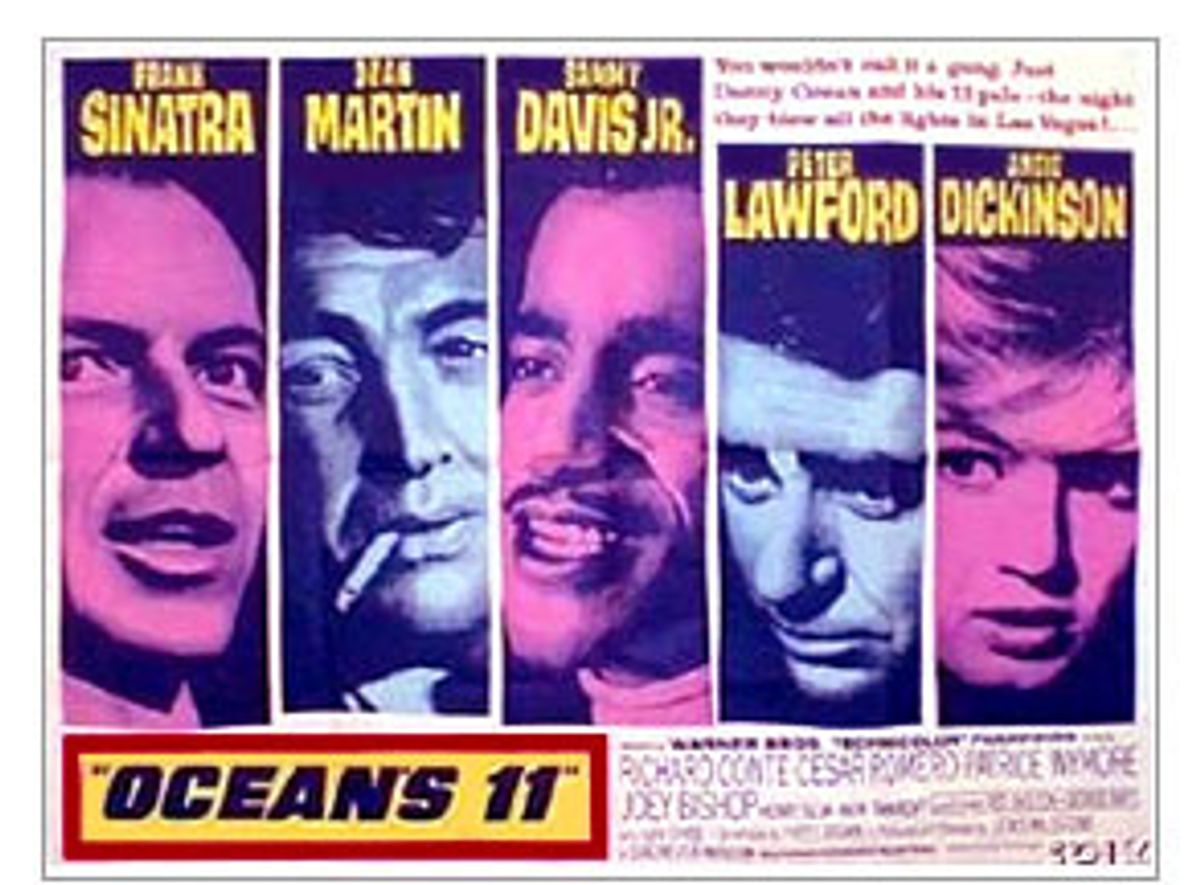 The original "Ocean's 11," from 1960, and the new one just released are so different that I had to wonder why the producers of "Ocean's" 2001 even used the same name. If it was to attract the fans of the first one, it will backfire. No fan of the old one will like the new. (And maybe, since the old fans are dying out, Warner's has the right strategy.)

The original "Ocean's" is fun, fun, fun. It was a heist caper that was just an excuse for a bunch of friends (Frank Sinatra, Dean Martin, Sammy Davis Jr., et al) to get together and make whoopee. They met in the capital of decadence, Las Vegas, during that precious pre-p.c. era when a man in an orange angora sweater stirring a martini could call a woman in a tight skirt and pumps a "great broad" and she'd take it as a compliment.

The new version is dumb, dumb, dumb. It's a heist caper that was an excuse for a bunch of highly paid actors (George Clooney, Brad Pitt, Julia Roberts, et al.) to get together and make big box office. It was made in the post-p.c. era when a man in a badly fitting suit can't say anything witty or clever in a movie because 12 people on some team have to OK the script based on its appeal to 13-year-old boys and whether it will offend some special-interest group.

The original was a classic gather-the-posse buddy movie. The guys had bonded as paratroopers in World War II and then come together for another mission. Each has a personal reason to pull the heist: One wants to get his wife out of stripping, one is dying of cancer and needs to pay his kid's way through college, another wants to play baseball but is forced to drive a garbage truck because he's black -- he wants to buy his way out of his life.

The new film gives us no background on the relationships among the men and no motivations except greed. There's a moment in the Sinatra film when his character says, quite offhandedly, to Dean Martin: "You know, sometimes I think the only reason I got into this caper was to see you again." I don't think there is one line showing friendship in the new film. Sure, the Clooney character says he's doing it to get Julia back, but the way he does it is so mean it chills the spine.

The old movie has a clever plot with a caper so low-tech it's almost believable that it could have been pulled off. The five casinos are along the strip. The men will douse the lights during a New Year's celebration, hit the casinos and split with the cash in a garbage truck. The new version has the men steal a huge electronic device from a lab; it's supposed to send out radiation to out the lights. Their getaway vehicle would be impossible to steal. It's so outrageous it's a cartoon.

The cast in 1960, led by Frank Sinatra, is so overloaded with talent that just watching them shoot their French cuffs is compelling. By this time Sinatra was the top singer in the universe and had won an Academy Award for his role as Maggio in "From Here to Eternity." He was also a great lounge singer and all-round cultural icon. Dean Martin had his own insouciant style as a singer and actor and was one of the few men Sinatra idolized. And Sammy Davis Jr. had been singing and dancing in vaudeville since he was born. (People say he was the "mascot" and criticize the group for making racist jokes. But it was Sinatra who told the casino and club owners across the country: If Sammy isn't allowed in the front door with us, I walk.)

And that's just the top three. Shirley MacLaine makes a great, nonbilled appearance as a drunk gal who almost blows the gig, and the other Rat Pack members present -- "the Quiet Ones," like Peter Lawford and Joey Bishop -- each had a talent of their own (Bishop wrote most of the lounge act and Lawford worked with the studio on the film's editing and business ends).

The cast of the new movie was thrown together by the marketing department; the guys and gals in the original liked each other and chose to do the film because of that. They shot for short periods during the day before going onstage in Vegas together at night to perform for the likes of JFK and others who wanted to bask in their aura.

They also had that old quality, style -- something that can't be faked. Frank and Dean had a way of holding a highball glass or a cigarette -- of raising an eyebrow or cocking their heads -- that made you fix on them. They also dressed impeccably and wore shoes so perfect they looked like the soles were shined. Soderbergh's pack wear loud, ugly clothes; their shoes turn up at the toes. The only well-dressed man in the bunch is the "villain" (Andy Garcia as the club owner). They are utterly lacking in charm. One wonders if Soderbergh even saw the original and, if he did, what he was trying to do with the remake -- be boorish? I am truly at a loss to fathom what his goals were -- besides making a lot of money.

Because a director could have done the right thing. A good director would have admitted that a remake is ridiculous but then tried to show some class. Instead, the shoddy new "Ocean's" makes the admittedly slight original look Shakespearean. The original has all of those silly, old-fashioned things: a clever plot, character development, great music (by the likes of Sammy Cahn and Nelson Riddle), wonderful wardrobe by Theoni Aldridge and titles by the genius Saul Bass, a clear narrative, heart and a surprise ending worthy of O. Henry. The new film has none of the above; it's either boring or confusing from the first moment. (The only scenes of any interest at all are the ones with Carl Reiner, Elliott Gould and Andy Garcia -- who play real characters, instead of themselves.)

What Soderbergh seems to have forgotten is that we want to like the characters in our movies. In the 1960 version, each of the 11 guys has a passion the audience is let in on; we have empathy for them. The leader of the pack, Danny Ocean, is in love with his estranged wife, played by Angie Dickinson. But he is also in love with danger. He led his men in the war and has become addicted to risk. She knows it, he knows it. He can't change and she is sad, but understanding. There's an amazing scene where a woman Ocean has once picked up gets jealous and calls Angie Dickinson to rat on him. Dickinson tells her that if someone is that much of a snake to her husband it makes her love him even more.

This loyalty is also palpable among the men. Ocean's pal Sam (Dean Martin) is his best friend. Ocean saved his life and nothing else need be said. What we know is that for these men it's not about greed. It's about keeping the band of brothers alive, and for some it's about helping someone else. And these men, so maligned as misogynist in real life and on-screen, play it cool but all have women they truly care about. When Vince (Buddy Lester), whose wife is a stripper, agrees to join the caper to buy her way out he asks, "What should I tell my wife?" Sinatra says, "Tell her you love her."

I don't think the word "love" is in the new movie.

And that is my main complaint about the new "Ocean's Eleven" -- and pop culture in general right now. Cynical, shallow, mindless action is held in high regard for some reason (because it's safe from real emotion?), and real talent isn't valued as much as a pretty face. George Clooney and Julia Roberts are our top stars for a reason. Both are all ego and self-absorption. Both have some skills and charm but no real style or depth; they get by on their smiles. Fine. But real talent and sexiness come from generosity.

The original "Ocean's 11" is a time capsule that shows us a group of people with big personalities and big talent who sometimes pissed people off while they were trying to live life by their own rules. The other is a group of mediocre talents put together by studio strategists with dollar signs in their eyes. If the criterion for friendship is whether you'd want to have dinner with someone, the new cast would be in a big brown van driving through Jack-in-the-Box. I'd rather be at Chasen's with Frank and the gang.

I guess I shouldn't be so angry at the Soderbergh mess. If Frank, Dean and Sammy are watching from a saloon in the sky -- seeing what the young whippersnapper did with $80 million vs. what they did for $2 million -- they're probably lighting another cigarette, making another drink and saying to each other, "Ain't that a kick in the head?"