All quiet on the homefront

Today's wartime propaganda suggests normalcy and consumption, a far cry from the government's campaign during World War II, which called upon Americans to completely change their way of life. 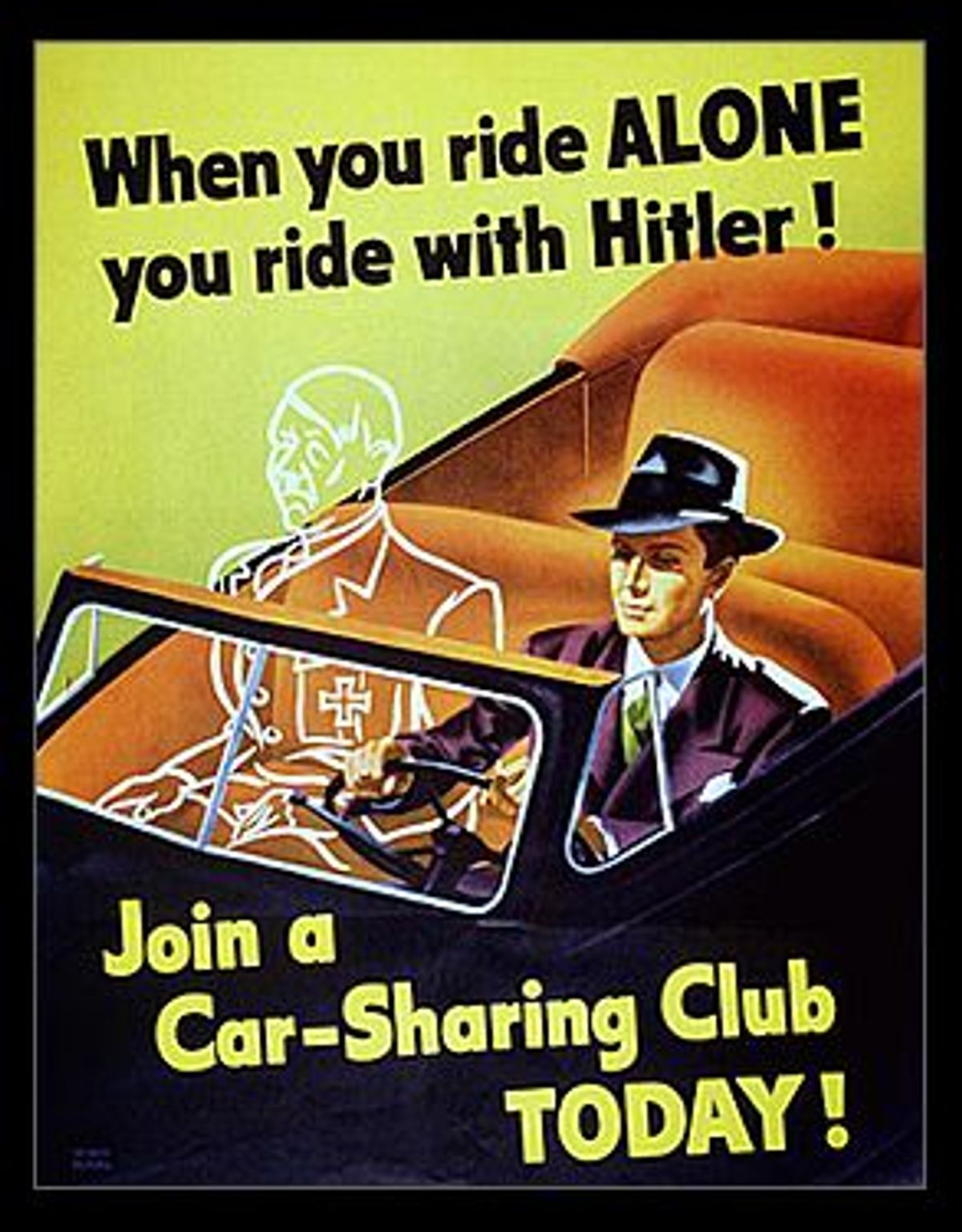 So far, America's wartime propaganda has been relentlessly innocuous. Ad exec Charlotte Beers, appointed undersecretary of state for public affairs and public diplomacy, has focused on spin rather than sacrifice, emphasizing that we are battling terrorism, not Afghanistan or Islam, and reassuring nervous Americans with a message that is both familiar and undemanding. Rather than ask for any specific action or support from civilians, the federally funded ad campaign seeks to improve national self-esteem through simple images and spare meditations on pride and normalcy. An early series of TV spots by the nonprofit Ad Council, entitled "I am an American," consists of seamless video montages of people -- either attractive, heartwarming or inspiring -- who face the camera one by one and say, "I am an American." In another series, Americans are encouraged by celebrities not to be terrified, to go on living their lives. (In one, Tommy Lasorda suggests buying tickets to a ballgame and a foot-long hot dog.)

War-related solicitations from the private sector have been similarly bland, rarely asking for much more than uniting and standing, the wearing of ribbons and the flying of flags. Even the more aggressive efforts, such as San Francisco Mayor Willie Brown's "America: Open for Business" campaign, ask not for sacrifice but self-indulgence (an open-ended shopping spree) with a grandiose excuse (avoiding recession during wartime). The image for this tremendously popular campaign, a shopping bag made with the words of the slogan, is a celebration of consumption. "The poster says to continue to do what we do -- buy things," its designer, Craig Frazier, told a reporter.

But buying things is not what we have always done, at least not in wartime. During World War II, in fact, we did exactly the opposite. For four years, ordinary Americans entered into a pact with their government, their community and themselves, vowing to do what was necessary to support our troops and win the war. It was a nationwide collaboration that transcended party lines and personal comfort. And civilian efforts -- to conserve fuel, save cans, grow vegetables, use less of everything from sugar to razor blades -- changed, at least for the period of the war, the way Americans lived.

The most striking emblem of this national commitment to sacrifice for a higher cause was the war poster. By turns humorous and gritty, government-issue World War II war posters reflect a time in American history when patriotism was at once passionate and deeply personal.

As the extraordinary outpouring of generosity that followed the Sept. 11 attacks proved, many Americans are searching for a cause that the nation can rally around. Millions of civilians already have made financial sacrifices to donate $353 million to funds for the families of rescuers who died on Sept. 11. Many remain poised to fight terrorism by any means necessary. Others are searching for inspiration. Being asked to shop more doesn't really satisfy this hunger.

So it's difficult, looking at the stirring posters of that earlier war, not to feel that our leaders are missing a historic opportunity to ask Americans to support causes that would not only produce tangible policy benefits, but would bring the nation together. A campaign asking citizens to conserve fuel, for example, would strengthen the country's position in the current engagement against terrorism and liberate America from its risky reliance on foreign oil -- while helping restore a civic culture that is increasingly frayed.

Without a world war and a full national mobilization, it is unlikely that the nation's leaders will call for Americans to do any more than remain calm. But the posters from the civilian war effort that transformed the nation 60 years ago remain fascinating and inspiring -- proof that ordinary people, when asked to sacrifice in a time of crisis, will heed the call.