The secret history of Mr. Happy

"A Mind of Its Own" author David M. Friedman chats about the long, uncut history of the penis. 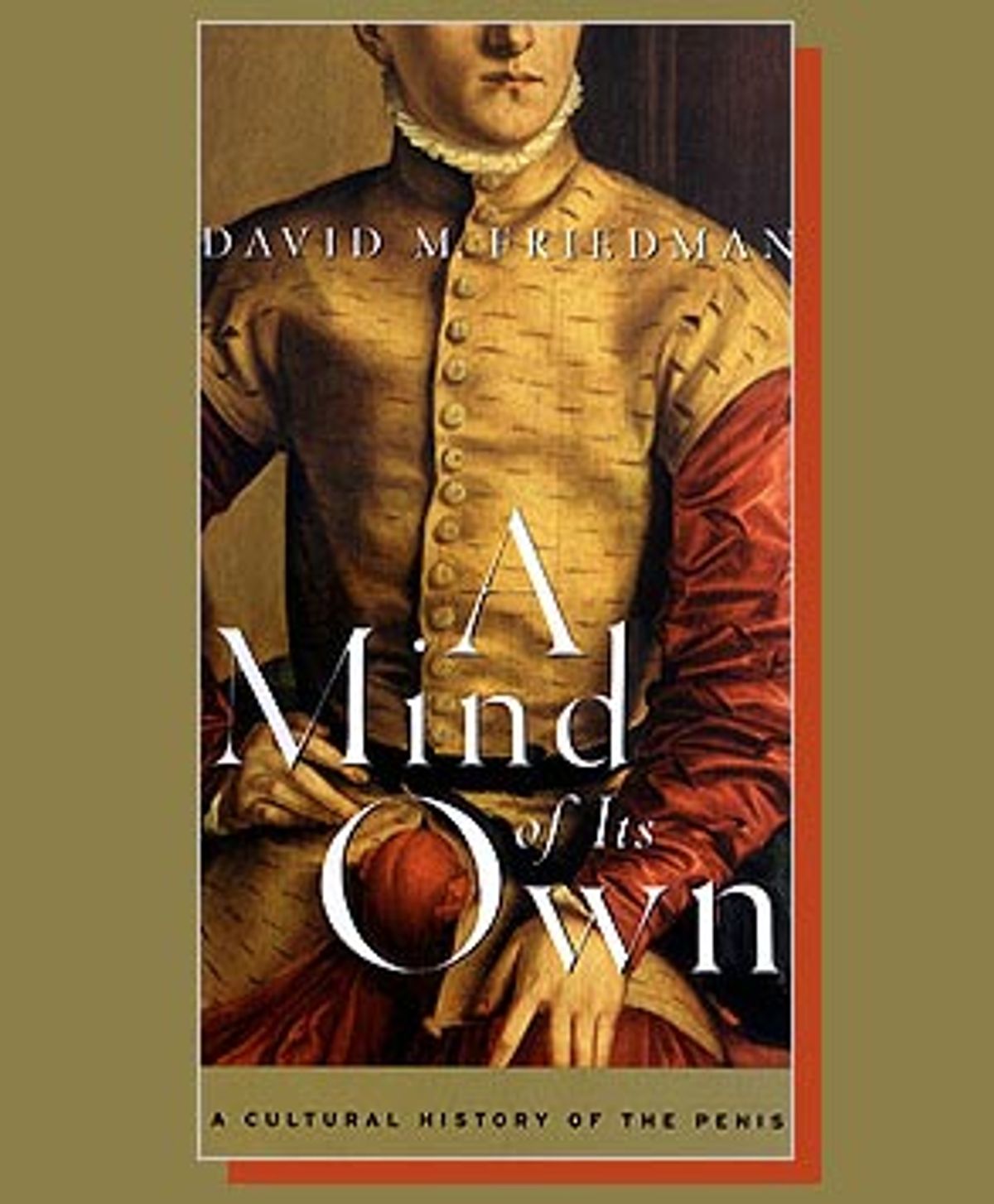 David M. Friedman peered down at his lap and pondered his Leaning Tower of Pisa. His personal Freudian cigar. Yes, his erect penis. He won't reveal how big or fat it was or wasn't. But he will tell us that the damn thing had been hard for three long hours. A doctor had done this -- a "prominent" New York urologist. He gave Friedman an injection of 10 micrograms of prostaglandin E-1. Dick dope. A drug so energizing that an impotent man would instantly sprout a woody.

Not that Friedman needed such aid. He was an Esquire reporter researching a story on the burgeoning 1996 erection industry. "I had heard that drug companies had isolated substances that could give a man an erection on demand," Friedman explains in an e-mail. "To do a thorough research job, I had to try them myself."

Friedman took his eternal boner home. The damn thing wouldn't go down. Friedman stuck his hand in a bag of ice. No go. He lightly slapped his joystick. Still hard. He went to his TV and turned on the Home Shopping Channel and tried to bore himself limp. "Still hard as a rock," he remembers. It was then that Friedman had his eureka moment. His penis might as well have wiggled to get his attention and started speaking: "David, David, Dave! You are looking at the latest chapter in a really old story, maybe the greatest story never told: the story of man's relationship with his penis."

Friedman realized that, since Adam, a guy's most complex relationship was not with his parents or his lovers or his boss. It was with his prick. David M. Friedman knew he had to write a cultural history of the penis.

When Friedman's tool finally tuckered and fell, he went to work. His research took him to strange places, such as the Mutter Museum, a medical museum in Philadelphia. There, the curator, Gretchen Worden, showed Friedman her private collection of preserved animal phalli and other anatomical curiosities related to genitalia.

"Not for the fainthearted, trust me," he reports. "I remember seeing a monstrously large stallion penis, which Gretchen had a few horse laughs over. And I also have a recollection of seeing a human scrotum roughly the size of a bowling ball. Gretchen, who's an extremely intelligent and ebullient woman in her 40s (I'm guessing), revels in this kind of stuff, yet never loses sight of the fact that hers is an authentic medical museum -- and not a freak show."

Friedman also studied books like "Pederasty and Pedagogy in Archaic Greece" and "The Latin Sexual Vocabulary." The latter title analyzed the more than 100 Latin slang terms for the pecker. Friedman quips: "Obviously the author, Professor J.N. Adams, had a lot of time on his hands."

At one point, Friedman watched a sonogram of his own hard-on. He also met a few times with Andrea Dworkin -- a woman convinced of the phallus's evil pathology -- at a Brooklyn Starbucks at 7 p.m., "Only an hour or so after she woke up," Friedman says. "She's a total night owl -- sleeps during the day, works at night." Then he adds, "All I can say is that she's a surprisingly gentle person, and definitely not the shrill, man-hating shrew that her enemies portray her to be."

Friedman worked this way for three years. The fruit of his labor, "A Mind of Its Own," has just been published by the Free Press. The book is a serious examination of the history of that anatomical object that has been named, variously, Mr. Happy, Mr. Johnson and the simple epitaph Jones. It is a serious book. A sly book. A wry book. It's a book that examines every aspect of the penis except why on earth anyone would ever want to put one in their mouth.

This is just the beginning of the unsexy history. The penis itself will be ripped, hacked and sliced away from its owners during war, religious tribunals and Ku Klux Klan get-togethers. As for that opposite sexual organ, the vagina -- it's just "a hole to stick [a penis] in whether the person with the hole wants to be stuck or not" (or so quoteth night owl Andrea Dworkin).

"I'm more interested how the penis as an 'idea' shaped Western culture for better and worse," Friedman explains. "Unfortunately, history shows us that (white) Western man's ambivalent relationship with his penis  especially after the organ was demonized by the early Roman church  created several classes of victims.

"Women suffered because they 'enticed' the beast within men -- the lusty penis -- to emerge from its slumber (or, even worse, forced men to confront their sexual inadequacies). Jews suffered because they altered their penises via circumcision, and were thought to be simultaneously 'feminized' and pathologically lustful, especially when it came to seducing Christian virgins. And black men suffered for their allegedly superior endowment, which, two centuries ago, convinced virtually every theologian and anthropologist then alive that blacks were not fully human."

Probably the most controversial part of "A Mind of Its Own" documents the myth or pathological truth of how well hung African-Americans are. The book takes different stands, including the politically correct all dicks are created equal. Privately, however, Friedman says, "Urologists tell me off the record that their clinical experience suggests that black penises are generally larger. I'm told that, back in the 1980s, when the United Nations became interested in giving condoms away to help prevent the spread of HIV/AIDS that they had condoms manufactured in three sizes: black (biggest), white (medium), Asian (smallest)."

Friedman is then reminded of the old Richard Pryor story about two old black men urinating into a river from a bridge above. "Wow, that water's cold," says the first one. "Yeah, and deep, too," says his friend.

Friedman considers this obsession with trophy size a male preoccupation. "The evidence I've looked at -- and I've looked at a lot -- shows that the people who've done most of the obsessing about how big a penis is, and I believe still are, are men." Then he adds, "This isn't to suggest that there aren't women out there who prefer a larger-than-average penis. Some, I'm told, meet prospective dates by subscribing to 'Hung Jury,' a newsletter featuring men with penises that measure at least eight inches in length -- about two and a half inches longer than the typical penis."

As long as we're on this subject, does a monstrous trouser snake give a better orgasm to its owner than the smaller skin flue? "Sensitivity in the penis, and everywhere else in the human body, is typically measured by density of nerves in a given area," Friedman answers.

"A large penis is not necessarily more sensitive than a small penis, nor does it have a larger orgasm." Friedman then clarifies what's really important. "Generally speaking, a penis functions better -- for the man as well as the woman -- if it is thicker than usual, rather than longer than usual. A penis that is really, really long -- like that on Long Dong Silver, for example -- often has difficulty becoming completely hard because it's harder for the blood inside to get completely trapped inside the penis. (It's a simple matter of hydroengineering.) A urologist I know who saw a porn film starring Long Dong Silver swears the poor guy was never fully erect, and that he spent much of the film swinging his penis around as if it were a piece of rope."

As a penile concern, the practice of circumcision is as controversial as dick size. According to Friedman the only compelling reason to be circumcised is tradition. "There's certainly no convincing medical reason for the practice," Friedman says. "Parents want their sons to 'look like' their fathers." Then he adds, "One of the prime reasons why 'hygienic' (nonreligious) circumcision became routine in U.S. hospitals a century ago is that it was thought to reduce the likelihood of masturbation later. This was total bunk, of course, but neonatal circumcision is still the norm in the U.S., though the number of noncircumcised males is growing."

Perhaps the ultimate violence associated with the object alternately called a prog, spear and ramrod is rape. Friedman thoroughly examines the penis's inherent desire to intrude where it is not welcome. But no definitive conclusion is reached. "Anyone who thinks rape is related to testosterone levels in men is completely and demonstrably wrong," he says in an e-mail.

"One of the weakest arguments made by feminism in the 1970s was the attempt to link male-on-female rape to testosterone and/or pornography. That linkage just does not exist, at least not in a provable, scientific sense." His book finally concludes: "What we can say ... without any fear of contradiction, is that testosterone creates the organ that many men refer to as their manhood, the same organ many feminists liken to a battering ram."

Despite Friedman's focus on the penis's tendency toward violence, the thing that surprises him the most is that, after millions of years of hard-ons, scientists only just figured out in the early '80s what makes the beanstalk grow. He describes how Giles Brindley, an English physiologist, gave new meaning to the term "scientific presentation" at the 1983 meeting of the American Urological Association.

"Brindley [was] experimenting with drugs that could give a man an erection on demand. Rumors of his research got him invited to the AUA convention in Las Vegas, where one American challenged him to support his controversial data 'beyond charts, tables and graphs.' Brindley decided to do just that. Just before he took the podium, he went to a nearby men's room and injected himself with his experimental medication. Then, after presenting his data, Brindley stepped in front of the podium, unzipped his fly and presented himself. There it was, for all to see, the, uh, 'evidence.' Never before had so many penis doctors seen another man's erect penis. And in this comical moment, modern medicine, male sexuality and man's relationship with his penis, were changed forever."

Friedman finishes the tale, and one understands why his friends have nicknamed him the "Dick Guy" or just "Dick" or finally, "Nixon." "I can't tell you how many times I'd be at a party," Friedman says. "When someone I knew would drag over someone I didn't, then point to me and say, 'Hey, this is the penis guy!' Trust me, it's a helluva conversation starter. Of course I had to explain that the book wasn't about my penis." Then he adds, "That book, after all, would be too heavy to hold."