Ready for her close-up

A doctor, educator, human rights activist and mother, Habiba Sarabi longs for a chance to work -- legally -- back home in Afghanistan. 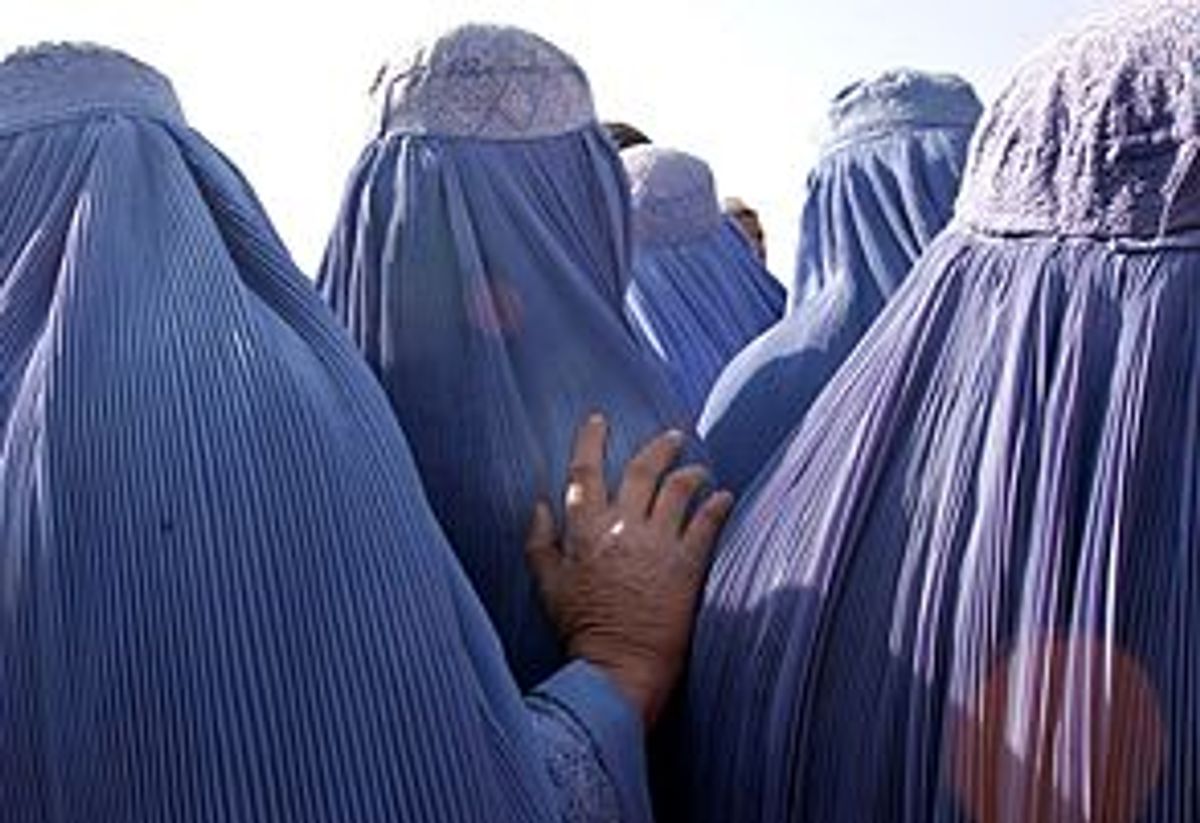 Habiba Sarabi has a cold. She sits wearily on a leather couch in the lobby of the Crowne Plaza hotel here, coughing and clearing her throat every few minutes. Just a week ago, she was illegally crossing the mountains of Afghanistan on foot. After a quick stop in Pakistan, she arrived in this posh hotel, a participant of the first Afghan Women's Summit, worlds away from her daily life.

Sarabi had been returning from Kabul when she traversed the mountains. She had traveled home to check up on the literacy programs that she oversees there. Her husband had wanted her to ride a donkey during their trek through the mountains, she says, but she initially refused as a point of pride, wanting to show solidarity with her Afghan sisters. "I told him, 'I am an Afghan woman; I have to walk because of all the other women who have climbed through these mountains,'" she explains, proudly. It was a cold and difficult journey, and her cough is a legacy of the trip.

The journey between Kabul and Peshawar has defined Sarabi's life for almost five years now. A hematologist, pharmarcist and professor, she fled Kabul in 1996 with her three children, reluctantly leaving her husband behind. Since then, the couple has regularly traveled between the two countries to maintain some semblance of family life. Also, as one of the women behind HAWCA -- Humanitarian Assistance for the Women and Children of Afghanistan -- Sarabi's job is to slip across the borders to coordinate more than 80 literacy courses taking place all across Afghanistan.

Sarabi describes herself as an "educated and intellectual woman," and she definitely looks the part: Bespectacled, in a conservative suit with her graying hair pulled back from her face, she looks as if she just stepped out of a classroom. She is soft-spoken, articulate and convincing; her intelligence is matched only by the ferocity of her commitment and affection for the people of Afghanistan.

Certainly, she has lived a more priviledged life than many of her Afghan compatriates. Born in 1956 in the liberal and modern city of Mazar-e-Sharif, Sarabi spent her youth traveling around Afghanistan with her father, an agricultural systems expert. She went to high school and university in Kabul, where she studied medicine. After graduation, she was awarded a fellowship with the World Health Organization, and traveled to India to study hematology.

Until the Taliban marched into Kabul in September 1996, Sarabi and her husband -- also a doctor -- lived a comfortable urban life. During the Northern Alliance occupation of Kabul, life had become increasingly troubled and dangerous -- she and her friends were occasionally threatened because they wore "smart and elegant" clothing -- but Sarabi was still able to practice at a local hospital and teach at the Intermediate Medical Institute. Her children were on their way to a good education. But when the Taliban marched in, that all came to an end -- her daughter, then 12, was immediatelly forbidden to go to school. Within two months, Sarabi was packing her bags for Pakistan.

"It was very tough for me to see my children without education; that's why I came to Peshawar," she explains. Her husband remained behind in Kabul to keep an eye on the family's house and belongings. He took care of his aging father there while Sarabi organized her children's education in Pakistan. It was a difficult arrangement, she says, but typical for many refugees. "It's very hard for me and my children. But a lot of Afghans live like that, in the same situation," she says. "I would go to Kabul for my job, and sometimes my husband would come to Peshawar to visit me and my children."

Sarabi had enrolled the children in the best local school she could afford and secured a job as the health manager of the Afghan Institute of Learning, an NGO with a presence in the numerous refugee camps in Peshawar. She ran women's rights workshops in the camps, reaching out to impoverished women raised in a culture in which they had no value.

"You can divide the Afghan women into two categories: the educated woman who lives in the urban areas, and gives herself the right to express herself; and rural women," she explains. "The majority of Afghan women are rural. Women in rural areas are not considered even capable of opinion: Not only is she deprived of the basic right of expressing her feelings, but she can't marry the person she wants, and is forced to marry at an early age.

"Basically," concludes Sarabi, "they are being treated like animals; they are referred to in a derogatory way as if they have no rights."

Early last year, she took a job with the fledgling organization HAWCA, a rapidly growing activist group that provides education, health and work to women refugees and their children. When Sarabi talks about her work, her face lights up, and she grabs my hand and grips it tightly. "I have contacts with the coolest people in the camps; I love my work," she gushes, in enthusiastic if erratic English. Working with HAWCA, she now oversees underground literacy programs in Afghanistan, and runs two schools for refugee children in Pakistan.

"One school, which I love very much, is for carpet-weaving children of the Hazarat ethnic group," she says, explaining that she, too, is of Hazarat descent. "They are working from early in the morning, from 5 a.m. to 9 at night, so we had to create a special school, without the normal curriculum: This school just goes on for two and a half hours, because otherwise they are working to get money for their families. When I saw that the little children could now read and write, I became very happy; they are also happy, and they embrace me a lot."

Sarabi is equally effusive about her own children. She has two sons, ages 14 and 8, and a daughter, age 17, who is about to enter college. "My daughter speaks English very well. I'm very proud of her; she's a very intelligent girl. She is hard working and knows it's not easy to get an education in this situation. Education in Peshawar is very hard: It takes too much money." And money is especially tight these days, she says: Her husband recently lost his job at a medical institute, and has had to resort to running a small shop in Kabul in order to support the family.

Although her husband fled Kabul for Peshawar when the bombing began, he and Sarabi returned there two weeks ago to see the changes that had taken place since the Taliban left the city. Sarabi also wanted to check up on the 20 literacy courses that she coordinates in the city: She was crushed to find that 10 of the classes had disbanded, since the teachers had fled the city.

Although the Taliban were no longer omnipresent on the streets, Sarabi observed that little had changed in Afghanistan's capital: Women were still wearing burqa, in fear of being attacked by soldiers; and her driver had recently been beaten by a Northern Alliance soldier simply because he was Pashtun. She sighs: "Instead of Taliban, it was just other armed people walking around the city."

During her trip to Kabul, Sarabi also visited her former workplace at the medical institute, only to find it a ghost town. "Every door was locked; the department of pharmacy, the department of hematology," she says. "I went to an administrator and asked him if any female teachers had come back. He told me, just two of them, and requested that I put my name on the register and start my work. But at the moment I don't want to work there; putting my name on anything is dangerous."

Sarabi's hope is that she can return to Afghanistan and help rebuild the infrastucture of a ruined health system. At the summit here, she has helped put together a list of medical priorities to submit to the new government. But because she doesn't trust the new government yet, Sarabi plans to remain in Peshawar, working with HAWCA, until there is some semblance of stability in Afghanistan.

As a woman of relative privilege and experience, Sarabi is in somewhat familiar territory in Brussels. She has been here before and has traveled through much of the rest of Europe, meeting with politicians and activists who have helped support HAWCA. But this trip is the first time that the world has really paid attention to Afghanistan's problems, she says.

"Before Sept. 11 nobody paid attention to the Afghan women. They just knew that Afghanistan meant 'women and the burqa,'" says Sarabi. "Now everybody knows that something wrong is going on, but the only problem here is not the burqa. I think the U.N. and the superpower countries are always thinking about themselves, not the poorest and miserable countries."

Besides rebuilding the basic health and education infrastructures in Afghanistan, Sarabi plans to continue fighting for women's rights, the focus of her teaching in the refugee camps for the last six years. She is happy that three women were named as ministers in the new Afghan government, but worries that there are many other women who are being overlooked. If nothing else, says Sarabi, the Brussels summit revealed that there a lot of Afghan women capable of taking on leading roles in the country's new government.

"I know a lot of women who are capable of doing a lot of things, especially those I've met in exile," she says, emphatically. "Three women are not enough to carry the task on.

Tomorrow: An aristocrat in exile scrambles to save Afghan art