Why college radio fears the DMCA

If the Digital Millennium Copyright Act is fully enforced, stations will be unable to afford to webcast their tunes. 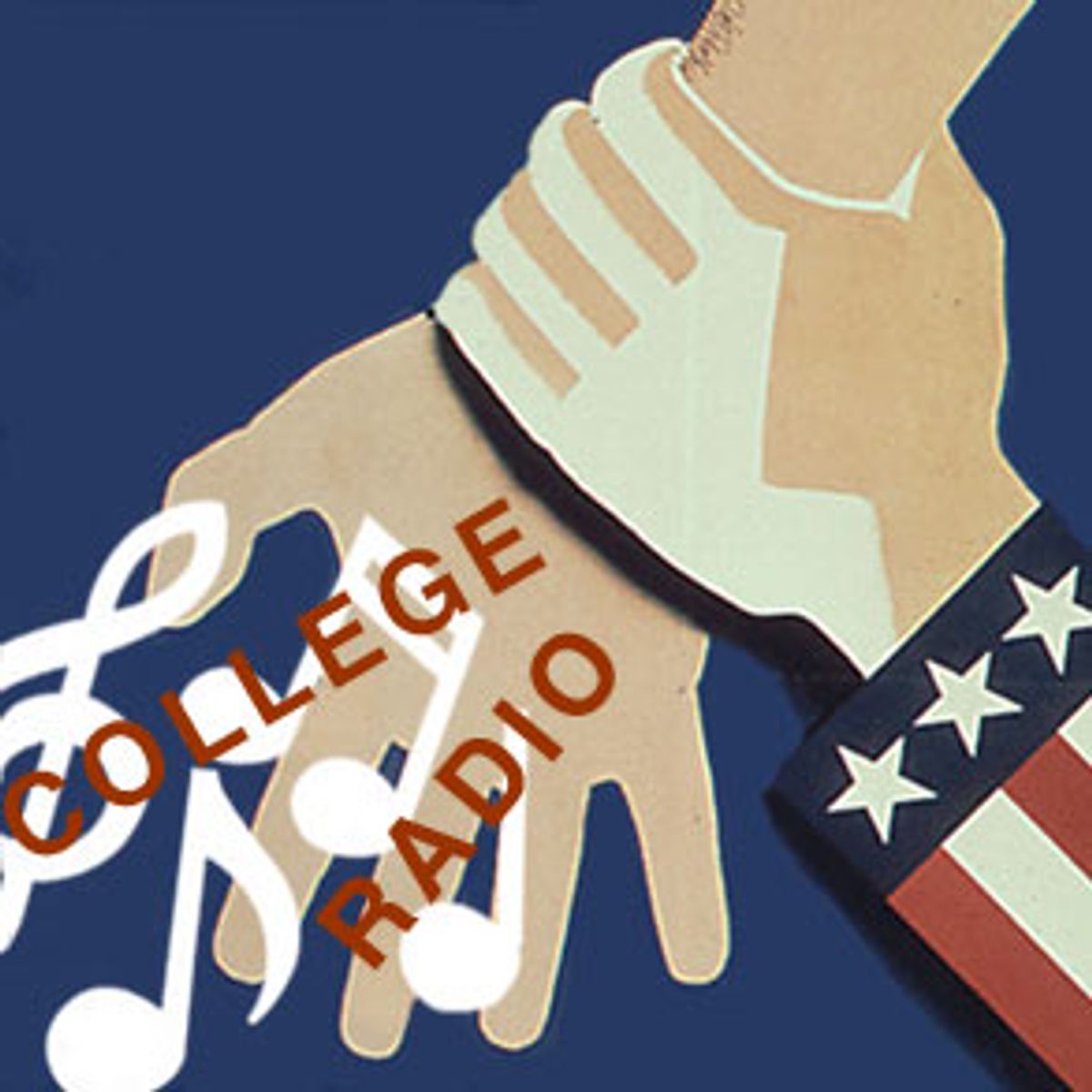 In the heady days of the late 1990s, Internet radio broadcasts were a poster child for the free flow of information over the Web. But if a 1998 federal law is fully enforced, webcasting could be just a fond memory for college radio.

Under the terms of the 1998 Digital Millennium Copyright Act (DMCA), radio stations around the country are supposed to pay thousands of dollars in annual fees to broadcast streaming audio over the Web. Managers of college and community stations say while their commercial counterparts may be able to pay the fees, their stations don't have the cash and will shut down their webcasts.

The 1998 law came up on Capitol Hill Thursday, as members of the House Subcommittee on Courts, the Internet and Intellectual Property held an oversight hearing on how temporary copies stored on computers should be counted when calculating copyright fees.

The hearing, said congressional staffers, was an early skirmish in a battle to defang the DMCA and transfer power from record companies back to broadcasters.

Webcasting was once touted as an example of the Internet's leveling power -- it allows small local stations to reach Internet users all over the world. And college stations, which run tight budgets and eclectic playlists, fit the webcast bill perfectly. But record companies don't like webcasting, with its potential for copying and distributing unlimited digital copies of songs.

Under long-standing U.S. copyright law, broadcasters pay a coalition of songwriters' groups to air music over the Internet and the airwaves. But until the DMCA, performers and record companies did not have the rights to royalties when stations played their music. As part of the 1998 law, Congress allowed performers and record companies to start collecting fees on songs sent over the web, said Joel Willer, a mass communications professor at the University of Louisiana at Monroe. There are still no performer fees for regular airwave broadcasts.

But until now, the law has yet to be fully enforced. If it is, college radio on the Web will be in trouble.

According to Bob Kohn, founder of eMusic.com, and author of a book on music licensing, classic Beltway dealmaking partially explains why radio stations are being asked to pay performers for webcasts,

As the 1998 Digital Millennium Copyright Act came together, says Kohn, the Recording Industry Association of America (RIAA) and the Digital Music Association, or DiMA, struck a deal: The DiMA, made up of webcasting heavies such as MTV, wanted to shut small webcasters out of the market. The RIAA wanted money for its artists and record companies.

The RIAA got their fees -- and the fees effectively strangled the interest in small-time webcasting, says Kohn. The fees may end up doing the same for college webcasting.

Both the RIAA and the DiMA strongly disagreed with Kohn's characterizations.

"That's just pathetic," says Jonathan Potter, head of the DiMA. "The MTVs and AOLs of the world have spent millions to argue for lower rates for everybody." Agreeing to webcast fees was painful, and was only done because members of the DiMA, faced with huge lawsuits over copyright infringement, had their back to the wall, says Potter.

Will Robedee, general manager of KTRU at Rice University in Houston, is trying to pull together a coalition of college radio stations to change the DMCA. Some fees are acceptable, but college stations shouldn't have to pay anywhere near what the big commercial stations pay, says Robedee. The law makes some provision for special treatment of nonprofit stations, but Robedee wants guarantees of substantially lower fees

The law also includes requirements that stations report every song played -- requirements, says Robedee, that would be impossible for low-budget, nonautomated stations to meet.

"There is a public interest in having these stations webcasting," Robedee said, citing exposure given to unknown bands, and the eclectic playlists that characterize college radio.

Still, performers deserve payment for their songs, says Jano Cabrera, spokesman for the RIAA. "We think that the law makes sense because artists and record companies who invest time, energy and resources should be compensated."

The fees, if implemented, would mean the end of webcasting at KALX, the University of California at Berkeley's radio station, says KALX general manager Sandra Wasson.

KALX pays a total of $623 per year to songwriters (as opposed to performers) to play music over the Web. The fee is low, Wasson said, because KALX doesn't run advertisements. If the recording industry's fee proposal goes through, KALX would have to dish out $10,000 to $20,000 a year in webcasting fees, Wasson said. And the fees would be retroactive to 1998.

"On our small budget, there's just no way we can afford those amounts," says Wasson, who also notes that KALX's $200,000 yearly budget is huge compared to most college stations.

The recording industry and broadcasters are battling in front of a federal arbitration panel over just how high those fees should be. The RIAA, representing performers, is asking for 0.4 cents per listener per song. Broadcasters want fees many times lower. Record companies and performers will split the fees equally, Cabrera said.

Robedee, at Rice, hopes a new bill intended to gut the Millennium Copyright Act will include protections for college stations.

The Music On-Line Competition Act is designed to break the hammerlock the recording industry has over music distribution, says Rep. Chris Cannon, R-Utah. Cannon co-authored the bill along with Rep. Rick Boucher, D-Va.

Cannon hails from a conservative district in eastern Utah. But he called music-swapping service Napster "one of the coolest inventions of modern times."

The Boucher-Cannon bill streamlines the licensing and fee payment process for webcasting, but as of yet, it doesn't lower the amount college stations will pay.

Cannon, however, says he is willing to sit with college and nonprofit stations and hear what they have to say.

Cabrera, at the RIAA, called Boucher-Cannon a "solution in search of a problem," saying it introduces too much government regulation.

But according to one Cannon aide, copyright holders have listeners and broadcasters over a barrel.

"The pendulum has swung a little too far for the copyright holders," the aide said. "As a result, college radio stations are going to get hit with $20,000 bills."

"It boils down," the aide said, "to, Do you want choice in your music?"

Mark Shahinian is a freelance writer based in the San Francisco Bay Area.