Crappy shows, you face "The Tick"! 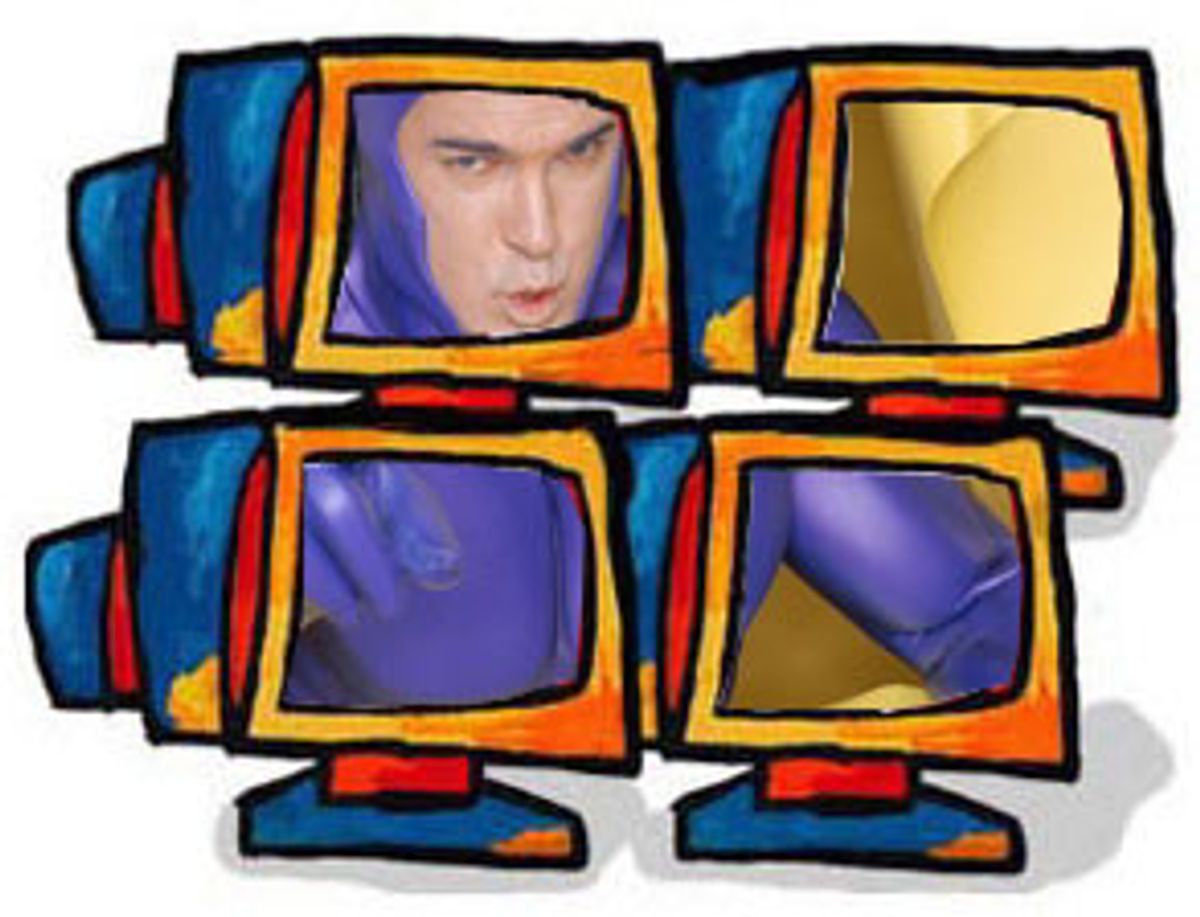 Toward the end of the pilot episode of "The Tick," Fox's new comedy about the daily life of a superhero in a city glutted with superheroes, the title character pops a fortune cookie into his mouth without breaking it open first. Pulling the tiny strip of paper from his choppers, he cries out:

"A secret message from my teeth!"

Like everything he says, it's irrepressibly gleeful, totally sincere and completely bonkers. Then, he reads: "The road to hell is paved with good intentions."

He wouldn't, because "The Tick" is a smart show about a dumb superhero in a bulging blue latex suit who has come to the city to "spread [his] buttery justice over [her] every nook and cranny." The Tick is played with deadpan aplomb by Patrick Warburton, best known as Elaine's boyfriend Puddy on "Seinfeld." If anything distracts the Tick from his passion for crime-fighting (aside from stepping in gum), it's the equally important task of bolstering the self-esteem of his insecure neophyte sidekick Arthur (David Burke) with rousing pep talks and expressions of heartfelt approval. As knuckleheaded as he is big-hearted and as single-minded as he is naive, the Tick is hands-down the nicest superhero ever created. Who else but a big, dumb lug would be so obsessed with "fighting for the common good" without getting paid? Or rather, who else but a big, dumb lug would have been this obsessed with it in a pre-war-on-terror world?

"The Tick" has been around for a while now, though it's still unclear how much longer it will last. The show on Fox (based on a Fox Saturday morning cartoon of the same name that was later replayed on Comedy Central), which was originally based on a cult comic by Ben Edlund, has not yet been picked up for a full season run despite being one of the highest-rated comedies among young viewers in the recent November sweeps. Let's hope Fox makes the commitment, because no matter how long ago it was created, "The Tick" has finally arrived right on time.

A superhero tailor-made for the new butt-kicking earnestness, the Tick doesn't understand sarcasm, irony or frisky double-entendres. In fact, he doesn't even understand criticism. (When Arthur accuses him and some of his other superhero friends of being "just a bunch of self-centered, egotistical, sexually frustrated kindergartners. No offense intended," the Tick replies placidly, "None comprehended.") For the Tick, the world is painted in black and white -- or, on occasion, black and blue. As he says, "Someone's got to stand the heat and stay in the kitchen. Someone's got to don the oven mitts of all that's right and strangle the red-hot throat of all that's wrong." It doesn't bother him that this town is crawling with those somebodies, and that some of them hire publicists to get their pictures in the paper. He's not in it for the glory. When a colleague asks him what planet he's living on, he replies cheerfully, "Planet Me!"

Edlund and executive producer Barry Sonnenfeld ("Men in Black") reportedly pitched "The Tick" to networks as "Batman" meets "Seinfeld." As Edlund told the Boston Globe, "Fighting villainy isn't what happens in real adult life. What happens is you sit around." The famous "nothing happens" premise is evident here, too. There is plenty of sitting around at the Lonely Panda, the Chinese bar and restaurant where "The Tick's" protagonists get together with their best superfriends Captain Liberty (Liz Vassey) and Batmanuel (Nestor Carbonell) to swap stories and get on each other's nerves. Liberty and Batmanuel have the kind of relationship in which they can only keep their hands off of each other long enough to spit out a fresh verbal affront: "Right-wing ice princess!" "Greasy twerp!"

The big difference between the two shows, aside from the costumes and the superpowers, is that "The Tick's" hero really, really cares -- about everything, all the time. A few minutes after the fortune cookie incident, the foursome learns that the city is under attack from a bovine beast called Apocalypse Cow. Never mind that he has just finished thrashing some evildoers who tried to destroy the postmaster general with a Soviet robot from 1979 ("Don't do drugs!" the Tick reminds them as he hurls them across an alley), the Tick is not one to pass up a "slice of righteous combat pie" when it's served up. He and the workaholic Captain Liberty rush out to fight the Cow, but Arthur hesitates when he sees Batmanuel shows no signs of going anywhere. "Apocalypse Cow is 50 feet tall and shoots fire from her teats," Batmanuel informs the nervous Arthur before taking a cellphone call from a friend with good-looking relatives. "Diego," he smiles, as the city explodes just outside the window, "how's your sister?"

But why else choose the life of a superhero if you aren't in it for the common good? As with all higher callings, it's easy to confuse it with baser ones. Batmanuel is in it for the sex and the glamour; Captain Liberty is in it for the sex and the power. Arthur is in it for the same reasons people quit law school to write screenplays. As he tells his boss at the accounting firm where he worked before ditching it all, "Mr. Fishladder, I have been living a lie. I am more than just a mild-mannered accountant. I can't hide from it any longer. I'm going to become a superhero! You know, part-time at first." A few hours later, he's at the Lonely Panda drinking to "the hero's life! Our destiny!" A few minutes after that, he's throwing up in an alley. The Tick narrates his own story to himself as he hops across rooftops, demolishing cornices. "He stands in silence, stoic, godlike, the mysterious blue avenger who has become legend to the simple folk of this bus station. But glory will not distract him from his vigil." He can't even remember who he was before he was the Tick, if he was anybody.

While perhaps not exactly on the road to hell, the foursome isn't strolling down the primrose path, either. They face the same frustrations as the average 30-ish urban dweller: meager cash flow, waning social lives, red tape and unreliable dry cleaners, not to mention the irksome presence of other, more successful superheroes. Arthur, who wears a moth costume that makes him look like a parachuting bunny, has only recently made the midcareer switch from mild-mannered accountant to superhuman crime stopper. He is brutally hard on himself, convinced that he doesn't have what it takes to make it in the hero trade. Captain Liberty, who works for the CIA and is arguably the most successful of the four, agonizes over being single. In one episode, she tries to buy a dog. When she shows a complete lack of nurturing instincts, the salesperson refuses to sell it to her. "What you need is a singles chat room, ma'am. Not some living creature."

Batmanuel, a slick, Latin superlover who, despite his talk of saving busloads of supermodels "in more ways than one," spends Friday nights with his TV. When Captain Liberty asks him if she and he are lonely, he says, "We're too attractive to be lonely."

"But we are alone," she insists.

"Not alone," he says, "Lone. Alone is an unfortunate predicament, lone is an aesthetic choice."

In another episode, the superheroes' superhero, an elder statesman type known as the Immortal, comes to town for a book signing. Captain Liberty is assigned to escort him, which makes Batmanuel wildly jealous. On their way from the airport, the Immortal hits on Liberty by telling her he's putting together an international league of superheroes that she'd be perfect for. Then he puts a hand on her knee. (She does sleep with him, and he dies.)

Though the Tick's disappointments are more in line with those of a preschooler (the Tick is shocked to discover that everybody -- even horses and potatoes -- dies, not just dead people), he is not totally immune to the life's vicissitudes, although being stupid always helps.

Arthur perseveres despite others' lack of faith in him. On his first day on the job, the seen-it-all-before bartender at the Lonely Panda turns to the broken-down superhero at the bar and says, "I think he's going to fall down a lot and die." Arthur does fall down a lot, but the Tick is always there to make him feel better about it: "No, chum, you were great! You picked the softest spot on the roof!"

If being a superhero is just another dream that eventually turns into just another job (and one that requires a license), then "The Tick" is also a show about aspiring, and about what happens when you make your dreams come true: not a whole lot. Common good, higher calling or no, our jobs eventually define us, sometimes to the exclusion of everything else. Whether this is good or bad depends on what is being excluded.

Captain Liberty ditches the uniform for a while in order to date a civilian who doesn't know she is a superhero. When a mugger attacks them after a date, the truth comes out. ("Sorry!" she says to her horrified date after kicking the gun out of the attacker's hand.) In the same episode, a crazy woman who claims to be his wife whisks the Tick away from the crime-fighting life and brings him home to toss the salad. Feeling betrayed and abandoned, Arthur chucks the moth suit and tries halfheartedly to get his old day job back. ("Balancing the books is the only battle I want to win," he says unconvincingly.) Within 24 hours, they are all back on the job, whatever it is, because they can't help it. This is their life.

"Arthur," the Tick says on the way home from the supermarket one night, "that checkout lady was giving me the hairy eyeball."

"I'm telling you she's up to something."

Even if they can barely afford to be righteous, they do it anyway. No matter how stiff the competition, how tedious the grind and how measly the recognition, they know they're lucky. Not everyone has the luxury of following their dreams.