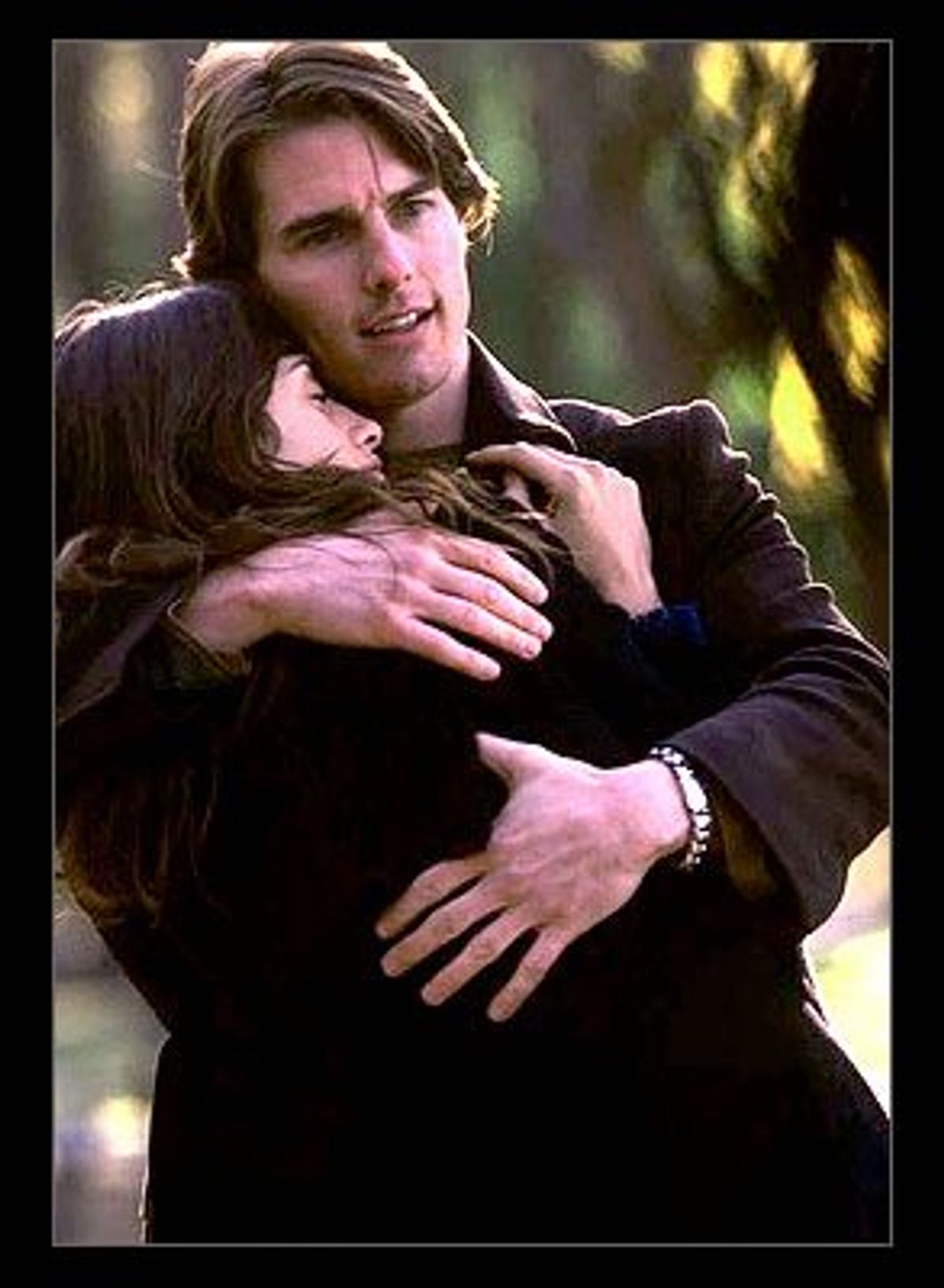 There are so many travesties in "Vanilla Sky" that it's almost impossible to list them in the order of their infamy. There's the shot in which Tom Cruise and Penelope Cruz, two slick Beautiful People who, with their resources pooled, scrounge up enough depth to fill a shot glass halfway, reprise the cover of "The Freewheelin' Bob Dylan." Then a scene in which a bloodless 3-D specter of John Coltrane, brought to life by the miracle of holography, entertains a group of chattering, blasi partygoers who ignore him as if he's the hired help or, worse, amuse themselves by passing their hands through him. Or, inexplicably, the fact that Tom Cruise's character has little interest in his lively, if crazy, sometime gal pal Cameron Diaz, and instead gravitates toward pinheaded munchkin Penelope Cruz, with her rubberized lips and "Don't hate me because I'm beautiful" hair. She thinks she's Sophia Loren's Mini-Me.

Who would have thought that Cameron Crowe had a movie as bad as "Vanilla Sky" in him? It's a punishing picture, a betrayal of everything that Crowe has proved he knows how to do right. His two most perfect movies, "Say Anything ... " and "Almost Famous" -- the first released in 1989 and the second just last year -- already have the vivid resonance of favorite pop albums, replete with snaps and crackles that many of us have come to know by heart. Even in "Jerry Maguire," Crowe's biggest hit and his most obvious mainstream vehicle, he understands the way pop vernacular links us to something universal and tender. Of all directors working today, Crowe is most finely attuned to the galloping heartbeat of pop culture; he's alert to its loudest, most vital thumps, but he's more interested in listening around them, to pick up the quieter hiccups and murmurs and thrumming that, in the end, mean everything.

If "Vanilla Sky" were completely tone-deaf, we could just check it off as an anomaly and move on. But the disheartening truth is that we can see Crowe taking all the right steps, the most Crowe-like steps, as he mounts a spectacle that overshoots boldness and ambition and idiosyncrasy and heads right for arrogance and pretension -- and those last two are traits I never would have thought we'd have to ascribe to Crowe. In "Vanilla Sky" -- a remake of Alejandro Amenabar's "Abre los ojos" ("Open Your Eyes"), which also featured Cruz -- Tom Cruise is a young publishing hotshot who, like a bumblebee in Helmut Lang, flits from flower to flower, never landing long enough to fall in love.

Cameron Diaz is the friend with whom he often casually shares a bed; she acts as if she can handle the nebulous terms of their relationship, but it quickly becomes clear that her sunny heart harbors an obsession blacker than Cruise's clothes. Her unhinged adoration causes an accident in which Cruise is horribly disfigured -- but not before he falls madly for the woman his best buddy (Jason Lee, a sharp, appealing actor who, this time around, is all dressed down with no place to go) has a crush on. The dancer-artist prancer-vixen is played with unnervingly perky self-assurance by the dreaded Cruz. As if that weren't enough punishment, Cruise also manages to land himself in prison. There he broods mightily, a tragic figure behind a latex Phantom of the Opera mask, resisting the efforts of his daddy-shrink (Kurt Russell, delivering an even-toned performance in a thankless role) to help him.

Although it sounds as if I've given the whole thing away, that's not even one-tenth of this aggressively plotted puzzle picture, which clutches many allegedly deep themes to its heaving bosom without uncovering even an onionskin layer of insight into any of them. Dreams, desires, fear of death, gravitation toward beauty for its own sake, the way we all yearn to be people we're not -- those are just a few of the tadpoles squirming around in Crowe's primordial po-mo murk.

There's something of a story to hang onto, but not nearly enough. The movie's "surprise" ending feels like a cheat. Crowe somehow manages to fool you into believing that it will all add up to more than it does. There are a few exceptional performances: Tilda Swinton appears as a quietly hilarious model of crisp efficiency. Noah Taylor (the actor who played the young David Helfgott in "Shine," giving a much fresher performance than Geoffrey Rush's overpraised and overcooked one) plays a devilishly mysterious corporate scientist.

But with the exception of Diaz, the lead actors don't seem to have any sense of what movie they're in and why they're there -- and neither do we. Cruz radiates a plug-and-go life force. Her character is the kind of woman some men fall for when their calcified notion of the ideal woman renders them incapable of reading the ingredients panel to find out what they're actually getting. Instead, they just stare dumbly at the box: She must be down-to-earth because, although dazzlingly beautiful, she wears a suede jacket with jeans. She must have wisdom, warmth and humor, because she's a dancer with fine bones and birdlike shoulder blades. She must be a ready-made soul mate because of her ability to challenge a guy with red-hot observations about his innermost self. Wrap it up: I'll take it!

Cruz, having perfected the art of hair tossing but not much else, wears thin by the end of her first 30 seconds on-screen. Incredibly, we're supposed to understand why Cruise's character prefers her to the spacily dazzling Diaz.

It says something that Diaz's certifiable and highly dangerous crackpot is the most likeable character in "Vanilla Sky." Cruise, an earnest and well-meaning actor who throws himself heartily into every role and occasionally comes up with something interesting (as he did playing the TV huckster in "Magnolia," for instance), works exceptionally hard here, grunting and straining for the camera. But we never know what to feel for him. He's surely not likeable. (Crowe would be the last person to expect us to like a guy who keeps one of Pete Townshend's busted guitars in a glass case as an emblem of his coolness.) But he doesn't have enough depth or vitality to inspire that tugging mixture of sympathy and repulsion that we often feel for a great character. Cruise is a pain in the ass before his accident and a thousand times worse afterward. Yet Crowe treats the character kindly, almost tenderly, and it's baffling given the way he's presented to us. One of Crowe's most appealing qualities as a filmmaker is how unabashedly he shows his love for his characters. This time around you simply wonder how he could be that much of a schmuck.

The bare bones of "Vanilla Sky" made it seem potentially promising; I had hoped that maybe Crowe was going to make a leap and strike a high note of operatic obsessiveness. But even though "Vanilla Sky" contains numerous love scenes, it's numbingly unerotic; it's barely even perfunctorily romantic.

The knotty truth that's hardest to reckon with is that Crowe's greatest gift flowers here with as much lushness as it has in every one of his previous movies -- and for the first time, it's completely ineffective. Almost without fail in his relatively short career, Crowe has always used music beautifully, not just in choosing the perfect song for a scene, but in blending the sound and the visuals together in a seamless and organic whole. Dylan's "Fourth Time Around" is the perfect backdrop to the vision of two troubled lovers lazily romancing each other in bed -- that Crowe should zero in on that choice feels right and fitting.

But when those lovers are Cruz and Cruise, two fancy stars whose combined hyperthyroidal presence nonetheless adds up to something pinched and puny, Dylan's voice sounds like a faraway radio signal that's been picked up by mistake. It hovers listlessly in the air, lingering above them tentatively instead of sinking into their skin. But then, they're too wrapped up in their respective skins to absorb it anyway. They reject Dylan's parched blessing; it never occurs to them that they don't deserve it to begin with.