Why must the modern cookbook be such a flavorless affair? 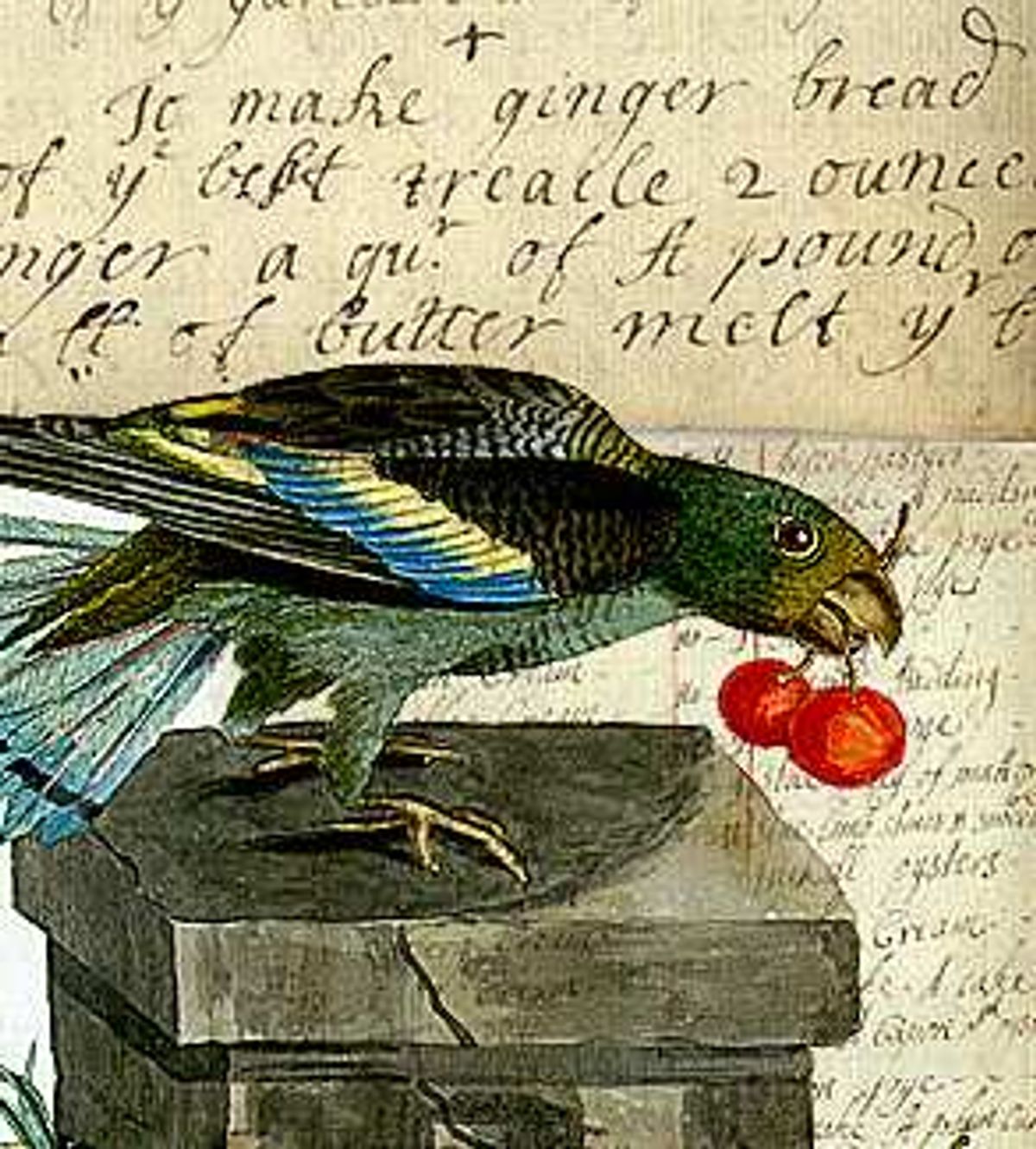 He ate and drank the precious words
His spirit grew robust.
--Emily Dickinson.

How often people boast, "Oh I read cookbooks like novels." It's a suspect claim; in fact, knowing what passes for reading these days one wonders if the trend isn't actually the other way around. But, when it comes to cookbooks, it's hard to be critical, because the poor modern recipe is about as original and engaging as the dishwasher manual, and every bit as literary.

Nevertheless, standard recipe format, which goes something like this, is for reasons far beyond me fiercely defended: First, the ingredients are listed in order with precise measurements in imperial, metric and cups. The method is then hacked into bite-size pieces and arranged in a reassuring cooking-by-numbers format. Nutritional breakdown of the end result generally follows, including a calorie count per serving for the dieters, and often at the very end is placed a thoughtful little star to indicate the name of the catalog from which the required specialty ingredients (unavailable in the average supermarket) might be obtained.

All of this presumably is for the cook's own good. "Safety in numbers" takes on a whole new meaning and the cook is protected from the faintest dependency on his feeble, out-of-shape instincts. Indeed, such a regression would be a virtual return to witchcraft and we couldn't have that! So, any recipe that strays in a corruptingly liberal direction is quickly scented out, hunted down and put to a silent death. When people talk about how to "execute" their recipes, I gather this is not what they mean, but it is unfortunately what they do. As a result, countless innocent dishes die tortured deaths on pages right under our noses every day.

The British cookery writer Elizabeth David, like a prophet, saw it coming, and in reviewing a cookbook by an American called Mrs. Brown, she tried to warn us. She praised the woman's recipes for being "easy on the eye and the mind" and "very far removed from those interminable recipes of American magazine cookery which call for one half-cup or one-quarter-teaspoon of everything but the washing up water." But no one listened and now we must live with the mournful consequences.

For example, one of my favorite recipes to read is Elizabeth David's own "Salad of Lettuce Hearts With Melted Butter":

Use only the tenderest of lettuce hearts for this exquisite salad; arrange them in a salad bowl, season them very lightly with salt and a scrape of sugar, and at the last moment pour over them warm melted butter into which you have pounded a very small piece of garlic and a squeeze of lemon juice.

In the hands of America's recipe executioners, I know full well what would become of it:

Method
1. To make the garlic butter: Peel the garlic clove and crush it in a mortar and pestle or with the side of a knife. Pour in the lemon juice and mix well, then add the butter, cut into pieces, and mash together until creamy. Transfer the mixture to a small saucepan and set over low heat to melt.
2. Meanwhile, wash the lettuce hearts. Dry them thoroughly in a salad spinner and arrange in a flat salad bowl. Sprinkle over the sugar and season with salt and pepper. Then, drizzle over the melted garlic butter and serve immediately as a first course.

In other words, right there and then, in black-and-white transcription, that once elegant recipe meets its tragic end.

All is not lost, however, if you know where to look. The house I lived in a couple of years ago, for instance, held an impressive collection of contemporary and antiquarian cookbooks. The oldest, bound in cracking leather, beautifully embossed, and illustrated with intricate ink drawings, were those I loved best, and indeed it was their poetic "receipts" that helped me to appreciate the concept of reading cookbooks as literature.

It started with my discovery of a book called "Delightes for Ladies" by Sir Hugh Platt, published in 1600. In it was a potentially useful recipe for "How to Gather and Clarify May Dew":

When there hath fallen no rain the night before, then with a clene & large sponge, the next morning you may gather the same from sweet hearbs, grasse or corne, straine your dewe, & expose it to the sunne in glasses covered with papers or parchment prickt full of holes, strain it often continuing it in the sun & in a hote place till the same grow white and cliere which will require the best part of the summer ...

Never had I seen a recipe so enchanting, so mystical, and when I found it I thought that perhaps there might be hope for the wretched recipe form after all. I began searching for others that would seduce me into the kitchen, whose language would make my mouth water and make me long to cook. I plucked from the shelves one forgotten cookbook after another, and as I opened them, out of the pages fluttered and soared the good spirits of what recipes should be:

Take three Quarts of Rasps, pulled when the sun is upon them ...

Put two ounces of brown or white sugar in an old tin cup over a brisk fire, stir this until it is quite dark and gives forth a burned smell ...

A Comfortable Syrup Against Melancholy ...

Out the words flew and around the room like songbirds freed from their cages.

What's surprising is that the recipes didn't at all lack guidance and detail, as so often is scornfully claimed by editors today. For example, the recipe "To Preserve Siberian Crabs," which I came across in "Recipes for, and Observations on, Cookery, Wine, Pickling, Preserving &c, &c, Collected From Experienced Persons," by Isabella Railton (Carlisle 1815), is beautifully precise:

...add a pound of loaf sugar crushed fine strew it amongst your crabs in a stone jar with a few spoon fulls of water at the bottom bake in a moderately hot oven and as they rise up press them gently down with a silver spoon.

Even more adept at tailoring complicated instructions is George Augustus Sala in his 1895 book aptly titled "The Thorough Good Cook: A Series of Chats on the Culinary Art and Nine Hundred Recipes." The volume is not, as one might expect, of overwhelming or intimidating size, because the man writes concisely. He tells how "To Spitchcock Eels," for instance, in just three tidy sentences. In another recipe, one for "Wild Boar's Head," he begins with actually cutting the head off the beast. Then he salts it for four days, steeps it, marinates it, stuffs it, sews it up, wraps it in cloth, walls it up with wood, boils it and puts it on the table all in one succinct and melodious paragraph, centered like a sonnet on the page.

It's not that Sala's omitting important steps either. As proof, he points out that "If you are out of wild boars, tame pig's-head will do quite as well." He also takes the time and space to caution that while wrapping the head in the tight cloth we must take care that we're "keeping the ears upright." In modern form, this recipe would take at least 10 pages to explain, and it would be sleep-inducingly unreadable I have no doubt. There again a sad loss: That perfectly valid recipe would sigh its last breath and be gone, rest assured, before morning.

It would join the countless others in American recipe boxes turned coffins: old recipes, rewritten in shackles, and new ones aborted in the minds of desperate, hungry writers who don't dare to risk putting them down in any original way. I fear this is how it will be, too, until we start believing that recipes have souls of their own, have characters and histories and might take on any number of interesting forms. The nourishment of a dish begins in its telling, and we will all be better fed when we learn to let recipes speak.

Hannah Wooley, I think, has a medicine that could possibly induce the trend. In her 1711 cookbook "The Compleat Gentlewoman," she gives "A Cure for the Bite of a Mad Dog," which testifies convincingly to the power of language and might therefore have a positive effect on open minds. She advises, "Write in a piece of paper these words, Rebus, Rubus, Epitepscum; give it to the Party or Beast bitten, to eat in Bread. This never fails."

Laura Calder is a freelance writer living in Paris. She is currently writing a book about French food.