What I learned about Christmas

Everybody hates it, and other lessons from "The Simpsons," "Ally McBeal," "Alias," "Raymond" and "Malcolm." 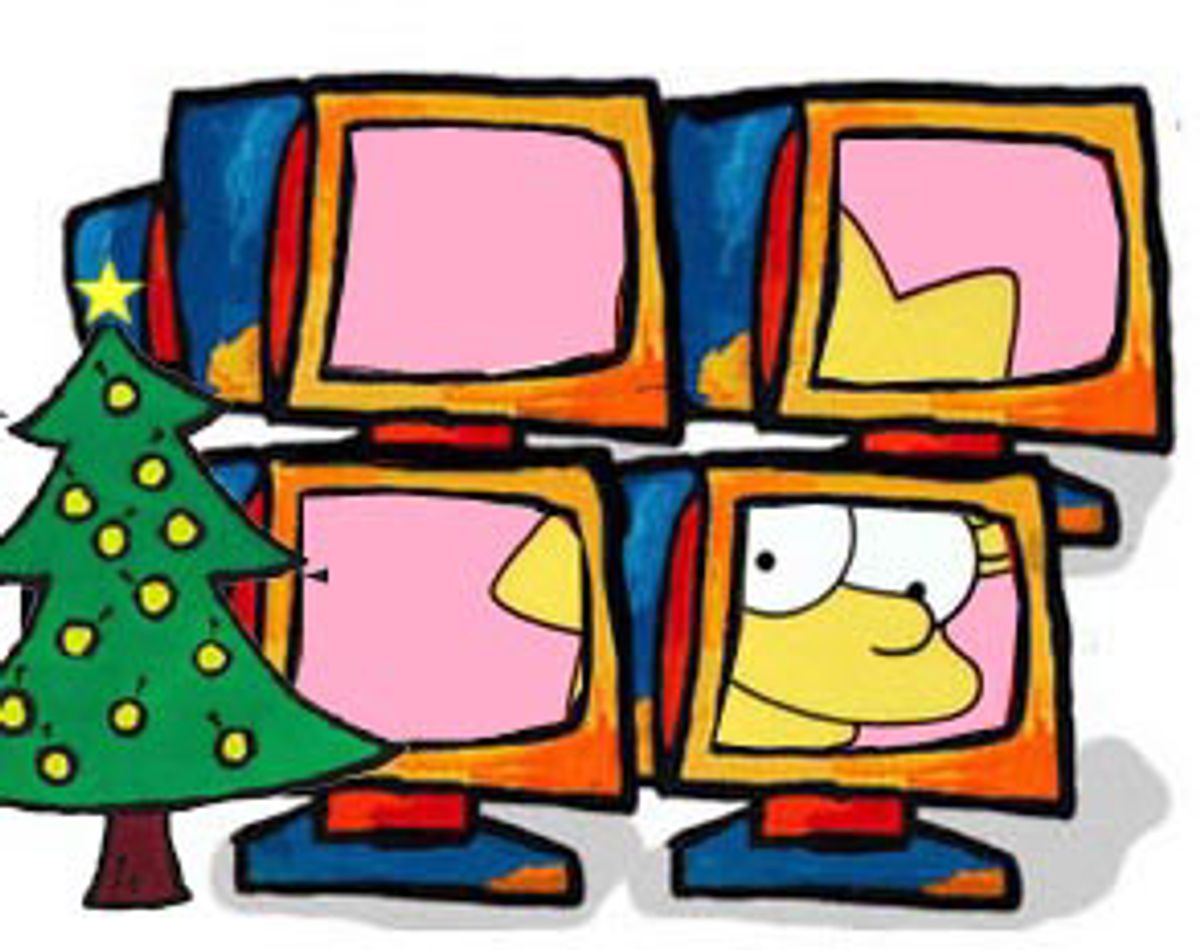 A grim pall has settled over the season courtesy of an elusive, bearded man from a barren, Godforsaken region where they've never even heard of Wal-Mart. Nobody has seen much of him lately, but he manages to invade our every waking hour -- all you have to do to be reminded of his oppressive presence is turn on the TV.

Britney Spears should have his publicist. He has the power to make millions anxious, unsettled and unaccountably depressed. And yet, for all anybody knows, he could be dead, lying at the bottom of an igloo, a jagged Coke bottle sticking out of one twinkling eye. Maybe this year they'll find him. Maybe, this time next year, the kids will be sending gift requests to the Seven-up dot, or the Jack-in-the-Box holiday balls, or Ronald McDonald can come out of retirement. Whatever happens, Santa Claus is one carbonated beverage spokes-critter whose time has come.

I'm not the only one who feels this way. One thing I learned by watching a string of very special holiday episodes this week is that nobody likes Christmas anymore, not even sitcom writers. This year's very special message: Christmas is hell in a stupid sweater. (On the upside, Christmas also provides opportunities for jokes like, "If I had mistlefoot it would be up your ass right now," thereby cutting down on grueling sitcom writing hours.)

But if this were a sitcom, I'd eventually come to see the error of my ways, get into the Christmas spirit and embrace the fat bastard -- real, fictional or symbolic. Yes, Christmas is a time for valuable lessons -- the spirit of the season and advertisers demand it. There is no watching mid-December prime-time lineups without coming away with at least one tutorial about life, love and what it all means. And there's nothing like seeing an old sitcom star in a Santa suit to get a curmudgeon into the spirit of things. (Look, it's Ed Asner! Aaaaw!)

Here is what I learned:

Situation: Homer and Bart accidentally blow up the church with a model rocket. Mr. Burns suggests running the church like a business, and has it rebranded as "a faith-based emporium teeming with impulse-buy items." Disgusted, Lisa goes shopping for a new faith that isn't so materialistic, and eventually turns to Buddhism. Marge, fearing for Lisa's soul and her chances of being accepted to heaven, turns to the Reverend for guidance. "Marge, you can save more souls with roller skates and E-Z Bake Ovens than with this 2,000-page sleeping pill," he says, holding up a Bible. Amen, brother. Marge wraps a pony for Lisa and places it under the tree. Conflicted, Lisa turns to Richard Gere. He tells her it's OK for her to celebrate any holiday, even his birthday, which is in August.

Comedy: The pony Marge wrapped for Lisa turns out to be a couple of Bart's friends in disguise, but at least she gets a cookie.

Christmas Lesson: Even if Christmas has been thoroughly corrupted, the important thing is to keep these thoughts to oneself in order to make the family happy.

Lesson 2: Santa doesn't care who is naughty or nice. He works for Target now.

Show: "Malcolm in the Middle"

Situation: When the boys "misbehave" by smashing all the glass ornaments against a wall (just like they floured the house the year before and set the tree on fire the year before that), Lois decides to cancel Christmas. She takes all the presents into the garage, holding Christmas hostage unless the boys behave perfectly until Christmas day. Eldest brother Francis is forced to visit Grandma, who hates Christmas, the family and everything else. Meanwhile, at home, the boys behave perfectly until they realize that if they give in, Lois will be able to do this every year, even on birthdays. They will show her they don't negotiate with terrorists! They steal into the garage to trash the presents, but discover that Lois has bought them everything they asked for. "She listened to us," Malcolm says softly, invoking the cardinal rule of boomer parenting. Meanwhile, Lois has a breakdown, convinced that she is a terrible mother for canceling Christmas. So what if the boys are a little "high-spirited"? Christmas is about middle-class entitlement and the right video games! When she and Hal sneak into the garage and find the kids trying to rewrap the presents, they pretend nothing has happened and celebrate Christmas early. Meanwhile, when Francis finds a closet full of gifts Grandma bought but refused to give away, he gives her a lecture on the spirit of Christmas. She stabs him in the leg with a knitting needle.

Comedy: If Grandma dozes off with a lit cigarette, it will burn through her nightie and her grandson will be obliged to get on his knees to retrieve it from between her legs. The humor is derived from the natural revulsion a grandson will feel toward his grandmother's body. Otherwise, the humor is unclear.

Lesson 3: Just because hard-asses are forced to work on Christmas, it doesn't mean they can't get into the spirit.

Situation: In an episode titled "Spirit," Sydney's double-agent cover is blown, and she very nearly spends Christmas in a secret SD-6 torture chamber. Her father tricks Sloane, the evil head of SD-6, into thinking the mole is somebody else, and Sydney's old pal Ruskin gets the SD-6 spa treatment instead. Meanwhile, Sydney briefs her supercute CIA handler, Vaughn, on her brush with holiday torture. He presents her with a Christmas present, which, being a CIA agent, he cannot hand her directly but must place on the ground between them. On Christmas Eve, Sydney is beeped into work -- which for her means putting on a blond wig and bikini and stalking one of Sloane's foes in Havana. This leads to an ill-timed family reunion, as Dad was in the process of negotiating with the same. Will Dad's second gift to Sydney be a bullet in the head? Tune in next week for the Christmas cleanup and more of that empty feeling.

Comedy: Hard-asses don't have time for comedy, though they are not above an occasional (brief) tender moment.

Christmas Lesson: Christmas is a time for family, which makes it a very inconvenient time. Please refrain from emoting as we are all just trying to get through this.

Lesson 4: Christmas is a time for family, which makes it a very inconvenient time for sex.

Shows: "The King of Queens" and "Ally McBeal"

Situation: On "The King of Queens," Carrie and Doug learn that Carrie only has one functioning ovary, and that she will be fertile for only three days during Doug's parents' annual visit. On a repeat of "Ally," Larry's ex-girlfriend (and the mother of his child) shows up, hoping to steal Larry away from Ally. Doug and Carrie try valiantly to perform their marital duty, but the familial intrusions are relentless. Ally takes out her sexual frustrations on carolers and other deserving scapegoats. Doug finds his mother's presence in the house deflating. Ally bites her own lip instead of fattening Famke Jansen's.

Comedy: Nobody gets any.

Christmas Lesson: Thanks to meddling family members, few people get what they really want for Christmas.

Lesson 5: Christmas is a time to reflect on personal failings, regrets and petty grievances.

Situations: On "Ellen," Ellen invites her Aunt Mary, a high-powered journalist, home for Christmas as a surprise to her mom, who feels underappreciated compared to her expensive-gift giving sister. On "Yes, Dear" Greg is upset that his baby son prefers Kim's fun parents to his own boring ones. On "Raymond," Marie receives a Christmas letter from a cousin that makes her family look bad, and decides to write one of her own.

Comedy: Lots of bickering and competition!

Christmas Lesson: Families hate each other year round; Christmas just brings out the worst in everybody.

Lesson 6: Christmas is haunted by the ghosts of sitcoms past.

Christmas Lesson: Allusions to shows we watched long ago, when we still loved Christmas, serve as useful reminders of how much we hate it now.

Lesson 7: Even if he is never mentioned by name, Jesus is everywhere, even in cassette decks and Jimmy Carter.

Situation: On "King of the Hill," Buck is arrested for drunk driving and Hank goes with him to his community service project, Habitat for Humanity. He winds up building the house himself, but fighting with his dad in the process and telling him he hates him. Bobby, upset, asks Jimmy Carter for help. Dressed in carpenter's overalls with the initials "J.C." on them, Jimmy uses his diplomatic skills to get Cotton and Hank to tacitly admit their love for each other. On "That '70s Show," Eric directs a Christmas pageant that spins out of control. After he is unfairly fired, his friends and the pastor come to see the error of their ways and give him the cassette deck he always wanted. The show ends in a Christmas tableau in which the cassette deck plays the part of the baby Jesus.

Comedy: If Jesus is X, and antiquated sound equipment or former presidents are Y, then Y(X) = Comedy.

Situation: On "That '70s Show," Kelso is mocked for his love of Christmas specials, and the Formans' neighbor Bob overdoes the Christmas decorations as does Ellen's mom on "Ellen." Robert Downey Jr. does the same on "Ally McBeal," but he has the presence of mind to be ironic about it.

Comedy: More allusions to Christmas shows past and a rich tapestry of cross-promotional cross-pollination elicit deep-seated Pavlovian laughter and merriment.

Christmas Lesson: Kelso learns it's OK to watch, Red returns Bob's decorations and hangs some of his own. Christmas is not just about the presents -- it's also about the tinsel, the musical cards, the annoying music and lots of TV.

Situation: On "Ally," Nelle's dad, who believes he is Santa Claus, files suit against his employer for wrongful termination. He used to be a lawyer who went out of town on Christmas, then he was a second-grade teacher, now he is Christmas all the time! On "Yes, Dear," second-fiddle "B" grandfather Tim Conway really is Santa Claus. On "Ellen," Ellen's co-worker becomes eerily omniscient when he puts on his suit before going down to the mall.

Comedy: Santa really does know everything -- which explains his absence from "Malcolm in the Middle." On "Ally McBeal," ice queen Nelle's heart melts in the presence of her father's adorable psychotic delusions.

Christmas Lesson: Nelle comes to an important realization while watching her father testify: This is all about her. And if that's not the perfect gift for our times, I don't know what is.