The girly calendars in the diesel shop of my youth were nothing like the Pirelli art photography -- except both feature sexy women. 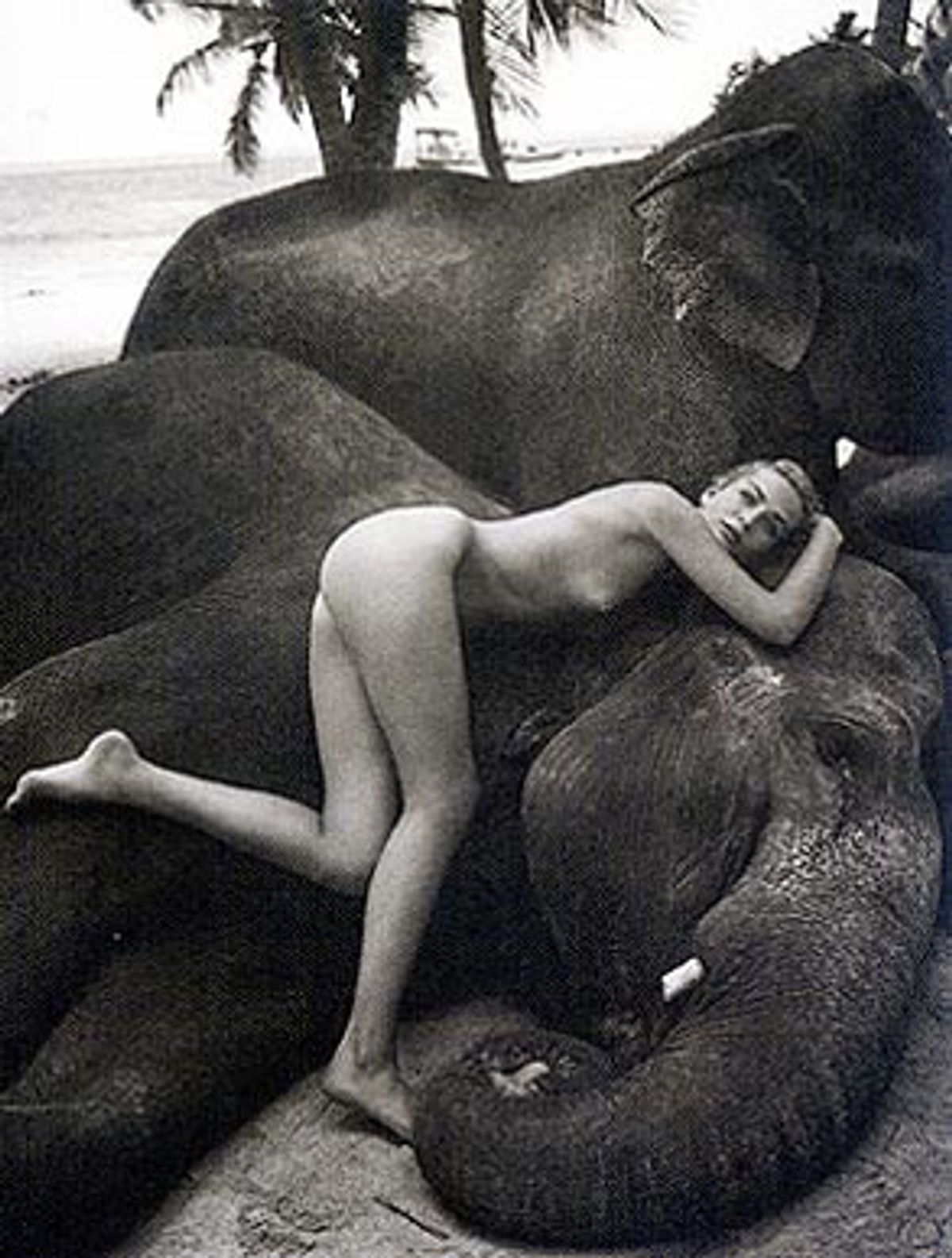 When I was 12, my best friend's father was a self-employed diesel truck mechanic; his shop was adjacent to their rural home. Throughout the week, great trucks -- Peterbilts, Kenworths, White Freightliners -- rambled down the long dirt driveway to have their ailments attended to.

For boys of the age we were, those massive macho machines were rolling icons, their big chrome-laden bodies and tough noises tickled our testosterone something fierce, and supercharged our fantasies of power and motion.

But the trucks we most liked to see approach come Christmastime were those of the suppliers -- Cummins, Pennzoil, Snap-on tools. Because in addition to engine parts, lubricants or the swing-out displays of shiny new socket sets and open ends and torque wrenches and feeler gauges, they delivered calendars, glorious calendars. And on those wonderful calendars, wrapped around giant diesel engines or tenderly grasping a foot-long ratchet handle, were photos of some of the most spectacular women we had ever laid eyes on. They looked so friendly and inviting, all smiles, their breasts and bottoms packed into the snuggest, cleanest coveralls we'd ever seen, or bursting out of bikinis no bigger than the handkerchief-size rags that were delivered in tied bundles each week by another supplier.

My friend's father posted the calendars throughout the shop and punctually flipped to the next page -- and a new picture -- on the first of every month. The presence of those women's photos made being around all that big-time rebuilding and tuning-up just that much more exhilarating. But one calendar we never got to see is one that, frankly, might have seemed a little out of place, a bit too hoity-toity to share wall space with a head gasket for a Diamond Reo -- the cheesecake-cum-art calendar published by Italy's Pirelli tire company. Maybe if the shop had been a Maserati garage in Turin, things would have been different. Maybe not; even in Italy and Europe the calendar is made available only to "a privileged list of corporate customers and VIPs." In any case, more than three decades on, I've recently gotten to see what we missed.

A new book, "The Pirelli Calendar: 1964-2001," collects over 35 years' worth of the tire company's legendary (in some circles) calendar photos, often accompanied by a short statement from a writer, a photo critic or from one of the distinguished photographers the tire manufacturer hires to shoot its nudes -- Herb Ritts, Bruce Weber, Richard Avedon, Annie Leibovitz and Bert Stern among them. The calendar, the book publisher says, has become "a paradigm of its genre," a phrase I never once heard uttered in reference to the calendars in my neighbor's diesel garage.

Paradigm or no, the Pirelli photos as a collection are something of a social history. The earliest calendars had nothing (or very little) in the way of nudity. The first year -- 1964 -- featured dreamy women strolling about in modest two-piece bathing suits, capris and sleeveless tops or swaddled in terry cloth robes.

By the following year things had progressed (or regressed, depending on your point of view) to allow one shot of a shapely tush in a striped one-piece swimsuit. For the '66 calendar, photographer Peter Knapp explains, "what we did ... was already the limit of what you could do then, and the models were careful." Knapp captured a hint of a breast under an open shirt and peeked down some bras, but not too far.

For the 1969 number that year's photographer, Harri Peccinotti, found that "everywhere you turned on the beach there were incredible-looking girls, just very sexy girls, and they were doing whatever they felt like." Whoopee! So who needs models? Off to the beach Peccinotti went to photograph young women sunbathing, licking Popsicles, sucking on cigarettes, holding soda bottles to their teenage lips and so on. And it was the time of the multiple image -- remember Warhol's prints and all that split-screen stuff in the "Woodstock" film? -- which the '69 calendar uses throughout. Still, in an era when women were dropping their tops in Broadway plays like "Oh, Calcutta," the Pirelli ladies were quite modest.

But then, maximum flesh exposure has never really been the point of the Pirelli photos. The tire company has always aspired to bring a little art and class to its girly calendar -- this sex ain't for drooling grease monkeys, it's for the uptown blokes who own dealerships, and other big shots. Tit shots are okey-dokey as long they pack some pretension of art or drama. Those who just want to see as much naked female skin as they possibly can are no better than, well, testosterone-crazed boys -- they don't deserve to gaze upon the classed-up gals that Pirelli offers. Let 'em go down to the local garage.

With the 1972 calendar, photographer Sarah Moon started to steer Pirelli toward a concept approach. Moon's gauzy pictures depict David Hamilton-esque models cavorting in early-20th-century lingerie; a scene from the Ladies Lounge in "The Great Gatsby."

Then, finally, in 1984, photographer Uwe Ommer makes the tire-breast-buttocks connection, painting the pneumatic models with a tread pattern. The tire tread reference shows up again in 1985, '86, '88 and other years. And using one theme -- dramatized by the models' costumes and makeup (sometimes full body) becomes, with few exceptions, an annual event.

In subsequent years there are athletes who look like they've leapt out of Leni Reifenstahl's film of the 1938 Olympics, the signs of the zodiac, historical figures, African tribeswomen and, in 1992, Clive Arrowsmith's dazzling hybrids inspired, apparently, by the Chinese lunar calendar moon signs -- a dragon-woman, a tiger-woman, a horse with the nude painted body of a human female, goat, rooster and the rest.

But the most interesting of the bunch is Bruce Weber's 1998 effort for Pirelli. For the calendar's 25th anniversary issue, he dispensed with the too-easy parallels, affectation and self-consciousness of some of the earlier layouts and, for the first time, included men. Dressed, they're still captivating because they're B.B. King, Bono, John Malkovich, Robert Mitchum and other artists. Now, if this one had hung on the long-ago walls of that diesel mechanic, it would have stood out because it evokes pairings that are fun, intriguing and somewhat mysterious. In addition to the women in various states of undress, there are hot dogs and corn being barbecued (Patricia Arquette wielding the tongs), some goof in a gorilla suit about to gnaw on a model and several languorous golden retrievers (completely nude).

But the one shot I think many 12-year-old boys (and some who are older) would vote as the best photo in the entire book is of a naked woman stretched across the great gray cheek of an elephant who is lying next to another elephant on a faraway beach with a palm tree in the distance and the sea beyond that. There's a boat, too. It's pulled up on the sand of this perfect desert island that no lad of any age could resist -- tropical waters, swaying palms, friendly pachyderms and a woman who's found a most novel way to relax. What's not to like?