Hugh Jackman, sexy and unflappable, is the highlight of this time-travel romance with Meg Ryan. 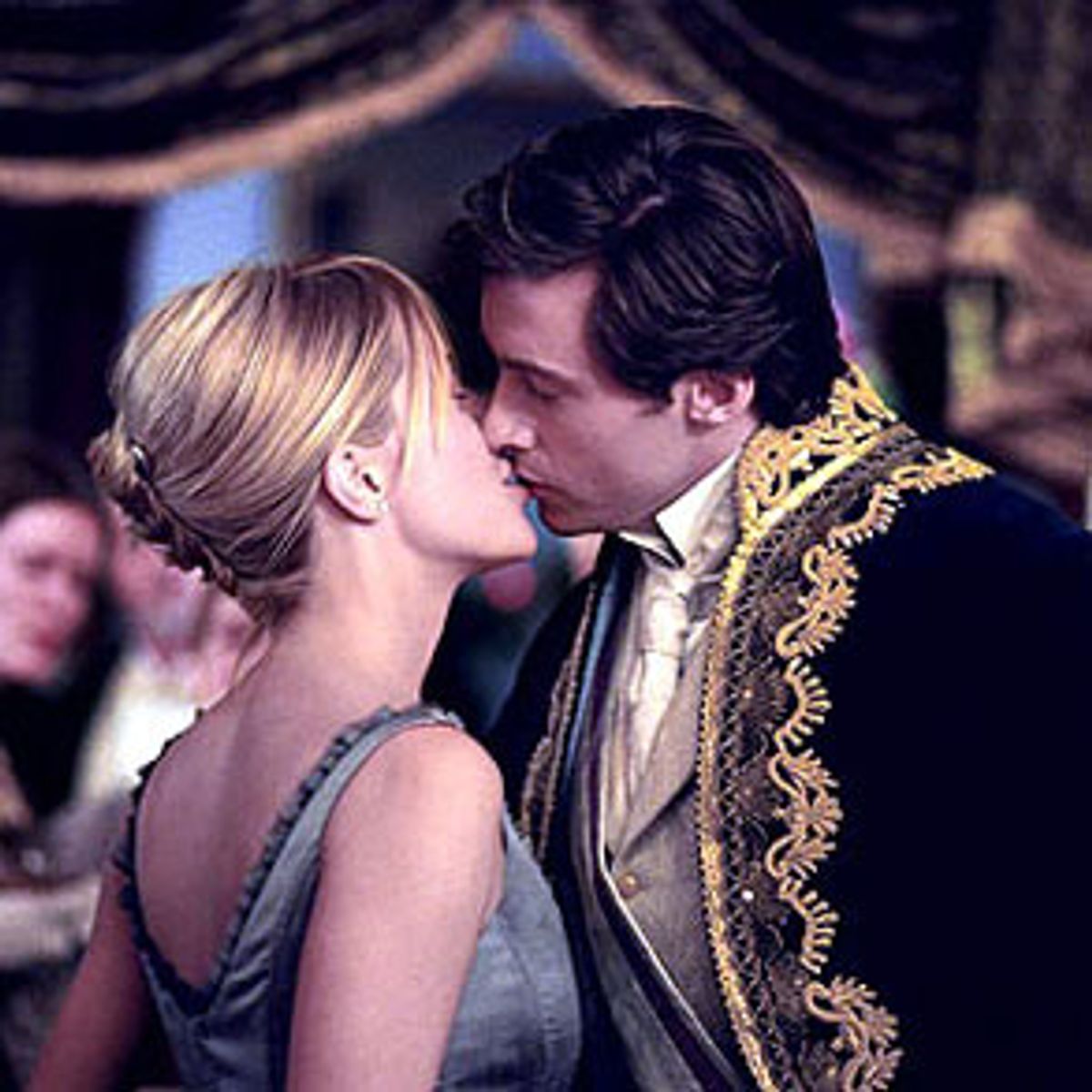 In this time-travel romance, Hugh Jackman plays Leopold, a dashing English duke and inventor from 1876 who's transported to present-day New York. There he encounters the wonders of safety razors and shaving foam, toasters and automobiles, sweaters and trousers like the ones you can buy at any J. Crew. It wouldn't be so bad, if only his new next-door neighbor weren't Meg Ryan.

Of course, it gets much worse than that when he falls in love with her. Director James Mangold ("Cop Land," "Girl, Interrupted") doesn't have a light enough touch to keep "Kate & Leopold" aloft, nor does he have what it takes to counteract Ryan's 21st-century pixie routine. You're always conscious of Mangold's great efforts to sweep us off our feet, to charm and tickle and ultimately wow us: He's the equivalent of the excessively cheerful guy you encounter on the street, whistling and jingling the change in his pocket, who thinks he's spreading his good cheer to the world when really he's just annoying the hell out of you.

The premise is gimmicky, but that doesn't necessarily mean it couldn't work: Ryan plays Kate, an assertive, by-the-books market-research executive who has recently broken up with her scientist boyfriend, Stuart (Liev Schreiber), who lives in her apartment building. You know she misses him, but mostly she seems merely annoyed that she had to support him for the four years they were together. Stuart is pretty brainy, though. He has discovered a hole in time that's located somewhere just off the side of the Brooklyn Bridge. He travels back to 1876 and, by accident, brings the duke Leopold -- the inventor of the elevator -- back to the present with him.

Leopold at first befuddles and then impresses everyone with his noble bearing and courtly manners (not to mention the way he combines his 1876 waistcoat with, say, one of Stuart's dress shirts and neckties -- mixing contemporary clothing with vintage, he's right in tune with Vogue magazine). Kate's ne'er-do-well actor brother Charlie (played with goofy charm by Breckin Meyer) gets along famously with him -- he assumes Leopold is a fellow actor because he knows the words to the songs from "Pirates of Penzance." And slowly but surely Leo works his magic on Kate, at first trying to protect her from what he thinks are ignoble advances on the part of her boss (Bradley Whitford), only to realize that he's smitten with her himself.

The problem with "Kate & Leopold" is that although this is supposed to be a romantic comedy, the best scenes are the ones in which there's no Ryan. A sequence where Leo and Charlie go out drinking, and Leo advises Charlie on the best ways of winning a woman's heart, has a loose, easy rhythm to it; for a few moments the movie perks up and turns into something delightful.

But even though Ryan has made her reputation as a romantic-comedy actress, she simply isn't a yielding enough partner to make the chemistry crackle. Screenwriters Mangold and Steven Rogers have made an effort to give her character some prickly edges, and Ryan tries hard to oblige. You see her working overtime to throw off her terminal cuteness once and for all, but that's just the problem: The amount of effort it takes is transparent.

And no matter how hard she tries, Ryan just can't be something she's not. She's the sort of actress who telegraphs most of her emotions through her reindeer-button nose; whatever's left gets shipped out via her crinkle-eyed smile. With her moppet hair and a stride so boyishly awkward and bowlegged it must surely be an affectation, she radiates cuteness of the worst kind. Barbara Stanwyck, perhaps the greatest romantic comedy actress of our century, must be rolling her eyes in her grave.

That's not to say that Ryan has never been good in a romantic comedy: At times, as in Griffin Dunne's 1997 "Addicted to Love" and Lawrence Kasdan's 1995 "French Kiss," she's been able to corral her tireless perkiness and throw it off in genuine neurotic sparks. I'm not sure why she can't pull it off here -- it may be that she knows in her heart (or thinks) that audiences prefer a Meg Ryan who's edgy only on the surface.

It's a shame, because Hugh Jackman deserves a movie partner who's willing to take chances. This is his second lead performance in a romantic comedy this year (the first was the misguided and uneven "Someone Like You," with Ashley Judd), and his third lead overall (he starred in the otherwise dreadful "Swordfish"). None of these three are particularly memorable movies, but as far as Jackman is concerned, it doesn't matter. On the basis of the four movies I've seen him in (the first was the wonderful "X-Men"), I've decided that he belongs in a very small, select group that I call the Teflon Actors -- people who deliver consistently terrific performances, no matter how bad the material.

In "Kate & Leopold," Jackman gets lots of stiff, awkward dialogue: "You are intoxicated!" he informs Charlie at one point, speaking in a manner that was commonly used before we got hip to the idea that contractions are our friends. And yet somehow, he makes it believable. Jackman has so much dignity as an actor that he never even stops to think he might look silly in this role -- and so he doesn't. He inhabits it as fully and as generously as possible.

That's why, when he looks at Ryan, his eyes betraying shyness, lovesickness and joy all at once, he seems wholly timeless -- not like a 19th-century character stuck awkwardly in 2001. He's been perfectly cast in this picture: His nose alone is magnificently noble, and his carriage is, too.

And the movie's silliest scene -- or the one that has the biggest potential for silliness -- ends up being remarkable because of him. When a purse-snatcher grabs Kate's bag and dashes off into Central Park with it, she takes off after him, but can't catch up. She turns to see Leo, mounted on a horse borrowed from a nearby horse-and-buggy outfit, galloping valiantly to her aid.

You can't blame the movie for milking any excuse to put Jackman in tight breeches and boots -- it's a look that works for him, there's no getting around it. But what's more amazing is how natural, and how wonderful, he looks on the back of that horse, galloping boldly into the midst of what should be a completely absurd scene.

He scoops Kate up, which spoils the effect: As a hardened city girl who's uncomfortable on the back of such a fine steed, she windmills and mugs as she scrambles into place, making herself the star of the moment, when all you really want to do is watch him.

Jackman is astonishing in "Kate & Leopold," not least because he fills out a flimsy, far-fetched character into a person you feel as if you know. At one point, entranced by the horses and carriages he sees lined up along Central Park South -- unlike automobiles, they're familiar and comforting to him -- he suggests that he and Kate use one of them as transportation. "Those are for tourists," she informs him matter-of-factly, although not unkindly, as she rushes for a cab.

What's odd is that in "Kate & Leopold," Ryan is the one who seems like a tourist, pasted into a movie that doesn't feel natural or right. But Jackman looks and acts completely at ease, even though he's the one wearing antique clothing. As an actor, he couldn't be a man out of time if he tried.