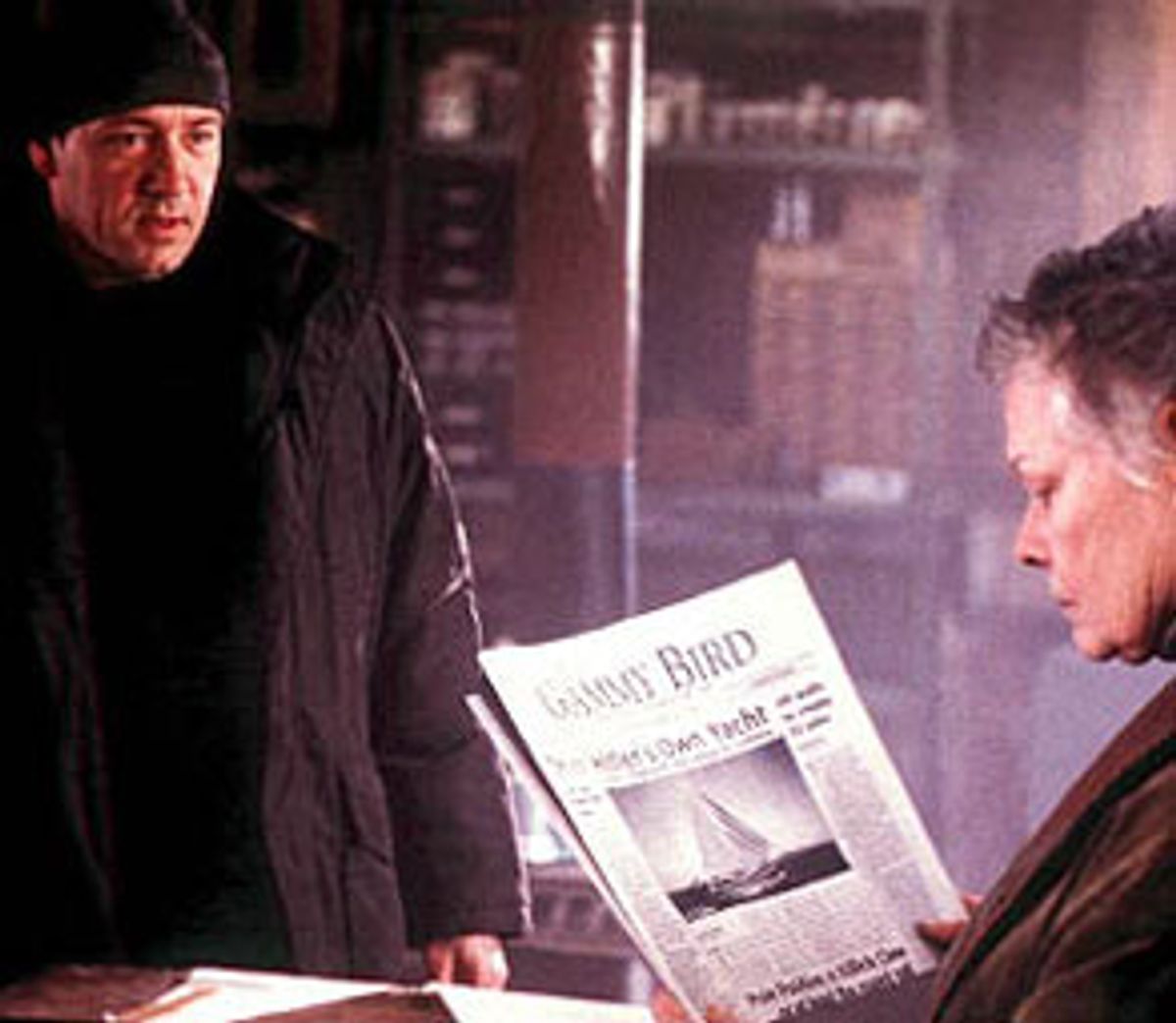 Coming after "The Cider House Rules" and "Chocolat," "The Shipping News" is further proof that Lasse Hallström has a real talent for smooth, craftsmanlike mainstream moviemaking. It's obvious why his movies get generally decent reviews and do respectable business. Apart from their attention to the old-fashioned virtues of story and character, Hallström's movies offer a respite for audiences weary of pop junk. They're intelligently made and they're about adult emotions, and since Hallström works beautifully with actors, you can be assured of several good performances in each movie.

He's not a flashy director. He works to serve the material. Which is not to say that he's incapable of flourishes. Set and shot in rural Newfoundland, "The Shipping News" avoids the visual bleakness that would be so easy to fall into with these roughhewn, and often icy, exteriors. The cinematographer Oliver Stapleton finds a rough beauty in the bays and coves, some richness in the weatherbeaten buildings and weatherbeaten people. And the movie features several memorable images: a house being pulled by rope across frozen water; a convertible pulled from the deep, the dead, seat-belted occupants hanging from the front seat like broken marionettes.

Like his last two movies, "The Shipping News" was taken from an acclaimed popular novel, this time E. Annie Proulx's Pulitzer Prize winner. But where "The Cider House Rules" was one of the most exquisite examples of classical Hollywood filmmaking in years (and one of the most subversive), "Chocolat" was no more than a trite, pleasant trifle.

"The Shipping News," well made as it is, isn't even up to that standard. It's the story of Quoyle (Kevin Spacey), an ink setter at an upstate New York newspaper who loses his parents (double suicide) and estranged wife (car accident) in short order and, with nothing more to lose, moves with his aunt and daughter to his family home in a small Newfoundland fishing village. He finds work at the local paper, working his way up from covering the weekly car wreck to the stories of the boats coming into port, gradually fitting into the life of the town, and forming a friendship with a young widow (played by Julianne Moore) along the way.

That's the plot, but I've no idea what "The Shipping News" is supposed to be about. The moral is supposed to be about finding the place where you belong, or learning that a second chance is possible, or making peace with the past (the flashbacks that reveal the past are handled by Hallström with fleet, vivid economy), or some such sampler-worthy bromide.

Adapted by Robert Nelson Jacobs, the material is both naturalistic and quirky in the manner that nearly always suckers the Pulitzer committee (apologies to winners Michael Chabon and Jumpha Lahiri, who are both above the company they've been chosen to keep). The characters have names like Wavey Prowse, Agnis Hamm, Tert Card, Jack Buggit, Beaufield Nutbeem, Petal and Bunny. (All my grandparents came from Newfoundland and I've got plenty of distant cousins still there. And if any of them had names like that, I'd think that my ancestral home was more likely an old episode of Fred Allen's radio show.) The writing encourages us to look at the characters as quaint and folksy, each with their lesson to teach on contentment and perseverance.

Hallström and his actors do what they can to dry out that conception. You'd never know from "The Shipping News" that Newfoundland has cities and a university and culture, but Hallström goes as easy as he can on the provincial color. It's an important achievement because despite being something like the national punch line -- Newfie jokes are to Canada what Southern redneck jokes are to America -- Newfoundlanders are blunt, irascible and often terribly funny people. (On my 40th birthday, an uncle of mine who lives in St. John's called me up to remind me of what my grandfather, in his later years, said about sex: "It takes me a little longer, but I don't begrudge d'time.")

What's notable in "The Shipping News" is how Hallström avoids turning the characters into the inhabitants of some outpost petting zoo. The Newfoundland actor Gordon Pinsent, as one of Quoyle's newspaper colleagues, plays a local character with as much slyness and salt as the role can muster. Cate Blanchett isn't as lucky in her small role as Quoyle's floozy wife Petal. The role is a barfly conceit, and though Blanchett plunges in, the clichés defeat her.

Julianne Moore comes through with one of the most direct, if simplest pieces of acting as Wavey Prowse, the young widow Quoyle is attracted to. Moore is so good at the inchoate turmoil of neurotic characters that I fear sometimes she'll never get to relax onscreen. She does here, nailing the peculiar hard lilt of the Newfoundland accent, and more importantly, the place's slightly mocking humor.

As Aunt Agnis, Judi Dench seems to belong to the setting so fully that, for me, watching her was eerie, as if I were seeing one of my relatives incarnated on the screen. She's got the no-nonsense hardness that comes from a life in an unforgiving locale. When she dumps her dead brother's ashes down the privy and then sits down to pee on them, she's so matter-of-fact that you feel she's emitting a curse that will chase the bastard into the afterlife. The merciless precision of Dench's gaze is suited to a Newfoundlander who's seen more than her share of tough times, which only makes the rough compassion that comes out of her count all the more.

Wavey has a little boy who, because of complications at birth, is what's kindly referred to as "slow." But it's Kevin Spacey who appears to be mildly retarded here. His Quoyle, with his delayed, mush-mouth diction, is in a daze from which he never seems to awake, not the best thing for a character meant to be reawakening into a new life. Spacey's performance is all conceit, and I didn't believe a minute of it.

The disappointment of "The Shipping News" is perhaps inevitable for a director who submerges his craft to his material. Hallström rises or falls on the quality of what he's working with. But there are plenty of other big pictures around like "The Majestic" and "A Beautiful Mind" -- both disgraceful pictures -- that show nothing like its care. Hallström is very likely to have a career of highs and lows, but a mainstream director who can turn in a clean, efficient job without making you feel like your brain has turned to jelly isn't the worst thing mainstream movies could have right now.