Robert Altman delivers a heavily populated, slyly made romantic (and murderous) romp for the holidays. 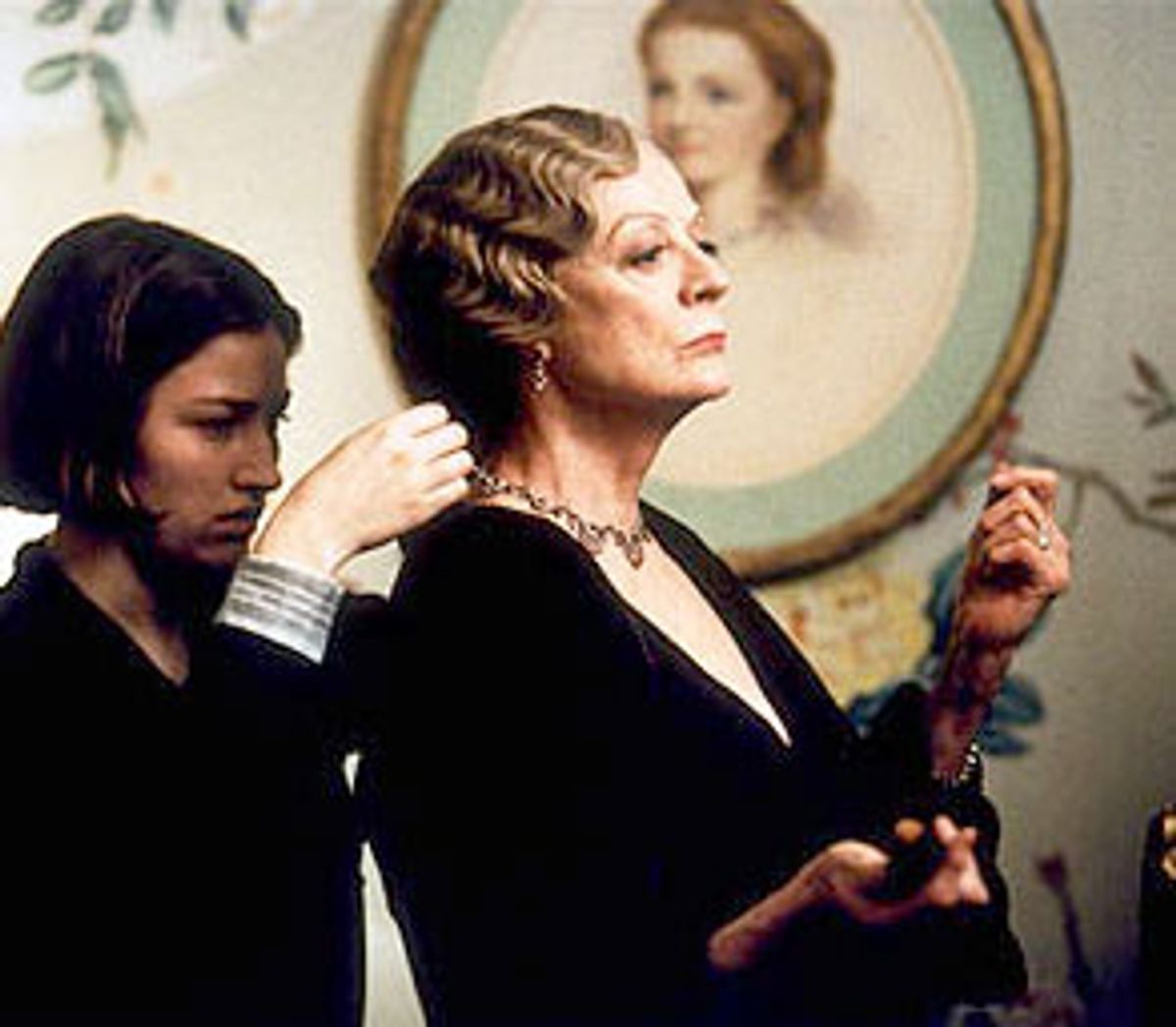 Robert Altman's "Gosford Park" isn't much more than marvelous entertainment -- but then, that's a lot right there. Depth is always admirable in movies, but in many ways lightness is harder to achieve. It's even more difficult when you've got a cast of some 30 characters, with a great deal of hobnobbing, canoodling and sniping (not to mention murdering) crisscrossing every which way among them.

It's a given that in any Altman movie each character in even a very large group is distinct and whole. (If an Altman movie didn't achieve at least that much, it wouldn't be an Altman movie.) And yet, even though that meshing of discrete and fully rounded characters is no less than we expect from Altman, it's a treat to get it nonetheless. Maybe it's something we've become parched for in the movies these days. Or maybe it's simply that it's great fun to find yourself plunked into the middle of a party, one at which anything might happen.

In the case of "Gosford Park," set in the English countryside in the 1930s, that gathering is a shooting party organized by the irascible and remote Sir William McCordle (Michael Gambon) and his languid, tweedy, much younger wife Sylvia (Kristin Scott Thomas). The guests include Sylvia's two sisters, Louisa (Geraldine Somerville) and Lavinia (Natasha Wightman), and their respective husbands Raymond, Lord Stockbridge (Charles Dance) and Lt. Commander Anthony Meredith (Tom Hollander). (The titles matter because this is, after all, an English murder mystery.)

Other guests include the (real-life) composer and matinee idol Ivor Novello (Jeremy Northam); a self-absorbed and howlingly American movie producer (Bob Balaban); and the imperious aunt of Sylvia and her two sisters, Constance, Countess of Trentham (Maggie Smith).

Nearly all of the visitors have, of course, brought servants, who interact with the guests both in subtle, glancing ways (like near-invisible atoms bouncing off larger chunks of matter) and in more intense, resonant ones (like trusted family members or even lovers). Alan Bates is Jennings, the butler, who, along with housekeeper Mrs. Wilson (Helen Mirren), keeps the household running smoothly. There's also Mrs. Croft, the cook (Eileen Atkins), and beneath those three are an array of valets and personal maids -- played by actors including Emily Watson, Derek Jacobi, Kelly MacDonald and Clive Owen -- who fan out and burrow into the inner workings of the household as well as into the most intimate business of its inhabitants and guests, often without being seen or noticed. Their own business, however, is just as interesting, if not more so.

And of course, everyone has secrets -- you just don't know at the beginning who's harboring the biggest ones. And yes, someone gets killed. "Gosford Park" is "The Rules of the Game" reimagined as an English murder mystery. The conceit works because although Altman and screenwriter Julian Fellowes insist on a high degree of stylishness and fun, they also see their characters as human creatures with flaws and foibles and insecurities.

They're both stylized and fleshed out -- the marvelous Emily Watson's housemaid, for instance, is the picture of a cutie-pie working-class girl who just may have the goods to become a movie star, but she also gives us plenty of cues about her thoughts and feelings simply in the way she averts her eyes or pads wearily down to the bath in the servants' quarters.

In fact, most of the pleasures of "Gosford Park" come not from trying to figure out whodunit but from watching the characters take shape before your eyes, their tics, petty quarrels and deceits -- and their basic humanity -- molding themselves into high relief. Since Altman is dealing with such a large ensemble here, not all of the characters are equally memorable. But even the minor ones have at least a flash of distinctiveness.

The picture also has a grand and wry sense of humor, particularly in the way Balaban's hotshot movie producer, bored by the tea-drinking noble folk around him, keeps rushing to the phone to ring Hollywood with his latest inspiration for the cheapie Charlie Chan mystery he's working on, oblivious to the intrigue that's unfolding all around him.

Maggie Smith and Kelly MacDonald are wonderful as a countess-and-maid team, with Smith, like a schoolgirl draped in matronly jewels and furs, begging the fresh-faced MacDonald (a fine, sweetly unconventional actress, also seen in "Trainspotting" and "Two Family House") for the latest gossip among the servants. (Smith, in particular, is wonderful here; she gets laughs with her light, squirrelly touch -- you sometimes forget what a terrific comic actress she is.) Jeremy Northam is sleek and witty as Novello, the most assertively charming house guest, always ready to have a seat at the piano whether people want to hear him play or not.

Helen Mirren's head housekeeper might have been a caricature -- Mirren sure works that ramrod carriage and cracker-crisp enunciation -- but by the end of the movie you see her reserve as something richer and more complex. And with his brooding good looks, occasionally capped off by a know-it-all-smile, valet Clive Owen wears his dignity like a silk cravat. He's a downstairs Heathcliff.

"Gosford Park" is filled with small but splendid performances, like miniatures painted on ivory: As Sir William and Sylvia's daughter, Camilla Rutherford shows off a powdery vulnerability that's nonetheless grounded in intelligence and decency; Claudie Blakley is the awkward, misfit house guest who can't afford a maid, causing the others to talk behind her back, but whose lit-up face alone reveals more about her than a weekend's worth of yapping does about the rest of them.

Shot by Andrew Dunn, the whole picture has a rich, misty, slightly faded look, and Altman's characteristic overlapping dialogue means there's usually a lot going on at once. The revelations at the end may not be earth-shattering, but that's not the point. "Gosford Park" is so craftily made that it can't help pleasing. And although Altman is a great filmmaker, this movie doesn't have the feel of a grand and imposing work of art being handed down to the little people. It's more like a sly wink between the filmmaker and his audience. The only thing separating the upstairs and the downstairs is, after all, a set of stairs.