It was a very strange year

In movie screens in 2001, the nightmares took over, with the exception of one wizardly epic.

By the Salon arts staff 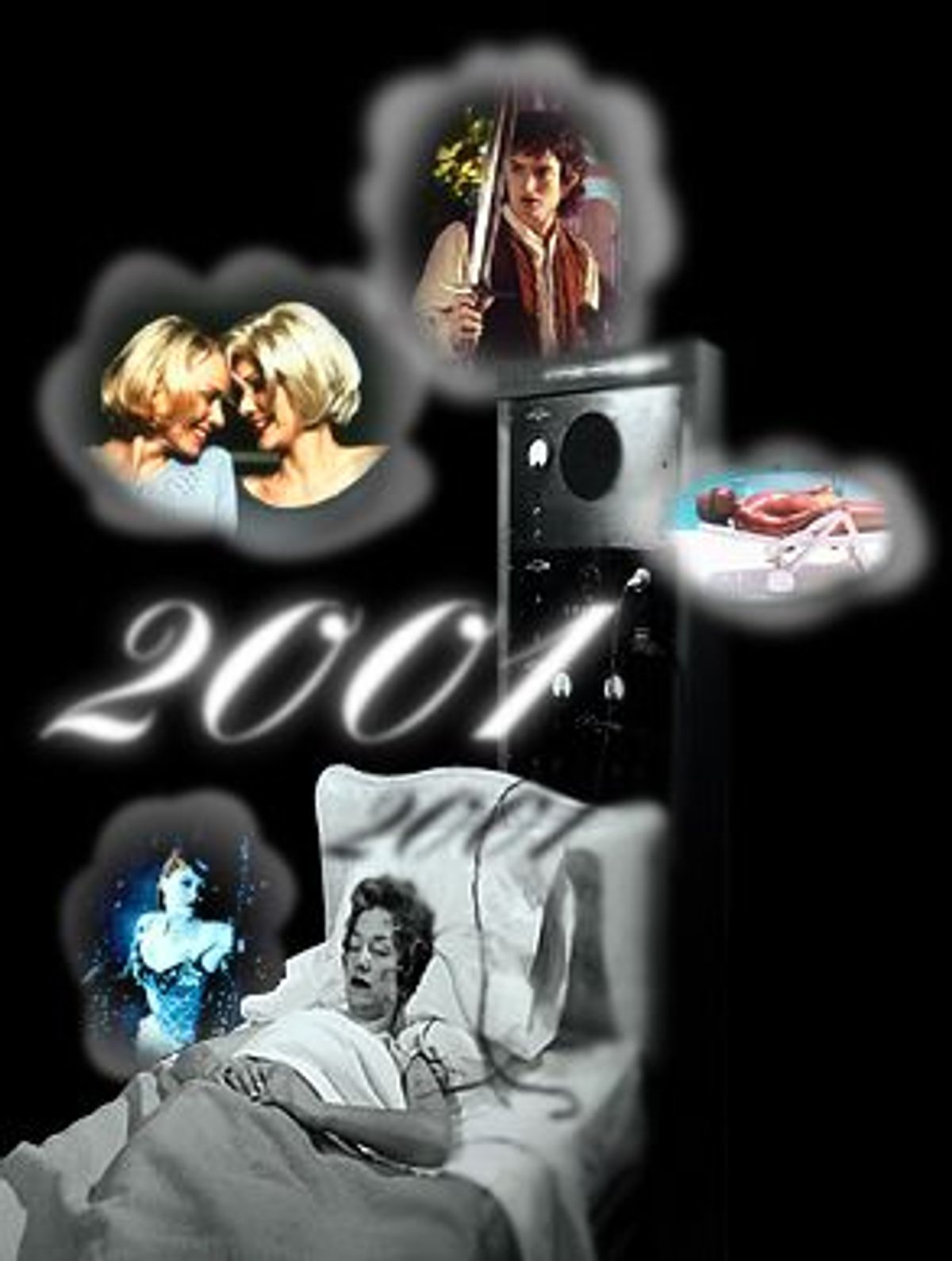 Although we can all find something to complain about, by its final weeks 2001 turned out to be a reasonably enjoyable year for movies. It was a year in which moviegoers rejected the most heavily hyped pictures, like "Pearl Harbor," and instead fixed their focus on movies that came out of left field: One of the year's most pleasingly creepy pictures, Alejandro Amenabar's marvelously quiet "The Others," became a surprise hit, without any flashy effects or gore. It held audiences with the simplest means available: old-fashioned suspense. And "Memento," a psychological thriller with its story told back-to-front, certainly got moviegoers talking. Even those who didn't care for it probably found themselves drawn into vigorous dinner-table discussions about its pros and cons, and no matter what the movie in question is, vigorous discussion is always a comforting reassurance that movies can still enrapture and engage people.

Does any of this mean that moviegoers are becoming more discriminating, or at least increasingly wary of studio-generated hype? It might. Look at "Harry Potter and the Sorcerer's Stone," which generated massive amounts of buzz after Christopher Columbus was signed on to direct it. Much of that buzz was fueled by the fact that J.K. Rowling's novels have, deservedly, become some of the best-loved books of our time. More than a month after its release, the movie is still selling tickets -- but do you hear many people still talking about it?

If you measure impact in terms of box office (never a good idea to begin with), "Harry Potter" is a success, but whether it has really captured the hearts or imaginations of moviegoers is open to debate. It's far too early to tell if Peter Jackson's "The Lord of the Rings: The Fellowship of the Rings" will fare better in terms of actually getting people excited about the actual movie, as opposed to the mere idea of it -- but our guess is that in the space of just a few weeks, it will be pretty clear which one is the real "hit."

The year also gave us a number of well-made, sophisticated, subtle dramas like "The Deep End" and "In the Bedroom," pictures that traded on intensity instead of flashiness. Art-house movies ran the gamut from heart-warmers like the candy-colored French "Amélie" to the much more visceral "Amores Perros," from Mexico. With our intensified focus on the Middle East, Americans have more reason than ever to take a look at some of the Iranian imports, among them "The Circle," "Baran" and "Kandahar."

It was a great year for first-time filmmakers. Richard Kelly's "Donnie Darko" may have been the most original picture no one saw this year. With "Sexy Beast," Jonathan Glazer took a whiskery premise (it's about a retired thief who's persuaded to pull off just one more heist) and turned it into something sharp and witty.

If moviegoers sometimes stumbled out of theaters mumbling to themselves and scratching their heads -- perhaps excitedly so -- the effect was often purely intentional. Puzzle movies like "Memento," "Vanilla Sky" and "Mulholland Drive" had moviegoers unraveling their plots and schemes for days afterward; "Memento" and "Mulholland Drive" lured some viewers back for repeat viewings. Steven Spielberg's "A.I." may have befuddled moviegoers for different reasons: Weighty, ponderous and well-intentioned, it left even many diehard Spielberg fans turning its possible meanings -- and the significance of its ill-fitting ending -- over and over in their minds.

Fans of computer animation had plenty to look at, between "Shrek," "Final Fantasy: The Spirits Within" and "Monsters, Inc." And with "Waking Life," Richard Linklater gave us a different type of animation altogether: The movie was shot and edited as live action, converted to animation via a process called "rotoscoping," and then painted, frame by frame, by teams of computer artists.

Some movies made us laugh ("Shallow Hal," "Legally Blonde") and others made us wince ("Freddy Got Fingered"). Several former indie darlings who have segued into the mainstream also made notable appearances: Steven Soderbergh gave us a lively remake of "Ocean's Eleven"; Wes Anderson presented us with the oddball-family comedy "The Royal Tenenbaums."

And as always, there were those movies that perhaps did well enough at the box office but faded from moviegoers' memories within days. Into that gently steaming heap go "Swordfish," "3,000 Miles to Graceland" and "Domestic Disturbance."

No year of moviegoing would be complete without such instantly forgettable pictures. But by and large, 2001 had more than its share of movies we can actually remember we've seen -- and better yet, some that will actually resonate for years to come. To that end, let's have a look at the very best 2001 had to offer. And then, as we always should, let's move forward in the hope that 2002 will be even better.

Here are top 10 lists for the year from Salon's film critics:

Charles Taylor: From Middle-earth to Mulholland Drive
The best in movies, 2001: The world turned to the tune of sexy beasts and even darker dreams.

Stephanie Zacharek: Hobbits and courtesans and David Lynch, oh my!
Movies from Sweden, France and some very weird imaginations enthralled us in 2001.

By the Salon arts staff

MORE FROM the Salon arts staff