Land of the rising homemaker 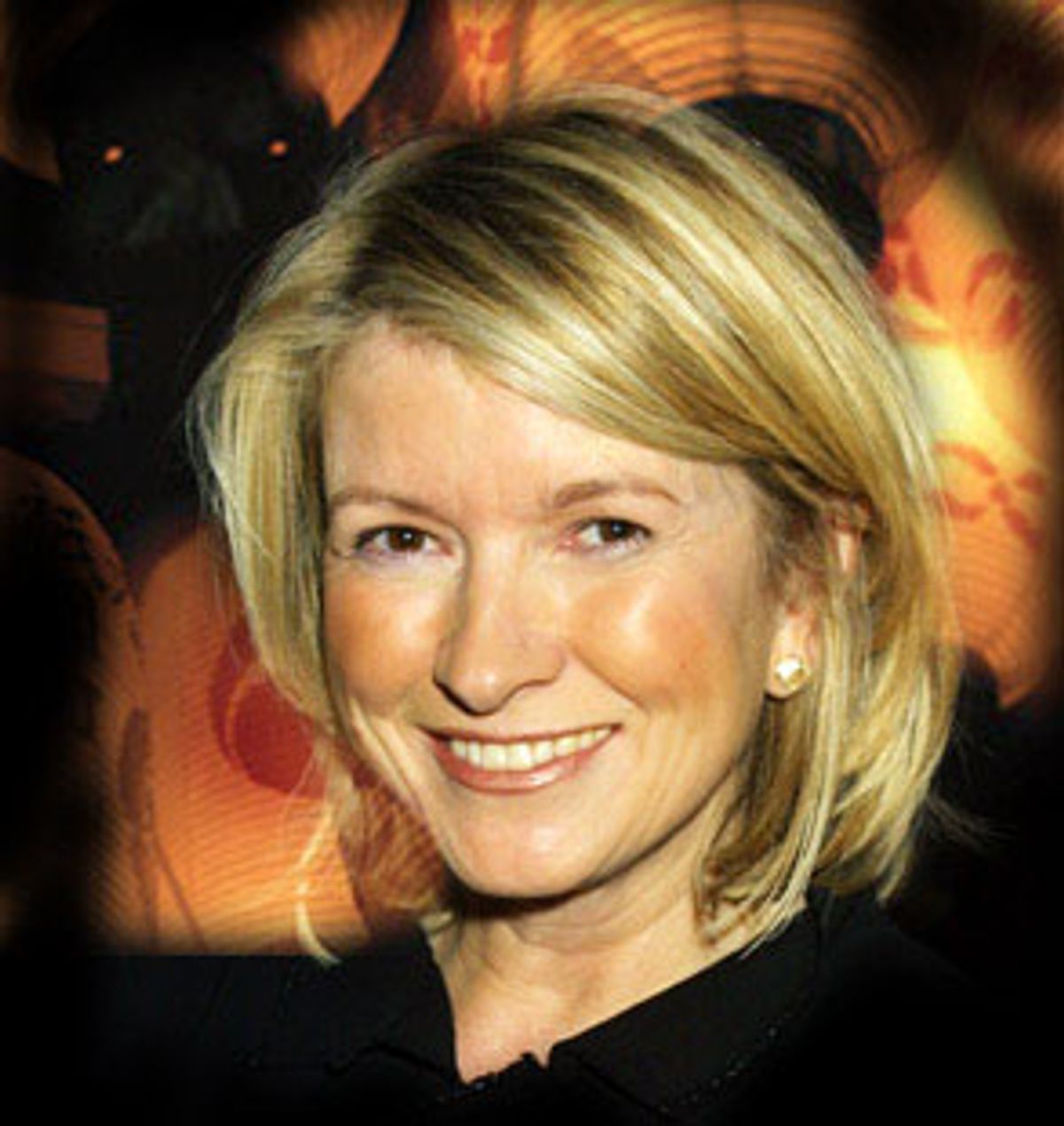 On the morning of Sept. 11, which was evening in Japan, Martha Stewart was dining out in Tokyo. As the world watched two jets raze New York's tallest skyscrapers, Stewart surveyed the damage to her plate: grease stains. The best tempura, she observed to her Japanese hosts, disappears without a trace.

While foreign businesses have been tripping over themselves to escape Japan's gloomy prospects -- Burger King, Merrill Lynch and now Sephora have all left or begun to -- the newest overseas arrival is landing with an entire fleet. In what might seem like a retail kamikaze mission, Stewart's multifaceted marketing operation, Martha Stewart Omnimedia, is crashing the Japanese-style market.

"She has a thing for Japan, she really does," explains Yasushi Okue, general manager of the LaLa channel, Japan's women-oriented cable network, which started running Stewart's syndicated show (her initial incursion) up to four times daily in October 2000. The show now has a million viewers, most of whom had never heard of Stewart before they tuned in.

"Two days after the 11th, we had a promotional event scheduled, a tea party at the Westin Hotel between Martha and her viewers," Okue says. "We thought for sure she'd cancel, because she has a daughter in New York, you know. But she stayed. She met with everyone. She's really devoted."

Stewart's devotion to her business is no surprise to Americans, of course. The parody of her corporate ice queen persona is as common as her first name in U.S. households. But here in Japan, the most common response to her name on the ad-plastered, recession-weary thoroughfares of Tokyo is a polite but urgent: "Martha who?"

The million who already watch Stewart dispensing tips on cable television are about to see the American homemaker advising them everywhere. September saw the first Martha Stewart products hitting Japanese department store shelves, together with posters of a beaming, blue-jeaned Stewart in motion, toting an enormous leafy wreath. The grand opening of "Martha Stewart Yurakucho," Stewart's entry into Tokyo's chic and pricey Ginza district (Japan's Fifth Avenue), heralded in a press release as "the world's first specialty shop of Martha Stewart," was held in November. And Dec. 1 marked the launch of Martha Stewart Martha, a bimonthly magazine in Japanese "full of Martha's essence of how-to ideas which help you lead your better life."

Stewart sells the concept of a stylish domesticity to the self-help seeking masses. The products are almost an afterthought. As Joan Didion wrote in the New Yorker, her success (like that of other celebrities who have created marketable brand-name products) is self-generating. The fact that Stewart, a part-time fashion model from New Jersey who honed her skills in an investment firm ("My seven years on Wall Street could not have been better!" she now exclaims) and then became a homemaker, has managed to create a multimedia empire built upon her name and face alone is more important than what she actually says or does. To American women, especially, harried by careers and procreative longings and suspicions about feminism, Stewart is a paradigmatic paradox: She's 60, she traffics in mom's work (kitchens and gardens), but she's a billionaire with five homes and an apartment in Manhattan.

Ultimately, Stewart is an icon of America's more abstract and conflicted twin towers: democracy and capitalism. Everyone created equal -- and everyone for themselves. But in Japan, democracy is largely nominal, a diplomatic cover for some rigidly hierarchical systems and assumptions. Little surprise that to some local fashion arbiters, European models seem better attuned to contemporary Japanese tastes. One editor at a mass-market Japanese women's magazine sours on Martha Stewart Omnimedia's chances for success in her native land. Citing the recent failure of a Japanese version of Good Housekeeping, she finds Stewart's über-Americana ill-timed. "Today's Japanese are more interested in Italian styles in furniture and design," she says. "There's an Italian boom, partly because the aesthetic sense and the use of space are similar. American homes are unrecognizable in Japan; Japanese women simply don't have the room to entertain guests."

But chef Nobu Matsuhisa, who has garnered worldwide attention for his European twists on Japanese elementals, believes his pal can crack the Japanese market via Disney-like fantasy. Matsuhisa met Stewart seven years ago at a book party and has since appeared on her TV show. In September of this year, they jointly promoted their Japanese enterprises at Tokyo's Tsukuji Fish Market, and Stewart says she was "very honored" to pen the introduction to Nobu's just-published cookbook.

"She has a lot of interest in Japanese history, culture and food. She's serious," he says. "I see people in Japan looking for more American ideas right now. Japanese culture is different, of course, but people are changing little by little every year. There are a lot of new buildings going up, new condominiums. People still have savings here, and the spacious American style is more attractive to them, even if they don't have the space."

Stewart didn't rise from Jersey-born model to corporate queen by misjudging public appeal. She spent her formative years at an investment firm, and her sense of the market is as finely calibrated as that of a pop star like Britney Spears. "We will offer a combination of products," she says, "some of which are tailored to the Japanese market but retain a strong resemblance to the original merchandise." In other words, she will attempt to incorporate the kind of transcultural adaptations that have worked so well for American stalwarts like McDonald's and Starbucks. "Bedsheets need to fit futon sizes. If we change the product too much, the look and feel of the brand will be jeopardized."

Japan's zeal for consumption and its lust for designer-label pretensions are notorious worldwide. A quick survey of subways and sidewalks makes this unequivocally clear: Louis Vuitton and Prada never had it so good. But Stewart's products twist the equation in a decidedly late 20th century American direction. Like Starbucks, she sells low-end products at midlevel prices, with the veneer of a high-end reputation. Stewart's household items are sold through Kmart, one of the least glamorous of America's discount chains. In Japan, she has partnered with Seiyu, a better-organized, cleaner and more respectable version of a low-end retailer.

"Our basic everyday products are affordable household necessities, so they're somewhat immune to downturns," Stewart says. "The kinds of products we are offering combine the high quality associated with Martha Stewart [the label] and the pricing at Kmart and Seiyu."

Stewart's interest in Japan was born in 1977, when she visited her ex-husband Andy Stewart's publishing company in Tokyo. She visits Japan about twice a year now, according to LaLa's Okue, to push her products, meet and greet LaLa viewers and take in the sites.

When I ask her about the aggressive American nature of her products, Stewart takes great pains to ensure that her designs on Japanese consumers are not ignorant -- that she is not participating in an American commercial or cultural invasion.

"The Japanese sensibility toward art and design, cuisine and gardening and living will not dissipate," she argues. "In fact, the influence of Japan on other cultures has been extraordinarily powerful, and continues to be so." Indeed, she appeared earlier this month at New York's Japan Society for a lecture on Japanese aesthetics. She sold out the hall with a presentation on what makes Japan truly Japan, even if Japan itself doesn't quite know what that means anymore. And who's to complain? Isn't that what she's been doing for America?

"Her products are very inexpensive -- but they don't look inexpensive," Okue says, comparing Stewart's potential retail appeal with that of a chain called Uniqlo. Uniqlo is a wildly successful China-based clothing company that markets shapeless American casual styles to suddenly yen-conscious Japanese, managing to undersell even the Gap with its factory-stitched image.

"Japanese consumers really care about value now," Okue adds, "and Martha's ideas are really simple: If you wake up five minutes earlier, you can do more with your breakfast. That kind of thing is really appealing."