It has a Philip K. Dick story and hip references to "Blade Runner," but this sci-fi actioner is a soulless cyborg. 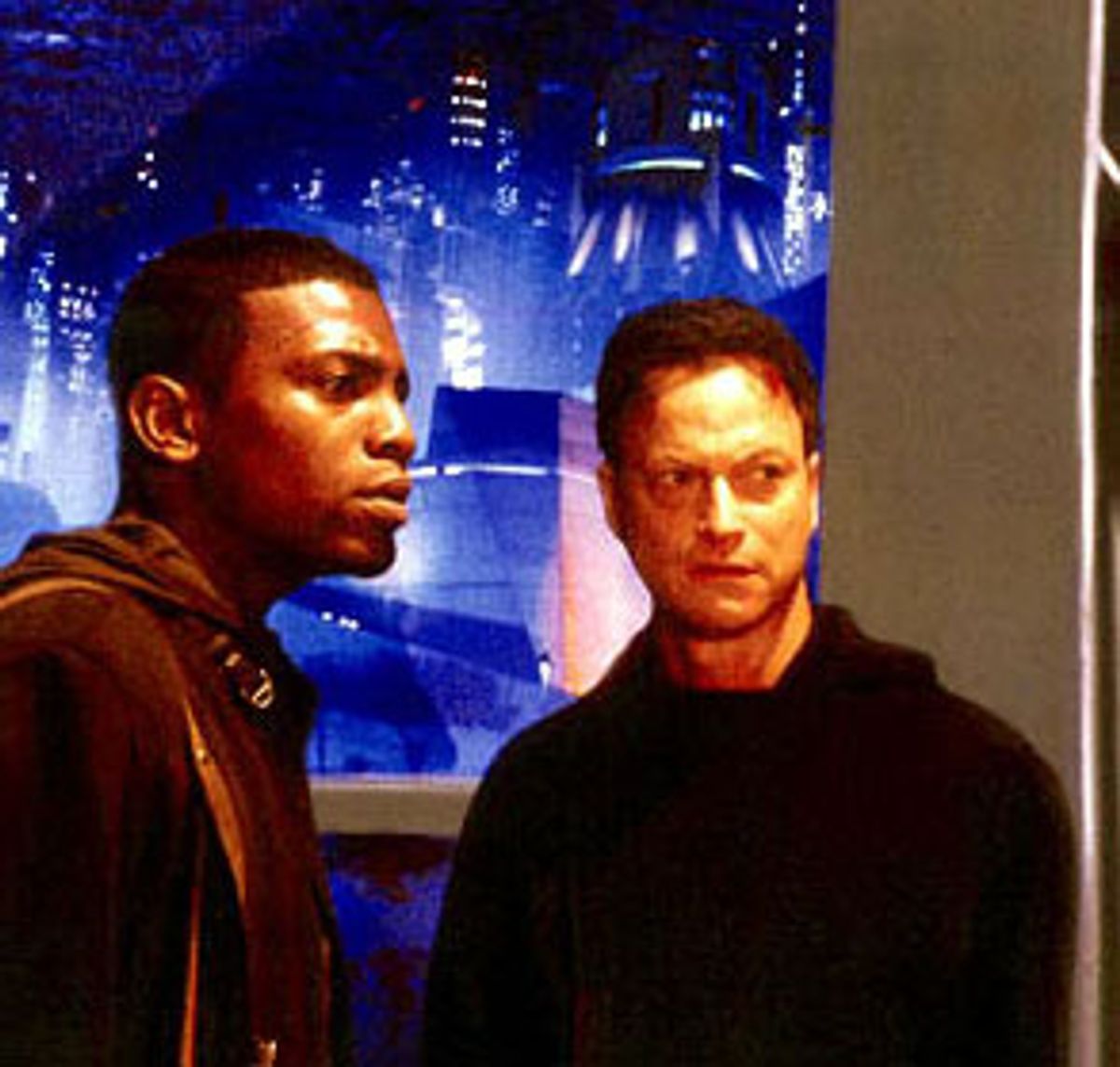 Is "Impostor" really what it purports to be? Is it just an innocent action-adventure movie of the early 21st century, or is it something more sinister? It might, for example, be a self-generating cyborg spore that was planted in pop culture sometime around 1987 and is only now germinating, a laboratory hybrid of DNA fragments scraped off the edges of "Blade Runner," "Total Recall" and other less salubrious sources.

What "Impostor" really is, of course, is a leftover, a time traveler far from home, an orphaned work of dystopian science fiction in this season of epic fantasy. Like all orphans it deserves our pity and sympathy, but unless you're the kind of hardcore sci-fi fan who sees everything ("Wing Commander?" "Titan AE?" "The 6th Day?"), I'm not sure this orphan deserves your eight or nine bucks.

Yeah, it's got a fine cast fighting impossible odds, some flashy camera work from Gary Fleder (director of "Kiss the Girls" and "Things to Do in Denver When You're Dead") and some uncomfortable parallels between its imagined future and our current American present. Yeah, it's based on a minor short story by the maestro of paranoid sci-fi himself, Philip K. Dick. But all this is filtered through no fewer than four screenwriters, with predictable results: Everything about "Impostor," from its decrepit postmodern Los Angeles settings to its am-I-live-or-am-I-Memorex plot, is both familiar and profoundly unoriginal. It's a lot like that dream you had after having your friends over for another showing of "The Running Man," accompanied by too much pizza and Rolling Rock.

Fleder seems to be one of those youngish Hollywood directors with a sophisticated sense of color and a fluid compositional style who doesn't especially care whether his films are about anything. "Impostor" gets off to an impressive start with its home-movie-style introduction of Spence Olham (Gary Sinise), who loses his father to Earth's worsening mid-21st-century war against the advanced race of Alpha Centauri 1 and becomes a weapons designer to avenge Dad's death.

Clad in a Nehru jacket out of 1967 by way of "Babylon 5," Spence has a sexy doctor wife (Madeleine Stowe), a best pal (Tony Shalhoub) and a secret bomb project that may turn the tide against the Centauri hordes bent on conquering Earth. (We never get to see these hostile aliens, which is probably defensible in plot terms but feels like something of a cop-out.) The permanent state of war has created a fascistic society faintly reminiscent of "Starship Troopers" or "Total Recall" -- or, for that matter, the society envisioned by John Ashcroft -- but without the wit of either. Billboards proclaim "Victory at Any Cost" and "There Is No Alternative"; antiwar protests are ruthlessly crushed.

That's when a sneering, pouting, endlessly cynical government agent named Hathaway (Vincent D'Onofrio, who steals every scene he's in) shows up to inject Spence with wacky seizure-inducing drugs and drag him off to an underground torture chamber. "Strap him in the vivisect!" Hathaway cries, his goatee vibrating with sadistic glee. The real Spence, Hathaway explains, is dead, and the current Spence is actually a Centauri cyborg, a flesh-covered bomb sent to assassinate Earth leaders. No, no, Spence protests, he's a real person with real memories, because, well, he just knows he is, that's all. Breaking free from his captors with ludicrous ease, Spence heads into the network of tunnels that leads, conveniently enough, out of the city and into the zone where -- as in every futuristic film -- the freaks with strange haircuts and tattoos live.

Spence's wife still believes in him, except when she starts to wonder about all those weird lights they saw in the sky that weekend they went camping. Um, that weekend they went camping at the precise spot where, as news broadcasts ostentatiously remind us, an unexplained fire has been burning out of control. Subtlety is not on this film's list of virtues, and the supposed mystery about whether Spence is a man or a monster, along with all the accompanying hoo-ha about what it means to be human anyway, is so poorly handled that it drains the plot of any suspense.

Sinise, ordinarily an actor of delicacy and tremendous range, may have gotten too close to this project (he is one of the film's producers). Spence is a performance of bug-eyed overacting, simultaneously a tortured hero and something of a dumbass. Sinise isn't nearly as enjoyable as the diva-esque D 'Onofrio, nor is he as restrained as the graceful Stowe or the guarded Mekhi Phifer, who plays a "zoner," or renegade outsider, who helps Spence sneak back into the city in an effort to clear his name. As is customary in this kind of film, by the three-quarter mark the last idea has fled and we're left with chase scenes, ass-kicking scenes (at which Phifer excels) and displays of imaginary gizmos.

OK, there are some nice bits here and there in "Impostor," for connoisseurs of these things. Elizabeth Peña has a good scene as the zoner medic ministering to society's outcasts, and Lindsay Crouse makes a brief appearance as the dour dictator targeted by the enemy. But there's nothing distinctive about this film's vision of the year 2079; it's a consensus future, drawn from a dozen or more familiar sources, that feels a little out of date.

On one hand, Dick's obsession with the fragility of human identity has been so thoroughly worked over by the movies that it's past time for sci-fi practitioners to move on to something else. On the other, recent breakthrough films such as "The Matrix" and "Donnie Darko," although not actually Dick adaptations, have borrowed elements of his deranged worldview for their own purposes. The problem with "Impostor" isn't its source material but its utter absence of inspiration, and in that sense it really is a cyborg: It looks like the real thing but has no soul.