Our own terror cells

If the Bush administration treated homegrown terrorists like their overseas comrades, its dragnet could ensnare the far political right -- and John Ashcroft. 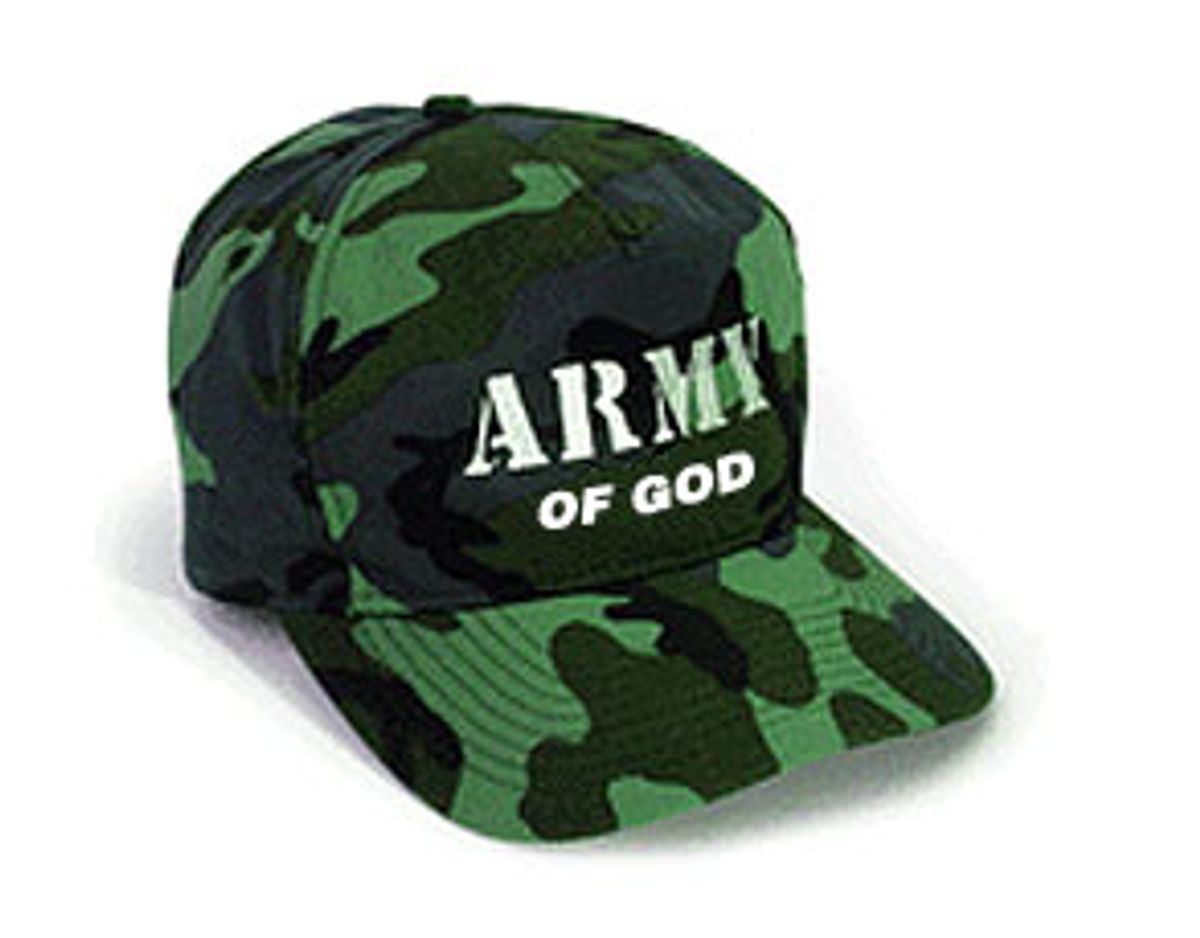 Self-described anti-abortion "terrorist" Clayton Waagner, arrested last month by the FBI, might remain a footnote in the White House's war on terror. But should the Department of Justice decide to treat Waagner -- the man who has admitted to sending hundreds of anthrax threats to clinics and abortion rights organizations in October and November -- as more than just a lone nut case, and rather as part of a domestic terrorist network, that could all change quickly.

And if the Justice Department decides to pursue this network with the same zeal with which it has pursued foreign terrorist networks in this country, it could expose a network that spreads broadly from the far-right fringe to right-wing politics. Even, indirectly, to the attorney general himself.

Waagner signed his anthrax hoax letters "Army of God" -- after the violent anti-abortion group he affiliates with. An Army of God adjunct called Prisoners of Christ, meanwhile, gets part of its cash flow from an Oklahoma City company called AmeriVision, which fashions itself as a Christian right version of the liberal Working Assets long-distance phone service. AmeriVision -- using the brand name "LifeLine" -- "provides 10 percent of our long distance revenues to thousands of organizations that support family values -- all part of our Christian commitment of helping others," according to its Web site. LifeLine's client list reads like a who's who of the Christian right: American Family Association, Concerned Women for America, Christian Broadcasting Network, the Christian Coalition, Gun Owners of America and the National Right to Life Committee. For several years LifeLine also partnered with the militant anti-abortion group Operation Rescue.

AmeriVision says it has donated over $50 million to its "partners" in the 10 years of its existence. One of those partners is Prisoners of Christ -- whose address is a private postal box four blocks from the White House. This reporter called LifeLine in December as a prospective customer and was told that LifeLine had cut checks averaging between $40 and $50 a month to Prisoners of Christ since May of 1996, and that the money flows to a Washington D.C. public relations group called Christian Communication Network headed by Gary McCullough -- the longtime principal of Prisoners of Christ. (McCullough's group maintains a web link to the Prisoners of Christ site.) When Salon called McCullough for comment about the LifeLine connection, he said, "We are a small potato in that pie and I prefer not to comment," then hung up. When Salon contacted LifeLine again for an official response, we were told that under the privacy rules set forth by the Federal Communications Commission, they "cannot give out customer or donor information."

Meanwhile, during the time of his announcement for president, then-Sen. John Ashcroft was the Christian right's favorite contender. To help finance his campaign, Ashcroft made a pilgrimage to Oklahoma City, where he addressed a group of AmeriVision executives at the Oklahoma City Marriott Hotel on Nov. 11, 1997, according to an account in the St. Louis Post Dispatch. Campaign finance reports reveal that top AmeriVision executives kicked at least $26,500 into Ashcroft's Spirit of America PAC within days of the candidate's personal pitch for funds. Contributors included company founders Tracy Freeny and Carl Thompson, who each contributed $5,000 to Ashcroft's Spirit of America PAC. Major stockholder and soon to be board member Jay Sekulow and his wife, Pamela, also contributed $5,000 each; five executives of AmeriVision's VisionQuest and Hebron marketing divisions contributed a total of $5,000; and investor and later director John Damoose added $500.

In 2000, AmeriVision board member Jay Sekulow and Pamela Sekulow contributed the legal maximum of $2,000 each to Ashcroft's unsuccessful reelection campaign to the U.S. Senate.

Should President Bush's imposition of "terrorist sanctions" be applied to companies with ties to domestic terrorists -- as with the 62 individuals and businesses whose assets were frozen because of their alleged ties to foreign terrorists -- it is conceivable that not only Army of God but, through its connections, AmeriVision could be a target as well. And Ashcroft would find himself in the awkward position of trying to investigate one of his own campaign contributors.

Embarrassment caused by financial contributors is not a new problem for politicians, of course. "If you strip away the hot button issues of abortion and terrorism," says Larry Noble, executive director of the Center for Responsive Politics, "what you have is a classic case of a business having made campaign contributions. And now the administration has to make a decision that may financially impact that business. People will logically ask, what connection is there between the campaign contribution and the decision?"

But contributions from groups with ties to any form of terrorism, of course, are a whole different story. And foes of Army of God -- and Ashcroft, who has largely given a cold shoulder to abortion rights groups since taking office -- are more than eager to promote Waagner and the group as serious domestic threats.

"This is the first time that these anthrax threat letters have been classified as domestic terrorism," says Vicki Saporta, executive director of the National Abortion Federation, whose members had received over 80 anthrax threats by mail prior to Waagner's crime spree. "I think there has been a very big change in the way these crimes are being viewed."

"But," she says, "until we start looking at these individuals as part of a network that thinks it appropriate to murder people to accomplish their political objectives, we are doomed to looking at individual crimes after they are already committed."

Working Assets, meanwhile, has mounted its own letter-writing campaign to get the Justice Department to designate the Army of God as a terrorist group. "By even cautious standards," writes Working Assets president Michael Kieschnick, "the Army of God is clearly a terrorist organization and should be treated as such by the Department of Justice. Where possible, this should carry the following legal consequences, similar to those imposed on foreign terrorist organizations." Working Assets, which also incorporates social and political views as part of its marketing efforts, has given grants to Planned Parenthood Federation of America among other reproductive rights, environmental and social justice organizations.

Kieschnick points out that if his campaign succeeds, it would mean that it would be specifically against the law to fund or materially support the Army of God (and, by connection, Prisoners of Christ), just as it would any other terrorist group. Banks and other financial institutions would be obliged to block funds designated for the Army of God and report their actions to the Department of the Treasury.

But many of these groups receive their money directly, and not just through the conservative Christian phone service. Visitors to the Prisoners of Christ Web site are urged to sign up with LifeLine. "Help the prisoners with every call," supporters are urged, "10 cents a minute, 30 minutes free, plus 10% back to this ministry." All you do is "Call 1-800-607-5155 and tell them you want 30 free minutes and 10% of your long distance bill to go to" Prisoners of Christ. An announcement next to the ad for LifeLine also urges that checks "for general prisoner needs" should be sent to the White Rose Fund, care of one of the leading institutions in the Army of God network: Reformation Lutheran Church in Bowie, Md.

This church, headed by convicted clinic bomber Rev. Michael Bray, is best known for playing host to a Prisoners of Christ fund-raiser -- the annual White Rose Banquet -- a name misappropriated from a short-lived World War II-era anti-Nazi resistance group. Convicted anti-abortion felons and their most vocal supporters publicly gather every year on the anniversary of Roe vs. Wade to celebrate their victories and raise funds for their imprisoned martyrs. This year's event has been announced on the Army of God Web site. Typically about 100 veterans of militant and violent anti-abortion activism gather to network, to raise funds, and to taunt the abortion rights groups and law enforcement agencies that monitor the event closely. Bray, for example, described the attendees at the 1997 banquet as an "august cadre of conspirators."

Last year's banquet featured a blatant appeal from convicted arsonist Dennis Malvesi. He thanked those who helped him -- without naming names -- and called on others to assist those "on the lam, from the lock gluer to the bomber [to] arsonists and snipers."

Apparently Malvesi wasn't asking anyone to do anything he wouldn't do himself. According to a federal indictment, he had been secretly assisting accused assassin James Kopp, who was on the lam in Europe at the time. But the feds were already onto Malvesi.

While Malvesi was in Bowie, Md., bucking up the White Rose banqueteers, the FBI was searching Malvesi's apartment in Brooklyn. They eventually captured Kopp by tracking Malvesi's efforts to wire him money in France. Malvesi and his associate Laura Marra are now in jail without bond, charged with aiding and abetting Kopp's flight from justice.

The funds raised at the White Rose Banquet are ostensibly for the Prisoners of Christ, which also provides financial support to the most notorious anti-abortion criminals and criminal suspects currently behind bars: Paul Hill, on Florida's death row for the murder of a doctor and his escort; Michael Griffin, serving a life sentence for murdering a doctor; Shelly Shannon, convicted of the attempted murder of a doctor and series of arsons across the western United States; and James Kopp, indicted for the murder of a doctor and awaiting extradition from France. Kopp has also been charged in Canada for a series of sniper attacks on physicians. Malvesi and Laura Marra are being held without bond in New York on charges of aiding Kopp in his international flight from justice.

The highlight of each year's banquet is an auction featuring relics of terrorist acts and handicrafts by convicted felons. The announcement for the 2002 banquet, for example, reminds prospective attendees:


Items donated by prisoners in the past have included: handicrafts, pencil sketches, including calligraphy of the Ten Commandments, by Paul Hill; artwork from Shelley Shannon; the black leather jacket worn by James Mitchell as he burned a baby killing center in Northern Virginia; denim jacket Joshua Graff wore while performing his acts of kindness towards the unborn; and the watch used by Dennis Malvesi to time his incendiary device to blow up Planned Parenthood in NYC.

Perhaps the most remarkable aspect of the banquet is that it is visible proof that there exists more than just a loose association of individuals or small groups utilizing the name of Army of God. "Nothing secret about that meeting anymore," observes Tracy Sefl, a sociologist at the University of Illinois who has studied the nexus of these groups. It's so obvious, she says, that the White Rose Banquet might as well be called the "annual above-ground meeting of the Army of God."

But it is long past time that the Army of God should be viewed as more than a confederacy of lone nuts, according to Sefl. She sees the Army of God and its constituent parts as displaying considerable "rationality and organization" -- particularly in the staging of the White Rose Banquet.

"If an organization exists to create order, to plan, to articulate a message," she says, "these are all things that we see in the Army of God." Other characteristics of organization evident in the Army of God are such things as "commonality of language, shared tools, identifiable leadership, and fund-raising," she observes. "The hook? Prisoners of Christ."

The Army of God has evolved, she believes. "As the political climate has changed around clinics, so has the Army of God. It's a classic case of organizational behavior," she says. "It adapts to its environment."