"Dot.con: The Greatest Story Ever Sold" is the first good book about one of capitalism's most embarrassing debacles. 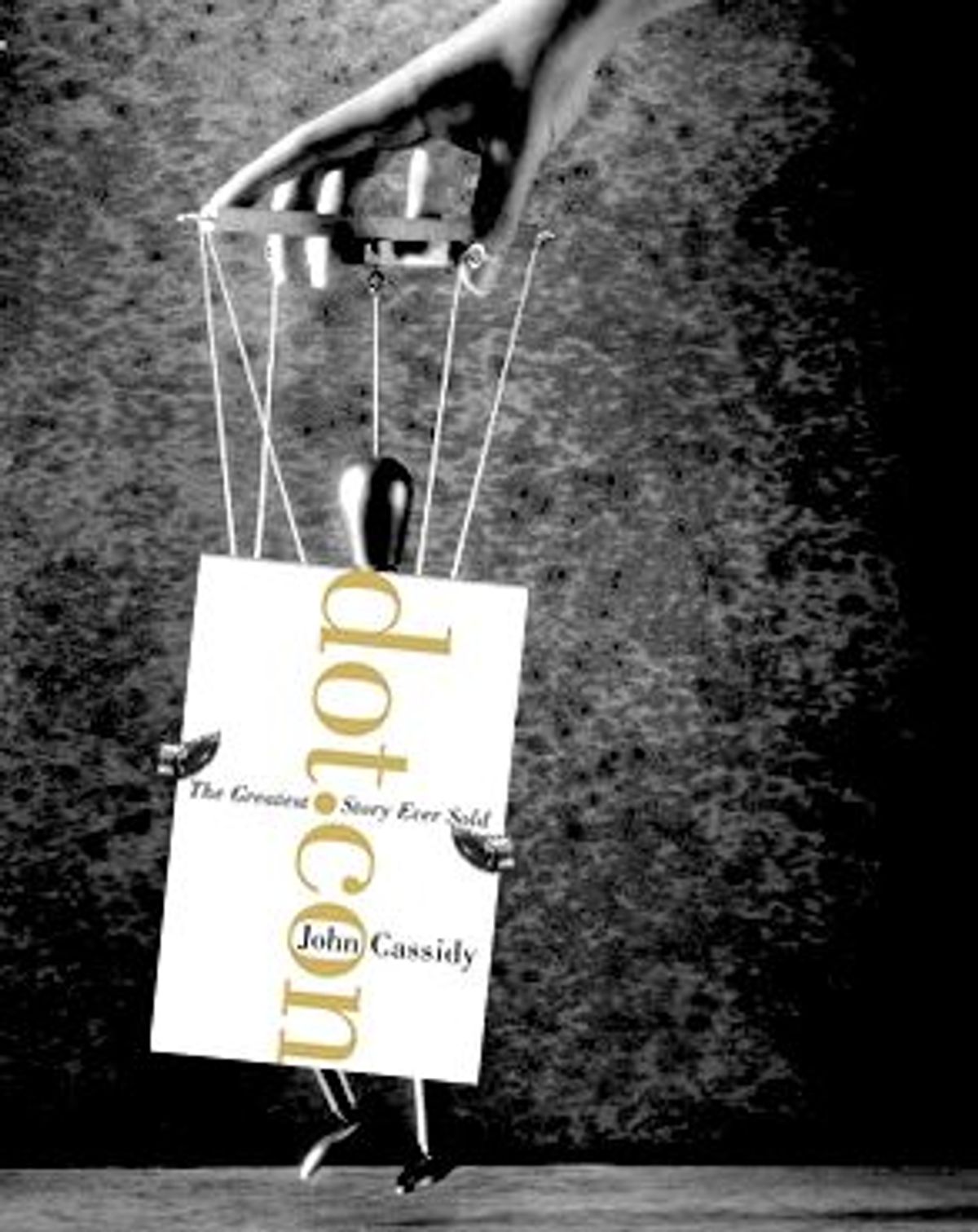 The latest crop of diarists of that great and distant epoch, the Digital Age, have yet to score a hit, and frankly, this has come as a relief. We're at war, after all, and "Whatever happened to those Baby Moguls?" has been a less-than-pressing concern. Recently, however, feeling guilty of too short an attention span, I took a couple of memoirs -- J. David Kuo's "dot.bomb" and Stephan Paternot's "A Very Public Offering" -- out for a spin. And while I don't recommend you do the same, I was surprised to find the books left me hungry for more on the subject. They raise anew questions that, even now, have to count among the most important of our time, and might help us comprehend how fanciful -- and hateful -- notions catch on.

Such as? Such as how, exactly, America's best and brightest came to prize disastrous start-ups over entire, established industries? More to the point: Were stratospheric dot-coms like Paternot's TheGlobe.com accidental beneficiaries of a mass delusion, or, as Tom Frank argues in "One Market Under God," cynical, high-tech scams? (And you have to admit, the Internet boom as heist movie holds a certain appeal. "Ocean's 11" set not in Vegas, but on Sand Hill Road. George Clooney in the Jim Clark role? Brad Pitt as John Doerr? Matt Damon as Marc Andreessen? Julia Roberts as Mary Meeker? At the very least, it would give the guileless Paternots of the world a dash of retroactive panache).

To get at the answers, we can now thankfully turn to John Cassidy's "Dot.Con: The Greatest Story Ever Sold" -- serialized this week in The New Yorker. In contrast to Kuo's dull insider, or Michael Wolff's wise-ass insider (his 1998 book "Burn Rate" is still the one to beat in the "what I saw of the Internet revolution" category), Cassidy did not live the Web dream, nor assume a fake job, but had season tickets to the show as a financial reporter. If newspapers are the first draft of history, and film documentaries like "Startup.com" comprise a second, Cassidy has given us a polished third draft, a popular history of the digital bubble, as the dust jacket says, "in the tradition of John Kenneth Galbraith's 'The Great Crash.'"

Though the title recalls the author's stint as deputy editor of the New York Post, those unfamiliar with Cassidy's work at the New Yorker, where he is a staff writer, should be aware that he was formerly at the Economist. His strengths are what I consider the best of that magazine. He's a great synthesizer of facts and figures, a facile stylist and a droll humorist.

Right in those moments when Tom Wolfe could be counted on to have a punctuation seizure, Cassidy opts instead for stinging understatement. Critical of Amazon.com's founder, Jeff Bezos, for suggesting his firm had stopped bleeding cash in February 2000, Cassidy notes, "For all Bezos' protestations to the contrary, the numbers showed that his company was still subject to what might be called Amazon's Law: the more money it took in, the more money it lost."

Of Bezos' fame, he notes, "Newspaper and magazine editors were desperate to put a human face on the Internet story, and writing about Bezos was an obvious way to do it. With baby features and an infectious cackle, he could all too easily be portrayed as the goofy boy next door. Most of them focused on his discovery of the World Wide Web, his fateful drive cross-country, and the origins of Amazon.com in a Bellevue garage. Few mentioned that he was ordered to research Internet e-commerce, that he flew from New York to Texas, and that he rented a house with a garage precisely so he could later say that Amazon.com started out in one."

Despite the title, Cassidy does not argue that the flowering and wilting of dot-coms represents a vast conspiracy -- right-wing or otherwise -- but more a confluence of several vectors that went unchecked by those who knew better. These include the Internet's becoming mainstream (and being widely used to trade stocks); an ever-widening inner circle of business executives who believed their own bullshit; a pop culture obsessed with young "rebels"; a libertarian-savant central banker; and, most of all, "a massive restructuring of American capitalism" brought on by that humble innovation, the mutual fund.

You may beg to differ with Cassidy's assertion that "the stock market's sustained ascent was the central and dominant fact of American history in the 1980s and 1990s" -- what about Michael? Madonna? Britney? -- but it's hard to argue with this: "In 1983, the wealthiest one percent of American households owned 90 percent of all stocks. The vast majority of households -- about three out of four -- owned no stocks at all. Most of these families, if they had any surplus income, kept it in the bank. Fifteen years later in 1998 ... almost half of all American households owned stocks, either through individual shareholdings or through mutual funds."

Cassidy is persuasive that 401Ks and IRAs had as much a role in setting the stage for the digital bubble as the Netscape browser. During 1996-97 alone, Americans poured $170 billion into stock funds. "It's no accident that the bull market and the development of the mutual fund industry coincided," he writes. "Rising stock prices drew more money into mutual funds, and mutual funds poured money into the stock market." Of course, this seemingly virtuous cycle can work in reverse -- and later did.

At the same time, to suss out how so many developed so extravagant a crush on the Internet, Cassidy traces the origins of the network of networks to visionary engineers who transformed a failsafe, military technology into something of broader social value. As much as anyone, these pioneers were astonished by how rapidly the Internet grew, and that model of exponential growth was fixed in minds as a PowerPoint slide with a "hockey stick"-shaped curve on a graph, with the clear implication being that revenues would follow a similar, upward trajectory.

From there, Cassidy covers what was a sort of dress rehearsal for the bubble -- the hype about the "information superhighway" and "interactive TV," circa 1993-95. He then proceeds to tell how the Internet eclipsed ITV and, thanks to the phenomenal IPO of Netscape, in August 1995, caught the attention of Wall Street -- in particular, a handful of investment bankers and analysts such as Frank Quattrone, Henry Blodget and Mary Meeker. These three -- Meeker, above all, with her February 1996 Internet Report -- convinced their peers that there was much more cash to be made on dot-coms. With Meeker in mind, Cassidy writes, "On Wall Street, financial success corrupts, and absolute financial success corrupts absolutely. The corruption is not necessarily venal: it affects people's judgment rather than their probity."

Once it became possible to float a profitless company on the NASDAQ and, with the proceeds, buy your way to respectability (as AOL did most spectacularly in its purchase of Time Warner), you might feel like a loser for not trying yourself. This dread of being left out, the rise of online trading -- especially day trading -- and "The Greater Fool theory of investment," Cassidy contends, became the essential drivers of dot-com mania. (The "greater fool" theory of investments holds that what matters is not the earnings, or performance, of the company you hold stock in, but simply that you can resell its stock to a sucker for a more ridiculous markup than you paid).

As for signs that the end was near, Cassidy ferrets these out with aplomb. He's on to That Darned Barron's Piece, of course, the one by Jack Willoughby on March 18, 2000 that indicated that more than 200 dot-coms would go broke by year's end. But he also points to the Fed's interest-rate hikes early in 2000; founders selling off stock in their own companies; and indicators only an economist might notice: the level of margin debt at brokerages reaching a 60-year high, and household debt rivaling that seen in Japan's credit-driven bubble of the 1980s.

For as credible and sweeping a history as Cassidy manages, however, I finished "Dot.con" with some misgivings, and they all come down to this: He didn't get enough California in his book. While he nails how Alan Greenspan's supervision of the Fed paced, if not fueled, the boom, and explores the intellectual influences on the Fed chairman (Ayn Rand, most prominently), Cassidy never fully understands the hackers and bankers in the 415 and 650 area codes whose ideas and desires the era also reflected. For example, he understandably chides Kevin Kelly, author of "New Rules for a New Economy," for predicting "ultra-prosperity" in Wired on the eve of dot-com destruction, but makes no attempt, as he did with Greenspan, to understand where Kelly was coming from.

Had Cassidy spent as much time in San Francisco's South Park as he did at Manhattan's 50 Broad Street, he'd have been able to give a more complete sketch of the enthusiasm for the Net that was, in many ways, betrayed by its commercial exploitation. He'd have heard from those who took juvenile delight in watching as huge corporations wasted millions on new media pipe dreams. And he'd have reckoned further with those who, well before the lure of fast money, Foosball at the office and the fear of missing out, were drunk on the sense that no one on Earth was better prepared to do what they were doing just then, for the simple reason than no one had ever built a World Wide Web before.

Brad Wieners is a former Wired senior editor. He left Wired in December 1999 to work at Outside. He lives in New York.