This film about old people, genius, love and light just might be a masterpiece. 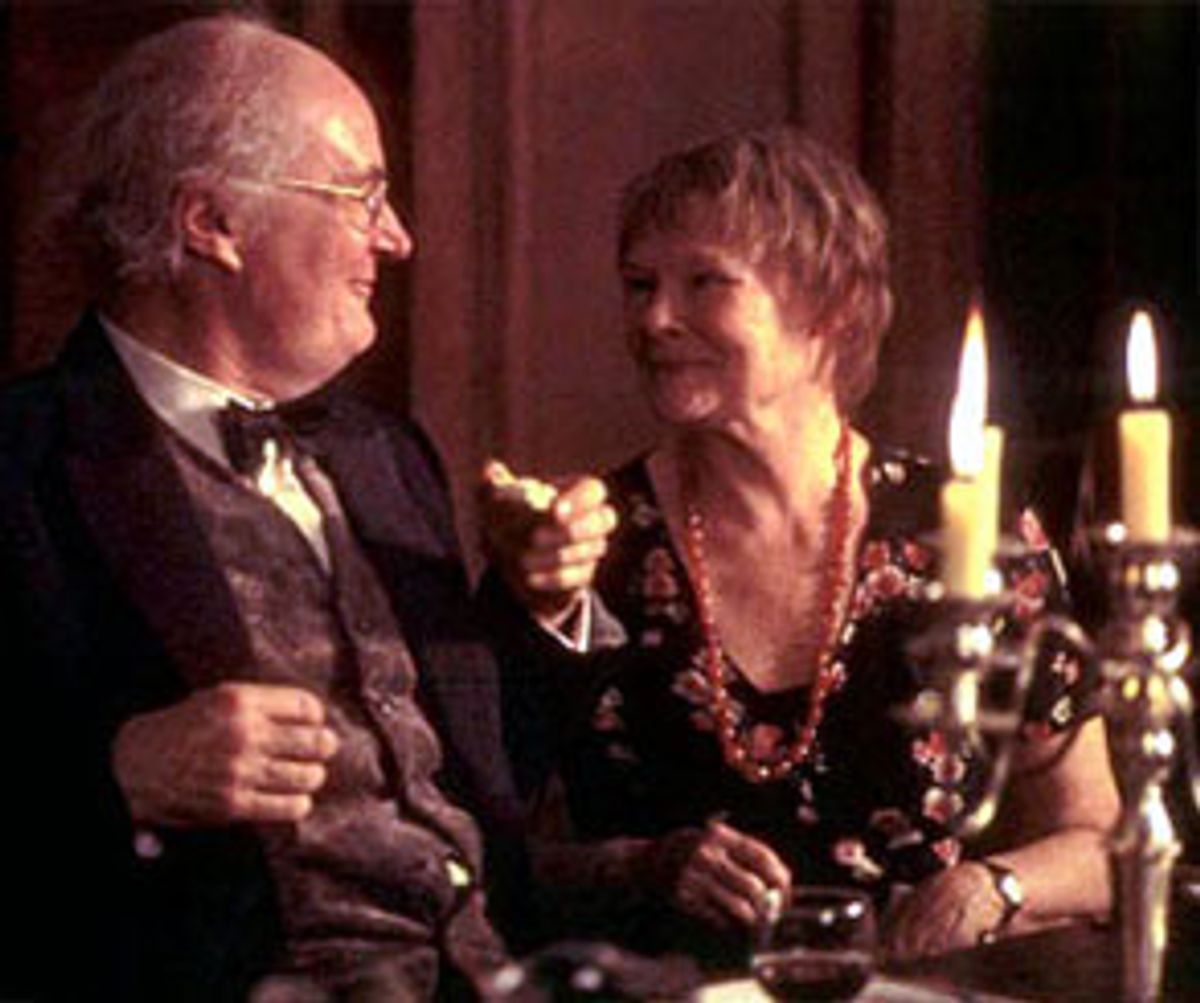 The first time I saw Ronald Eyre's film "Iris," I was impressed and touched -- rather as if I were watching a program in some English masters series, on the fond love between Murdoch and her husband, John Bayley, and on how her being overtaken by Alzheimer's disease left them more childlike than ever. With Judi Dench as the older Iris, Kate Winslet as her younger self and Jim Broadbent as the older Bayley, how could one not feel a deep respect for the project and its credentials?

But I thought at the time that it had some failings, or areas of omission: For a start, the film left one with no idea what Murdoch's novels are like -- their rhapsodic, literary feeling for passion and outrage -- and it didn't adequately convey her earlier sexual life, or her affairs with such overwhelming figures as the writer Elias Canetti. The way it moved back and forth in time was pretty and elegant, but was it strictly necessary? Was there really a compelling arc of story? Or were the elements of the film laid out, and then creatively rearranged, for formal effect?

Well, a strange thing happened: I saw the film in San Francisco in mid-December; and then at the end of the year I took my family for a few days to England -- to London and to Oxford, where Murdoch and Bayley lived as she fell ill. And I think that being there, in winter, amid the meadows and the Cotswold stone buildings, and seeing people held in a life of the mind somewhat at the expense of untidy reality, let me realize how much the light in "Iris" had been weighing on me, no matter how clear an argument I had worked out in my head about the film's limitations.

The movie has been very deliberately done in a milky white light. There is a central dreamlike sequence in which the young Iris (a bounteous, naked Winslet) is swimming underwater (presumably in the Thames at Oxford), and in which she encounters her senior self (Dame Judi in a 1930s black bathing suit). In my time, I have swum in that Thames, and it was a browny-green color. In other words, Eyre has made his water viscous and white for a reason, and kept it so. In part that is because he sees his whole film in a kind of sunless wintry radiance, a level of light that makes skin and faces look the way they do in certain great Dutch paintings -- by which I mean alive, fleshy, but cool, unsentimental, mortal and aging.

Never mind the simplicity of story here (for we know Iris Murdoch died, and therefore is dying, and we have to be stupid not to feel the loss of intellectual control in a writer), still the light is infinitely musical and emotional. And it is just the kind of light that allows for those famous English things -- phlegm, congestion, pneumonia -- as well as faces that stay young-looking, and skin tones that often have the shining grey (to use the English spelling) of fresh come.

There's my point: The pearly light of "Iris" is always brimming with sexuality, and with the notion that sexiness is akin to vitality, to staying alive and having the synapses in one's gray matter make the proper spark and leap. Looking at "Iris" is a little like swimming in brain tissue. Lest that sound grotesque, let me put it another way. This is a film about two old people, both brilliant to the point of genius, yet duffers and babies at running a house and doing the ordinary things that are called modern efficiency. So they need each other for company and understanding. And they both believe in the way words (like fish) can swim in the misty water of the head and find their way home -- like sexual urgings that vindicate belovedness.

Then these fish lose their way, and the water and the light seem like elements where one might drown.

And here's the great thing: This is a picture about old people, about people of great mind who barely function in the world. In your own lives, you may know old people and perhaps even intellectuals -- and you know how the movies are trying to suppress them. Well, here's one step in the other direction, and one more proof that Dame Judi Dench -- her face like a peony battered in the rain -- is one of the most sexually attuned actresses we have.

So I looked at the film again, home from England, and it's much more than I thought at first. Now, if I could see it in Oxford ... maybe it's a masterpiece. At the very least, I urge you to see it and trust its light.