The first U.S. ship to join Operation Enduring Freedom has a moose named Bully onboard. 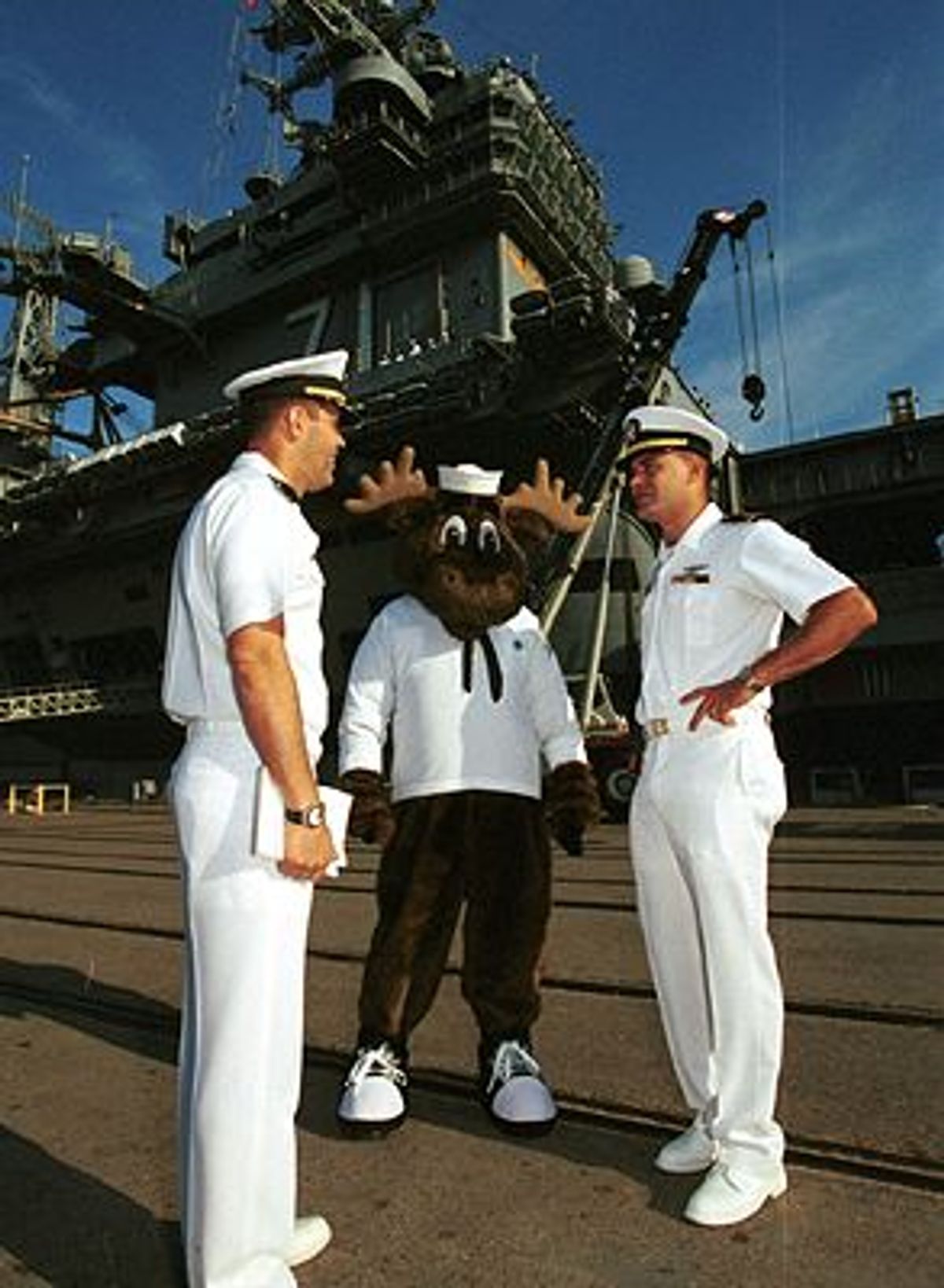 Four thousand, nine hundred and eighty-seven U.S. Navy personnel are on board the USS Theodore Roosevelt, presently anchored in the North Arabian Sea, including a 6-foot-tall moose with googly eyes, made of open cell foam covered in plush brown synthetic fun fur. He goes by Bully the Moose, although his given name is Sagamore, after Teddy Roosevelt's hometown.

"We're launching strikes against the Taliban every day," says Lt. Cmdr. Terry Chauncey from a satellite phone. "Every third or so day, I put on the moose suit to spread cheer and give everybody a laugh. That's important when you're being shipped around at sea for six months."

On Sept. 19, Chauncey packed up his volleyball net, a deep-sea fishing rod, his favorite karaoke discs and thousands of bingo markers and deployed for Norfolk, Va., home base for the USS Teddy. One of seven Nimitz-class aircraft carriers -- the largest warships in the world -- the USS-TR is 4.5 acres of portable American soil, with two nuclear reactors, four catapults that can send 70,000-pound aircraft from 0-150 mph in two seconds, over 80 fighter planes including Tomcat and Hornet jets and antisubmarine aircraft, and three Sea Sparrow missile launchers. The Teddy has a combat load displacement of 97,000 tons and houses living quarters for 5,500 people.

Bully the Moose is the latest strategic weapon of the Welfare, Morale and Recreation Department of the USS-TR, of which Terry Chauncey is the administration officer. The department wanted a big mascot for the warship and chose a moose -- Teddy Roosevelt was an avid hunter and often remarked, "I feel strong as a bull moose." Bully was born in August and within a month was assigned a top priority mission as the USS-TR's ambassador of goodwill in Operation Enduring Freedom.

Bully is fighting this war with hugs, laughter and goofballism. His is the universal language of emotive head bobbing and wild gestures, of fancy footwork of the giant fuzzy paw variety. He hosts a weekly bingo game, hogs the karaoke machine, cavorts around the ship deck, plays basketball and volleyball and waves when other ships pass by.

"The moose also likes to fish so we made up a special fishing rod for him," Chauncey says.

"The mascot suit comes with ice packs and a little fan in the head to keep you cool, but it still gets quite toasty in there. It'd be torture putting the suit on every day," says Chauncey, who's quite used to working in close quarters after 20 years in the Navy. "I have a couple of enlisted to help me out [wearing the moose suit] from time to time ... but the identity of Sagamore T. Moose is a closely guarded secret!" Most of the crew have no idea who's lurking under the fun fur.

Chauncey describes Bully as "a big fur outfit with a big head. Being a ship, the mascot couldn't be tall, so the horns had to be designed lower than normal." The horns were also specially modified to accommodate the small Dixie cup-shaped cap that Navy crew wear. "It was a perfect fit for the Santa hat he wore Christmas day, handing out presents from families and gifts from people around the world. We've had an outpouring of support and love. And more candy on board than they probably have in Hershey, Pa. I had dinner with the ship's dentist the other night and said, you're gonna be busy."

What does Bully like? "Bully likes to hug," says security clerk Merideth Mitchell, one of about 850 women crew on board. "You're not supposed to get much of that out here so he works for me. Some people haven't adapted well to a mascot on an aircraft carrier. They prefer real entertainers. But you don't always know who's in there and nobody would do anything to jeopardize him. He's too cuddly."

Mitchell also appreciates Bully's taste for theatrical costumes. "It's funny seeing a moose dressed up like a pirate, or in a toga hosting bingo. On Halloween he wore a big sheet. It was hilarious. As if you couldn't tell with those big antlers!" On Christmas morning he threw on an extra-large Santa jacket over his favorite lounge get-up of Hawaiian shirt and tight gold shorts.

"He likes to show leg" says Chauncey, "but he has pretty thick hairy legs and a big butt."

Hairy legs notwithstanding, Bully managed a busy social calendar over the holidays. "We had Jessica Simpson onboard. It was fantastic! She is a very personable young woman who brought lots of smiles to sailors' faces. It was a packed house. She brought her father who's her manager and Mr. Nick Leachy of 98 Degrees .... He made the female sailors' hearts go pitter patter. The entire visit provided a motivational boost to the crew."

Bully's morale has been stroked too. "Since we've been out here I've seen one other [military] mascot," Chauncey says. "USS Sacramento has a dancing bear as her mascot."

Bully and the bear have yet to schedule any furry face time together but have waved wildly at each other as their ships pass. "Bully also had an opportunity yesterday to perform with the Jacksonville Jaguar mascot, Jaxon D'Ville," Chauncey says. "What a character! The Jacksonville Jaguar cheerleaders were onboard bringing a piece of America with them. Before that we had the Miami Dolphin cheerleaders. Wow, what an action-packed few weeks."

Still, it's been almost four months since the USS-TR crew has been allowed to leave the ship. Privacy is in short supply for most crew members who share sleeping berths with 175 other personnel. Luckily the USS-TR is air-conditioned and has more than 3,000 TVs onboard.

"We get European channels mostly: lots and lots of cricket, which no one understands how to play," Chauncey says. "We're really hoping to be able to pick up the Super Bowl in February." There are also 2,500 phones and enough electronic equipment onboard to run 50 broadcast stations simultaneously.

The ship's captain, Rich O'Hanlon, hosts a weekly talk show and plays a "Greatest Hits" video of the best in the week's bombing. Bully the Moose makes the odd guest appearances on the show, tousling the captain's hair, lightening up the atmosphere and inviting crew to upcoming social events.

"The captain is very supportive of Sagamore and his part in the morale program," says Lt. John Oliveira, aka "Spin" and spokesperson for the T.R. Battle Group. "We have a real stuffed moose head in our hangar bay, a donation from the Roosevelt Foundation. We always kid Sagamore: 'Saw your mom earlier. You could be next.' But it's all in good fun. I'm smiling right now just thinking about that big moose."

The USS-TR crew have had only three days of R&R -- three full days not running air flights -- in more than a hundred days at sea. These are Bully's busiest days, hosting what's called a "steel beach picnic" barbecue on the flight deck. Bully organizes tricycle races, volleyball and golfing.

"We lob golf balls into the ocean. Big water traps, though," Chauncey says. They also stop the engines and lower the aircraft elevators so that crew can go swimming and "let their hair down. The water's about 82 degrees and the weather's in the high 80s so it's refreshing."

Bully doesn't know how to swim so he takes this opportunity to lounge seaside with his rod, deep-sea fishing and basking in the spotlight. "Bully likes to be the center of attention," says Chauncey. "It's pretty demanding and sometimes it's too much for my 41-year-old body."

Indeed, the moose costume hung in a closet for New Year's, getting some much-needed rest. "Christmas and New Year's were regular work days for us," says Chauncey, who hopes to one day be a pilot. "Unfortunately, the Taliban and al-Qaida don't take days off, and we need to keep the press on."

Some of the crew were able to attend the New Year's bash onboard (alcohol free, of course -- no booze is allowed on U.S. Navy ships). Festivities started off with a talent contest and then a hat contest. "The crew decorated paper hats," Chauncey says. "We had a pie-eating contest so there's whipped cream all over the hangar bay. Man Overboard, our ship's band, hit the stage at 10 p.m. and they just finished up about half an hour ago." For the midnight countdown, the airframe shop built a big ball with strobing disco lights inside. "The captain counted down. It was a piece of New York in the middle of nowhere. We had a great time."

Another prized piece of New York onboard is the American flag that firefighters hoisted at ground zero. The flag was shipped to the USS-TR in November to commemorate its role as the first U.S. ship to join the war. "We fly it when we do our air strikes. Our biggest wish is to stop in New York City on the way home and bring the flag back to the citizens of NYC. We have our fingers crossed."

It's now 1:38 a.m. in the North Arabian Sea and Chauncey's been putting off his New Year's call to his wife and 11-year-old son in Mulberry, Fla. After that he'll be catching a few hours' sleep and bringing the moose suit out of the closet tomorrow. "Bully has a big challenge. Art Gilmore and Spud Webb, two sports legends, are coming onboard to play some games."

Asked about New Year's resolutions, Chauncey pauses. "Be the best father that I can be." The man behind the moose then offers a final message to everyone back in the States, on behalf of the USS-TR crew. "We love you. Thank you for your support and continue to love each other."

Danielle Egan is a freelancer in Vancouver, Canada, and advocate of the ethical treatment of mascots.