For the Earth Monkey and the Water Rat the good news is compatibility and powerful attraction. The bad news? Booby traps! 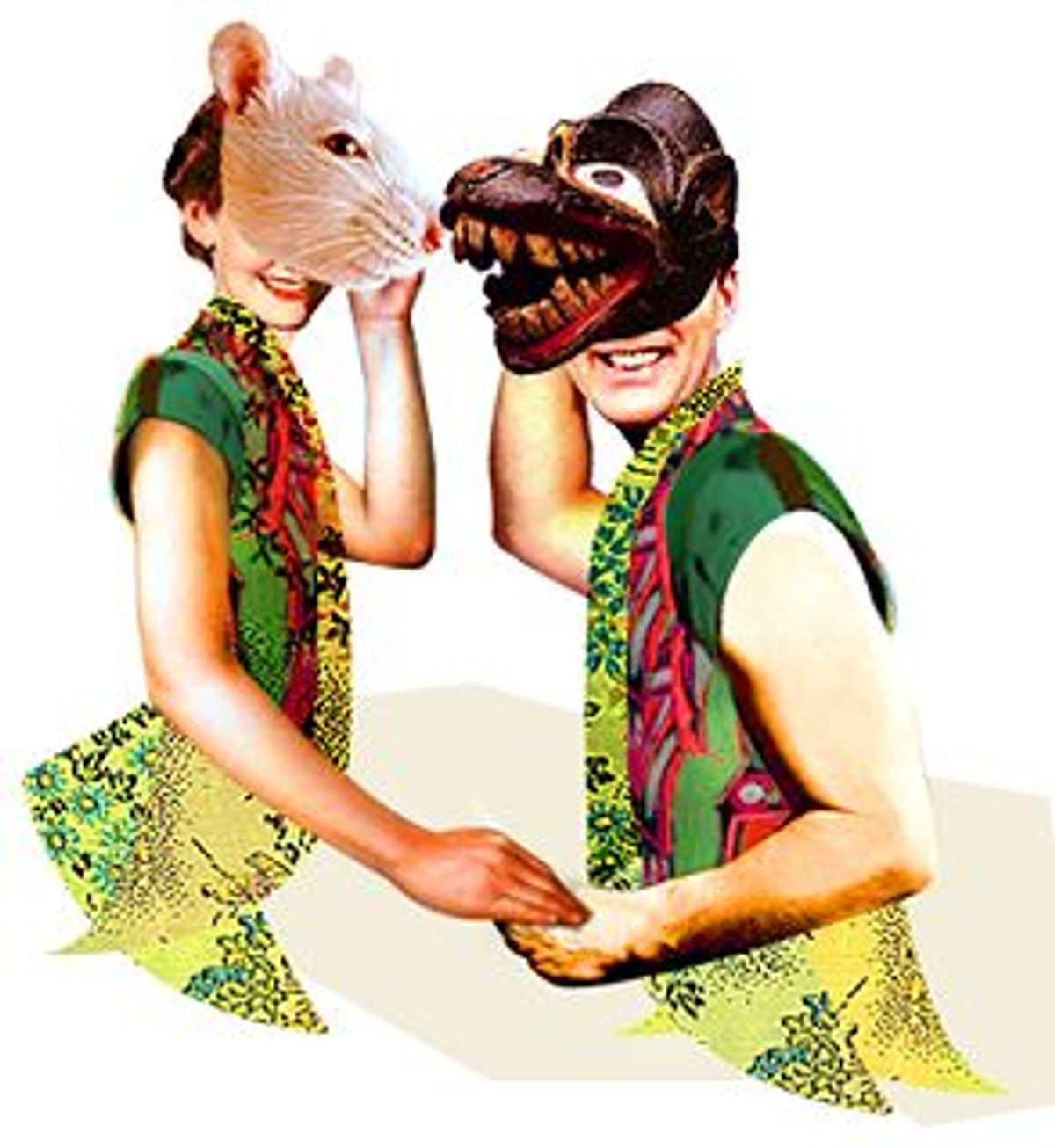 Gene writes that he and Polly are "trying to patch things up after a tough autumn apart," and he'd like guidance. There is good news and bad news; the good news is that both their moon signs (Monkey and Rat) and their sun signs (Sagittarius and Aries), which are both fire signs, are highly compatible, so there is undoubtedly a powerful attraction between them. The bad news is, stellar accord alone can't keep a relationship in orbit!

Despite the outward compatibility of these two melds, several booby traps put their harmony at risk, and the couple will need to defuse them if they wish to overcome their difficulties. As a Sagittarian Monkey, Gene is lively, creative, intelligent, and clever at assessing social power dynamics. The lovable but often tactless Sagittarian will be made more subtle by the Monkey's shrewdness; the Monkey will be made less rank-conscious by the Sagittarian's expansive soul. Gene will probably attract talented and amusing people and inspire them with his ideas, or encourage them in theirs. In return (why not?) he expects to be liked and respected. Nonetheless, he is not as genuinely gregarious as many Sagittarians; he keeps the Monkey's assessing eye on which socializing profits him, and which is a waste of time.

Gene may seem to be an extrovert, but chances are he is a secret introvert, who works with great focus when nobody is watching, and schemes toward greatness in one or several of his many projects. The fact that he is an Earth Monkey, as opposed to, say, a Fire Monkey, heightens the likelihood that he will be a less flashy sort of Monkey, and acts as a curb on his Sagittarian effusiveness. And the Rooster birth hour makes the Monkey detail-oriented and success-minded, which will help Gene when his Sag influence distracts him, but could also make him secretive and overly critical.

The Monkey-Sag meld has plentiful ideas, great ability, real originality and a remarkable capacity for work, but there is a danger that Sagittarius's hard-wired chaotic traits -- changeability and resistance to authority -- will undermine the Monkey's practical good sense. For example, Gene may succeed well at a job or project, only to quit it prematurely and pursue some other course, either because he has lost interest, because a new project has seized his fancy or because stability has made him cranky.

In romantic relations, he is capable of great passion, and the Earth Monkey influence makes him more faithful than some Sag men. Still, he has trouble adapting to suit his partner, or paying enough attention to her once he wins her to assure her of his attachment. He has a tendency to live in his head, and though he doesn't want to lose his mate, a Sag Monkey's special skill is catching people, not keeping them; when he gets absorbed in his projects, he doesn't understand when his partner gets riled. To be happy in a committed relationship, he needs to be proud of his partner, and to be convinced that she admires him and finds him (why mince words?) brilliant.

Polly is a Water Rat, born in the hour of the Rat, and, since Water is the fixed element of Rat (Monkey's is Metal, FYI), Polly is triply a Rat. Rat is a marvelous sign. It is the first sign of the Chinese calendar, and it brings much luck. She should be quick, canny and bright-eyed; this is a girl who knows what side her bread is buttered on. Rats are engaging but not excessive personalities and they understand how to play a group. At dinner parties, they can talk and listen. Rats are programmed to build themselves a successful, enviable future, and they enjoy marriage because they are so good at organizing group efforts, which is what family life is. They don't mind devoting their energy and ego to a team, but they feel free to criticize a partner if he is not pulling his weight.

Gene and Polly may get in trouble here; if he flexes his Rooster-hour predilection to find fault, he will learn that she will hiss every time he squawks. Still, Rats tend not to mire themselves in doubts about their choice of a romantic partner once they have chosen him; absorbed in the joint project of the relationship, they keep the peace. However, Polly's Rat-ness is interfered with by her Aries-ness. Aries is the first sign in the Greek zodiac, and Aries natives like the limelight. The triple Rat already has so many powerful allurements that adding Aries to the blend may give her too much clout -- like a character with triple 18s in Dungeons & Dragons -- and make her scary to play with. An Aries-Rat blended personality will be tremendously charismatic, talented, busy, youthful and charming; but, on the downside, she may be egotistical and bad at sharing, and could have difficulties judging who or what it is that she needs to be truly happy. It is hard, but not impossible, to satisfy an Aries. It is dangerous to criticize one.

A final note: I think people overstate the compatibility between Sagittarius and Aries; there is as much friction as fascination between these two fire signs. They are the two most childlike signs in the zodiac, but they represent different types of children. Sag is the wide-eyed one with a short attention span who accepts each new experience with infectious joy and wants to be loved; Aries is the engaging, self-centered kid who plays her recital piece without being asked and wants to be admired. They thrill each other, but the second an audience comes along, they turn on each other, because they both want all the applause. They have to learn to share attention.

As you see, both Gene and Polly have strong-willed melds full of character, so it's no wonder that, despite the magnetism that draws them together, they have had trouble getting along. How can a Sag Monkey and an Aries Rat play nice? Sag Monkey can continue pursuing his work projects -- the lady Rat respects that, and is undoubtedly pursuing hers -- but he needs to stay alert to her emotional needs. Her meld is not a reticent one, so she surely makes those wishes clear. If you are very busy, schedule dates when she can have your full attention, and when the two of you are out, don't vanish into a Sag dream world, engage with her. Praise her without being prompted. Involve her in your work; she may have good ideas, and will appreciate being trusted. If she feels that you are confident in your career and that you admire her, she'll admire you right back, and everything will be OK. Your attraction to each other is probably strong enough to see you through. If not, Rats are great for you, but you might try a Rat-Libra. One word of comfort; the year of the Snake, which ends Feb. 11, is notoriously tough on Rats and Monkeys. The year of the Horse is mixed, but more promising. If you make it through to Sheep -- 2003 -- you'll be in the clear. Of course, this is all just a hunch.