The president's claim that Enron's chief supported his Texas opponent -- at best an evasion, at worst a lie -- drags the White House a step deeper into Enrongate. 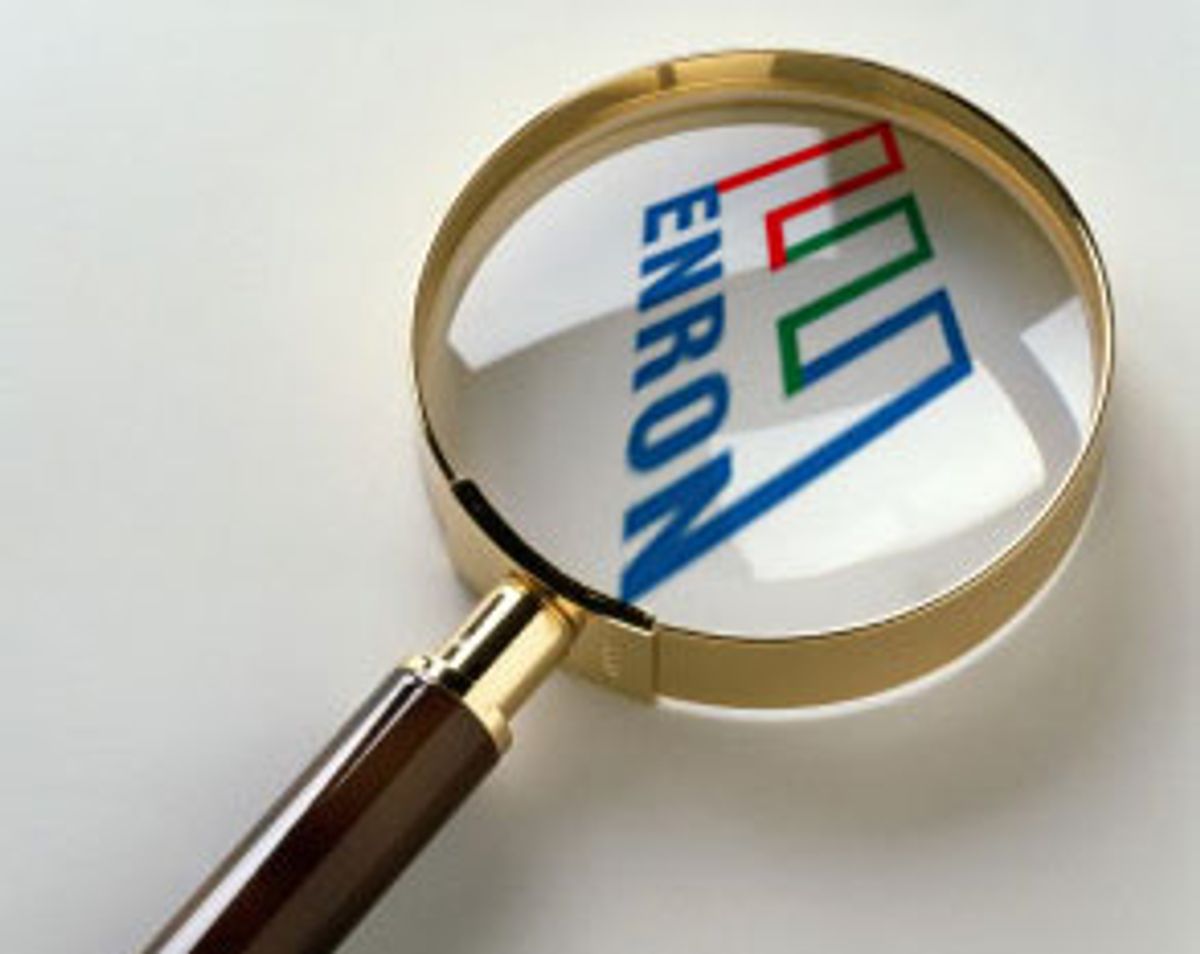 As Washington became engulfed in the Enron firestorm Thursday, President Bush made what may be the biggest misstep of his year-old presidency -- attempting to distance himself from Enron and its former chairman and CEO, Ken Lay, even though the company and its executives have given more than $550,000 to Bush during his short political career.

"He was a supporter of Ann Richards in my run in 1994," Bush said of Lay, "and she named him the head of the Governor's Business Council. And I decided to leave him in place, just for the sake of continuity. And that's when I first got to know Ken, and worked with Ken, and he supported my candidacy."

That sound you hear is the collective guffaw of the American press corps. Given the president's long, well-documented history with Enron and Lay, his comments Thursday seemed strangely desperate -- and destined to fail. At best, the quote gave the appearance that Bush indeed has something to hide; at worst, it was a straight-out lie.

According to records provided by Texans for Public Justice, a political watchdog group that monitors political giving in Texas, Bush received $25,000 from Lay by the end of 1993. Throughout his run for governor in 1994, Bush received more than $146,000 from the Lay family and other Enron execs. Ken and Linda Lay contributed $47,500 to the Bush campaign ($10,000 of that money came on Dec. 1, 1994, after Bush was already elected); the Enron political action committee (PAC) chipped in another $20,000, and other Enron executives gave Bush $79,000.

Texans for Public Justice spokesman Andrew Wheat said the organization did not have a full breakdown of Gov. Ann Richards' contributions from Lay and other Enron execs. In fact, the only organization that has a computerized database of Texas political dollars pre-1998 is the Dallas Morning News. According to public records compiled by that paper, the Lays did give Richards $12,500 during that same period. The Enron PAC contributed an additional $5,000 to the Richards campaign.

So perhaps, on a Clintonian level, Bush was right. Lay was "a supporter" of Richards' campaign. He was just a much bigger supporter of the Bush campaign. The White House refused to clarify Bush's remarks, but a technical parsing of those comments would hardly serve a president who has mocked his predecessor for hair-splitting over the meaning of the word "is."

In an interview with the Houston Chronicle Thursday, Richards' former chief of staff, John Fainter, said (in the paper's words), "It was always assumed that Lay was supporting Bush against Richards because of his longtime support for the president's father." Lay was a longtime supporter of the former president, and was even named as a co-chairman for the Republican National Convention in Houston in 1992.

"I don't have any recollection of him supporting Governor Richards," Fainter told the paper.

Clearly, the violence with which the Enron scandal has wiped the war on terrorism off the front pages has taken the Bush administration by surprise. In another feeble attempt to distance the administration from Enron, White House spokesman Ari Fleischer said both parties are linked to the energy giant.

"If this were to become what people have become so used to in watching Washington, which is a politically charged, politically motivated effort to blame one party or to look only at one party, when clearly Enron is a corporation that has given hundreds of thousands of dollars to both parties, then I think people would think that the Congress is not on the right path."

Lay was in fact a golfing partner of former President Clinton, and reports from the Center for Responsive Politics dating back to 1989 show both parties have benefited from the $5.8 million Enron has spent on political contributions over the years. But while the company has given extensively to both parties, its money has overwhelmingly gone to Republicans. Overall, 73 percent of all Enron's political giving has gone to Republicans, according to CRP reports.

The company's links to the current administration are extensive. Attorney General John Ashcroft was forced to recuse himself from the Enron investigation because of contributions the company made to Ashcroft's reelection campaign. Enron was also among the largest donors to President Bush's 2000 campaign, and Bush's appointee as secretary of the Army, Thomas White, is a former Enron vice chairman. Bush advisor Karl Rove owned more than 100,000 shares of Enron stock until he was forced to sell last year. And Lay has long been a personal friend both of Bush's father, and Don Evans, the current president's campaign chairman who is now Commerce Secretary.

Enron also had the ear of Vice President Dick Cheney and his energy task force as they assembled the administration's energy plan last year. Last week, Cheney wrote a letter to Rep. Henry Waxman, D-Calif., the ranking Democrat on the House Committee on Government Reform, who has taken the lead in Congress for criticizing the White House's Enron ties. In that letter, Cheney said he and his energy task force met with Enron executives six times, but that "Enron did not communicate information about its financial position in any of the meetings with the Vice President or with the National Energy Policy Development's support staff."

Bush had also gone to bat for Enron when he was governor of Texas. In 1997, then-Gov. Bush placed a call to then-Gov. Tom Ridge of Pennsylvania in an effort to help Enron gain a toehold in the state's plan to deregulate its energy market. Whether the call had any effect was unclear. Later that year, Enron got a split decision of sorts from the state's Public Utility Commission: Enron's plan, which aimed at replacing Pennsylvania Electric Company (Peco) as Philadelphia's default electricity provider, was rejected; but the PUC also rejected a Peco proposal that the commission said would have delayed competition in the state's newly deregulated energy market.

After the commission's vote in December 1997, Enron executive Jeff Skilling said he was "extremely pleased" by the PUC's decision, even though his company's proposal was rejected. He called the rejection of the Peco proposal "a courageous step" that would substantially increase the incentives for competition in Pennsylvania.

Fleischer said that nobody in the current administration acted inappropriately on Enron's behalf. On Wednesday, Fleischer told reporters he was unaware of "anybody in the White House who discussed Enron's financial situation." But by the next day, he said members of the administration "had repeated contacts with Enron through the company's plunge into bankruptcy." That included direct conversations between Lay and both Commerce Secretary Don Evans and Treasury Secretary Paul O'Neill late last year.

The call to Evans came in October, as Enron was on the brink of having its credit rating downgraded by Moody's Investors Services. While Lay's attorney, Robert Bennett, said Lay "didn't ask for anything" from Evans, a Commerce official said Lay told Evans "we would welcome any support you think is appropriate."

In addition, Enron COO Lawrence Whalley spoke with the Treasury Department's undersecretary for domestic finance, Peter Fisher, "six or eight times" in late October and early November, and asked the government to intervene on the company's behalf.

"As Enron's negotiations with its bankers for an extension of credit neared a decision point, the president of Enron asked undersecretary Fisher to call the banks," Treasury spokeswoman Michele Davis told reporters.

Eventually, according to Fleischer, Evans and O'Neill decided amongst themselves that no action should be taken, but never told Bush they had talked to Lay. "The president thinks they acted properly and at all times did the right thing," Fleischer said Thursday.

But Waxman said the phone calls show the administration could have done more for Enron employees who had their life savings trapped in Enron stock and were unable to sell. "It is now clear the White House had knowledge that Enron was likely to collapse but did nothing to try to protect innocent employees and shareholders who ultimately lost their life savings," Waxman said Thursday.

Nothing that we currently know implicates anyone in the administration in any criminal behavior in connection with Enron. But the White House is clearly worried that Enron might become the symbol of a concern that many Americans had about Bush before the war on terrorism took over the headlines -- that he cared more about his big corporate donors than average citizens.

"The reason this is so potentially devastating to Bush is that it brings to life in very real terms the notion that when push comes to shove, he's for the big business special interests and not for the little guy," former Clinton press secretary Joe Lockhart told the Associated Press Thursday.

But Cheney advisor Mary Matalin struck back at Democrats in an interview with MSNBC's Don Imus, with a slap at the many Clinton-era scandals: "They act like there's some billing records or some cattle scam or some fired travel aides or some blue dress," a worked-up Matalin complained.

Still, the administration's handling of the Enron bankruptcy has greased the wheels of scandal, not slowed them. The White House has been unwilling to make the work of Cheney's energy commission public, and Bush's disavowal of one of his chief political backers has only piqued the curiosity of the media.

If we have learned anything from Washington scandals over the last 30 years, it is that the coverup is almost always deemed worse than the crime. Bush's failing to talk straight about his relationship with Lay, and his strange attempts to distance himself from the man he calls "Kenny Boy," will only feed the media scandal beast.