On CBS's unintentionally hilarious Supreme Court drama "First Monday," the nation's young and restless high court is a guiding light for the bold and the beautiful as the world turns. 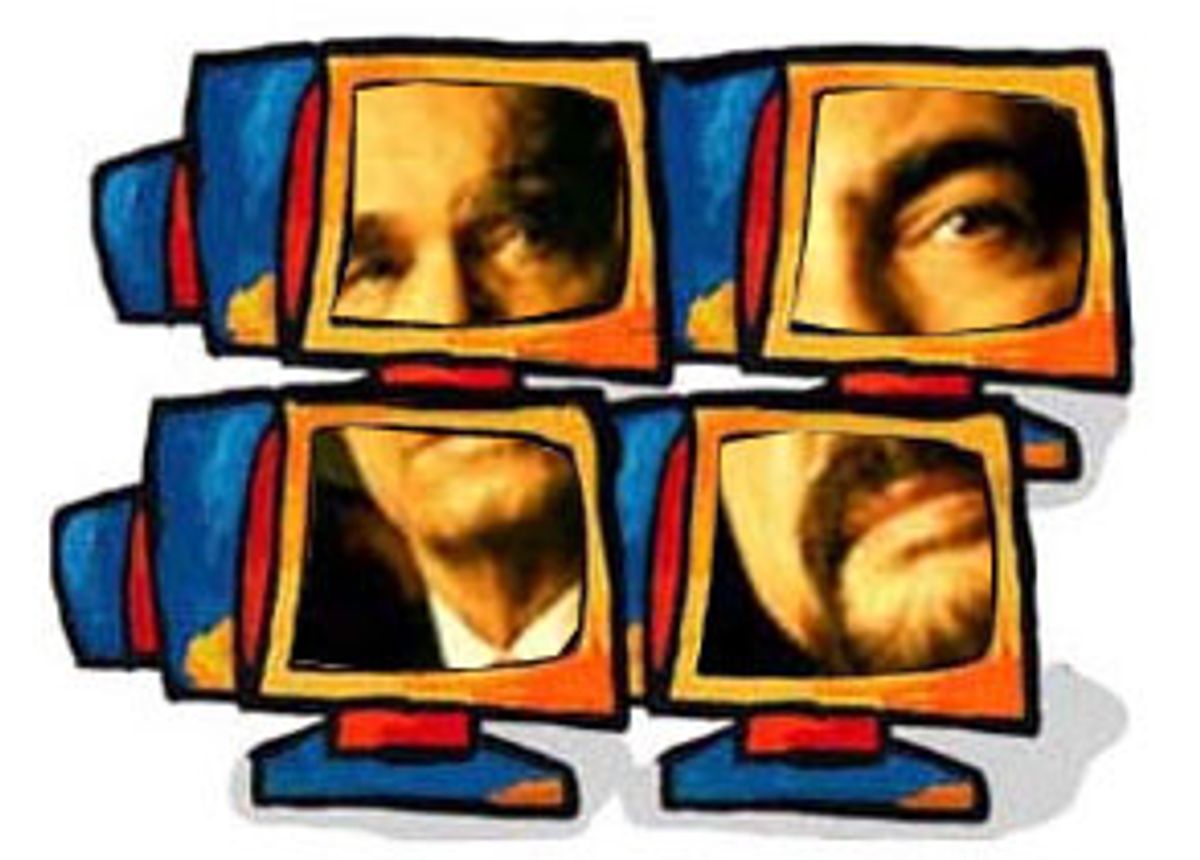 "First Monday," CBS's new melodrama about Supreme Court justices and the clerks who love them, kicks off on a dark and stormy night, inside a Florida state prison with a disconcerting resemblance to an Ian Schrager hotel.

In it, Moses Brown, an underage idiot man-child and shadow puppet enthusiast, is moronically awaiting execution for the murder of a 10-year-old girl, when he is unexpectedly struck by lightning in the exercise yard.

The following day, Jerry and Ellie, newly appointed eager-beaver clerks to Supreme Court Justice Joe Novelli (Joe Mantegna), read about it in the papers and are swiftly moved to profundity.

"Why should the state?" Ellie asks.

If it were even slightly feasible that such an exchange could take place in the Supreme Court -- which, on "First Monday" seems be permanently bathed in a glorious golden light, like the MGM Grand -- "First Monday" might be troubling the way "ER" is troubling. ("Doctor, why are you shouting?") Luckily, the court is packed with such a familiar assortment of hollow clichés -- you can't help wondering when Aunt Jemima is going to take her seat on the bench -- that there's really no danger of anyone taking it seriously.

As a moderate liberal and potential swing vote, Novelli is the wild card in a court split down the middle along the usual lines (conservative vs. liberal, ethnic vs. WASP, boys vs. girls) on the usual issues (death penalty, abortion, Title IX, the right of pre-op transgender Mexicans to seek political asylum in the United States).

On his first day, Novelli is shocked to learn that Chief Justice Brankin, a chain-smoking right-winger with a football fetish, seems to care more about the latest college football polls than about the soon to be refried Brown.

"What did you think I was talking about?" Brankin asks, when Novelli mistakes his reaction to the newspaper for something serious.

"The condemned man being struck by lightning on Florida's death row."

We're on Brankin's side on this one: A guy facing the electric chair who nearly gets fried by lightning is kind of funny, but we weren't familiar with a clause in the U.S. Constitution having to do with irony. (In the show, the crusaders base their case on cruel and unusual punishment.)

Novelli is the new guy, and as his school-bound son explains earlier, things are bound to be a little touch-and-go until the other kids figure out whether he's "cool or wack"; which is exactly what Novelli's brethren and three feisty clerks are trying to discern.

Charles Durning plays Justice Henry Hoskins, a limerick-reciting Irish good old boy who rides around in an electric wheelchair despite being able to stand. Camille Saviola and James McEachin tag-team it as the liberal Jewish and African-American comedy duo, Esther "Weisenheimer" Weisenberg and Jerome "I'm just an old leftie" Morris. If the Supreme Court thing doesn't work out, they could easily take their act on the road.

Consider the following good-natured exchange as Morris and Weisenberg try to recruit Novelli to their anti-death penalty clique while Hoskins bravely attempts to preserve the smoke-filled court's status quo as a frat house for the elderly:

Hoskins: "These wimps trying to brand you?"

Morris: "Shouldn't we be above fratricidal name-calling?"

Hoskins: "Allow me to rephrase. These wimps trying to brand you?"

Novelli: "I plead the Fifth."

"First Monday's" legal eagles toss off the kind of legal clichés usually reserved for first-year law students with very few friends. (Earlier, back with the clerks, Ellie tells Jerry to "look beyond the prima facie evidence" as they study a photo of Novelli in college.) Meanwhile, the wall-to-wall violins soar and swell with such force and feeling you half expect the building to run afoul of an iceberg. The score meanders into "The Sound of Music" territory whenever the characters take a turn for the frisky. Later in the scene, for instance, Hoskins recites a limerick and wheels off, leaving his three fellow brethren to look on and shake their heads fondly --

Morris (warmly): "I hate his limericks."

Weisenberg (saucily): "I thought it was just his politics."

And somewhere, a piano is lightly tickled. (Oh look, the kittens got into the yarn again!)

But such mirthful moments can only lead to trouble. The justices gather together in an anteroom, abuzz with excitement and team spirit. Brankin puts out his hand (the others lay theirs on top of it, Harlem Globetrotters-style) and rallies the team with a hearty cry, "Hey, first Monday in October! Let's go out there and make history!" (The Supreme Court being, like, the Super Bowl of legal stuff.)

A few moments later, as they prepare to hear their first case of the day, Weisenberg calms Novelli down by leaning in and sharing a little secret.

"I wet my panties my first day on the bench."

I wonder if Ruth Bader-Ginsberg is watching this.

But at least the clerks are serious. Jerry and Ellie are all heart and grit and quivering chin-thrusts. Novelli's third clerk, a conservative Latin firecracker named Miguel, is the odd man out in this legal "Kumbaya" session, though no less passionate about the issues.

Early on, Ellie, Jerry and Miguel pay a visit to Julian (or, as he is described on Paramount's Web site, "the impetuous Julian Lodge"), Brankin's smirking clerk. Julian recommends that Novelli be advised against granting the stay, on the grounds that the chief justice won't like it.

"It's our job to decide whether a case has constitutional merit," Julian explains.

"Whether a man lives or dies does not have constitutional merit?"

"And who decides that," Jerry retorts, "you?"

It's all so very deliciously "Upstairs, Downstairs." As the impetuous Julian Lodge and Novelli's Keystone Klerks argue the broader points of law as though beating a mosquito with a large ham, the justice scrambles to find himself a pair of shoes. (He was so nervous, you see, he showed up to work in his slippers!)

Soon, Ellie is running around trying to dig up some case law to justify Novelli's signing the stay. With all the shoe shopping, however, she just can't seem to get it right. "Don't be sorry, Ellie. Find me something I can fight with!" (But what did you think of the Ferragamos, boss?)

In "First Monday's" Supreme Court, there is very little poring over case minutiae and a lot of running, yelling and last-minute discoveries of new evidence. Dramatic tension is further underscored via the gasbags on "Curveball," a fictional news show hosted by real-life CNN Supreme Court reporter Charles Bierbauer and guested by real-life pundits Barry Scheck and Dennis Prager.

In a melodramatic twist -- and the show's only truly disturbing moment -- the guards at the Florida state prison cannot be reached in time to stop lightning from striking twice, as it were. (Their $8 million phone and intercom system has crapped out yet again.) After a hard day of making friends and finding shoes, Novelli takes it in stride. He's got the rest of his life to get it right, after all, and eight more juveniles on death row. He picks up the phone and dials, waking up Brankin, who is at home, in bed, and lets him know, in no uncertain terms, that tomorrow he'll be signing stays of execution for all of them.