The photographer of nude young women has been pilloried as a pornographer, but it's hard to think of a less voyeuristic photographer working. 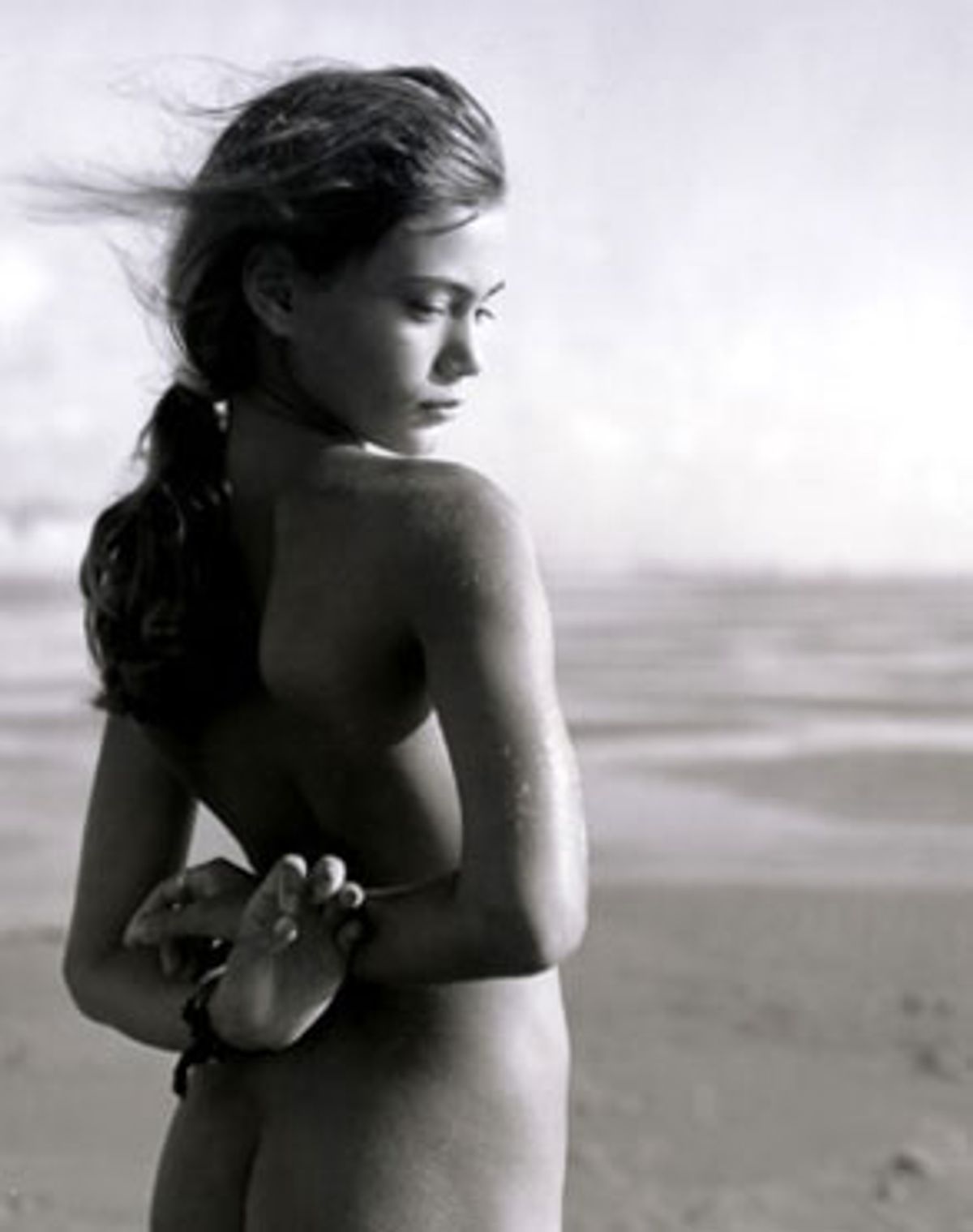 I don't want to do anything to besmirch Sturges' reputation any more than it already has been. As any photographer who works with such a subject might expect -- hell, as anyone who has the temerity to address the question of sex and minors knows -- Sturges has weathered his fair share of abuse. I'm not just talking about the raised eyebrows or titters his work sometimes provokes, or the casual unthinking dismissal of him as a pervert. Beginning in 1990, the FBI conducted an investigation into Sturges' work and his subjects in an attempt to prosecute him as a child pornographer. The case was rejected in toto by the grand jury hearing it. And in 1998 grand juries in Alabama and Tennessee indicted Barnes and Noble on child pornography charges for selling monographs of Sturges' work. (Randall Terry, of Operation Rescue, takes credit for bringing the work to the attention of authorities, as well as for his followers' actually destroying some books in stores.)

For a photographer whose work is exceptionally composed, tranquil and, above all, mature, Sturges provokes a great deal of suspicion and even revulsion. But the more you look at the openness of his photographs, the harder it is not to feel that those reactions come from the misguided belief that acknowledging the beauty and sexuality of minors is the same thing as pedophilia. "Sexuality in the American concept," Sturges wrote in the afterword to his first monograph, "The Last Days of Summer," "especially the American legal definition -- is supposed to begin at age eighteen as if a knife blade drops ... our arbitrary demarcations serve more to confound our collective sexual identity than to further our social progress."

It's hard to think of a less voyeuristic photographer working. In photograph after photograph, Sturges, who is showing recent work at the Louis K. Meisel Gallery, in Manhattan (through Jan. 29), allows his young subjects to meet his camera with the steady gaze of preternatural seriousness you see in Victorian photographs of children -- although unlike those photographs, in which the sexuality of both the subject and the photographer's gaze is submerged and unacknowledged, they're far from creepy or voyeuristic. Even if Sturges' intentions weren't clear from his work -- and I believe they are -- it would simply be impossible, from a practical and technical standpoint, for his work to be either surreptitious or voyeuristic.

First, the camera he uses is extremely large, 8-by-10, and tripod-mounted, which makes it impossible to hide or move, and requires the subjects to pose. (The size of the camera, as photography critic A.D. Coleman has noted, is also evident from the graninlessness of the prints. And, apparently, many of Sturges' subjects have, over the years, become so familiar with his process that they are now able to act as his assistants.) Second, Sturges forms ongoing relationships with his subjects. He does not follow the standard procedure of having his subjects sign release forms when he takes their pictures because he doesn't like the idea that the image is out of the subject's control once the release is signed.

"When I want to use a photograph," he has said, "I contact each person, explain the context in which I wish to exhibit or publish the picture, and get permission for that specific purpose. Either I stay in touch with people or I don't deserve to use their pictures. People mature, grow older, change. I never want to be guilty of making assumptions about those changes."

The emotional content of Sturges' photos lies precisely in how he documents those changes. "The prints somehow kept them for me," he says of why he has always chosen to photograph friends. Returning to the same communities year after year, Sturges photographs his subjects at various stages in their lives. Often a person's most distinguishing feature -- say, the large, dark, calm eyes of his subject Fanny -- stays the same though the body has changed, from child to young woman. These transformations occur again and again in Sturges' work, the result of his commitment to photographing the same subjects. The totality of Sturges' project -- the ongoing documentation of his subjects -- mitigates against the very idea of photography, which is to freeze a moment in time, or at least points out photography's limitations.

These photos are about the inadequacy of photographs next to the relentlessness of time. That may be why, in so many of them, his subjects are alone on vast beaches stretching out to the horizon -- figures set against eternity -- or why the sky so often seems overcast in his work, a portent and a prophecy. Sturges is drawn to girls and young women because the awkward perfection of adolescence is the most temporary state of all. We are looking at a beauty that will likely deepen but cannot remain in its present state. In one of the photographs, one of Sturges' most frequent subjects, a slim blond named Misty Dawn, stands in a doorway, itself a symbol of passage. In another, Vanessa and Mylene stand on a beach sheathed in plastic dry cleaning wrap. The presence of the artificial is startling enough in Sturges' work; the photograph is the most playful and blatant metaphor for his work as an attempt to preserve his subjects in a pristine state.

In one of my favorite of his new pictures, Vanessa, a redhead with huge, piercing eyes, reclines on a beach while a little blond girl named Adèle reclines in the opposite direction on Vanessa's outstretched legs. They are each way stations on the road to maturity, their own miniature timeline. This photo is one of several that Sturges has shot in color. They are certainly beautiful, the color as delicate as the lambent light in the black-and-white photos. What they lack is the haunted lyricism of the black-and-white shots, the sense -- as the film critic Paul Coates has written -- of people photographed in black-and-white consigned to their own future ghostliness. (It should be noted that several of the photos from his current gallery show appear in his most recent monograph, "New Work 1996-2000." The book is published by Scalo, as was his last monograph, simply titled "Jock Sturges." Much as I love his first two Aperture monographs, "The Last Days of Summer" and "Radiant Identities," I commend the two Scalo collections for the superior quality of the reproductions, particularly the subtlety of Sturges' delicate gradations of light and shadow.)

It's no wonder, given Sturges' desire to capture each moment in time, that so many of the new photos look ageless. The cloudy water in some of them calls up the cloudiness of old photos, the slight, hovering opacity that stands in for the blur of memory. In these photos, partially hidden by water, crouching in the shadows at the gnarled roots of trees, the young women could be woodland creatures, spirits his camera has willed into the open. Often, as in the photograph entitled "Lotte, Allison, et Mylene," the girls seem joined by a secret knowledge, as if they were magical beings he had encountered on a journey. And Sturges seems caught between deciphering their mystery and simply drinking it in.

As always, Sturges allows his subjects space. That is not to say that he is distant from them, or that he pins them under his gaze in the way that, say, Richard Avedon traps his subjects in his frames. You get the feeling, looking at Sturges' work, that he thinks of himself as an observer creating a safe space for his subjects to reveal themselves. And the consistent qualities I identified in his photos -- composure, tranquility, maturity -- are more than matched by those qualities in his models. In the vast majority of his work, the subjects return the camera's gaze, not challenging it but simply meeting it, unashamed, natural, utterly comfortable with who they are, even if their bodies sometimes betray the awkwardness of adolescence.

Nude, they are not even attempting to hide. There's no need for provocation here because it's their unself-consciousness that confronts us. One of the most taboo facts of our society is also one of the most self-evident: Older men like to look at younger girls (that doesn't mean they are ready to engage sexually with them). Sturges' gift -- and the thing that makes him seem so dangerous to some -- is that he acknowledges that, and has removed lasciviousness from his gaze. "Lotte, Alice and Nikki," a color photo of three blond girls (his subjects are often grouped in three, as if Sturges were ringing endless variations on "The Three Graces") in a reedy pond focuses on the braids that emphasize the length of the girls's backs, the hollow of thighs that give definition to buttocks, the diagonal rows of bone visible in the bent back of one model. This is a photo where no one looks at the camera and because of that it feels even more unself-conscious than the photos in which Sturges' models confront the camera. If they are this comfortable with their beauty and sexuality, the picture seems to ask, why shouldn't we be? Why, in the name of decency or protection or whatever, should we deny what is plainly there for anyone with eyes to see?