To hell with happy endings

A sober, toned-down Sundance Film Festival delivers a crop of dramas dour even by indie standards. 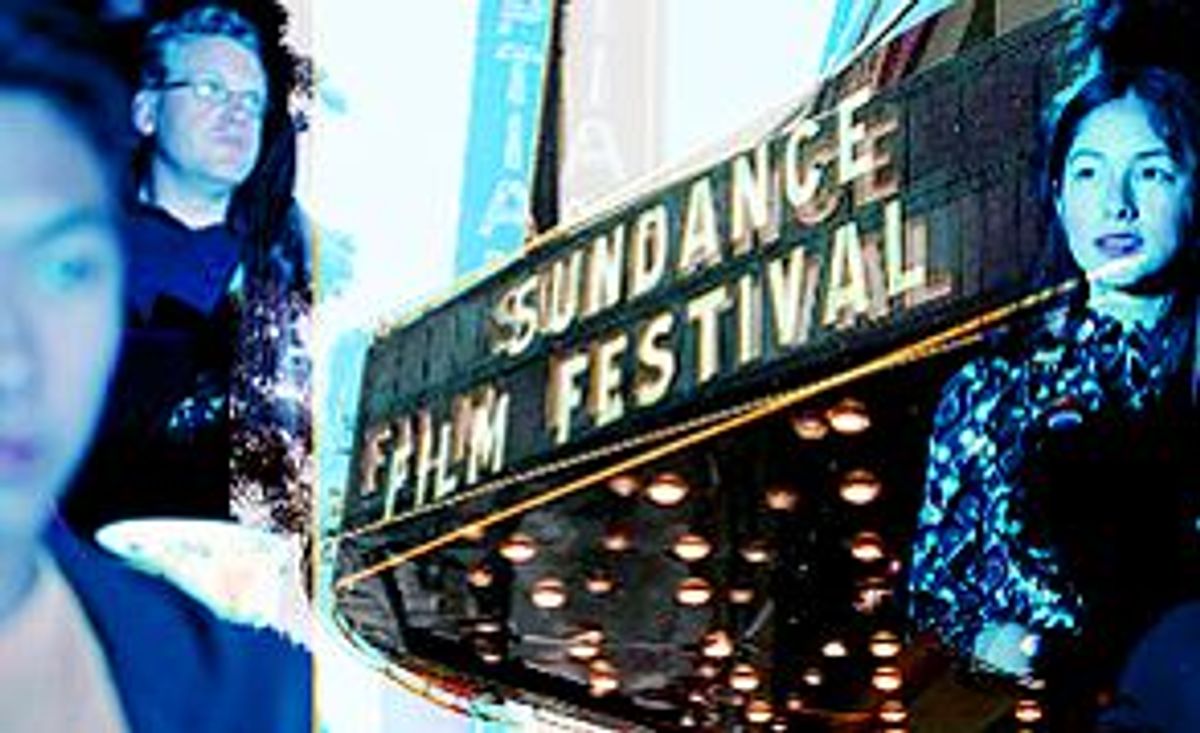 Try as she would, Karen Moncrieff could not eat her soup. The director's first feature film, "Blue Car," had earned the former soap opera star tremendous attention at this year's Sundance Film Festival. Her schedule of back-to-back interviews in a Park City restaurant meant that her lunch, barely touched, had been cold for a long time. Yet neither hunger nor exhaustion could prevent her eyes from lighting up when she spoke to me about the character ambiguities in her film.

"I'm really interested in people who are flawed and who struggle. To me, they are simply more real than people who are perfect," she said. "I wanted [the protagonist of my movie] to be a fully well-rounded, fleshed-out human being, someone ... who makes mistakes, who shows very bad judgment at times, who struggles, but someone with whom our sympathies still lie. Meg is essentially searching for connection: Who can't relate to that?"

Moncrieff's coming-of-age story was just one of the more than 100 films that screened at the 18th annual Sundance Film Festival last week in Park City, Utah. "Blue Car" didn't compete -- which means that it was a showcase film not up for a prize -- but its exploratory, personal tone fit in perfectly with dozens of feature films. In Moncrieff's words, the balanced, lyrical tale about a 17-year-old girl captures the "perfect confusion of child and adult."

Following the legacy of "sex, lies, and videotape," "Welcome to the Dollhouse" and "Chuck and Buck," edgy, taboo-shattering subject matter is expected at this festival of film festivals. But this year, with little exception, the festival's strongest dramatic selections sought not to shock, but to replicate the tough realities of ordinary life. They did so with subtlety and grace -- and very few happy endings.

At first glance, plot summaries sounded trodden and worn. But the films themselves were well executed, delivering a handful of nuanced portraits that fearlessly examined the motivations of their naive yet likable heroes.

Take, for example, Rebecca Miller's "Personal Velocity," winner of the Grand Jury dramatic feature prize. Shot with a digital camera in 17 days, the film adapts three of the writer's own short stories. Each is a portrait of a woman in psychological transit. On paper, the tales read like programming for Lifetime Television: In the first, Kyra Sedgwick plays Delia, a young mother who has finally gathered the courage to leave her abusive husband.

But Miller's use of multimedia forms and a voice-over with lilting prose complete Delia's story in a way that helps to explain how someone so outwardly strong succumbed to consistent abuse. Miller homes in on Delia's character deficiency -- power -- then prescribes the cure in the most unexpected way.

Nor does Miller's sensitive film go for easy endings. All three of "Personal Velocity's" vignettes -- one of which stars indie idol Parker Posey in a decidedly unsentimental role as an ambitious cookbook editor -- drops off its struggling heroines at the intersection of hope and restraint. They each play like a solemn fugue that ends unexpectedly in a major key.

Chock full of internal motivation, Moncrieff's "Blue Car" features a luminous Agnes Bruckner as Meg, a high school student with a flair for putting heartbreak to page. With a mother too busy to notice, a disturbed younger sister and a father who has abandoned them, Meg turns to her male English teacher for friendship and guidance. "Blue Car" doesn't judge its characters or portray any of them as saintly or demonic, yet it doesn't allow anyone to get away with depravity, no matter how temporary.

Other Sundance fare offered even darker character studies. Todd Louiso's "Love Liza," whose screenplay by Gordy Hoffman nabbed the festival's Waldo Salt Screenwriting Award, stars Gordy's little brother, Philip Seymour, as Wilson Joel. The younger Hoffman pours himself into Wilson, a new widower whose emotional release valve is so underdeveloped that the only way he can think of to deal with his wife's suicide is by getting high on gasoline. Intimate and sensual (you can practically smell the oily gas fumes), the film's silent, lingering close-ups give you a real sense of the overwhelming confusion that triggers Wilson's habit. The tale is a tad overwrought, but Wilson's journey to healing works as a concave character arc; instead of climaxing upward, it collapses downward, to float back only tentatively on wings clipped by ambiguity.

Then, from Sundance's "premiere" category -- films already set for distribution -- comes a different character study of a man taking desperate measures. In George Hickenlooper's "The Man From Elysian Fields," Andy Garcia plays Byron Tiller, an impoverished writer who becomes a reluctant gigolo to support his wife and son. Once you accept the premise, "The Man" succeeds on two levels. Byron suffers foreseeable consequences in his neglected marriage. And then Mick Jagger, as Byron's pimp, turns the film into a ribald comedy, with line after line of dry, straight-faced wit.

Feel-good films were in short supply. Few attempted the exuberance of "Hedwig and the Angry Inch" (2001), the heady lightness of "You Can Count On Me" (2000) or the goofiness of "Happy, Texas" (1999) -- all generators of big buzz at their respective festivals.

Still, there were several funny competition entries worth noting. The first was Steven Shainberg's "Secretary," which won a special jury prize for originality. Under an umbrella of sadomasochism, "Secretary" tackles the dominant-submissive head games between the self-effacing Lee Holloway (Maggie Gyllenhaal) and her older boss (a wicked James Spader). An ironic feminist fairy tale, "Secretary's" many jokes pave the way to a happy ending, but only after some important initial bleakness establishing Lee's desire to be controlled.

These names shouldn't surprise anyone: For years, the kind of independent films that play at Sundance have often featured big-name celebrities. The problem, say some critics, is that even smaller films are being ignored. Geoff Gilmore, the festival's co-director, says that Sundance isn't compromising its values to include celebrities. In the online trade daily Indiewire, he said that stars like to work on smaller films with no-name directors, which doesn't necessarily make the star-studded films any less valid artistically -- or give them a better chance of being included in the festival.

Still, the fact that almost every Sundance film now boasts a known cast does have advantages: namely, terrific acting by the likes of Mira Sorvino ("Wisegirls"), Robin Williams ("One Hour Photo") and Nicole Kidman ("The Birthday Girl") redeemed psychological thrillers with varying degrees of plausibility. Similarly, the jury commemorated fine performances by America Ferrera and the inimitable Lupe Ontiveros in the otherwise-mediocre audience award-winner "Real Women Have Curves," about a Mexican-American high school student who comes to terms with her heritage and her future during a summer in her sister's sweatshop.

As the features get grittier, documentaries get glossier. And while character-driven bleakness reigned over this year's dramatic feature selections, both documentary competition winners explored historical identity within our increasingly globalized world.

Case in point: Lee Hirsch's expository feature debut "Amandla! A Revolution in Four-Part Harmony" -- 10 years in the making -- examines the role of freedom songs in the fight against apartheid. With interviews, historical footage and recent recordings, the film manages to cut across several different themes -- racism, freedom, the power of music. (Incidentally, it ends on a jubilant note.) And on a microcosmic level, Gail Dolgin's and Vincente Franco's "Daughter From Denang" won the grand jury prize for its portrayal of a Vietnamese-American woman's journey to find her roots.

Are bleak, dark features the result of sensitive programming in the aftermath of Sept. 11? In the trade magazines, industry insiders claimed that their business has been unaffected. But you can't help wondering why the indie world would be exempt.

There were fewer filmgoers at the Sundance festival this year, but the films that screened sold even better than usual. After 10 days, 23 films shared a $17 million booty. Some say that a slower year at the Toronto Film Festival -- which was put on hold by the terrorist attacks in America -- directly translated into better business as distributors picked up films after holding back in September.

Did the terrorist attacks affect content? Certainly the serious films that played at Sundance this year were largely developed and shot before Sept. 11, but festival selections were made afterward (and even some of the films were finished in the last few months). And undoubtedly, these are more depressing times -- with a faltering economy, war and terrorism. So even if there isn't a causal relationship between bleak movies and bleak times, it's clear that movies are at least echoing the ambiguity and indecision of the current moment.

At one question-and-answer session, Joe Carnahan, the director of police action drama "Narc," told an audience about trying to find a way to end his film. Unable to decide on one ending, he shot three versions. The one he went with refuses to shore up the plight of the protagonist, leaving the entire plot of the movie unresolved.