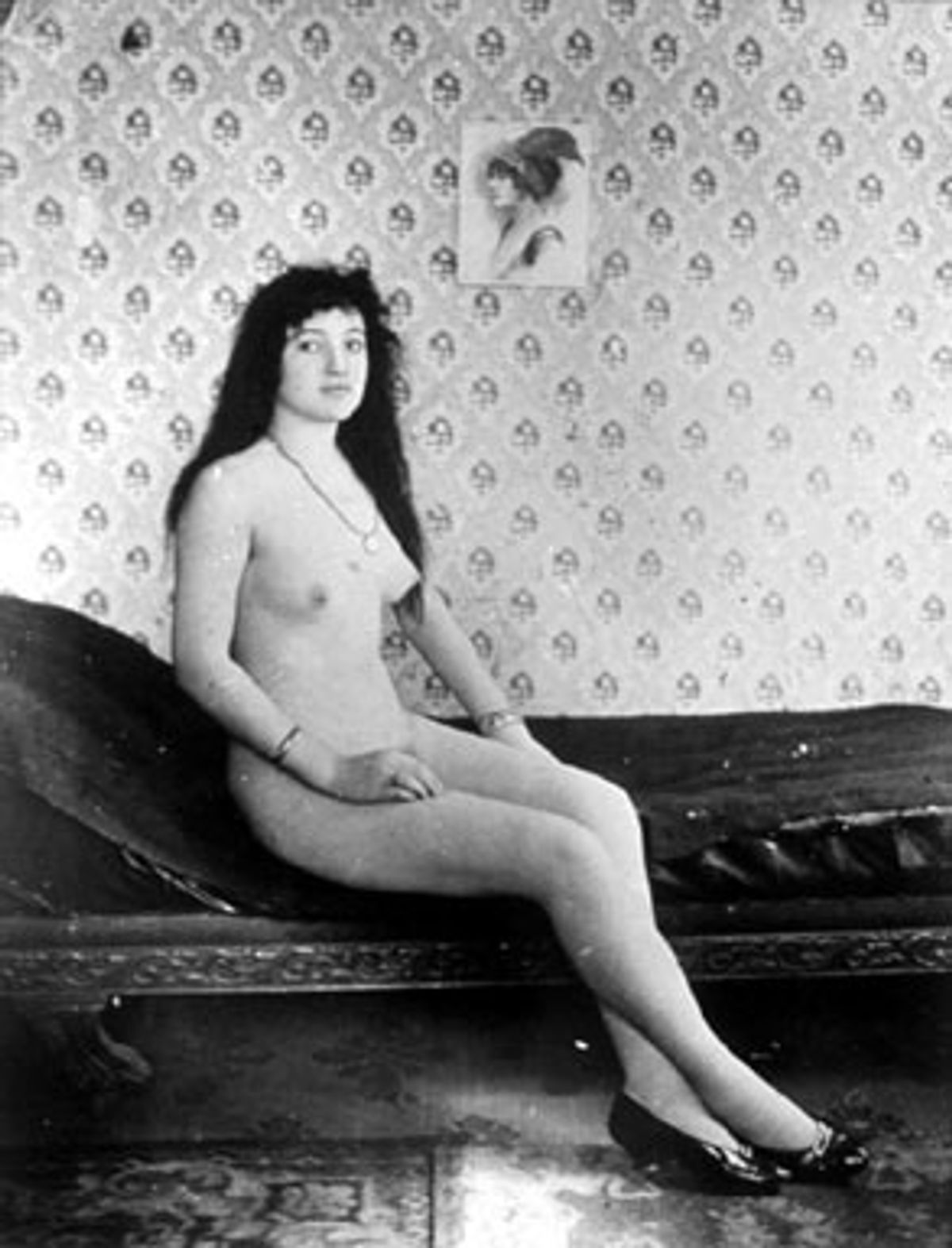 Our story begins in January 1898, when New Orleans Alderman Sidney Story made prostitution legal in a certain neighborhood in New Orleans. Wait. His ordinance didn't state prostitution was legal exactly. In fact, it said whoring was illegal in any neighborhood other than the blocks that stretched from Iberville Street to St. Louis Street and from North Robertson to North Basin.

Alderman Story was chagrined when the newspapers dubbed this new cathouse neighborhood "Storyville." Fourteen years later, in 1912, an allegedly deformed, Toulouse-Lautrec-like photographer took a series of sympathetic photographic portraits of a group of Storyville whores. (And 66 years later these photographs would be responsible for the unleashing upon America of a naked, prepubescent Brooke Shields in Louis Malle's 1978 film, "Pretty Baby," in which Shields and Susan Sarandon starred as the Storyville mother and daughter whores with whom shutterbug Keith Carradine is obsessed.)

A quarter of a century later, that movie has lost some of its cultural influence. But Ernest J. Bellocq's (1873-1949) Storyville work (which was only of women, not kids) continues to intrigue and mystify. An exhibition of 37 new prints (four never seen before) runs through Feb. 2 at the Julie Saul Gallery in New York's Chelsea neighborhood.

What is striking about these photos is how at ease most of the women appear, posing naked among the domestic clutter of their lives. In one case, a pleasantly nude woman poses with several large pillows decorated with a bulldog, a football and an American flag. A handout accompanying the Saul show reminds us that "many rooms in Storyville were decorated with a collegiate theme; this is probably a Mississippi State University or a Yale University pillow." As for these women's naked bodies, onlookers need to remember these assorted breasts and bellies predate Calista Flockhart, let alone Marilyn Monroe. In a recent New York Times review of the show, Vicki Goldberg felt the necessity to warn, "Some of the woman are slim and shapely, some dumpy with distinctly overripe curves." "Dumpy" is a modern-day judgment, and perhaps the wrong term to describe female body image c. 1912.

That said, Bellocq's story really begins with his death in 1949, after he had become a senile photographer who took photos of boats. A jazz-loving junkman named Larry Borenstein found Bellocq's old glass negatives (glass plates were coated with light-sensitive silver salts and used to create instant negatives) and showed them to a Storyville historian named Al Rose. Then a photographer named Dan Leyrer, who claimed to have known Bellocq in the old days, made prints from the glass negatives.

Enter photographer Lee Friedlander, who heard about Borenstein's prints in either the 1950s (so says Susan Sontag) or in the mid-'60s (as say various press releases). Either way, Friedlander bought all 89 negatives and then went to Eastman House in Rochester, N.Y., to study how to print the damn things. Friedlander -- well known for his photos of beat and jazz musicians -- also became interested in taking Robert Frank-influenced street and motel photographs.

In 1967 the Museum of Modern Art's photography curator, John Szarkowski, included Friedlander in the notorious "New Documents" exhibition, the show that introduced the general public to the nudist camp freaks of Diane Arbus. In 1970, Szarkowski and Friedlander successfully presented Friedlander's prints of the Bellocq negatives to America. The MoMA exhibition catalog contained a loose transcript of tape-recorded conversations that Friedlander had conducted with various characters who claimed to have known Bellocq. Johnny Wiggs, a New Orleans cornetist, remembered that Bellocq possessed a pyramid-shaped head. Another witness claimed Bellocq was a hunched-over dwarf. The official MoMA portrait of Bellocq was that of a deformed freak, an asexual outcast the Storyville whores felt comfortable posing for because they were social outcasts as well. But this was a very 1970s view.

Meanwhile, back in New Orleans, Al Rose's kid, Rex, had fixated on the photos of naked women his dad had found. When Rex was old enough to leave home, he began investigating Bellocq's life and discovered that this odd photographer wasn't so odd after all. He probably stood as a regular guy. He even seemed a bit of a dandy, a prominent member of a New Orleans camera club. Rex Rose himself, a sturdy man with dark hair, was part of a panel discussion conducted at the Julie Saul Gallery this past December.

"Bellocq has been described as an insane dwarf," Rose said. "He's become a Paul Bunyanesque myth. I haven't been able to find out that there was anything unusual about him at all. I got his medical records. No mention of deformity. At least half the stories report him as a regular guy."

Friedlander is reluctant to talk about the man. "I've never been too interested in Bellocq's story," he says. "I was interested in the pictures. I'm not a historian. I asked a few people questions. I did a little tape recording for John Szarkowski."

Bellocq seems to incite debate. In 1996 writer Janet Malcolm floated up a remarkable idea about a normalized Bellocq in the New York Review of Books: Why even assume the women he photographed were whores? Rex Rose had searched the New Orleans Police Department's photographic records of women arrested for prostitution and never found any faces that matched the subjects of Bellocq's photos. This is inconclusive, of course, because prostitution was legal in Storyville, but one of these girls might have strayed past Iberville Street.

At the Saul Gallery talk, panelist Steven Maklansky, curator of photography at New Orleans Museum, pointed out that in some of the photographs the double parlor doors in the background have been blocked with furniture or wires "so no one could walk in on them." Is this precaution necessary in a whorehouse? Malcolm herself eventually disregarded her idea that the women weren't chippies and reported that Lee Friedlander told her that the wallpaper in some of the photographs had been identified as that which had once lined the rooms inside Lulu White's Mahogany Hall bordello.

Indeed, in the earlier 1970s MoMA booklet, horn man Mr. Wiggs tells a long anecdote about salvaging a bunch of Mahogany Hall wallpaper samples when the old whorehouse was torn down. "I wouldn't take the wallpaper home because I'd have to answer too many questions," he reported. Mr. Wiggs' lengthy anecdote continues with his story of how he saved the wallpaper in disinfectant, but a cleaning lady burned it.

Since the assumption that Bellocq was a physical freak has been challenged, let's toy with the idea that the women in his photos were not prostitutes. After all, there was no professional reason for those women to pose nude for Bellocq. Although various Storyville "blue books" were printed containing professional portraits advertising the girls, each whore was always dressed. Prostitution may have been legal, but photos of naked women brought the vice squad. (A panelist at the Saul Gallery even complained of the historical lack of nude photography found in New Orleans.)

"The best explanation is that the [women in the photos] are Bellocq's lovers," suggested one Joseph L. Ruby of Silver Spring, Md., in a letter to the editors of the New York Review of Books on Jan. 9, 1997. "The photos are a personal record of mutually enjoyable sexual relationships." After the magazine printed Ruby's suggestion, Janet Malcolm rather unconvincingly shot down his idea by pointing out that Edward Weston's lovers always look "grave, almost grim" in his nude photos of them while Bellocq's Storyville prostitutes are cheerful, thus proving the "uncomplicated platonic nature of their relationship to the photographer. [They] are horsing around with a pal who has a camera."

So probably they're whores just horsing around. But again, maybe not. We'll never know for sure. Another mystery concerning Bellocq's photos are the defaced women. Roughly a dozen negatives have the models' faces rubbed off in a black swirl. The resulting prints look as if Jackson Pollock has doodled over the naked women's faces. "Why are some of the faces scratched out?" Lee Friedlander asks rhetorically. "Nobody knows. I think Bellocq did it himself, but there is no way to know. Some people think his brother, the Jesuit priest, did it, but I think that's silly. I don't really know." Then Friedlander says, "Maybe Bellocq had some ... " He pauses, and says, "Maybe he was ... " And pauses again. "I just don't know," he says. "I haven't a clue."

Whoever did it for whatever reasons, "These [defaced] pictures are actually painful to look at," Susan Sontag wrote in a foreword to a 1996 edition of Bellocq's work. Sontag added, "But then I am a woman and, unlike many men who look at these pictures, find nothing romantic about prostitution. The part of the subject I do take pleasure in is the beauty and forthright presence of many of the women, photographed in homely circumstances that affirm both sensuality and domestic ease, and the tangibleness of their vanished world."

Whatever one thinks about prostitution, only a few will be able to afford these women at today's prices. The ones that hang in the Julie Saul Gallery are one-of-a-kind, created by Dan Leyrer before Friedlander bought the negatives in the 1960s. The most expensive one goes for a cool $45,000, but you can buy the nude reclining among the university football pillows for just $25,000.

Lee Friedlander's quick and final words on the photographer that he and John Szarkowski unleashed on the world: "I just thought they were beautiful pictures. I just wanted to keep them going if I could. I'm only interested in the pictures. Whatever romance anyone wants to have with Bellocq, let them have it."