The veep from Big Business just doesn't get it: Hiding behind executive privilege only reinforces the sense that he's hiding something smelly. 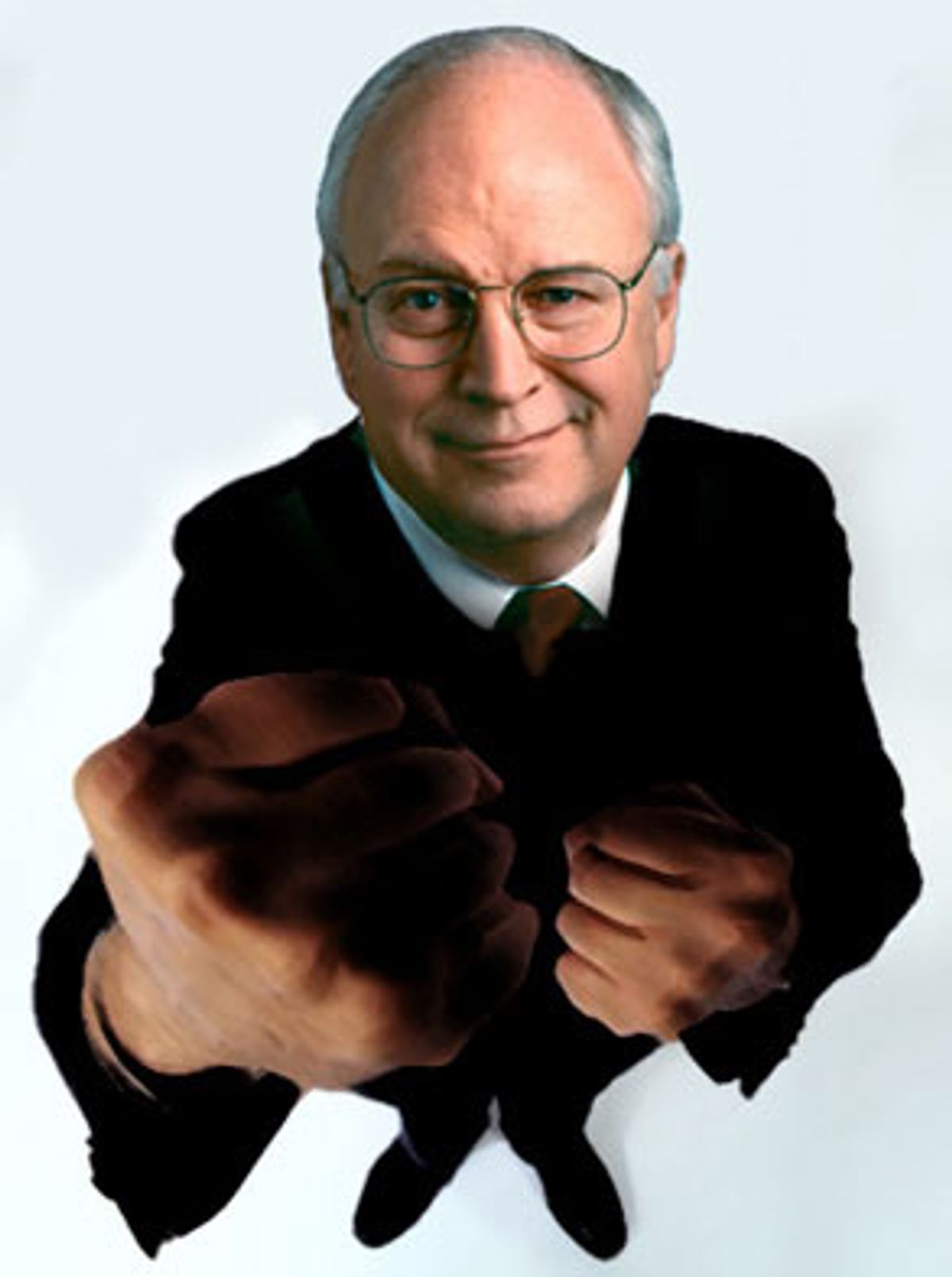 Last spring, Vice President Dick Cheney closed the doors of the meetings of the energy policy task force he headed. At the time it seemed a signal of the spirit our new "CEO president" wanted to bring to the executive branch: To hell with "sunshine laws" and public accountability; the new administration was going to Get Things Done like a Fortune 500 company, and if you're Getting Things Done the last thing you need to be bothered with is public oversight.

A lot has happened in the year since. If there was any doubt that big corporations operating without sufficient public accountability can run off the rails and cause a lot of damage, Enron has sealed the case.

This sea change in perspective does not seem to have penetrated the bunker Dick Cheney has been inhabiting, figuratively and literally, since Sept. 11. While the collapse of Enron is giving the nation a dramatic lesson in the importance of conscientious public disclosure, Cheney is still manning the barricades, pinstripes waving, defending the Bush team's dearly held principle: "Damn the public -- secrecy first!"

In stonewalling the request by Congress's General Accounting Office for records of the energy task force's meetings, Cheney has invoked the hallowed principle of executive privilege. He told a weekend news show that the request is "unprecedented in the sense that it would make it virtually impossible for me to have confidential conversations with anybody ... You just cannot accept that proposition without putting a chill over the ability of the president and vice president to receive unvarnished advice."

That may be unfair. It may be simplistic. It may ignore fundamental issues of the balance of power among the three branches of government upon which the best legal minds may differ. But it is a fact of public life, where the governing principle is less "innocent until proven guilty" than "innocent unless acting guilty."

This is not a partisan principle. It cut against Bill Clinton when Republicans frothed after his documents during Whitewater, and his claims of executive privilege gave his defense a shady cast; and it cut against Richard Nixon, whose epic coverup set a still unequaled benchmark for executive hubris.

The American people now have decades of experience in judging claims of executive privilege, and they have a pretty good handle on when such claims make sense and when they're transparently self-serving. If Dick Cheney were refusing to turn over documents to Congress because doing so would endanger the war on terrorism, put American lives at risk or otherwise imperil national security, the nation would be right behind him. But he's not: He's saying that the voting public, through its representatives in Congress, does not need to know and should not be able to know who from Enron met with the energy task force and what those Enron representatives asked for.

Enron currently tops the list of "corporations most likely to have won shady favors from politicians by handing them wads of cash." So Congress's request, far from endangering any vital government business, actually seems like it might help expedite that business. Assuming, of course, you believe that getting to the bottom of the Enron affair is the government's business.

Why is Cheney stonewalling? There are only a few possible answers.

(1) Ken Lay passed Cheney a big fat manila envelope full of unmarked bills at one of those meetings. High crimes are being covered up! This is extremely unlikely, and the fact that the possibility even enters the conversation is the fault of the administration's ill-considered coverup strategy.

(2) Enron officials simply provided Cheney with a few harmless forecasts of future demand for energy, then said to the vice president, "Do what's best for the country, sir" and went home. This, too, seems unlikely -- but if it were the real story, surely the administration could simply tell the truth and save its ammunition for a fight that matters.

(3) Enron officials made a variety of suggestions about how the government should shape its energy policy, and some or all of these suggestions made their way into Cheney's final recommendations. Now that Enron has become synonymous with corporate malfeasance, Cheney and company don't want to look like they were doing any favors for their friends from Texas; even if there's no evidence of outright illegal behavior, such collusion would carry a foul odor.

This certainly seems the most likely explanation for Cheney's behavior. Yet the vice president's stonewalling began when the Enron scandal was a mere cloud-wisp on the financial-news horizon. It may well be that Cheney's refusal to cooperate with Congress lacks any well-considered rationale whatsoever and is rather the byproduct of a kind of habitual executive mind-set: "I'm an Important Leader. Dammit, I need to be able to have conversations with other Important Leaders without worrying about the rabble!"

This stance is thoroughly in keeping with the Bush administration's other moves to lock down executive papers from previous administrations that ought, by rights, to have become public record by now. It seems to be part of a broader campaign on the Bush team's part to get government out of the public-disclosure business and back in the shadows where, apparently, it belongs. Cheney, in fact, is packaging his executive-privilege claim with a lament for his predecessors' pusillanimity on the all-important issue of executive records confidentiality: "We are weaker today as an institution because of the unwise compromises that have been made over the last 30 to 35 years," he said.

The next time Cheney ventures out of his bunker into the TV lights, someone should ask him what he meant. Was the eventual revelation of the outrages of Watergate an "unwise compromise"? Should Ronald Reagan and his henchmen in Iran-Contra have taken an even harder line on refusing to tell the public where exactly its guns and dollars had been channeled? Should Bill Clinton have taken an even tougher position against Cheney's Republican allies in Congress as they bayed for his blood and his wife's law firm's billing records?

The vice president's challenger is David M. Walker, who as head of the General Accounting Office is threatening to take Cheney to court if he does not turn over the energy task force records. As it turns out, Walker -- a former Labor Department official in the Reagan and first Bush administrations who was appointed to the post of U.S. comptroller by Clinton in 1998 -- came to his government gig from none other than the accounting firm of Arthur Andersen, which is currently facing its own tidal wave of troubles from its involvement in the Enron coverup. If Cheney is tone-deaf to the echoes of Enron that wash over his desperate executive-privilege ploy, Walker must be hearing them loud and clear.

Corporate executives are supposed to be accountable to their shareholders. But sometimes they become convinced of their own infallibility. Or they set out to line their own pockets. Or they just get comfortable with lying. When this happens, typically, they eventually get caught and punished by the marketplace. Politicians are supposed to be accountable to the public, too -- voters are their shareholders. But sometimes they get it into their heads that they're above such nonsense, or they know better, or the things they want to do are too important to reveal to outsiders. When this happens, typically, they receive their comeuppance in the next election.