What we won't hear from the president

The real state of the union: Deficits, debt and an endangered Social Security program. 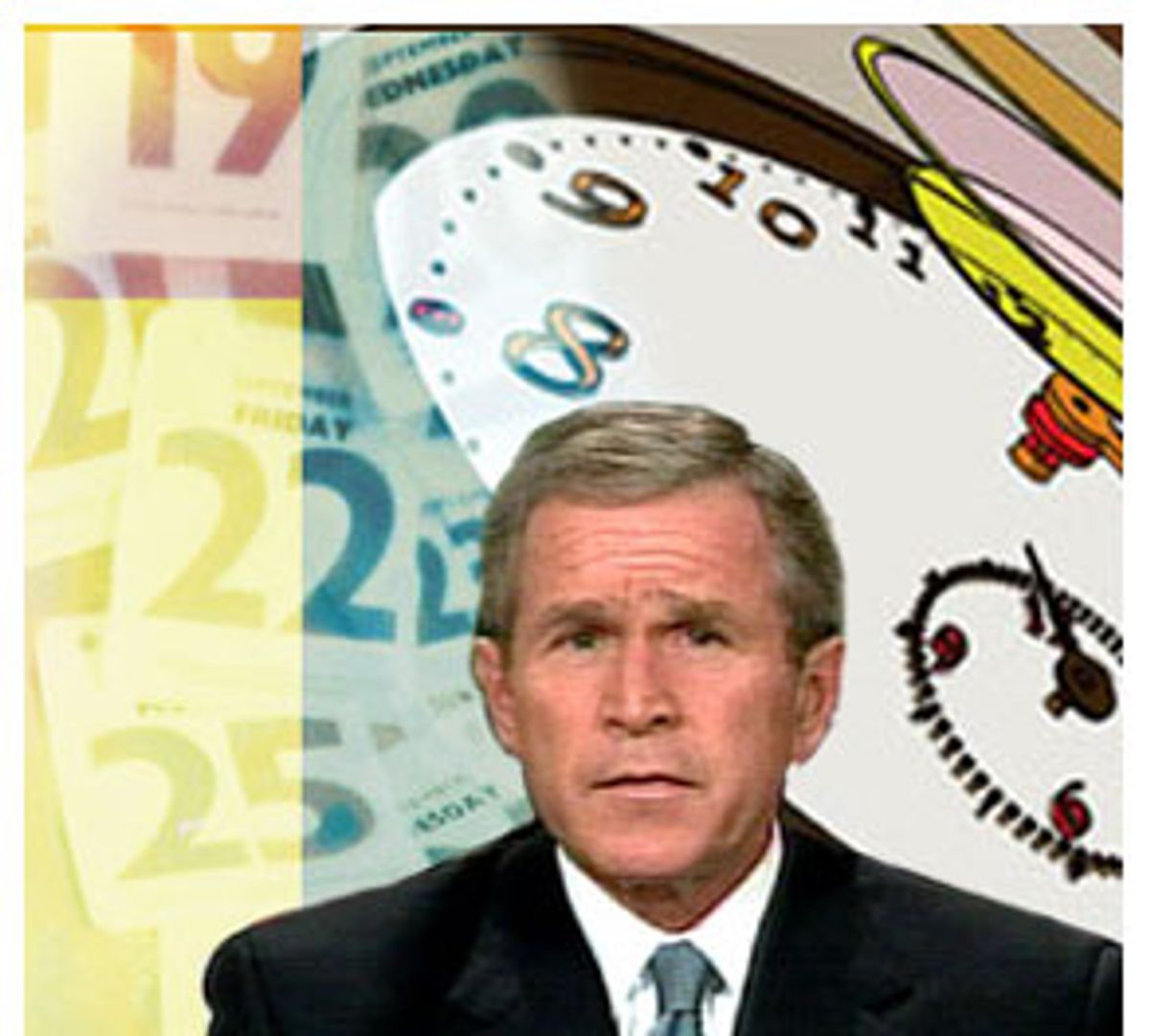 With the new president of Afghanistan gazing down from the Capitol gallery, George W. Bush will use his State of the Union address tonight to inaugurate his party's "wartime" political campaign. (Lacking the head of Osama bin Laden, the White House chose Hamid Karzai as the best available prop.)

Unsurprisingly, the president plans to follow the script written by senior political advisor Karl Rove -- who told the Republican National Committee recently that they can win next November's midterm electio n by claiming superiority over Democrats on questions of national defense and homeland security. According to several recent polls, the cynical Rove may be proved right.

What would Bush tell Congress, however, in the absence of the "war against terr orism"? After 12 months of the second Bush administration, what is the true state of the union?

Not so swell, as the president won't be eager to admit. Several of the most significant promises he made less than a year ago are now "inoperative," as h is father's mentor Nixon might have said. Red ink is rising on the nation's ledger, along with unemployment, homelessness and other indicators of social distress.

Candor would require Bush to admit that the record surpluses he inherited from Bill Clinton are gone. A substantial part of the increasing deficits is the result of squandering the Treasury on the wealthy few who paid for the Bush campaign. The result has been the opposite of what he promised last March, when he urged passage of his tax bill.

Back then, he reassured doubters that "we can proceed with tax relief without fear of budget deficits, even if the economy softens." Bush knew better even then, as his own Treasury secretary suggested privately when he referred to the surplus pr ojections as "bullshit." But those same projections were used to justify the Bush tax cuts. Now Bush's budget director estimates that this year's deficit will exceed $100 billion. And the Congressional Budget Office warns that the estimated 10-year surplus has fallen from $5.6 trillion to $1.6 trillion, the largest decline in a single year in American history.

If Bush told the truth about those swelling deficits, he might also have to mention that he has abandoned all hope of paying down the national debt. Last February, he said that his tax cut plan wouldn't prevent the government from "reducing our national debt and funding important priorities." Those priorities used to include a prescription drug program for Medicare patients.

But last month the White House asked for authority to increase the national debt ceiling by $800 billion, and that prescription drug plan is just a fading memory. So much for those optimistic predictions that the national debt would be almost completely paid off within the coming decade. And so much for the idea that those vanishing surpluses can protect Social Security benefits for the baby boomers.

Last spring, Bush publicly vowed that "payroll taxes are only going to be spent on one thing, and that's Social Se curity ... [and] the Congress won't be using the payroll taxes for other programs. Lockbox, I think, is the terminology they like to use up here." That pledge, which sounds as if it were lifted from an old speech by Al Gore, was defunct within a few month s after Bush uttered it.

His minions commenced their raid on the Social Security trust fund last summer, lifting nearly $34 billion from the broken lockbox before the end of October. They will soon be back for a lot more, according to the nonpartisa n Congressional Budget Office, which predicts that over the next decade the trust fund will be denuded of at least $845 billion. That money will be turned over to the rich beneficiaries of the Bush tax cut, whose comfortable retirement is presumably assur ed.

That is the real state of the union after year one of Bush Two. Deficits as far into the future as anyone is willing to estimate, tax cuts that will increasingly go to the tiniest fraction at the top of the income scale, endangered Social Securi ty and Medicare, and national debt piling up instead of diminishing. Bush obviously couldn't have foreseen the terrorist attack last September or its effects on an already weak economy. But his reckless insistence on fiscal plans designed to benefit his o wn class at the expense of everyone else has made matters considerably worse.

For the moment, it is easy for Bush to conceal all that bad news behind unfurled flags and military camouflage. But the same polls that show great support for the president and his victory over the Taliban regime also reveal other attitudes that aren't so cheerful. Americans are worried about deficits and unenthusiastic about tax cuts. By this time next year, when the flush of victory has faded, this spendthrift president may have some serious explaining to do. C