A book to die for

When you're editing Saddam Hussein's new novel, removing a colon can mean the removal of your colon. 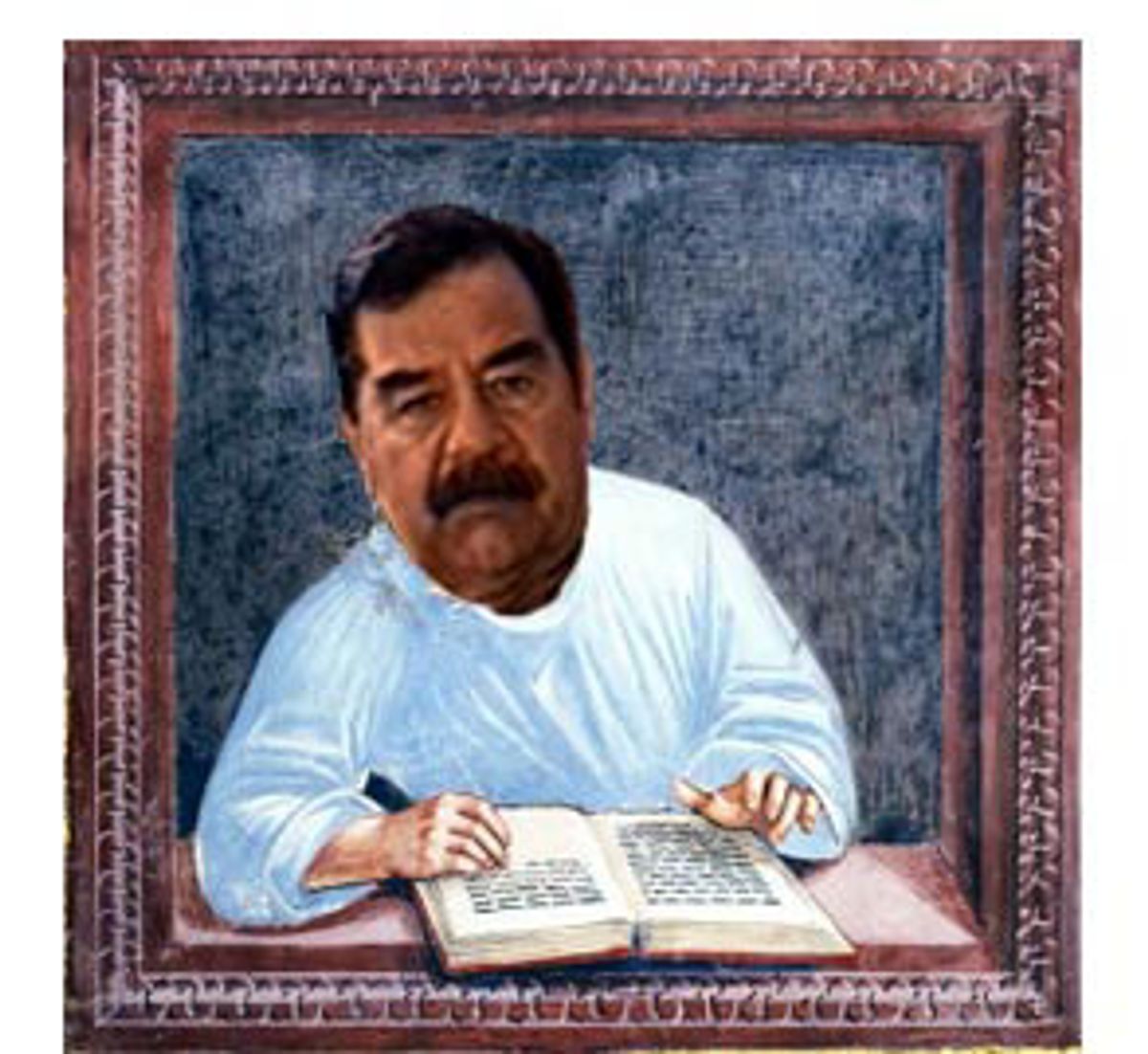 Greetings! I just received a memo from Mohammed in the fact-checking department. He has concerns about your manuscript. For instance, why does the main character keep telling everyone he meets "I'll be back" when it's clear he has no intention of doing so?

Our concerns about verisimilitude are not limited to the protagonist. Would an Iranian torturer really say: "I'm going to get medieval on your ass?" Please keep in mind that these are not suggestions in the literal sense of the word, but merely recommendations that you can take or leave as you see fit. But of course you already know that.

I can only assume that you did not receive the e-mail I sent late last week asking for you to delete these items. Did you or did you not receive this directive?

How are you coming along in getting "The Fortified Castle" reviewed by the Times Literary Supplement? As many of my enemies reside in that soggy hotbed of infidelism, this is very important to me.

In the future, I expect you will be more conscientious when it comes to -- and I'm choosing my words very carefully here -- "executing" my demands.

Exultantly,
He Who Confronts
BTW, would you please forward me Mohammed's e-mail address? I would like to personally thank him for his diligence. Great minds thinking alike and all that.
--SH

From: rafiz_chabab@ishtarpress.ir
To: baghdadboss@hotmail.com
Subject: A Thousand and One Apologies!

Yes, I have your e-mail right here! I don't know how I could have missed it. Please know that I will never let such a thing happen again.

Still no word from the TLS, but I have some excellent news to report. "The Fortified Castle" will be featured in the New York Times Book Review! This is quite a coup!

Now the bad news. I have before me a memo from the P.R. department. They are afraid that naming the protagonist's rival "Bill Bush" may not go over well with the target demographic (the poor, the orphaned and the oppressed) who may not be up-to-snuff on their current events. (See the attached ratings report from CNN.) They also fear that Bill Bush's midget stepsisters, Irania and Kuwaity, are, allegorically speaking, a bit too on the nose. As they serve no useful function in the novel, they suggest these characters be purged from the manuscript.

It goes without saying these are most definitely NOT my ideas! Nor am I responsible for hiring the people who came up with them. You know how those dinar counters are!

Also, I forwarded your e-mail to Mohammed but it came back undeliverable. I went to his desk to see him in person but his supervisor informed me he has been out of the office all week. In fact, everyone in the office named Mohammed seems to have taken ill! Weird coincidence, no?

Humbly, apologetically, and definitely on your side,
Rafiz

I am very annoyed with you.

I most certainly do not consider the New York Times Book Review a coup. A coup is a stinger missile up the elevator shaft!

In my lifetime I've been compared to Mao Tse-tung, Tito and Castro. Now I intend for my exalted name to appear alongside Collins, Sheldon and Fabio, and I will brook no intrusion from imbeciles.

As you have undoubtedly noticed, I have taken the liberty of "purging" the P.R. staff and replacing them with the propaganda unit of my Not-So-Secret Police. They will handle all the marketing and promotions efforts and take over the organization of my book tour. This will include mass rallies, effigy burnings -- the works.

From this point forward, your duty is to oversee production and printing. Do not disappoint me, Rafiz. Do not think of the gruesome death that awaits you should you fail me again. Think of the people of Iraq. They need this book, Rafiz. They need you to bring them this book as swiftly as possible.

From: rafiz_chabab@ishtarpress.ir
To: baghdadboss@hotmail.com
Subject: I hope you're in a good mood when you read this ...

The Greatest Guy a Nation Could Ever Have,

You really know your stuff! Granted, you probably hear that all the time, but those new P.R. guys are really, really great. Their technology is amazing and the uniforms really do make a difference. Excellent move on your part, Your Excellency.

I hate to be the bearer of bad news again (remember, I'm just the messenger), but Oprah's Book Club people have been in touch and it doesn't look like "The Fortified Castle" is going to make the cut. Something about human rights issues, female genital mutilation. Do you have any idea what they're talking about?

Anyway, did I mention I was going on vacation? I'm taking the family to the Gulf for a few weeks. The salt air will do us a world of good, I think. I'll send you a postcard!

Rejected by Oprah! When the Ruler of the Cradle of Civilization writes "Chick Fic" he expects recognition, rewards and major network exposure!

No matter. Though she knows it not, she has just signed the death warrant of a so-called writer in her book club. The Ayatollah had his Salman Rushdie; I have my Wally Lamb.

Sometimes I'm so fiendish I frighten myself. Enjoy your "vacation."

I have to say what an honor it is to be e-mailing you! When I started my internship at Ishtar Press six weeks ago, I never thought I'd move up so quickly. Senior Editor! That so blows my mind!

Although I'm fairly new here, I learned a lot during my two years at San Fernando School of Journalism (fully accredited!). I'm soooo eager to discuss your ideas for a trilogy!

Jim Ruland is a writer living in Los Angeles