A couple with a dazzling and fiery toddler ask if they can expect familial harmony. 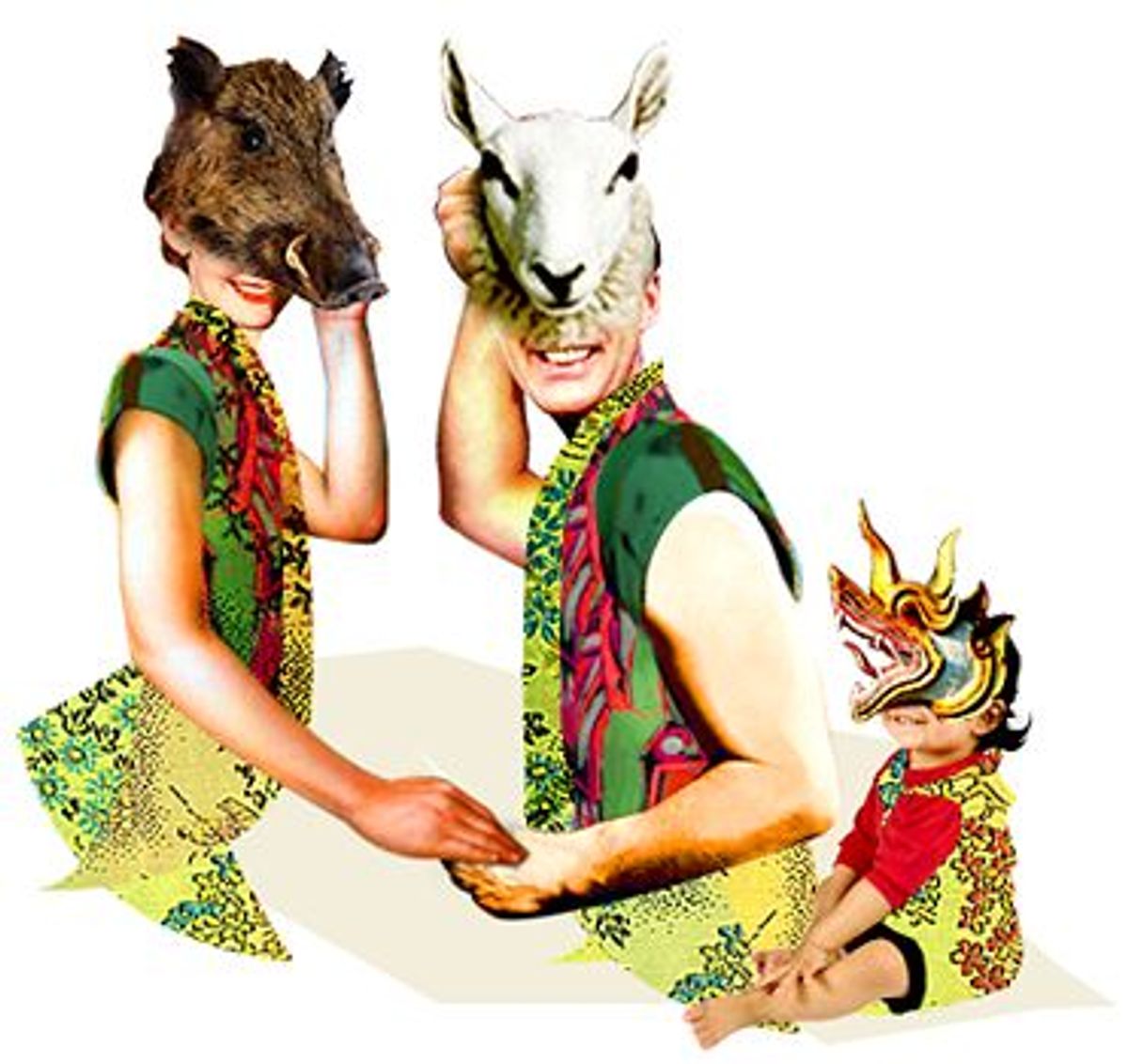 So. You find someone, you fall in love, you get married, you have a child. Do you then live happily ever after? Well ... not necessarily. Have you considered the question of whether the two of you will be compatible with your child? In places where astrology is taken very seriously -- India and many parts of Asia, for example -- prospective parents often plan ahead and consult experts to choose a birth year, even a birth month, for their child, to increase the chances that the child will mix well with them and be a blessing, not a blight, on the family escutcheon.

I know of two parents, an Aquarius Rooster and a Pisces Rat, whose struggle to get along with their Aries Sheep daughter has been lifelong. They are meticulous, conscientious, hard-working people, much concerned with duty and reputation; their daughter is a creative, free-thinking, self-involved, criticism-averse whirlwind of energy, who finds her parents' relentless chiding and rule-dispensing hurtful and suffocating. The three of them love each other dearly, despite decades of tearful scenes, but any pundit would have told Rooster and Rat parents-to-be that if they wanted a smooth family dynamic (considering the temperaments of their own melds), they would have done well to avoid a Sheep year, to say nothing of Aries.

Of course, once a child is born, with or without benefit of pundits, there can be no second-guessing; and in any event, most Western parents know nothing of the wisdom of the lunar and solar calendars. What can parents do when their child's temperament differs wildly from their own? The first thing to do is to remove the element of surprise -- investigate your child's sign meld; know your progeny. Then you can begin to anticipate areas of difficulty and adjust to accommodate the differences that are bound to appear.

This week Theresa, a Libra Boar, and Dave, a Libra Sheep, have written in to ask about their toddler daughter, Mariel, an Aries Dragon whose feisty personality has thrown them both for a loop. Marisa writes, "My husband and I are both Libras. Our daughter seems to be very unlike us. Already, she seems very much an Aries." Theresa would like to know what "the intersection of that with our Chinese lunar signs portends, and asks, "Should we expect familial harmony or not?"

"Should we expect familial harmony or not?" It's tempting to laugh, but not unkindly. The good news is that Theresa and Dave have very well-matched sign melds and are highly suited to one another. As a Boar, Theresa is good-hearted, well meaning, home-loving, sensual and capable. As a Metal Boar, she is capable of working harder than other Boar varieties, though like all Boars, she will know how to avoid over-exerting herself, and her Rabbit hour birth will give her the intuition to know what she can leave undone.

Theresa is not a quitter; she will solve problems, and her Rabbit birth hour, allied with Boar, means she'll omit no detail in tackling her work and responsibilities. She is the embodiment of "family values" and will be selfish on her family's behalf -- protecting their joint interests. Boars and Sheep make one of the strongest pairs in the calendar; they communicate, they intuit, they work best when they are teamed, they help each other grow.

Dave's Sheep sign makes him charming and beauty-loving, and his Wood year makes him a particularly nurturing, kind, and lucky sheep. (Also, he will probably not be a workaholic.) The fact that both Theresa and Dave are Libras means they will be skilled at sharing their thoughts and worries with each other. When they do have troubles, Dave is more likely to be the one to complain or get upset than Marisa; Sheep bleat a bit, and take things too personally. But Theresa will know how to soothe him. In short, they are calm, amusing, loving, creative, familial, fair-minded and friendly without being wildly gregarious. Their life goal is probably comfort, not standing out in a splashy way.

Enter the Aries Dragon. Mariel is born in the strong character year par excellence -- the year of the Dragon. The year 2000 -- year of the Metal Dragon -- produced an Asian baby boom in America, because so many Asians want their babies to be born under this auspicious sign, which augurs wealth, power, charisma and luck (usually good luck).

Metal Dragons are loaded with vitality and a sense of purpose from day one; you will find Mariel knows what she wants to do, and if she expresses interest in some activity, leap to get her involved in it. This sign gets angry if it's understimulated. She will be very social but likes to play with her equals or "betters" (i.e., older children, while she's young) and will enjoy work as much as play (get her involved in sports; it will be a good outlet for her energy). She will want either to lead others or to serve some strong leader. She will be dear to children who look up to her or who are younger, but she may have a tendency to pick fights with children who cross her in some way or whom she considers a "threat" to her standing.

In general, from the earliest days, she needs to be gently encouraged to feel good about her own achievements but not to be overcompetitive with others. The Dragon and Aries signs correspond to each other, with only a few differences. The Aries is vivacious and glittering with ideas but secretly self-doubting; the Dragon has total confidence in himself but is less inventive than the Aries and seeks a tried-and-true means to distinction. The blending of this pair makes for a dazzling creature. And Mariel's Horse birth hour is a funky wild card that makes her magically creative and hard-working but easily bored and capricious. This girl could go very far -- or explode in a puff of fireworks. She will be dramatic, whatever happens.

How will the parents deal with this ball of fire? Mariel will be good at wheedling her father, who will be awed by her -- Dragons are good at working compliant Sheep. However, Dave will probably draw back, out of caution, and Mariel will be closer to her Boar mother. Boars can't hide their admiration of the miraculous Dragon, and nothing makes a Dragon/Aries love you like showing them admiration and devotion.

The Dragon daughter will be full of inspirations and schemes, and although it would be impossible to humor all of them, try to satisfy many of them; her ideas will be good, and one of them may end up leaving you well off in your old age! Try not to criticize her much; the Aries takes criticism very personally and really is undone by it. If she's behaving badly, guide her into other activities; chances are she's unfulfilled if she's acting up. The Dragon doesn't care as much as the Aries about pleasing others but believes in duty and family loyalty and will struggle to deserve your love and respect. This is a very strong and gifted meld, but its personality is a little outsize for Boar-Sheep Libra parents!

Theresa and Dave can be encouraged, though, that they are ideally suited to support one another; and that their daughter's sign meld predisposes her to admire them, love them, and seek their praise through achievement. She may exhaust you, but she will likely give you great rewards in the end and make you proud. One idea, though; send her to her grandparents one week a year and give yourselves a vacation -- you'll need it.