Yes, the Patriots can beat the Rams!

The problem is, they won't. 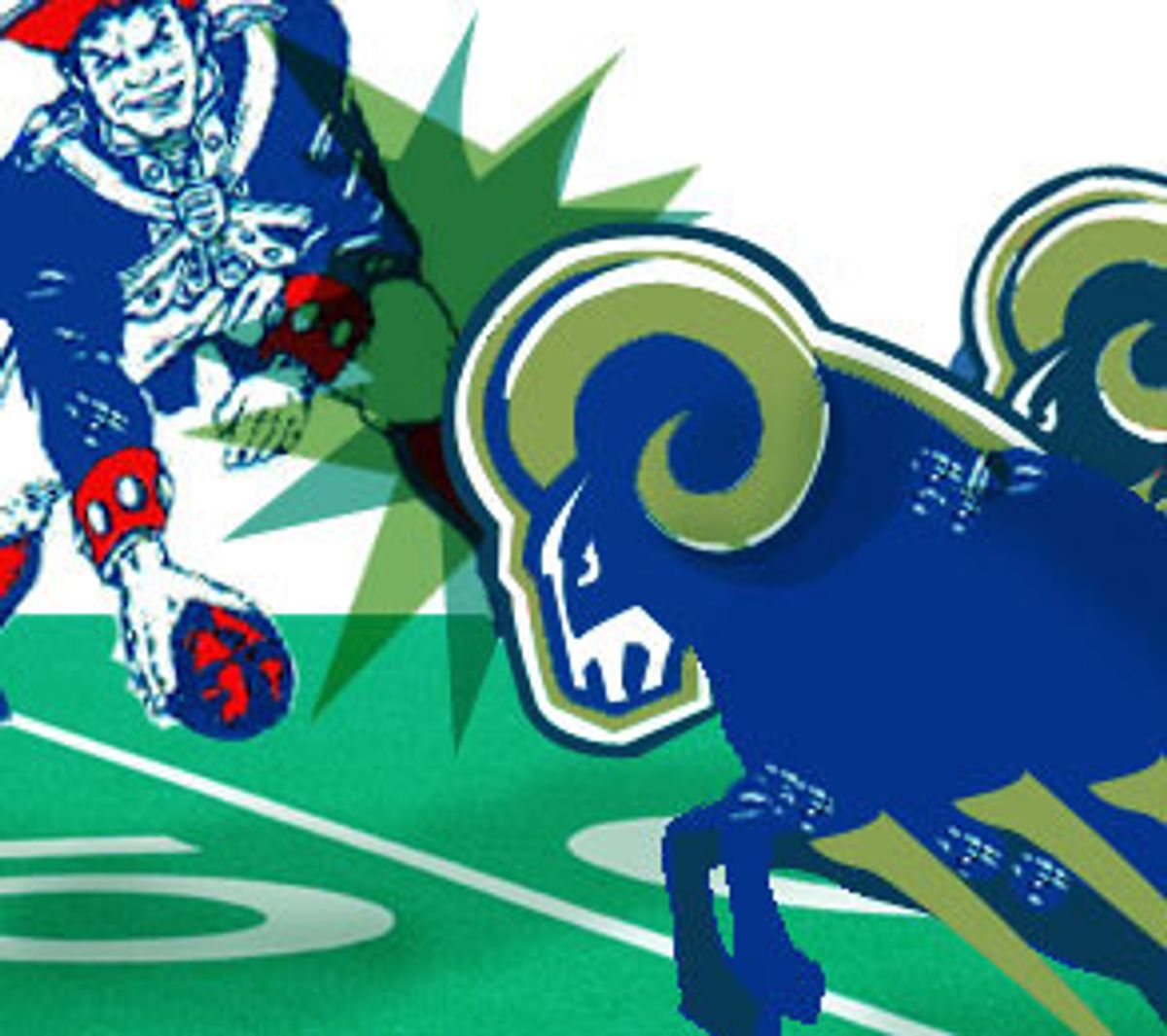 The answer, of course, is yes. The answer to the initial question was yes also. In fact, every team knows exactly how to beat the Rams, and they tend to make no secret of it. Almost every week, the Rams' next opponent more or less says, "Can we beat the Rams? Sure. You just have to hit 'em hard, put pressure on the quarterback, get 'em out of their rhythm. Once you do that, you've got 'em beat."

Leading up to the game, the Giants had used the F word, which in St. Louis is "finesse." See, teams use that word to describe the Rams because the Rams are built for speed, not power. Which is to say that the Rams are a bunch of flaming homosexuals. Well, not really. But, you know, sort of. And the Rams say, We are not a finesse team. We are in fact a rough, gritty, hard-hitting group of butch boys, and even though our receivers run very fast, they are all real men in every way if you know what I mean.

Well, not really. But, you know, sort of.

Anyway, the Rams actually were beaten this year, twice. Both times were home games against middle-of-the-pack teams. And both times the team responsible was the Rams. After they won their first six games, they lost to New Orleans 34-31, turning the ball over eight times (eight!), including four times in a 25-0 train wreck of a third quarter that may have been the worst 15 minutes of football ever played by a halfway decent professional team. After two more wins, they turned the ball over five times and had a punt blocked in losing to Tampa Bay 24-17.

Neither team that beat the Rams did much on offense. The Saints managed only 15 first downs and were outgained 474 yards to 320. The Buccaneers had 18 first downs and only 264 yards of offense.

Which makes all of this week's blather about the Patriots' quarterback controversy all the more pointless. (And isn't it nice to only have one week, not two, for such pointlessness? Can we keep that? Huh? Can we?) Would coach Bill Belichick choose Tom Brady or Drew Bledsoe? Bledsoe was the veteran star who'd been injured early in the year. Brady was the callow second-year man who'd taken over for him, turned the team around and led it all the way to the AFC Championship Game, where he got hurt ... and Bledsoe came to the rescue, throwing for a touchdown and helping the Patriots hold off the favored Pittsburgh Steelers. The plot thickens!

And the answer was: Who cares!

OK, the answer was Brady, but it really doesn't matter. With either man at the wheel, the Patriots have a decent, ball-control-style offense (sixth in the league in scoring, which is impressive considering they average only about 300 yards a game on offense) centered around the running of solid but unspectacular Antowain Smith and the pass catching of their best player, Troy Brown, who also runs back kicks. He ran a punt back for a touchdown against Pittsburgh. That'll be good enough to score some points, though not a tremendous number, against the Rams' defense, which is good, and by the way can we stop saying it's underrated please?

How long can you talk about something being underrated before it ceases to be underrated? We know, the Rams defense was terrible last year. We know, it's much better this year, third best in the league in yards allowed, seventh in the league in scoring defense, which seems a little more important to me. But either way: good defense. Hey, here's a shot of defensive coordinator Lovie Smith on the sidelines. Heck of a job, Lovie. We've been hearing since September that this isn't the 2000 Rams defense anymore. They're underrated, folks. Watch out, they're actually really good. You know what? I think they might actually be overrated at this point.

So the question for the Patriots, given that they're going to score maybe a couple of touchdowns and a field goal or so on special teams and/or against the Rams' underrated but good defense, is: Can their own defense stop the Rams' annoyingly monikered "Greatest Show on Turf" offense?

And the answer is? Well, that's the rub, isn't it. Let's face it, the answer's probably no. But if anybody's going to beat the Rams in that way that everybody knows you can beat them, the Patriots aren't a bad bet, because the Patriots have a pretty good defense (sixth in the league in scoring defense at 17 points a game, a tick ahead of the Rams, although they give up a lot more yards) and they're coached by the league's reigning defensive genius, Belichick, who despite his genius status tried to beat the Rams earlier this year by dropping seven guys into coverage, which pretty much never works against the Rams, who won that game 24-17 in Foxboro. Both teams are undefeated since then, for what that's worth.

But we'll figure that Belichick, being a genius and all, will have learned his lesson, and will throw all kinds of different looks and schemes at Warner and company, and it just might work to a certain extent. The Pats, after all, got past the Steelers mostly by beating on them until they bled from the ears, a phrase I promise I'm almost ready to stop using, and by scoring two touchdowns on special teams, where St. Louis is shaky.

It might work, but it probably won't, because the Rams are coached by the league's reigning offensive genius, Mike Martz -- who despite his genius status not only had the unfathomably valuable Warner in the game during the waning moments of the Rams' long-since-sealed victory in the season finale, but had him blocking on a trick play -- and because Warner has Isaac Bruce to throw to, and Faulk, and Torry Holt, and Az-Zahir Hakim, and Ricky Proehl, and Ernie Conwell, and if none of that is working, or if the Rams have a little lead, he can turn around and hand off to Faulk, who in addition to being one of the league's most dangerous receivers is probably its best runner.

The prediction here is that the Rams' speed -- not that there's anything wrong with that -- will be too much for the Patriots, not least because of the Patriots' uniforms.

You heard me. The uniforms. Both of this year's Super Bowl teams play in outfits that are not nearly as cool as their previous ones. In the Rams' case, the design is pretty much the same as it's been for decades, but two years ago they toned down their vibrant yellow to a more subdued dull gold. The Patriots did far greater damage, trading in their patriotic red, white and blue togs for a decidedly less stirring red, silver and blue color scheme. Does anybody give three cheers for the red, silver and blue? They also ditched their old minuteman hiking the ball logo for something that makes them look like the official team of the U.S. Postal Service.

And if you've ever stood in line at a post office you know one thing about the U.S. Postal Service: Speed is not a strong suit.