As a lesbian mother, I've been pushed into the shadows by the law. Will the pediatricians' humane report finally make me a legal parent? 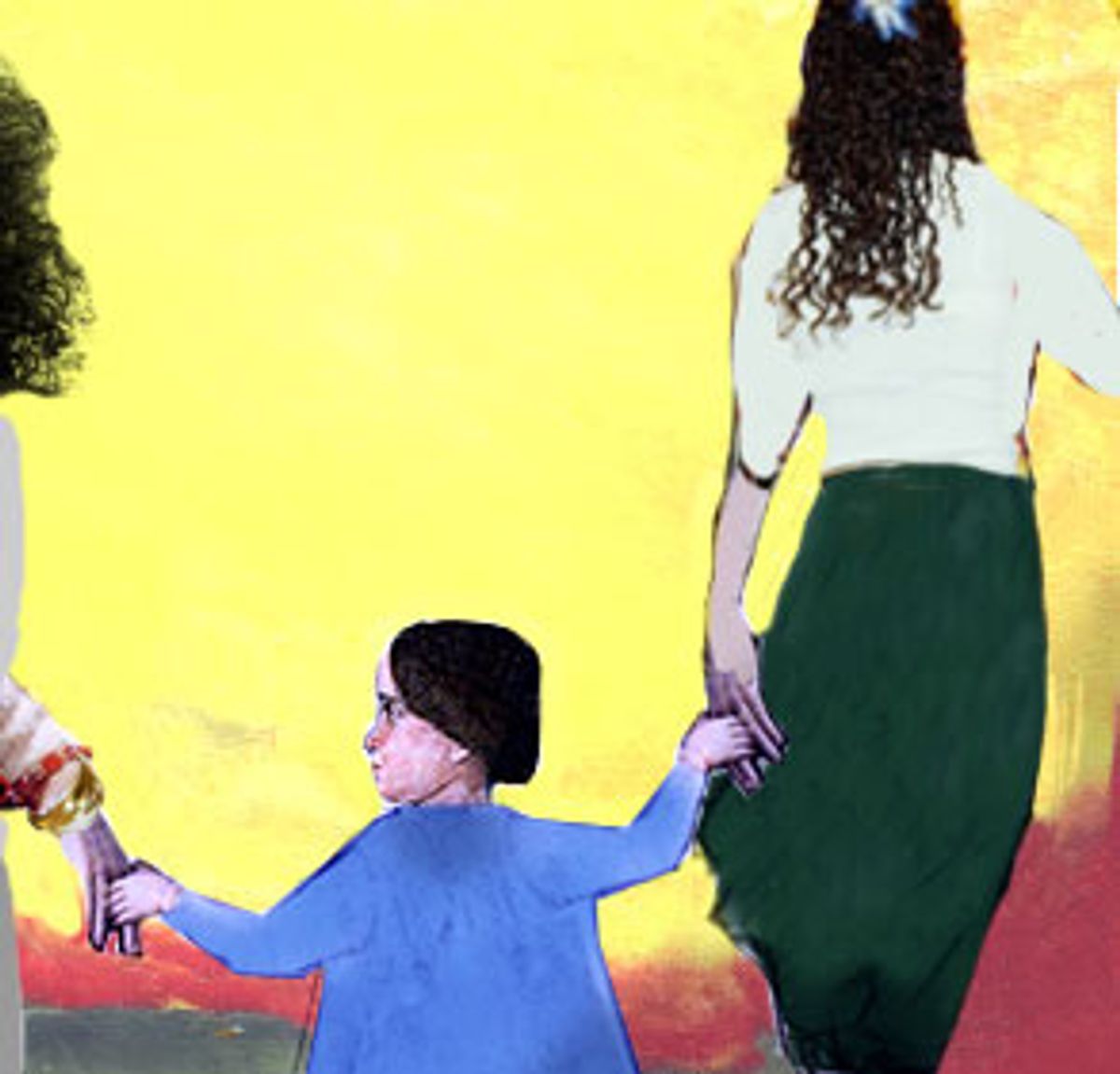 Rennie and I were at a playground the other day. It's our favorite because we can ride our bikes there, and it's near a great place for ice cream, and its climbing tree doesn't drizzle us with itchy sap. On this particular day, a 4-year-old boy wanted to play house.

"I'm here with my dad," he said, after setting down a million rules and much pre-approved dialogue for the game. "Are you here with your dad?"

"Two moms is too many. You're supposed to have a mom and a dad."

"Well, families come all different," said Rennie. I've heard her say it before. "And mine is just the kind with two moms."

On Monday, the kind of family with two moms, as well as the kind with two dads, inched closer to legitimacy -- and legality -- when the American Academy of Pediatrics announced that "children who are born to or adopted by one member of a same-sex couple deserve the security of two legally recognized parents."

The decision came after the academy's review of two decades of studies, the majority of which indicated that children of gay and lesbian parents are as well adjusted -- psychologically and socially -- as the children of heterosexual parents. Legalized second-parent adoption, concluded the organization of some 55,000 pediatricians, is in the best interest of children, all of whom need equal protection and benefits under law, regardless of the sexual orientation of their parents.

Rennie was conceived by alternative insemination. (Her name, like others in the story, has been changed to preserve her privacy.) She came from Shelley's body, born during a hot stretch of summer when the nighttime was filled with the buzzing of insomniac cicadas and the daytime was filled with insistent chain saws ripping down a neighbor's lilacs. At 5 and a half, she has added a billion buzzing layers to our lives: She is a strong, fast, extroverted girl interested in truth and justice, planning next year's Halloween costume, drawing, climbing and telling stories. She has determined that the new kitten's favorite song is "La Bamba," and she plays it over and over for him on the living room stereo.

Rennie has remodeled our hearts, and we're finding storage capacities in them that we didn't know we had. If she falls down, we pick her up. Some days it's just that simple.

Yet we knew. We knew the hard, solid, slowly yielding facts. Some states ban second-parent adoptions. Only a handful recognize two-mom households as families, offering only some of the same invisible family supports that married heterosexual families enjoy. Our state is not one of them. So despite many years of sharing responsibility and joy, a checking account and nicks and scrapes, Shelley and I still are not able to commit legally to one another; and I cannot legally commit to Rennie.

In the eyes of the law and legislature, I'm nothing more than a very good friend to Shelley and our daughter. I count on the progressive politics of my city when I sign on the "parent's signature" line on forms at the pediatrician, forms at my daughter's public school, forms at the public library. And I dread the day my signature isn't enough: consenting to emergency health care, for instance. I dread the day when whoever's in charge of all those forms insists on waiting for the "real mom." I dread what that might cost.

We knew about the soft, people-y difficulties. We knew that I'd need to gently assert myself as a parent in the world, to find employers who will respect, without question, my legally unrecognized role as a mom. To gently remind a school nurse that Rennie's got two moms. To honor our family, regardless of whoever else does or doesn't.

And we knew that, in an odd way, ours would be viewed as a challenge to other forms of family, because doing something differently has inherent uppity qualities. We knew that no matter how mellow our parenting, no matter that we weren't doing this to prove any points or to pointedly critique traditional family structures, we couldn't avoid our roles as leaders of a revolution. It's funny to think of that now, when we spend the bulk of our "revolutionary moments" saying things like, "I think you need a Kleenex. Now."

But there we are. We're following hauntingly traditional desires -- a child, a good elementary school, maybe a Calphalon pot or two. We're supporting school board candidates, turning up regularly to donate blood. Yet we're simultaneously fighting the system, simply because there's an unusual number of ovaries among Rennie's parents.

This is what we tell people who ask: Our household is like millions of households with a 5-and-a-half-year-old and two working parents. Time is usually in short supply. We have to cook nutritious meals celebrating green cruciferous things and trace minerals. We have to launder everybody's Levis, scrub the bathroom with some regularity. Our daughter has been skipping violin practice. She could really use a bath. After a unit on Scandinavia at school, she wants to find out more about Norway, which means we need to find out more about Norway. Each day starts early and ends late, and things still spill over onto the next day's list.

And this is the "what else" about our family: We're lesbian parents, which is simultaneously a big thing and a small thing. During these days that whip by like a thundering herd of kindergartners, having two moms seems like a small thing. We're occupied by the questions that dog all the families we know: How do we cover all these bases? In the middle of this flurry of multivitamins and school responsibilities and finishing our projects at work, are we teaching our daughter the right things? Is ours a healthy balance of responsibility and playfulness? Family focus and self-focus? And where is that other mitten?

And we're occupied by questions those other families aren't answering, or maybe don't need to answer quite as often, quite as directly, quite as publicly. Does it make my family stronger, or only vaguely tired, to go through our days understanding our legal uncertainty? What does it mean that Rennie lacks some of the security that other kids can count on -- access to my health care plan, or Social Security survivor benefits, or both of our continued presences (and financial support) should the relationship between Shelley and me end?

What does it mean that, to people who don't know us, we are not a family? What does it mean that recognizing and respecting us as a family is optional even for people who do know us, and know us well -- my dad, for instance? Questions like these are hard to bend my brain around. They're made harder still because they only become immediate and tangible in worst-case scenarios -- Shelley's injury or death, injury to Rennie, the end of our relationship. Who wants to think about those?

These questions also necessitate in me a low-level need to constantly, quietly and privately justify our decision to form a family in the first place. There is a purposefulness in our decision to have a child: We couldn't get pregnant accidentally, couldn't just lay aside the birth control, open the windows and let fate blow in. Instead, our conception involved on-purpose phone calls, seeking out nurse practitioners, fertility doctors, reliable sources of sperm. These are the thoughts that occupied me on the way there: Is this really OK? Am I made of strong enough material to be a parent at all, let alone a lesbian parent? What am I asking of my child, bringing her into a family she'll have to explain, patiently, more than once?

Our decision to have a child did not come lightly. And yet it came easily. Shelley and I had both envisioned ourselves as parents, and then as parents together. We'd arranged for some practice -- taking care of kids, babies and school-age people three days a week to make sure we were realistic about this plan. In the context of a kitchen full of domino-stacking kids and babies getting teeth, it all made sense. We were drawn to this notion of making a family together, in this house. It seemed possible that it would only be as hard as we made it. So we approached it as gracefully as possible, reducing the task to a simple and very familiar story: We love each other. We love kids. We are ready.

And we knew, too, that a lot of people can accept the idea of "lesbian." People in our lives have -- families, employers, friends. I came out at 18, and my family and friends stewed, struggled and ultimately juggled my gayness until it became an understandable part of who I am. I am out everywhere: at work, at home, in between. (On the street, despite some well-meaning lessons in How to Walk and Dress Normal, something is clearly up, and my loping lesbian self fulfills several stereotypes at once.)

Adding "mom" to "lesbian" ups that ante. Many of the people in our lives were thrilled when we told them about Shelley's pregnancy. With others, we noticed audible pauses while they thought it over. It's probably OK to be gay, some of them ultimately said. But we're not sure it's OK to be a gay parent. We're not sure it's fair to saddle a child with that liability of having to be different from the other kids.

Kids, we said, will always be different from each other. And they notice. They notice who's too short or too bold, who's befriended the wrong kind of stuffed animal, who brings slightly bizarre lunches. Ours is a progressive and tolerant town, and we found an elementary school where diverse family structures -- single parents, queer parents, extended-family living -- are common. We talk about our family structure in a way that starts with "It just is." And for right now, that seems to be true. That seems to be enough.

Back at the park, the 4-year-old boy looks at me, at our bikes, at Rennie. He scoops up a handful of gravel, contemplates the news of two moms and says, "That's weird."

Then he pops some stones into his mouth. It makes him a little harder to understand. "Are we still playing house? I wanna be the kid."

"I wanna be the mom," says Rennie. "But, you know, you really shouldn't eat rocks."

It's a line I've said a hundred times myself.

Sometimes it's that simple. Sometimes, I know, it won't be. But for now, it's mostly a matter of keeping the rocks where they belong, and choosing a path that's as soft as we can manage.

Spoon Bennett is a pseudonym for a writer in Iowa City.