In prison, on an island, the beach is a source of treasure, faint hope and news from the outside. 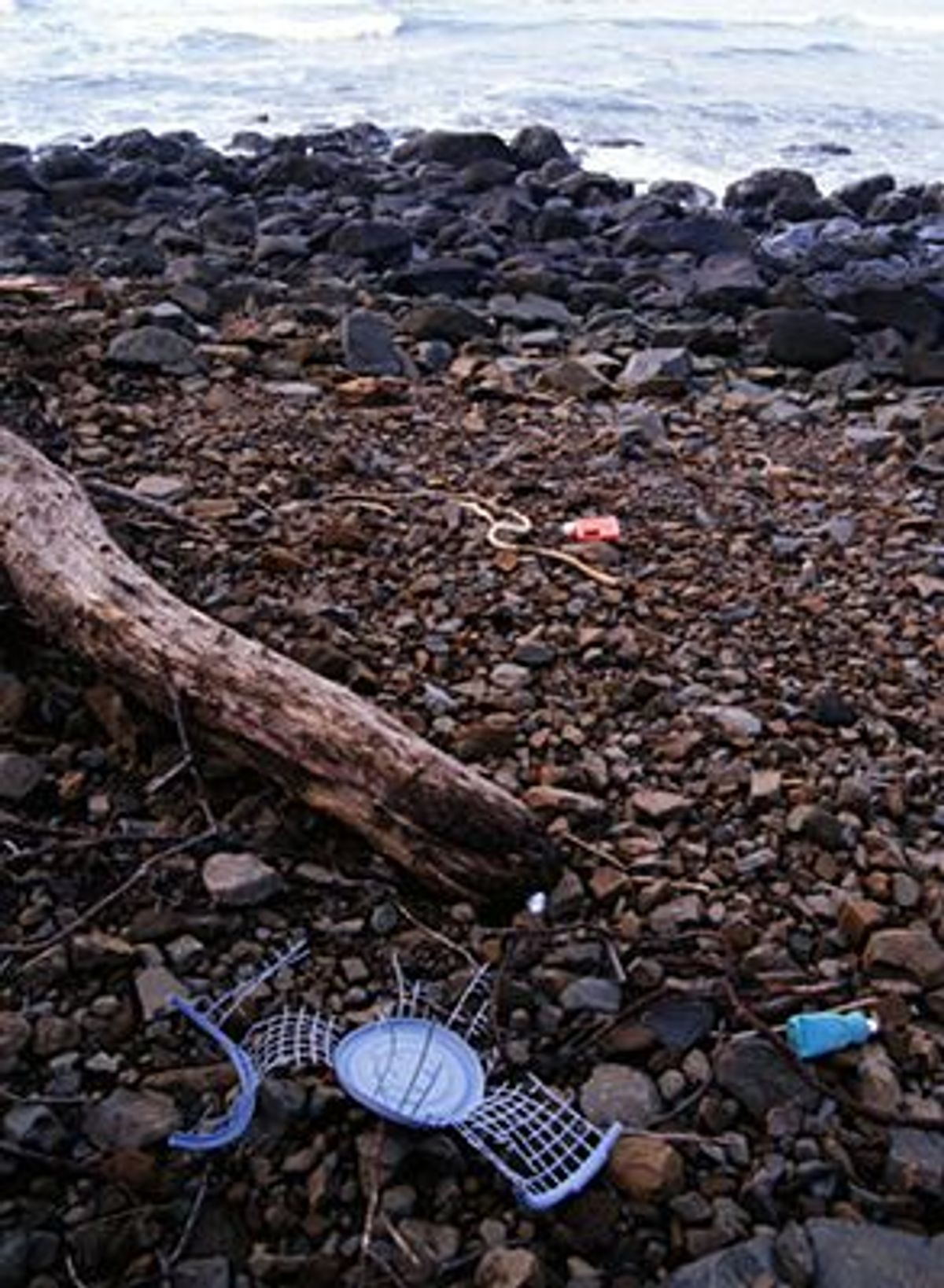 William Head Federal Penitentiary, aka Club Fed, is an 80-acre windswept rocky peninsula that juts out from the southern tip of Vancouver Island into the Straits of Juan de Fuca. It is both a penitentiary and a place of terrible beauty. At night you can see the lights of Port Angeles, Wash., 20 miles to the south; Victoria, British Columbia winks from five miles away to the northeast.

A high steel fence topped with razorwire and backed up by two gun towers closes off the land entrance to the joint, and the cold black waves of the Pacific lap the perimeter shores like hungry guard dogs.

The prison serves to keep us separate from society, cut off from the daily commerce of life. But the sea that all but surrounds us, especially in the winter storms that batter the rugged shores, also brings in messages, signs of lives being lived out there beyond our reach.

Amongst the plastic shopping bags and Javex bottles, the fishing floats and frayed pieces of dock rope, are flattened Cheerios boxes, empty packages of Hot Blue Corn Chips, a can of Turtle Wax, a baby's car seat, a child's plastic Batmobile with one wheel and the driver missing, a broken piece of plywood with the words FORBIDDEN ZONE written on it.

The detritus that washes up on these rocks sometimes fuels our prison economy. There are men who sit with their faces to the wind, hunkered down out of sight of the patrol trucks, scanning the waves for a bobbing whiskey bottle with a few dregs left, or a Ziploc baggy with a few buds of pot, still smokable. (One stone alcoholic told me about finding a half-full bottle of Bacardi rum, which he called Black Bat. He downed it on the spot in one gulp, then sobered up eventually and helped found the AA group here, which in a fit of unbridled irony was named "The Beachcomber's AA Group.")

The dope fiends have to stoop a little lower and look a little harder, combing through the bull kelp and raking their fingers through the stones to uncover the small plastic syringes which can then be sold for $20 or traded straight for a flap of heroin.

One young Cree from north of the 60th parallel fished out a wallet containing 16 American $1 bills. Functionally illiterate and unfamiliar with the look of U.S, currency, he thought he had hit a jackpot and was disappointed when his dealer did the cold math for him. Still, with the exchange rate, he had enough for a flap.

I don't drink or get high these days; my needs are small, so I beachcomb for a different reason. I walk the trails above the beaches every day and stare down at the debris amongst the logs and kelp. I watch for that half-submerged square edge, or a color or texture that is out of pocket with the natural world.

At different times, I have fished out a ripped condom package, a pair of mirrored sunglasses (one lens missing), a Reebok high-top, size 13. These things constitute my news from the outside world, my mail, posted anonymously and arriving by accident, connecting me to the lives of strangers on the free-side shores.

I conjure up the genesis of each item, its journey, its past lives, and try to envision the people it touched. I imagine a young man on a beach ripping open a red condom package with his teeth, or his girlfriend astride him, ripping it open with her teeth. Could it have been tossed out the porthole of a passing cruise ship after a gay liaison? Did a 10-year-old steal it from his parents' night table to make water balloons and impress his friends?

I wonder about the flattened package of Hot Blue Corn Chips. Was it opened and poured into a bowl at a barbecue? Or were the chips shared by two friends, eaten right out of the package, while they sat on the edge of a dock, their toes touching the water and each other?

Where was the missing Batman for the Batmobile? Who had Turtle-Waxed their Pontiac Firebird on their day off, then tossed the brown container into the bay? Had the plywood door with the one hanging hinge finally and mysteriously come to rest against the rocks in this place on purpose?

These battered and broken and waterlogged objects on the beach are the strings that tie me to the outside world. Each has its story, and it is their stories that set me free.

For a few days each year, in the fiercest storms and the highest tides, the sea will even give up messages from the past, the long forgotten artifacts of the depths. There has been a rotted plank with the encrusted plaque from an old sailing ship, the rusted remains of a cooking pot, the occasional shard of pottery with faded Chinese characters.

At the turn of the last century, immigrant ships from Europe and Asia anchored here in the big bay to unload smallpox victims, or those with leprosy. This place was a quarantine station long before it became another kind of prison.

There is a graveyard on the southern side, the final resting place of those travelers who never quite made the last leg of their journey to the New World. Their graves are marked with a name, a date and the name of the ship they sailed in on -- like the one I often go to sit by: Liza Gentel, 1901-1911, Empress of Russia.

There are also prisoners here, who, like Papillon on Devil's Island, sit and contemplate the tides, not for what they bring in, but for how fast and far they will carry something out. It is common knowledge how treacherously cold the waters are that surround us. An average-sized man will last only eight minutes before the rate of body-heat loss accelerates to the point of hypothermia, followed by loss of limb function, then death.

Men have greased their bodies from head to toe with lard stolen from the kitchen and then slipped into the inky darkness, never to be heard from again. One year, the prisoners staged the play "Count Dracula" for the guards and their families: After the show, the lead paddled to freedom in the specially built coffin.

Those left behind try to maintain the illusion that those who disappeared were successful in their attempts, but everyone knows, in the bottom of his convict heart, that for most, if not all, it was a final escape.

Trinket, a pre-op tranny inmate, and her soon-to-be released boyfriend arranged a rendezvous off the point. The boyfriend got out and, at the prearranged time, Trinket dog-paddled out to meet him in his powerboat. Trinket didn't have the strength to pull herself out of the water and the splashing and commotion alerted the guards.

The boyfriend panicked and gunned the outboard motor. The propellers caught Trinket, though she somehow managed to clamber aboard. She was found dead the next day by a motel chambermaid -- the bed a bloody mess from her stomach having been churned open by the blades.

A one-legged friend of mine fashioned a wet suit out of polyurethane bags, string and duct tape. After dark, on his big night, Ian hobbled down the rocks, unstrapped his leg, climbed into his makeshift suit and jumped in. He planned to swim to the nearest beach, a half a mile across the bay, where his getaway vehicle would await.

Ian told me he had been a good swimmer in high school, before the motorcycle accident, and he seemed so determined and confident I didn't have the heart to give him the obvious news -- that he was one leg lighter and 20 years older.

About 15 minutes before the 10 p.m. count, I was lying on my bunk on the second floor of the dormitory wing, saying prayers for Ian, when I heard my name being called from the ground below. Ian wanted a towel and some dry clothes so he could slip in past the guards in time for count.

Turned out his getaway vehicle hadn't shown up, and with one leg and a 20-mile trek to the nearest lights, he'd turned around and swum back. We retrieved his wooden leg from the rocks the next morning.

Ian finished his bit, was released, and died the same day from a heroin overdose.

Each day, no matter what the season, I walk the trails above the beaches; I sit on the hard ground of the prison and gaze at the hammered pewter surface of the sea. I am not hoping for whiskey bottles, Ziploc baggies or vibrators. Nor am I studying a tide to paddle away on.

I do notice these things -- for an amusement, sometimes a provocation, and always a connection -- but float out on these connections, escaping into a part of my mind. And when there is a still moment -- when there is no wind, no movement, no faraway shore -- the deep places draw me down. Then I sink slowly, lazily, like old grief, and finally come to rest at the bottom of the world.

Stephen Reid is a writer and an inmate of William Head Penitentiary, where he is serving time for bank robbery. His latest novel is "Jackrabbit Parole."