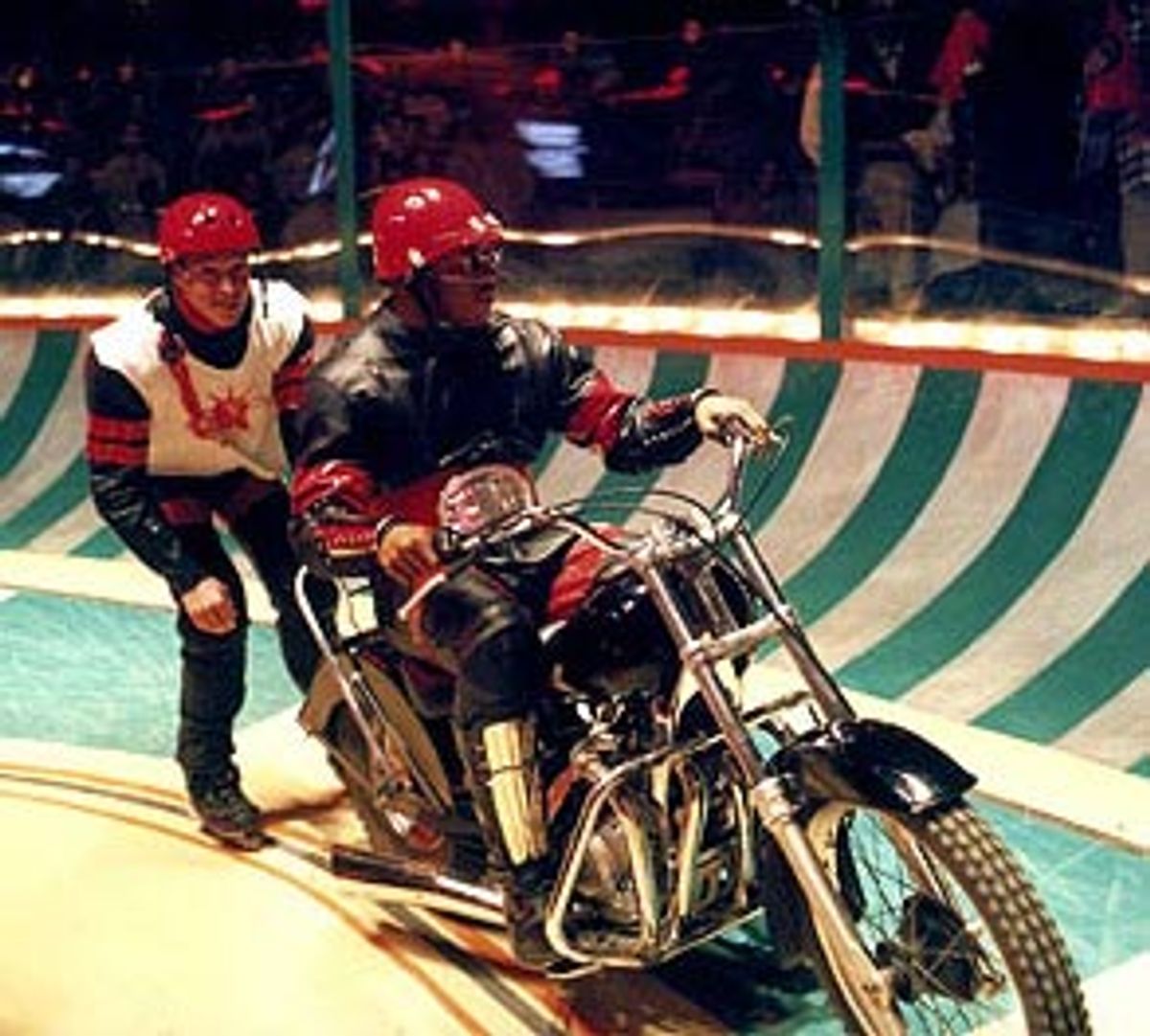 Imagine a time when faceless multinational corporations rule the earth. Companies make the laws and change them at will. Information machines swallow history books.

There is an almost Aristotelian division among the classes. Executives enjoy the privilege and luxury of a rich, technological society. The proletariat consumes competitive sports. And a few ferocious athletes distract everyone in contests of spectacle and violence.

It should. And not because of the recent World Economic Forum meetings, nor the Super Bowl.

No, fans of pulpy, big-budget B movies will remember this as the future predicted in Norman Jewison's violent, dogmatic 1975 film "Rollerball."

The movie, based on a short story by William Harrison, combined a nihilistic political allegory with lots of violence perpetrated by men with bushy moustaches who zoomed around a wooden track on roller skates and smashed faces with studded leather gloves. It was not an ambivalent film. Bad men wore impeccable suits, worked in buildings that looked like they were designed by Eero Saarinen and were always accompanied by vaguely menacing classical music. The star player (James Caan) loved freedom, Texas and a good, solid cross-check.

Well, the future just isn't what it used to be. We skate on Rollerblades, for example.

In John McTiernan's brand-new remake of "Rollerball" (there's more creative bankruptcy in that clause than in a dozen post-"Saving Private Ryan" World War II movies), there are some other important differences. First of all, the future really isn't the future; it's more like an international present consumed by some potent conflagration of the X Games and professional wrestling. Here, Rollerball is not a ludicrously violent game dreamed up to prove the futility of individual effort, but "the hottest start-up sports-entertainment property in the world."

Second, Rollerball is not ruled by multinational corporations but by a grinning Russian mobster-businessman named Petrovich (Jean Reno) who's in it for gambling receipts, "instant global ratings" and "a North American cable deal." The multinationals here are the mostly underpaid players who hail from Indonesia, France and Mongolia.

Jonathan Cross (Chris Klein, the lacrosse jock from "American Pie") is one of the game's American imports. At the start of the film, he's an out-of-work hockey player who hangs around San Francisco and competes in illegal street luge contests down Powell Street. After his minor protest against the game -- "it's a circus, not a sport" -- a Porsche-driving, diamond-wearing Rollerballer named Ridley (L.L. Cool J) lures him to Rollerball-capital Kazakhstan. Four months later Jonathan is a well-paid star player, showboating on the track and zooming around in fast cars lent to him by the team.

According to an indulgent John Madden/John Candy-esque sports announcer, the rules of Rollerball are "Russian and complicated." Boy, is he right. We hear some objects and see some animations -- not to mention a couple of games -- and they never make sense. We know it all has something to do with a figure-8 molded skate-park track with bermed walls and jumps, a big steel ball, a bunch of people on Rollerblades, some people on tricked-out motorcycles, something called "a rabbit hole" and a big target that shoots off fireworks when hit with the steel ball. It's the kind of thing that makes you yearn for the simplicity of an old-fashioned tag-team wrestling steel-cage death match.

With the help of teammate and love-interest Aurora (Rebecca Romijn-Stamos), Jonathan and Ridley discover that the Russian mob is rigging violent fights to boost ratings during the games. (Up to a dozen players per game died in the original "Rollerball," making the new revelation particularly unremarkable to anyone who remembers the old version.) Jonathan and Ridley want out, but Petrovich won't allow it. The two Americans set out to escape Kazakhstan for some other bordering -stan.

Part of the problem with "Rollerball" is that director McTiernan doesn't seem to know what kind of movie this is supposed to be. There's an actioner with a small phalanx of stuntmen, a sports movie, an escape tale, some watery intrigue, a Slipknot video, a Mountain Dew commercial and a costume picture all vying for his, and our, attention.

It's not like anyone paying eight or nine bucks to watch something titled "Rollerball" would get caught off guard by flashy trash, but flashy trash should be entertaining. This isn't, probably because McTiernan botches what is certainly the center of the movie by massacring the action. The shaky camerawork, low angles and quick edits never allow for a sense of the sport: He wants to put you in the game, not show you how it's played. There's very little athletic poetry or even teamwork. We never even see why Jonathan is supposed to be so good, only that he bogarts the ball like Michael Jordan trying to win a playoff game with a team full of guys he picked up at the playground.

God help us if this is what they want.

There are flashes of excellence: Rebecca Romijn-Stamos' arched eyebrows for instance. With a bad-ass scar and a merely bad Russian accent, she looks and sounds even more like a comic-book character than she did in "X-Men."

The rest of "Rollerball," like the original, is a terrible movie tempered by terrific visual design and fabulous costumes. The teams fly Russian constructivist banners, and the players wear cool molded-plastic helmets and dress up their leather uniforms with corsets, tutus and ripped T-shirts. If it were a better film, we'd be seeing Rollerballers with their team numbers painted under their left eyes every Halloween along with the baseball gang from "The Warriors" or the droogs from "A Clockwork Orange."

The film's more obvious points are that one day men and women will play sports together and share locker rooms as equals (Paul Verhoeven made a similar point earlier, and funnier, in "Starship Troopers"), that games will be increasingly international, that the media manipulates and distorts -- often with the help of duplicitous press releases -- and that black men can be accountants and sons of pediatricians, even if everyone wants them to be crack babies with a command of hip-hop slang.

If it all sounds a little heavy-handed, the new "Rollerball" is still subtler than the original, allowing for a concept of subtlety that includes Rob Zombie on the soundtrack and go-go dancers in bondage gear. But there's a muddy pit between subtle and inept, and "Rollerball" gets in it and rolls around for about 99 minutes. And we don't always need subtlety: It might have been rewarding to find out more about some local riots, or even why Jonathan becomes some sort of revolutionary for merely standing up to a corrupt game.

But we didn't even need that much. The first "Rollerball" is still fun to watch because it was made by competent filmmakers, because it had great design (and maybe the best fonts in cinematic history), because the action had a little sport and because all those inflated political statements added up to a brutalistic nothing at the end.

The new "Rollerball" wants to thrill us with all sorts of flashy cinematography, some extreme thrill rides and a victorious hero who smashes a singular villain and walks away with the girl. It might be a better movie if it just stayed on the track and threw some tough punches.