Is O'Donnell's admission of her sexual preference a bombshell -- or a no-brainer? 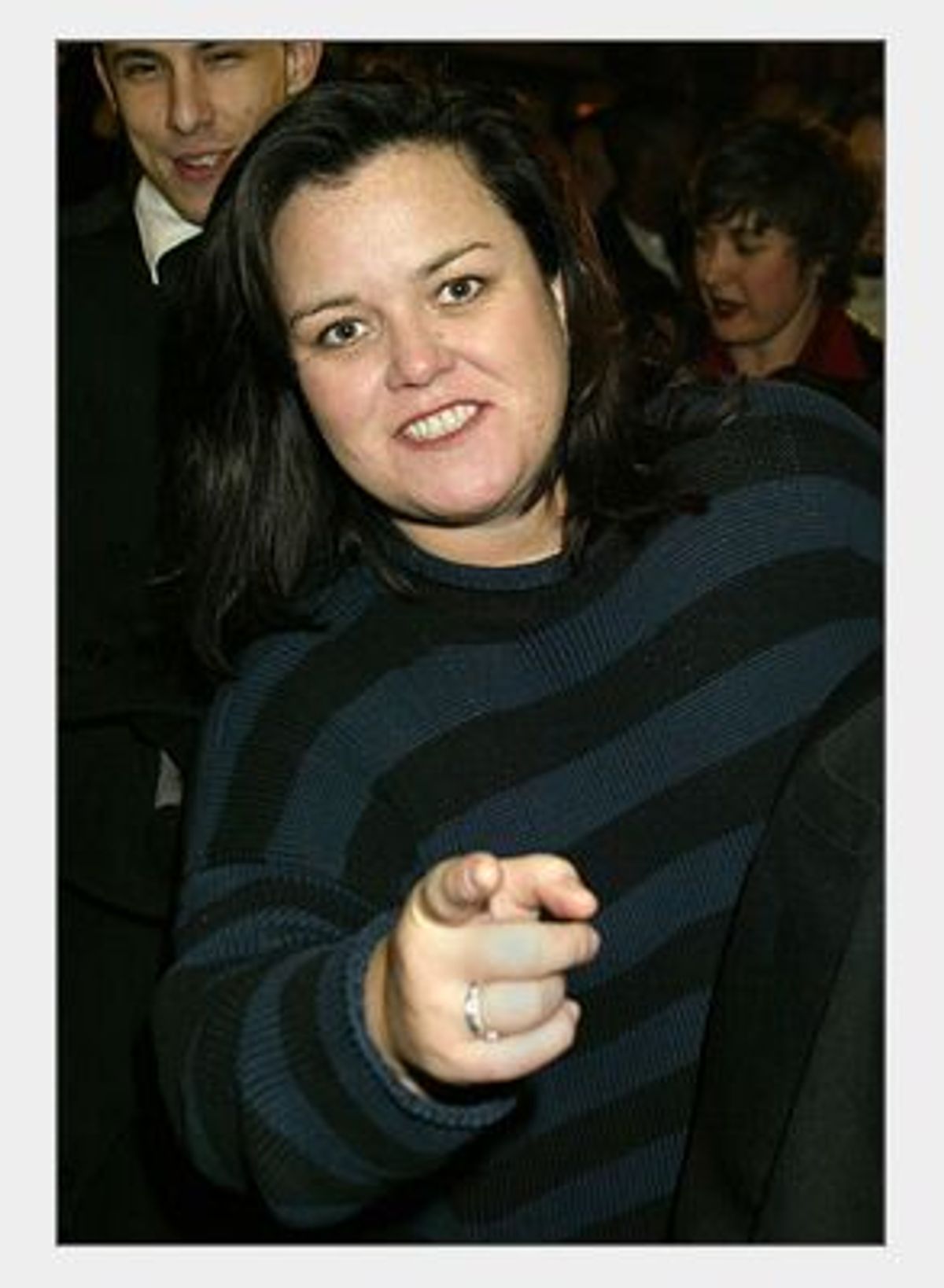 It's not as if it's going to come as a surprise. On April 23, when daytime chat show hostess, magazine magnate and mother of three Rosie O'Donnell releases her autobiography "Find Me," readers all across the country will reportedly learn about her family, her rise to fame and her romantic relationships -- with women.

O'Donnell's revelation is at once a no-brainer and a bombshell. Sure, this is the woman who has coyly traded "beard" references with Nathan Lane at the Tonys, who declared "I love you" to a woman named Kelly when she picked up a daytime Emmy last summer and whose public fascination with Tom Cruise has for years been a not terribly in gay in-joke. It's difficult to imagine that anyone, even the dullest blade among the entertainment gobbling populace, hasn't sussed it out by now. In recent weeks, however, the hints have been growing even less subtle.

First, in late January, O'Donnell was a guest on "Will & Grace," playing a lesbian mother. Then Monday's MediaWeek announced that Warner Books had "confirmed in published reports" that "O'Donnell's sexual orientation will be discussed" in her memoir. And in the same article, Dan Brewster, president and CEO of Rosie magazine's publisher G+J USA, declared, "Let's face it -- this is not the first magazine that has had a gay editor."

In an era in which celebrities routinely share their most intimate kinks and private bodily functions, O'Donnell's prior history of circumspection can be interpreted as a maddeningly taciturn testing of the waters. But perhaps it was something else entirely. What may previously have looked like reluctance may simply have been restraint. Her forthcoming book promises to touch upon her love life, while emphatically not devoting itself entirely to it.

You could hardly blame anyone for not wanting to risk having her professional life eclipsed by her private one, especially someone like O'Donnell, one of the few really big-time celebrities who seems to understand the distinction between the stage and the home. She may just be finally answering the question so nobody has to ask it anymore, and we can all just shut up and move on.

On the other hand, it's not that simple. No matter how casually she may try to do it, this is a big deal. Having an open secret, a winking, don't ask, don't tell, personal life is one thing. Being officially out of the closet is another. It's public. It's permanent. Once you come out, you can't go back, unless you're Anne Heche, and nobody in their right mind wants to be that anyway. O'Donnell will easily become the biggest celebrity to ever cop to being gay, an entertainer at the height of her fame whose target audience is composed largely not of Pride Fest flag wavers but bake sale cupcake makers. Are the ordinary housewives who thumb her magazine for craft projects ready to accept their icon as an openly homosexual woman? What, like dykes can't scrapbook?

The notion of celebrity coming out is still a relatively new one, spurred in large part by the early AIDS crisis years of the '80s. AIDS gave coming out a noble veneer that audiences could grasp -- solidarity in sickness. Yet it still left gay women, far less affected by the disease, lagging behind. But in the early '90s, artists like k.d. lang and Melissa Etheridge (who titled an album "Yes I Am" for anyone who missed the point) came out and reaped their biggest career successes, igniting a phenomenon quickly and unfortunately referred to as "lesbian chic." Saphhism! It's the new black!

Lesbian chic reached its apex in 1997, when Ellen DeGeneres came out both off-screen and on her otherwise unremarkable ABC sitcom "Ellen." But just five years ago, coming out still meant being willing to become a full-time professional homosexual. Melissa, k.d., Ellen and others, despite their undeniable talents and audiences that extended far beyond gay communities, were and still largely are known for their orientations. And lesbian chic, with its faddish implications, shone the spotlight so brightly on one side of its chic lesbians' lives that there seemed no room for anything else in there.

Now, however, it's a different world. Films like "Mulholland Drive" and TV series like "Queer as Folk" prove that orientation can be pivotal to the story without being a substitute for one. Even DeGeneres, whose first series nose-dived as she floundered to find a raison d'être beyond the title character's gayness, emerged this year as the relaxed, funny host of the Emmys and star of a show about a woman whose orientation was just one aspect of her situation-comedy life. The subject of homosexuality, thankfully, has lost much of its novelty effect.

O'Donnell is already well established as the sort of multihyphenate that one more hyphen -- queer -- couldn't hurt. She's been Entertainment Weekly's Entertainer of the Year and been dubbed the Queen of Nice by Newsweek. She took the venerable McCall's magazine off life support, renamed it after herself and had a spectacularly successful print launch in one of the industry's most dismal years. She's a big enough star that, what the hell, she's leaving her own show in June to devote more time to her magazine, her family and the adoption agency she founded.

As part of the holy trinity of multitentacled female celebrity moguls, she's the most regular gal. Martha and Oprah exasperate and impress with their boundless workaholism, their well-manicured confidence, their unflagging certainty in their own dominance over all they survey.

Rosie, despite being a tireless advocate for a number of worthy causes and a no-nonsense businesswoman with a bank account that would make Argentina envious, is still the most fully rounded. She's the harried mom who can speak with authority on what it's like when a kid pukes into your mouth. She's a collector with a dubious penchant for Happy Meal prizes. She's large and a little tacky, generous, genial and eccentric. America, she's us.

If someone that accessible and brazenly mainstream, so normal and regular, can publicly acknowledge who she is and who she loves, it's time to call Jerry Falwell and tell him it's over, because to marginalize gay people at this point in the game is going to be absurd. Rosie's disclosure will be revolutionary by virtue of its ordinariness. Because for all of us, sexual identity is integral to who we are but it's not the sum of who we are. We can be ourselves -- gay, straight or anywhere in between -- in the context of being parents and professionals and even goofballs who hoard action figures. It's everything. It's nothing. Rosie knows. And she knows we know too. Her autobiography, still two months away from hitting bookshelves, is currently ranked on Amazon at No. 68. Her continued acceptance, it would appear, is all but assured.