News you can abuse

"Primetime Glick" and "The Daily Show" prove you can even parody the gruesome self-parody that is entertainment journalism. 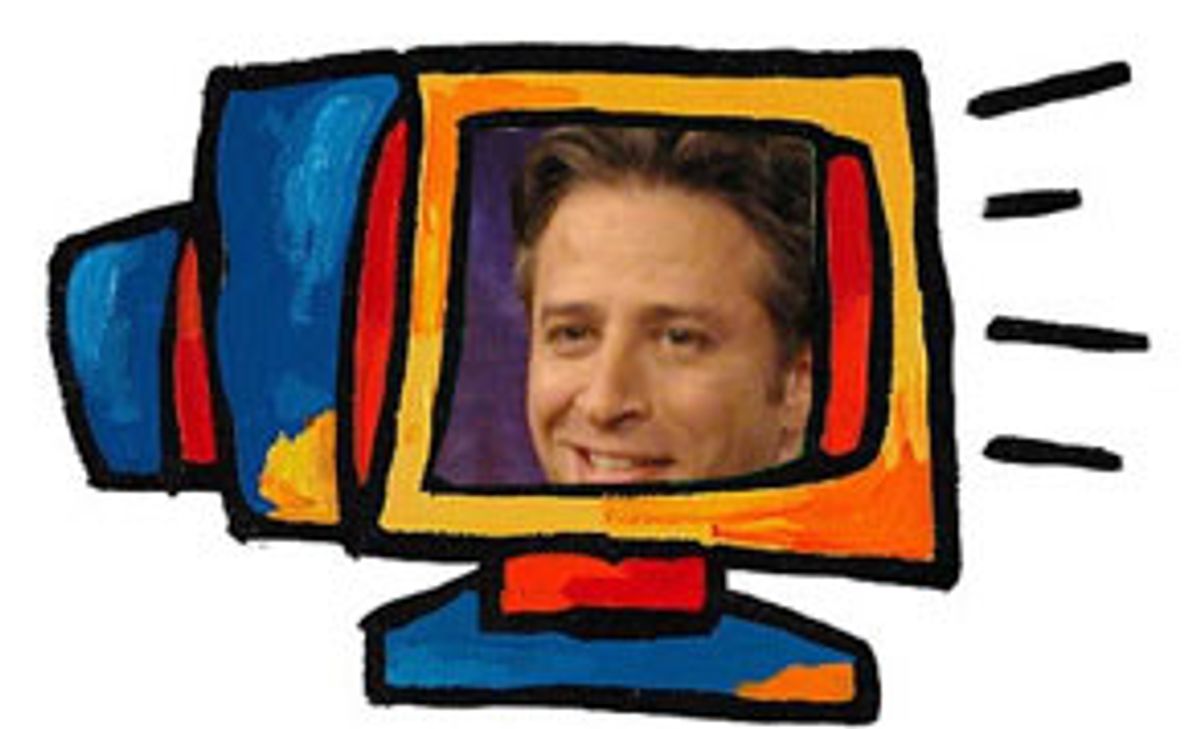 It can't be easy to parody something that does such a good job of parodying itself, especially when the objects of the parody are sincerely aiming for earnest, honest, "unflinching" (and maybe just a little bit sexy) and missing it by a mile. Generally speaking, when it comes to TV news and entertainment journalists, the less they flinch, the more we cringe. Just look at Stone Phillips.

Still, after watching them flail and rummage for answers they could never find during the months that followed Sept. 11, it's reassuring, in a small way, to see the old, familiar heads chewing on the old, familiar subjects again. A few months ago, even Mary Hart of "Entertainment Tonight" might have refrained from asking an ailing Kirk Douglas a question like, "The day you actually went in and loaded a gun and put it in your mouth ... how serious were you about suicide?" Not anymore.

For the most part, TV journalism has returned to its usual, cheerfully solipsistic ways. In the past several weeks we have tuned in to watch the dust-up over the "I'm too sexy for my channel" Paula Zahn promo (zip!), the controversy over Geraldo's not-quite-firsthand experiences in Afghanistan (which he followed up by accusing a fellow journalist of situational incontinence, in the now infamous "poopy-pants" interview) and the hubbub over Greta Van Susteren's alarming head transplant. And why not? (It's not as if anyone is actually saying anything over at the Enron hearings.)

Why not succumb to Bob Costas and Jim McKay and their Olympian tales of triumph over motherlessness, broken feet, transplanted livers, brain damage, giant blisters and all manner of adversity? (And, don't forget, the Oscars are coming up. Why not cry along with Nicole Kidman and Barbara Walters afterward? Go ahead. It's news. It's good for you.) Furthermore, it's stories like these that make it possible for shows like Comedy Central's "Primetime Glick" and "The Daily Show" to make fun of stories like these.

Both "Primetime Glick" and "The Daily Show" center around hosts who are unafraid to ask the really dumb (and really honest) questions, and both hosts routinely and cheerfully admit to not having read their guests' books, seen their movies or watched their shows. (Glick can barely be bothered to remember his guests' last names.) On "Primetime Glick," which returns to Comedy Central for a second season next week, a padded and addlepated Martin Short plays Jiminy Glick, a know-nothing celebrity interviewer with a carefully constructed bio that he keeps carelessly deconstructing. (Among the few immutable facts of his life are his 25-year marriage to his wife, Dixie, and the existence of four sons, Morgan, Mason, Matthew and Modine.)

With his huge, owlish glasses, sweat-sieving pastel satin shirts, chin like a blow-up travel pillow and bulbous fatty suit (a costuming decision that in itself caused a minor media frenzy, back in the day when these things still caused media frenzies), Glick is equal parts Mary Hart, Barbara Walters, Joan Rivers and Jay Leno, with a little bit of James Lipton ("Inside the Actor's Studio") and Larry King thrown in. On each episode, Glick chats with two celebrity guests, one of whom joins Glick on set (and later in the steam room), while the other is interviewed in a homelike environment, Barbara Walters style.

Alternately fawning over and insulting his celebrity guests while sweating and fidgeting and choking on handfuls of snacks, Glick glides effortlessly between cross-eyed concern, bogus complicity and total boredom. Unlike Garry Shandling's moody and caustic talk-show host on "The Larry Sanders Show," Short's Glick is all obsequiousness and indiscretion. A jiggly piece of Hollywood flotsam, he is about as prone to introspection and self-consciousness as one of the sugary, glazed donuts he keeps within reach at all times.

Glick's preparation for an interview rarely goes beyond looking up a guest's birth date so he can point out that they share a birthday with Melissa Rivers or Genghis Khan, and he is prone to interrupting interesting revelations with a totally absurd question like, "Jerry Seinfeld, who are you fed up with? Delta Burke?" Whether he is keeling forward in mock absorption; leaping up from his chair in feigned fits of enthusiasm (and back onto it in contorted positions that usually lead to the toppling of the chair); raising and lowering his voice from a piercing falsetto to a dramatic baritone; letting out a booming, obsequious laugh or bantering with his overly tanned bandleader, the harp-playing Adrien Van Vorhees (Michael McKean) -- everything about Glick smacks of falsity, sycophancy and cluelessness.

Not surprisingly, it's Glick's most stupid and indiscreet questions that lead to the most surprising (and revealing) reactions among his guests, especially since they can't believe what is happening to them. In fact, the most notable difference between "Primetime Glick" and, say, "The Tonight Show" is that the former is almost entirely improvisational. Despite the illusion of spontaneity they present, most talk shows provide guests with a list of questions and mutually agreed-upon subjects before the show begins -- a practice that was hilariously revealed in an early episode of the recently concluded "Project Greenlight." (Ben Affleck and Jay Leno pretend to bring the contest winner, Pete Jones, onto the set at the spur of the moment, while, moments earlier, we have seen Affleck explain the whole thing to Jones in the limo on the way to the show.)

On "The Daily Show," Jon Stewart consistently points out the ticks and gimmicks of televised news by halfheartedly adopting them, then realizing his mistake. An anchorman mannerism or intonation he mimes is an anchorman affectation he subverts immediately, simply by letting his face register an honest reaction to what he has just said or done. (During a recent story on Britney Spears, he called her "the pop diva," then explained, "you have to call her that in the third reference to her in any story.") His principal target, however, is the way the media mediates events. (A recent New Yorker profile of Stewart tells of how, not long after taking over the show from Craig Kilborn, Stewart took his writing staff aside and urged them to lose the slick and cynical "adjectival humor" and replace it with jokes "about how we really feel.")

As Glick, on the other hand, Short takes aim at the carefully constructed false world of celebrity. Just as Stewart knows that the only way to subvert the false earnestness and import of even the most inane newscast is to betray even a hint of humanity and humor, Short understands that if anything is anathema to the celebrity interview, it's how anybody "really feels" about anything.

This makes it especially fun to watch Glick's guests squirm out of the potentially uncomfortable questions regarding colleagues that he keeps lobbing at them. When Steve Martin talks about doing "Waiting for Godot" with Robin Williams, and Glick says, "They didn't straitjacket Robin, did they? If they straitjacket Robin they are making a big mistake, because Robin is free. Certain people like yourself need the lines," there's no question who is being mocked. It's not unreasonable to worry about the damage Williams could do to one of the greatest plays of the 20th century, and though Glick doesn't get his own meaning, Martin certainly seems to.

Although generally amused, his guests are usually careful not to let down their guards and join in the tearing down of the whole apparatus. On an upcoming episode featuring Ben Stiller, for example, Glick joins Stiller "at home" to ask him about his famous family. It's difficult to tell whether Stiller is genuinely taken aback by the terrifying Glick or whether he is playing a part himself, that of the diffident celebrity interviewee. In either case, his responses are careful and circumspect.

"Let's talk about your father, Jerry Stiller. He's on the wonderful series 'Queer as Folk.'"

Stiller laughs, amazed, but refuses to say anything that might be construed as critical of that show. Instead, he politely corrects him. "No, you're mistaken. He's on 'King of Queens."

"Oh, so that's what they're calling it now," says Glick. And a few moments later:

"Your mother, Anne Heche -- what's it like to be the daughter of someone so clearly insane?"

Again, Stiller refrains from saying anything remotely impolitic and merely explains that his mother is not Anne Heche, but Anne Meara. At this point, as usual, Jiminy has lost interest in the answer. He puts a meaty fist to his chin, lowers his voice and squints.

"Do you have demons, Ben Stiller?"

If Glick's humor stems from his ignorance and near-perfect insensitivity to everything and everyone (as he says to Janeane Garofalo, "There's so much I want to ask you ... but part of me is just not that interested"), Stewart's comes from his ability to home in on the telling details. On a recent show, he played a clip from the Winter Olympics' Opening Ceremony in which Katie Couric and Bob Costas introduce the "Search for the Fire Within" skating performance. In it, a young boy skates in search of his inner fire, while confronting a series of increasingly bizarre obstacles on ice.

"It's an allegory that works on so many levels," Couric says, all earnestness and light, and Stewart has to take a long pause before he can speak again without laughing. Soon, we watch as the skating boy is confronted by a group of skaters in coyote leotards, and then -- just as we're wondering what is up with the pointy white hats -- "some local Klansmen on loan from the Hatecapades across town."

Whether Stewart is skewering a display as maudlin as the Olympics Opening Ceremony ("If you love pomp, pageantry, ceremony and sentiment, you might be able to get through the first, oh, two, two and a half hours") or Glick is embracing the manufactured "cool" of the MTV music awards ("It's like Paris in the '20s, without all the art! I love it! ... I love the limitations of a modern education! Keeping it real!"), the effect is similar -- and consistently funny.

Meanwhile, in Salt Lake City, Bob Costas and Jim McKay keep churning out the "special Olympic stories" (who, after all, can resist the heartwarming sight of a Uzbek figure skater competing with a broken foot, wincing in pain and looking like she's about to faint?); and Katie, Matt and Al frolic insouciantly in the snow, earning the big bucks the cute way.