Not a girl, not a woman and definitely not an actress -- but Britney Spears does have something besides that jailbait pout. 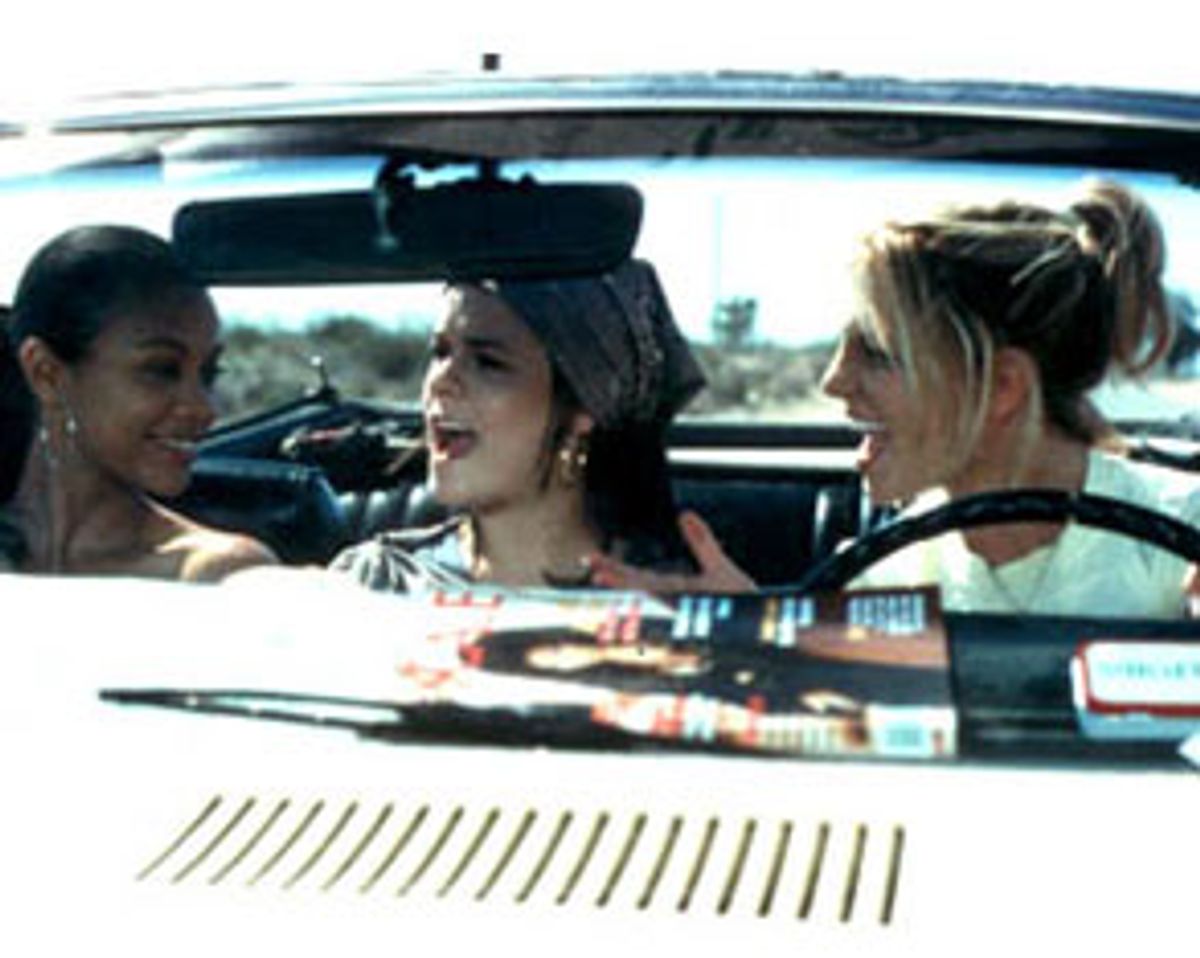 It's easy to trash Britney Spears, she of the twitching rump and prefab warbling. What's harder is coming to grips with the reality that no matter what you think of her as a musical performer or as an actress, she has more than a spark of genuine likability.

In "Crossroads," her first film star vehicle, she's already beginning to coast on bad habits, like winkling and twinkling adorably and manipulating her preternaturally glossy mouth into a jailbaitish pout. At moments, though, she shows traces of the devilish naughtiness that makes Heather Locklear -- a gifted and largely overlooked comic actress -- so much fun to watch. Spears doesn't have Locklear's zonked-out braininess or her stopwatch timing, and she most likely never will. But her performance in "Crossroads" suggests that there's something going on behind those schoolgirl-vixen eyes -- something that she actually has to shut off every time she gets up to sing.

Just don't pay too much attention to the writing. Spears, Zoë Saldana and Taryn Manning play three young women who used to be childhood best friends but have grown apart by the time they graduate from high school. Spears, bright and effervescently sensible, has become the class valedictorian; Saldana is now the school's most popular girl, whose chief interests are clothes, shoes and her college-freshman boyfriend, in that order; Manning, the slightly rough around the edges girl from the other side of the tracks, has gotten herself pregnant and isn't sure how she wants to deal with it.

The three come back together, warily, leaving their Georgia hometown for a California adventure. Spears, for her part, plans to bail out in Arizona to visit her mother (Kim Catrall), who left her and her father (played sweetly if unmemorably by Dan Aykroyd) when she was 3. There's a fourth member of their party: The car they're riding in belongs to a hunky but dangerous older boy, played by the stupendously named Anson Mount. (And you can bet that by picture's end, one lucky girl will ascend the peak.)

"Crossroads" is most enjoyable in its most offhand moments, like the early scene in which Spears jumps around her bedroom, clad only in a skimpy cami-and-panties outfit, singing along with gusto to Madonna's "Open Your Heart." Manning -- who played Kirsten Dunst's tough-cookie sidekick in "Crazy/Beautiful" -- sharpens and brightens every scene she's in. She's got that great cat's tongue roughness that the young Jodie Foster used to have.

But "Crossroads" only deteriorates as it rumbles along. At one point Mount catches Spears furtively scribbling poems in a notebook and asks her to read one aloud to him. Until that moment, Spears has come off as a reasonably intelligent being; when she begins reading the words she's written ("I feel like I'm caught in the middle/That's when I realize/I'm not a girl/Not yet a woman"), it's a bad moon rising -- you can almost see that dopey mist rolling in over the Bimbo Mountains as Spears feels a song coming on.

Director Tamra Davis ("Billy Madison") and writer Shonda Rhimes either don't trust their instincts or don't have any -- it's hard to tell which. When the three girls prepare to enter a karaoke contest in Louisiana (they need to raise money for an emergency car repair), we see them in the dressing room, looking cute, sassy and ready to conquer the world in their high-heeled boots. (Manning in particular looks fabulous; with her dark, shaggy mane hanging loose and spiky, she's a ringer for Joan Jett.)

But just as they're ready to go out, Saldana gets the notion that they have to look sexier -- in other words, tartier. When they finally hit the stage with their "improved" get-ups, Spears is wearing a tinier shirt ("Crossroads," in fact, could have been subtitled "The Incredible Shrinking Shirts") and a ringletty hairdo that looks like a bad perm. Manning's hair is done up in braids and beads à la Cher in her Unbearable Ethnic Period. Together the three look like Shania Twain's sleazier, younger cousins, and they trample over Jett's "I Love Rock 'n' Roll" (with Britney singing lead, of course) like a herd of restless bumpers and grinders who don't care a whit about rock 'n' roll at all.

But then, that's what always happens when Spears sings. By now we've all seen her slapping her melon-shaped ass and flicking her peroxide mane like a pony in heat; the problem isn't, as so many of her critics have posited, that she's selling sex. (Whenever we've bought a Madonna or a Rolling Stones record, sex has always been a part of why we plunk our money down.) It's that she's serving up sex that's been painstakingly denuded of intelligence and individuality and danger -- in fact, you could argue that it's hardly sex at all. I've never gasped in shock at the sight of Spears' ever-present thong or artfully shaped breasts; I've always been too bored.

Is it distressing that she's become a role model for little girls? It would be more so if it weren't so understandable. The kind of sexiness she serves up is so nonthreatening, and so uncomplicated, that it's best suited to 8-year-old girls. (I almost worry more about the teenage fans who should have better judgment and yet can't see, or refuse to see, how facile and unoriginal she is.)

And so in "Crossroads," tromping through "I Love Rock 'n' Roll" or the dorky single "I'm Not a Girl, Not Yet a Woman," Spears the robo-girl takes over. What is it, then, that makes her so appealing in the more casual moments of "Crossroads," the moments where she's just tossing the performance off and somehow, much of the time, pretty much making it work? Her acting, unlike her singing, rarely feels calculated and forced. She doesn't have much depth, but she doesn't need much here.

There are even some clues that she can see through her own feeble act. After she recites that poem to Mount, a flicker of something like embarrassment flashes across her face: She wrinkles her nose, sticks her tongue out just a little bit. We're supposed to read it as the self-effacement of a teenage girl who's just spilled her guts and feels vulnerable and silly. But is it possible that Spears knows deep in her heart that the words she spins into hits are nothing but a load of crap? Not a girl, not yet a woman -- but also not yet an actress we can write off as a bubblehead. She may be reaching her own crossroads, and with any luck, the devil's there waiting for her: At the very least, he has pretty good taste in songs.