Sure, they're back for one more year, but -- I never thought I'd say this -- I'll miss them when they're gone. 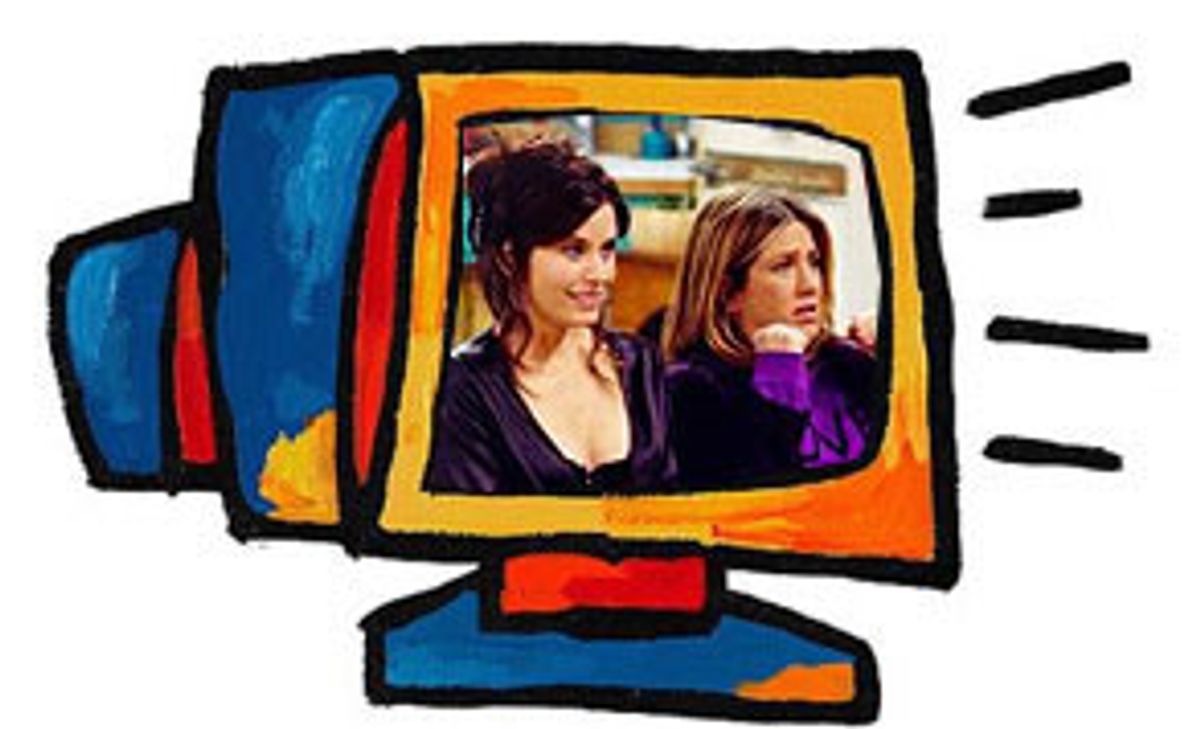 If I admit to some of the reasons why I didn't like "Friends" at first -- even before it aired, actually -- I'd have to admit to a few embarrassing things about myself. (Let me just say, in my defense, I was young. Maybe you can relate.) First, I was really pretty exercised about the whole "Gen-X" thing -- the "plight" of my "generation"; the mean Time magazine articles, the bad job market, that horrible Douglas Coupland book, etc., etc. Plus, Kurt Cobain was dead. The horror. The horror.

Second, I was feeling betrayed -- that's right -- by "the media." By "the media," I meant mostly a) "Melrose Place," which was originally intended as a saunter through the hopes and dreams of a group of downtrodden "twentysomethings" (the lingo's rushing back to me now!) but by 1994 had been transformed into a weekly visit to the lunatic bitch asylum; and b) a 1990 Time cover story that had authoritatively explained, "Down deep, what frustrates today's young people -- and those who observe them -- is their failure to create an original youth culture. The 1920s had jazz and the Lost Generation, the 1950s created the Beats, the 1960s brought everything embodied in the Summer of Love. But the twentysomething generation has yet to make a substantial cultural statement ... 'They don't even seem to know how to dress,' says sociologist Hirsch."

Third (full disclosure, as they say), I had a college friend who had landed a job writing for the show. And I liked my friend very much, so I felt a little bad about not liking "Friends." Shortly after the first season, he was visiting me in San Francisco, we were driving around in my smelly car and I must have been saying something not very nice because he turned to me, looking a little hurt, and said, "We're just trying to make a show about what it's like for young kids like you." Which would have been fine, except that I'm three months older than he is.

Remember that pivotal moment in "Reality Bites" (remember "Reality Bites" at all?) when Winona Ryder is asked by a potential employer what the definition of irony is and she responds, "I don't know, but I know it when I hear it"? Like Winona, I couldn't have defined it, either, and I was mortified when Ethan Hawke said coolly, "It's when what you say is the opposite of what you mean." And like Winona, I didn't know exactly what was bugging me, but I knew it when I saw it. It was "Friends."

But how's this for ironic? Four years before the premiere of "Friends," that same Time magazine cover story had complained, "Marketers are confounded as they try to reach a generation so rootless and noncommittal." Of course, that was before "Friends" had become the official sponsor of the whole wide world. It's hard to think of another generation that was so swiftly packaged and sold back to itself. "Friends" was far from the only culprit, but still.

In fairness to the young kids like us, they might have devoted at least a couple of early episodes to phones being cut off, or credit cards being cut up, or the question of why thrift-store pants smell the way they do. They might have laid off the "aw" track a little and shown a bowl of Ramen once in a while. They could have thrown young kids like us a little bone. I mean, the clothes! The haircuts! The soundtrack! Does anyone know why action figures were never made? I bought Tori Spelling, I would have eventually bought David Schwimmer.

But annoying mid-'90s overexposure aside, "Friends" outlived the trend that launched it (when was the last time you heard the term "Gen X"?) to become NBC's longest-running, highest-rated sitcom. And it's hard to believe that back when Marta Kauffman and David Crane were first readying the zeitgeist for prime time, no one was convinced it would fly. Fox passed on the show when it was first offered to them. NBC resisted the notion of focusing entirely on a cast of people in their 20s, and suggested including an older, "mentor" character in the person of the coffee-shop owner. (Because, you know, so few people spend time with their friends without bringing their mentors along.)

Even the idea of an ensemble cast was rejected at first. Courteney Cox's Monica was originally intended as the star of the show, and Phoebe and Chandler were initially thought of as supporting characters. And the networks were not the only ones who thought the concept narrow in its appeal. (What? No zany sidekicks? No snooty butlers? No adorable, smart-mouthed kids?) In 1994, even People magazine dismissed it in an uncharacteristically snippy blurb, saying, "The scripts are filled with pop references -- e.g., gags about David Hasselhoff, Shari Lewis and Mentos mints ... A game cast delivers the barrage of banter with an arch coyness that suggests they think they're in some Gen X Neil Simon play."

Well, yes. But what of it? If "Seinfeld" was a show about nothing, "Friends" is a show about anything. It was also, surprisingly, a show in which people hung out with other people their own age. If anything about "Friends" is realistic, in fact, it's that. When characters of different ages have appeared on the show, their ages have been major issues. (Monica's relationship with the much older Richard, for example, ultimately failed for that reason.) In fact, from the nondescript title (the network had originally wanted to call it "Friends Like These") to the equal weight given to the collect-them-all personalities -- Flaky, Jappy, Controlly, Smarmy, Mopey and Dopey -- everything about "Friends" that was considered narrow or unworkable became one of its most important assets. The premiseless format and infinite combinations and recombinations of personalities made "Friends" endlessly elastic. It's like "The Brady Bunch" with no parents. "The Naughty Brady Bunch."

But despite the show's success -- and NBC has been holding on to it for dear life, recently cheerfully upping the actors' salaries to $1 million per episode from $750,000 -- it's hard to say whether "Friends" has had much effect on the way sitcoms are conceived. "Friends" was sure-footed and unencumbered from the beginning, in large part because of its wide-open quality. Aside from the obvious (and mostly failed) rip-offs, many television comedies still rely on the usual contrived and improbable premises that can make a show seem exhausted before it even begins.

Take the newest Ellen DeGeneres vehicle as an example: Crazy things happen to woman in big city, so she moves back home to calm down. Or the upcoming "Leap of Faith" (Deduct points for punning on main character's name. Also, how many times is she planning on leaping?), in which all the exciting stuff -- girl goes out with wrong guy, becomes engaged to wrong guy, finally dumps wrong guy right before the wedding -- happens before the show even begins. Granted, "Friends" started on a similar note, with the notable difference that the girl in question, Rachel, was leaping into a menagerie of personalities that were not put on this fictional earth solely to cushion her landing. And anyway, we eventually saw her go through it all over again in a drawn-out, on-and-off affair with Ross, complete with 32-page letters. Clearly, someone knew how it was done.

Of course, "Friends" couldn't have existed without "Seinfeld." Although the latter was arguably a funnier show, "Friends" will probably age better in syndication. We loved the "Seinfeld" characters because they were loathsome, because they represented the opposite of what we were supposed to like and because they made us feel better about a future in which nothing was expected to happen. That Time magazine article also predicted we would balk at marriage, delay babies, avoid divorce. And we wouldn't have predicted that, only eight years later, many of us would have experienced all three.

Looking back, my friend the writer had a point, after all. We may have both been 25 at the time the show began, but some of us -- like Monica, Chandler, Rachel, Ross, Joey and Phoebe -- would remain 25 for a few more years. But then we all grew up. If Jerry, George, Kramer and Elaine hadn't landed in jail, they would have remained -- So here we are, forever. Forever and ever and ever -- in their own cozy hell, where no red-hot pokers were needed.

The "Friends," on the other hand, will probably end up living somewhere among us. Can't you picture it? Ten years from now, Chandler and Monica have moved to New Jersey. Phoebe has traveled for a year and settled in a yurt in Montana. Joey has landed a sitcom and moved to L.A. Rachel, still single, has stayed in New York and is running her own company. And one day Ross looks up from the paper, glances around with tremulous eyebrows and wonders where everyone went.

Then he gets on the phone and plans a "Big Chill" weekend at his sister's house in Montclair.