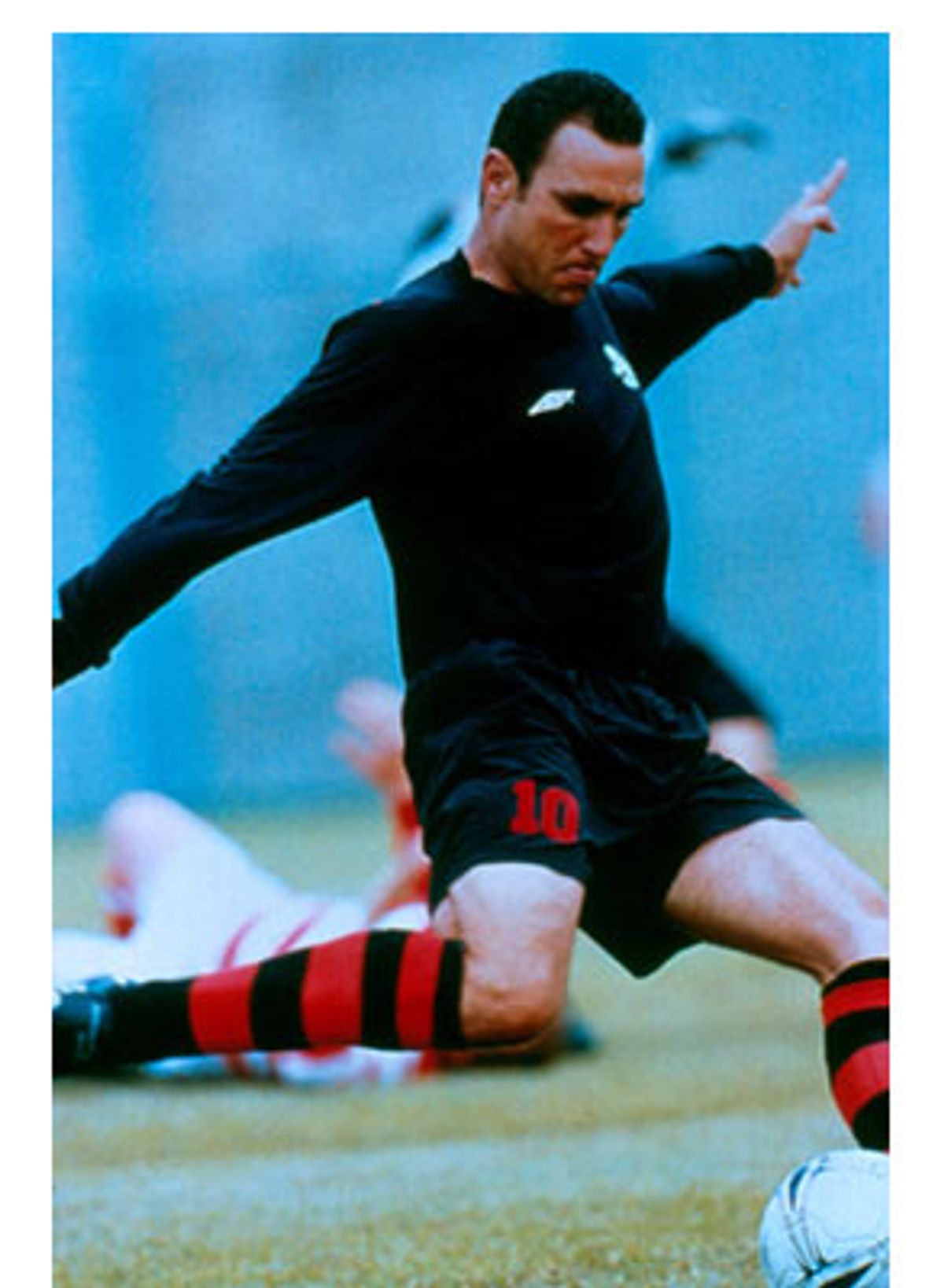 So let's see: Take the 1974 Burt Reynolds prison-football classic "The Longest Yard" and remake it in England as a soccer film, dense with cockney slang and the laddish style of such recent Brit-pop films as "Lock, Stock and Two Smoking Barrels." The result is "Mean Machine," which is unlikely to attract American multiplex audiences (even in this World Cup year) but provides agreeable enough entertainment on its own terms. Like the original -- which was titled "The Mean Machine" in British release -- this movie can't decide whether it's a knockabout farce or a fable of cruelty and courage, and winds up in some uncertain middle ground of faux-Hemingway sentimentality, pawing the ground and staring at its feet.

If you're already a soccer fan, or the sort of avid Anglophile who knows what "having a pony" means (in the parlance of American kindergarten, it's a number two), well, you're still not likely to confuse "Mean Machine" with a really good movie. It does, however, offer higher soccer credibility than any film in recent memory. (Does anyone besides me remember John Huston's 1981 embarrassment "Victory," featuring Sylvester Stallone, Michael Caine and the great Pelé as POWs who take on their Nazi guards? Didn't think so.)

In the Reynolds role of disgraced star athlete turned convict we have Vinnie Jones, who was himself a defender for the London team Wimbledon before taking on a series of tough-guy roles in Guy Ritchie's "Lock, Stock," "Snatch" and other films. Barry Skolnick, a British commercial director making his debut feature, shoots the climactic guards vs. prisoners game without stuntmen or doubles, and the results -- at least by the standards of sports movies -- are strikingly realistic. If nothing else, the scene in which Jones instructs his troops in the vicious tricks to inflict on opponents while the referee isn't looking should disabuse American viewers of the idea that football, English style, is a game for girlie-men.

Jones plays Danny Meehan, a former captain of the English national team who has been implicated in a gambling scandal and busted -- in an amusing prologue sequence -- for driving drunk and assaulting a pair of cops. (When told he must take a Breathalyzer test, Danny responds: "No need, constable. I'm totally fucking pissed.") Jones himself was never this kind of glamour boy as a player; to British viewers, Danny may suggest Paul Gascoigne, a prodigious soccer talent who ruined his career with all-night booze fests and other forms of self-indulgence, à la baseball's Darryl Strawberry.

So Danny finds himself in "the nick," among a bunch of ordinary decent criminals who see him as a national traitor in a way no run-of-the-mill thief or killer could ever be. From there "Mean Machine" follows the plot of "The Longest Yard" so closely, line by line and scene by scene, that original writer Tracy Keenan Wynn gets a screen credit (alongside Charlie Fletcher, Chris Baker and Andrew Day). Eddie Albert's corrupt warden in the 1974 film becomes the dissolute yet dapper governor played by David Hemmings, who hopes to use the guards-prisoners match to pay off his underworld gambling debts.

We get the usual array of prison-film characters, with the lingo adjusted and the haitches dropped: a fast-talking black con man (Vas Blackwood), a sinister crime lord with a long-standing grudge against Danny (John Forgeham), a weaselly and unstable snitch (Stephen Walters), an aging lifer loaded with jailhouse wisdom (the fine Irish actor David Kelly). Of course the "screws," or guards, are sadists, especially the beet-faced Ratchet (nicely played by Geoff Brown); but the head guard, Mr. Burton (Ralph Brown), is, like Danny himself, a hard man with a core of decency.

It's hard to tell whether Skolnick is cut out to direct movies; this one is circumscribed on one side by its American precursor and on the other by the Ritchie style that Skolnick slavishly imitates, with its crude, violent comedy, its music-video interpolations, its fetishization of macho "'ardness." But "Mean Machine" has two virtues over and above its fine soccer footage that almost make up for its posturing. Both are essentially architectural. Jones isn't a good actor in any technical sense, but his seamed and flattened head, his deep-set, glittering eyes, give him the air of a man who is holding something inside, whether it's tenderness or just malice. Then there's the decommissioned Oxford prison where the film was shot -- a palpably sinister Victorian ruin that encases the whole affair in just the right rainy, blue-gray dreariness.

In training his fellow cons to take on the guards' well-drilled semipro team, Danny has to instill trust, teamwork and other conventional if inexpressible masculine virtues. White and black inmates must learn to play together; Danny and Forgeham's crime boss must make peace. The stone-crazy killer everyone fears (Jason Statham, another veteran of Ritchie's films) must be recruited to play goalkeeper.

All grudges will be settled and all debts paid, to be sure, when the two sides take the field. The game itself is exciting if predictable, and the running commentary by two inmates (another device borrowed from the original) neatly spoofs the conventions of sports broadcasting. That's part of the problem, actually: I'm not sure "Mean Machine" is any worse than "The Longest Yard," but it lacks the nihilistic '70s background that lent the latter's combination of humor and brutality an air of (arguably bogus) social commentary. All this movie wants to do is take the piss, as Danny might say. That, and twist your nuts while the referee is elsewhere.