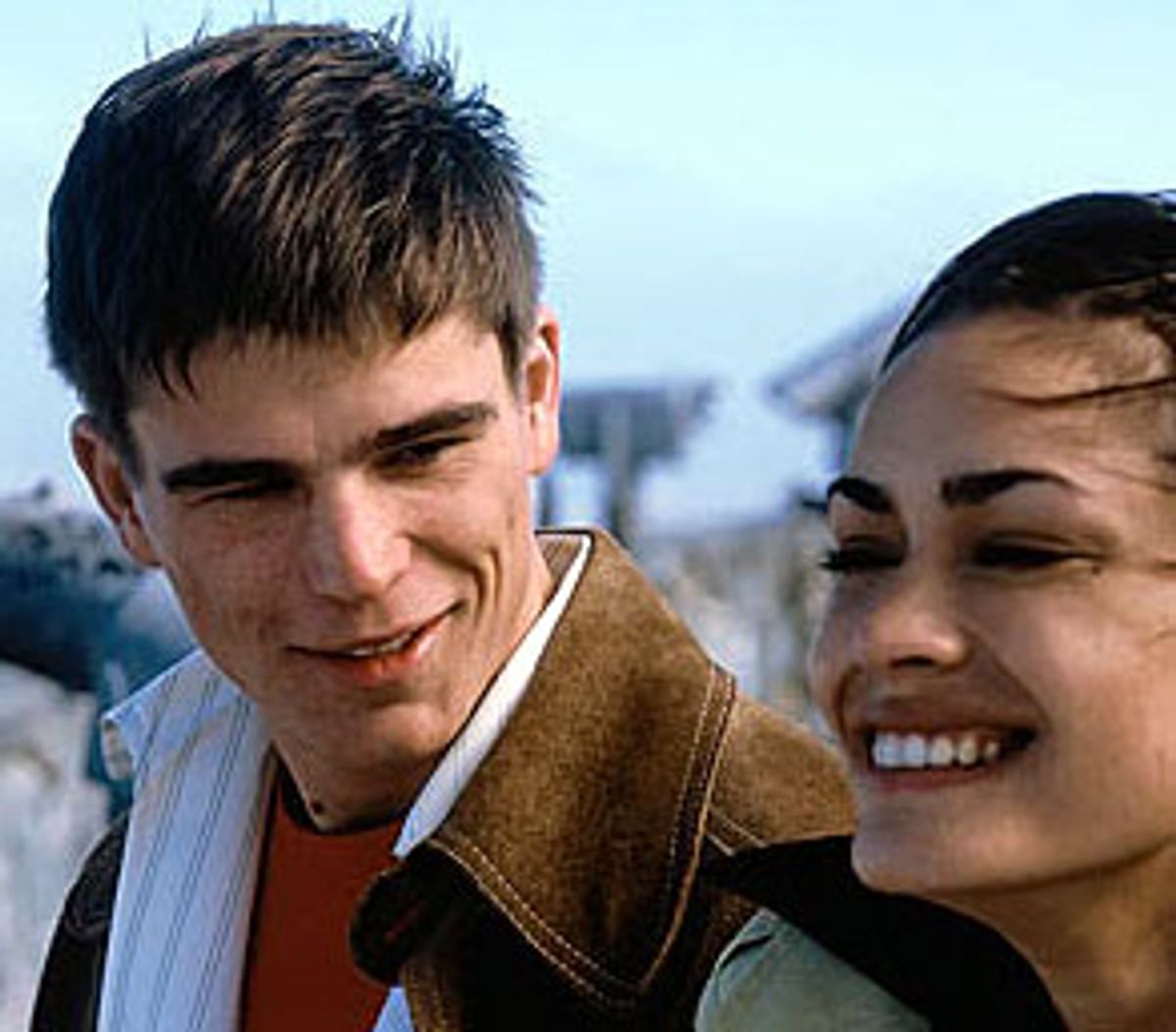 In "40 Days and 40 Nights" a young dot-commer played by Josh Hartnett vows to give up sex for Lent. In the right hands, the movie could have been a satire on the egotism inherent in the notion of sacrifice. But as we follow Matt as he struggles to keep it in his pants, the film leads him to a place where he becomes deeper and more committed in his sexuality. By the end, he's so in tune with his inner chubby that he doesn't even have to touch a girl to make her come. All it takes is blowing some flower petals around her pelvis. Could I get the name of his florist?

At the start of the film, Matt is still mooning over the ex-girlfriend, Nicole (Vinessa Shaw), who dumped him six months ago. At the same time, he's going out to bars and parties with his roommate Ryan (Paulo Costanzo, whose sideburns tell you everything you need to know about him) and sleeping with lots of girls -- one of the sanest and healthiest things you can do to get over a bad breakup.

The girls he beds aren't looking for a commitment so it's a win-win situation. But Matt wants something more. He can't be with a girl without imagining that the ceiling over his bed is cracking open to reveal a black void into which he's about to fall. And every new conquest sends him running to the confessional to tell his brother (Adam Trese), a priest in training. It's easy to see what's happening to Matt: He's whipped by memories of his ex as well as by the Church.

Matt's a decent enough kid, and you want to tell him that to everything there is a season, turn, turn, turn/A time to mope, a time to hump. And if "40 Days and 40 Nights" were a more honest movie, there'd be someone around to assure him that he should enjoy a little youthful friskiness. But the voice advocating hedonism is that of slacker Lothario Ryan, and you'd no more want to take this guy's advice on your sex life than you'd want Ken Lay as a personal investment advisor. And his brother is no help either, and not just because he's struggling with his own vow of celibacy. Would you want advice about your sex life from someone who's not getting any?

At first, it's portrayed as a boast. No one thinks Matt can do it, and unbeknownst to him, his office mates set up a pool on how long he can hold out. Most of those characters are so foolish -- nerd caricatures or, in the case of the three office temptresses, Penthouse Forum figures sprung to life -- that they're not exactly the voice of reason. And as the movie goes on, it seems to be moving over to Matt's side, buying into his view that he's becoming more mature, more able to see through the confusions of sex.

When he starts hanging out with a girl named Erica (Shannyn Sossamon) whom he meets in the laundromat, I was ready for the movie to settle into a farce about the absurdity of his vow. There's no doubt about the movie's view, though, after he does that trick with the flower petals. (Good thing he didn't bring her a cactus.)

It's not inconceivable that, after a period of promiscuity, someone would want something more. The trouble is, as the movie portrays it, Matt's enlightenment derives from his giving up sex -- not from his being able to tell the difference between sex for fun and sex with a connection.

That's a problem when it comes to Shannyn Sossamon, who looks like Angelina Jolie's kid sister and has a spiky charm that's the best thing in the movie. Sossamon's black hair sticks up like cat's whiskers, as if they were feeding her information about what to avoid, what to nuzzle. The movie's view of her sexual needs is like that of a high-school coach telling his athletes to preserve themselves for the big game. Matt has to ignore her desire so he can prove himself a better man.

There's another retro sexual dynamic at work here. Nicole, who we see at first only in home videos under the opening credits, reappears and is set up as a ball-busting bitch. Vinessa Shaw, who played the young hooker Tom Cruise picked up in "Eyes Wide Shut" and who was the only human thing in that picture, is treated horribly by this movie, the feline sexual predator who'll extract your life essence along with your semen. (She's also shot to look like a high-class hooker version of Hilary Swank.)

It may be amusing to younger audiences to see a hunk like Josh Hartnett refusing sex. And he might have been used well here. From his raw-boned, lantern-jawed good looks, to his low, hoarse molasses voice (he sounds like a stoner who's cleaned up his act and joined Junior Achievement), something about him suggests blockage. The downside of that is that he's closed off -- something Sofia Coppola used to good effect in "The Virgin Suicides," suggesting the self-involvement of his shag-haired, puka-shelled high-school stud. Something about Hartnett refuses to give itself up to the camera, and as Matt goes longer and longer without sex, his performance becomes predictably twitchy, more like someone who's downed five cups of cappuccino after pulling an all-nighter than someone who hasn't gotten laid.

It comes as no surprise, after the uniformly terrible "Heathers" and "Hudson Hawk" and "The Truth About Cats and Dogs," that it's easier to pick up mercury than it is for Michael Lehmann to latch onto an appropriate comic tone. "40 Days and 40 Nights" is flat; few of the jokes fly. To work, the movie needs the tone of a dirty fairy tale, an American commercial version of what Bertrand Blier brought to his sweet-tempered 1978 sex farce "Get Out Your Handkerchiefs."

The failing is most apparent in the fantasy sequences of Hartnett soaring over a landscape of female breasts or imagining that the women he sees on the street are naked. The nudity isn't sexy or funny -- it's just there conveying the faint embarrassment of someone trying to make a raunchy teen comedy without any spirit of racy fun. That's a problem too in the scenes where the office temptresses try to seduce Matt. When two of the girls begin French kissing each other, or when his co-workers are sneaking off to the bathroom with dirty magazines, the picture needs to have an air of the fantastical. It's too mild to be crass; it's clumsy. Lehmann has made what amounts to an anti-sex sex comedy, the first youth sex comedy made to be enjoyed by those creepy abstinence teens.