With music and mind-blowing visuals, Stanley Kubrick created a wildly popular avant-garde film that asked all of the biggest questions -- without venturing any easy answers. 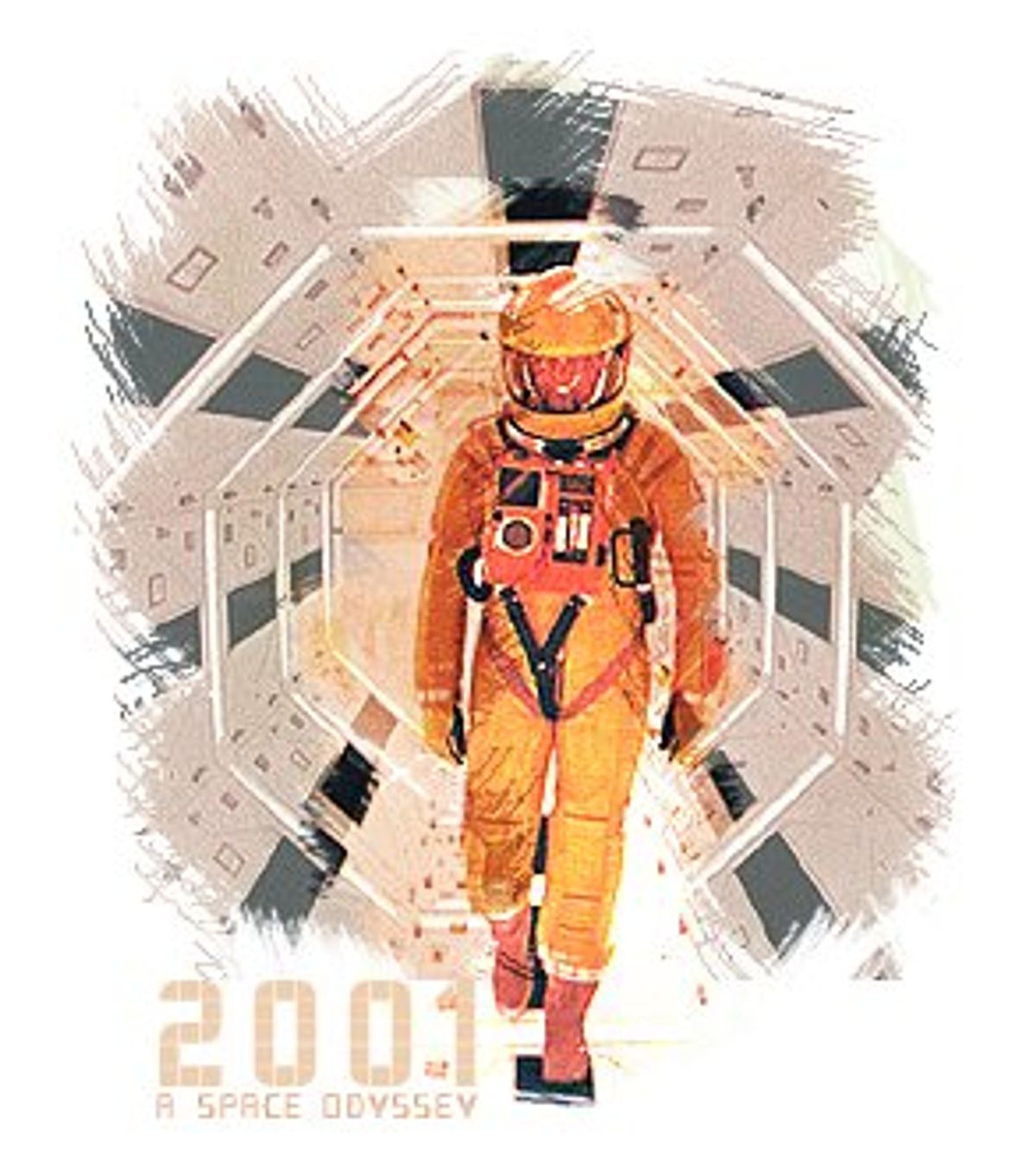 "In the first year of the 21st century, there is strange and wondrous beauty, startling experiences that jolt and mystify, and the danger of complete obliteration." -- Original "2001" trailer

The painter Georges Braque once wrote that art is meant to disturb, while science reassures. When Stanley Kubrick's "2001: A Space Odyssey" arrived in April 1968, both fear and hope were in ample supply.

A few days before the film's premiere, Martin Luther King Jr. was assassinated, and President Lyndon Johnson, burdened by the ongoing quagmire of Vietnam, had just announced he would not seek reelection. Robert Kennedy's assassination was just two months away, with the Soviet invasion of Czechoslovakia to follow. Youth across the world were burning bras and buildings.

At the same time, President Kennedy's dream of American astronauts reaching the moon was within our grasp. As Kubrick and co-screenwriter Arthur C. Clarke understood, excitement over the pending 1969 moon landing, and over space exploration in general, gave us license to consider a greater purpose and more enlightened future for humankind, even as the world seemed to be crashing down -- perhaps especially then.

Excluding "2001: A Space Odyssey," the cinema of Stanley Kubrick is not what you'd call optimistic. His films routinely explore how the folly of obsession leads to our undoing. In one of his earliest films, "The Killing," a band of thieves pull a perfect racetrack heist but then fall prey to personal distractions and betray each other. Later, the obstinate pride of a World War I general in "Paths of Glory" leads to three loyal soldiers' execution for treason. In "Lolita," Vladimir Nabokov's Humbert Humbert ruins his life chasing a teenage nymphet. And, mocking our Cold War nightmares, a series of military blunders bring about nuclear catastrophe in "Dr. Strangelove."

In "2001: A Space Odyssey," however, mankind's manic self-destruction is juxtaposed against the species' ultimate survival and evolution. There are plenty of casualties in Kubrick's film, but they do not derail the path of progress. In fact, "2001" asserts that, as Ralph Waldo Emerson once wrote, death "... assumes the aspect of a guide or genius; for it commonly operates revolutions in our way of life." Kubrick's film dares to ask where destiny will take us next, even as he refuses to spell out the answer.

Viewed more than 30 years later, when we've recently emerged from an age of exceedingly self-conscious irony, it's clear that while "2001" is full of classically Kubrickian black comedy, it never apologizes for dreaming big. The movie balances a youthfully idealistic sense of inquiry with a wisely restrained manner.

The film begins with the famous "Dawn of Man" scene, in which a mysteriously sleek black monolith appears 4 million years before the present day, seemingly to nudge a group of apes into using tools for the first time. The primary use of this new invention, however, is weaponry, forming one of the movie's constant refrains: That which advances us also sets us back. Or vice versa.

After killing its rival with a bone, an ape triumphantly tosses the newfound tool into the air, beginning the greatest shot transition in movie history, as the bone turns into a spaceship in the movie's title year. The ship, on its way to a space station orbiting the earth, floats poetically to the tune of "The Blue Danube," one of many instances where Kubrick effectively tells the story with pictures and music instead of words. (This is a 140-minute film with approximately 40 minutes of dialogue.) Or, more accurately, Kubrick uses these devices to let the story unfold, for unlike most Hollywood movies, the music and camera in "2001" never, ever tell you how to feel.

Interestingly, the film's initial human protagonist, Dr. Heywood Floyd (William Sylvester), is first seen on the spaceship strapped into his chair asleep, with weightlessness carrying his arm aloft in the same position as the ape's was when it hurled the bone. And indeed, Floyd will soon be part of an identical discovery. Soon we learn that another monolith -- the first evidence of intelligent extraterrestrial life modern man has discovered -- has been "deliberately buried" in Floyd's words, on the moon. The monolith is beaming a radio transmission toward Jupiter as if to say, "go that way," which indeed 18 months later sends astronauts there searching for answers in the "Jupiter Mission" sequence.

The voyage to Jupiter aboard the spaceship Discovery (shaped a lot like a bone) is piloted by two humans, Dr. Dave Bowman (Keir Dullea) and Dr. Frank Poole (Gary Lockwood), who, like the rest of the film's characters, show an almost laughable lack of personality. The indication seems to be that we're really not that much more advanced than the apes -- we just have better tools.

In contrast, the ship's talking HAL 9000 computer (voiced by Douglas Rain, who replaced Martin Balsam and is believed by some to have been chosen because he sounded more effeminate) is the most lifelike and ultimately mortal character of all. While Bowman and Poole exercise, draw pictures and watch TV broadcasts from Earth, it is only HAL who expresses genuine emotions. "Forgive me for being so inquisitive," HAL says to Bowman, "but during the past few weeks I've wondered whether you might be having some second thoughts about the mission ... Perhaps I'm just projecting my own concern about it. I know I've never completely freed myself of the suspicion that there are some extremely odd things about this mission." (More "2001" lore: the letters H, A and L each come one alphabetical slot before I, B and M.)

When HAL starts to go haywire during the mission, he becomes a classic Kubrickian character: violent, desperate and suddenly willing to sacrifice any last semblance of order in the name of survival -- which, ironically, is not to be. This portion of the film concludes with Bowman slowly killing HAL by disconnecting his circuitry after HAL has murdered every other member of the crew. In this memorable sequence, HAL's singing of the children's song "Daisy" becomes progressively slower and slower. We've learned to play God, but our celestial Garden of Eden has turned out even worse than the one in the Book of Genesis. HAL's death -- essentially the mere unplugging of a computer -- is easily the most moving scene of the movie.

Which brings us to the film's famously abstract coda, "Jupiter and Beyond the Infinite." As Kubrick's relatively straightforward narrative gives way to a series of kaleidoscopic images, Bowman is transported into the realm of the mysterious, godlike aliens, who have seemingly guided human evolution for 4 million years. That said, everything in this final portion of the movie is open to debate. What we do know for sure is that although Kubrick and Clarke toyed with the idea, we never actually see the aliens, which is perhaps the best decision made in "2001: A Space Odyssey." Sci-fi aliens that we do see in cinema are almost always a disappointment; they rob us of our imagination -- something Kubrick never lets happen in this film.

Hiding the aliens from view also allows Kubrick to extend the notion of "2001" as a modern-day creation fable. The film contains several allusions to the ancient Greek myth of Prometheus, who gave men the use of fire only to see them lose control of its power. Moreover, the astronauts' ultimate destination, Jupiter, is also the Roman name for Zeus, the god of all gods. As the now unmanned Discovery arrives in Jupiter's orbit and Bowman is taken into the alien realm, a higher power has helped us continue forward in spite of ourselves.

Next we see Bowman, now an old man, living out his old age like a zoo attraction in a feigned Louis XVI-style bedroom, assumedly created for him by the aliens. And then suddenly the creation theme continues as a giant fetus inexplicably rises over Earth. Although birthdays have noticeably been happening in the background all along (Poole, Floyd's daughter), all bets are off as to the movie's ultimate statement. At the film's Hollywood premier in 1968, Rock Hudson walked out saying, "Will someone tell me what the hell this is about?"

There's no easy answer to that question -- and yet that is decidedly a strength, not a weakness. In a feat that becomes all the more astonishing with each passing year of banal blockbusters, Kubrick -- at the peak of his commercial and creative success, after "Spartacus," "Lolita" and "Strangelove" -- convinced a major Hollywood studio to back what is essentially a piece of avant-garde filmmaking. He devoted the last half-hour of "2001" to an unexplainable series of dialogue-free images, and audiences loved it. The movie was the third-highest grossing of 1968, after "The Graduate" and "Funny Girl." Perhaps some of those moviegoers didn't take the movie as seriously as scholars and movie geeks might now, viewing it as merely as a pre-Omnimax and MTV music video -- something far-out to get stoned and see. But that such a challenging and ambiguous film captured the national (and international) consciousness is a victory to all of us who believe that strictly narrative filmmaking maintains a stranglehold on popular cinema.

"Movies present the opportunity to convey complex concepts and abstractions without the traditional reliance on words," Kubrick told interviewer Joseph Gelmis in 1969. "I think that '2001,' like music, succeeds in short-circuiting the rigid surface cultural blocks that shackle our consciousness to narrowly limited areas of experience and is able to cut directly through to areas of emotional comprehension." In other words, some have accused Kubrick's film of being too cold and abstract to register with viewers in more than an intellectual way -- but they're wrong. The nonverbal storytelling and eventual delving into abstraction constitute a refusal to spoon-feed the audience ideas.

Despite the wide scope of interpretation "2001" allows, there's something oddly unifying at work here. Enriching and vital as human diversity is, there's a transcendent power in the idea of our having a larger purpose, the chance to be freed from the divisions and diversions of daily life with a guiding hand behind us. If that's not something to get emotional about, what is?