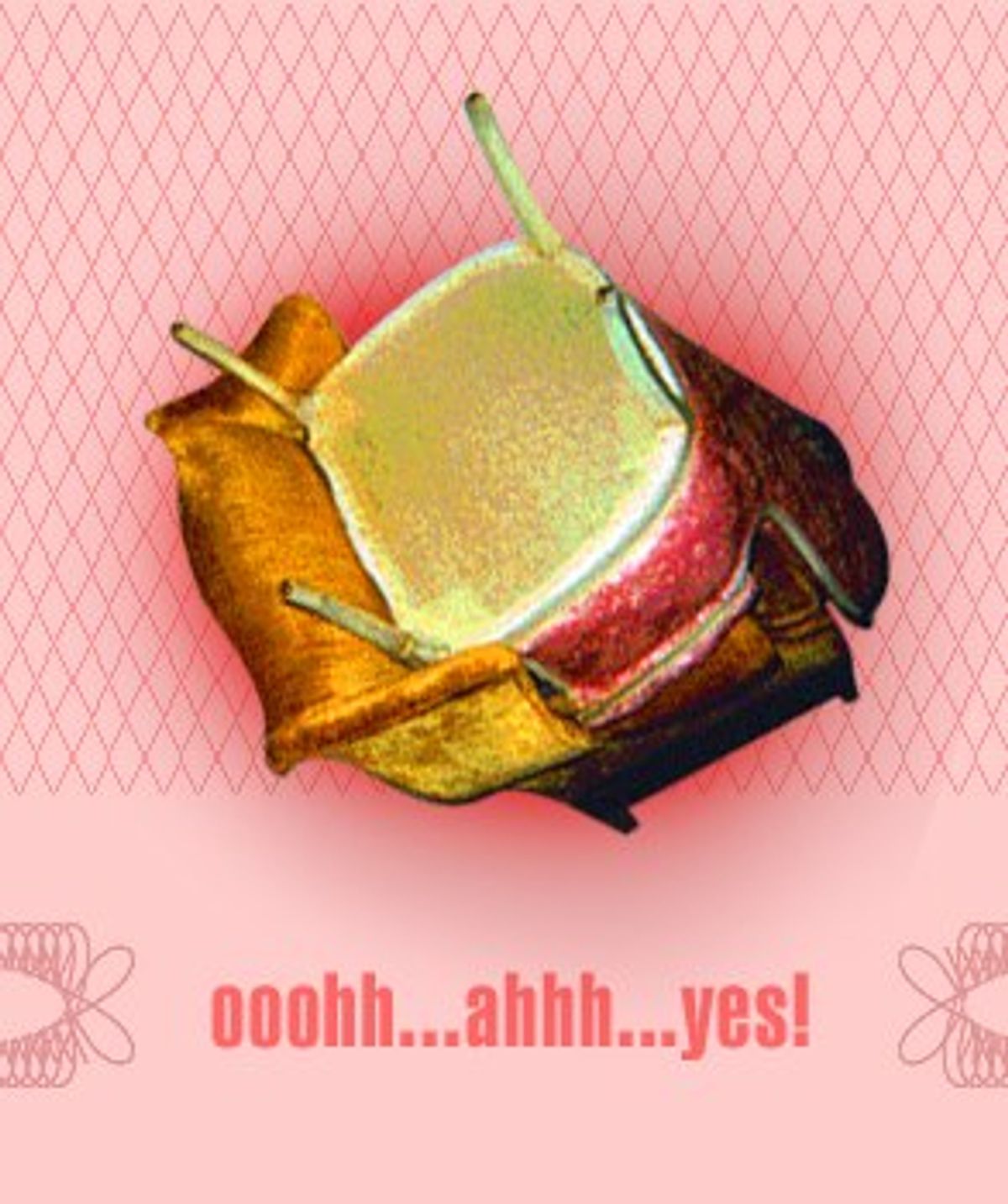 Yes, I am feeling OK, thank you. Why do you ask?

And there are links to unrelated sites with similar sensibilities, such as Prawnography and Playcow, which features Playcows of the Month Jenny McCowthy and Pamoola Anderson.

"Well, I received a gift of two chairs, the Lance and Debbi chairs in the pictorial, the really fancy, overstuffed ones," he says. "I was just really struck by how masculine one chair was and how feminine the other chair was. You don't really see that in modern chairs; these were older. So for some reason I just found that really compelling, and I had a weekend where all my apartment mates were out of town and I was really bored, and I had a full roll of film in my camera. So I just started screwing around, and then after I had the film developed I was so embarrassed I kind of just tucked the pictures in a drawer for a year."

"We did have the problem at the very beginning when it was just one page; people just stole the whole page and put it on their site, and we had to write some nasty letters to people and their ISPs," Childs says. "But we haven't really had any problems since we moved it to furnitureporn.com and made it so big that it's a little unwieldy for people to steal."

The site has waves of popularity, mostly fueled by word-of-mouth. "People think it's hilarious and they tell all their friends, and the e-mails start flying around," Childs says. "It's kind of funny because several of us have received links to it saying, 'You've gotta check out this site.' I think that's a sign of success."

"Yeah," Childs laughs. "I had to do a little research. It wasn't particularly arduous."

The little porn-site satires in the captions, the warning page and even the alt tags are funny, but what makes the site work is that the chairs really do look like they're gettin' it on.

Of course not. The sofa in my office tells me to ask Childs how he feels about the real must-be-18-to-enter thing.

"It's chairs!" Childs says. "They're just chairs! You can't touch me. You can't possibly indict me under any obscenity law in this country, can you? I hope to God not."

Speaking of getting arrested, I ask if the Van Gogh-Goghs make their living with comedy. "Hell no. Dear God no," Childs says. The six men, who are all in their 30s, met in their mutual home state of North Carolina while half of them were attending UNC-Chapel Hill. They moved to Los Angeles en masse to "make it," which they haven't. At the moment, Childs says, they're on a hiatus from performing while they work on some short films they hope to enter in festivals. In the meantime, Childs makes his living as a software tester, and all of the Van Gogh-Goghs work jobs that Childs calls "vaguely high-tech." The presence in the group of a programmer, a graphic designer and a copy editor helps make vgg.com and its offshoots a first-rate source of Web humor -- or, as Childs notes, "at least spelled correctly."

"We did have a serious discussion in the group, actually -- a semi-serious discussion," he says. "You know you can get those little kiddie, plastic, child-sized chairs? There was some brief discussion about whether we should do a photo session with those, maybe adult-sized furniture and child furniture, and that's where we drew the line. Although it's still up for debate. That would be pushing the envelope even more, as it were."

Hmmm. Envelopes. What's that rustling noise in the drawer?