The naked and the dead

"Six Feet Under," Alan Ball's mordant, metaphysical and deeply humane soap opera, may just be the best show on TV. 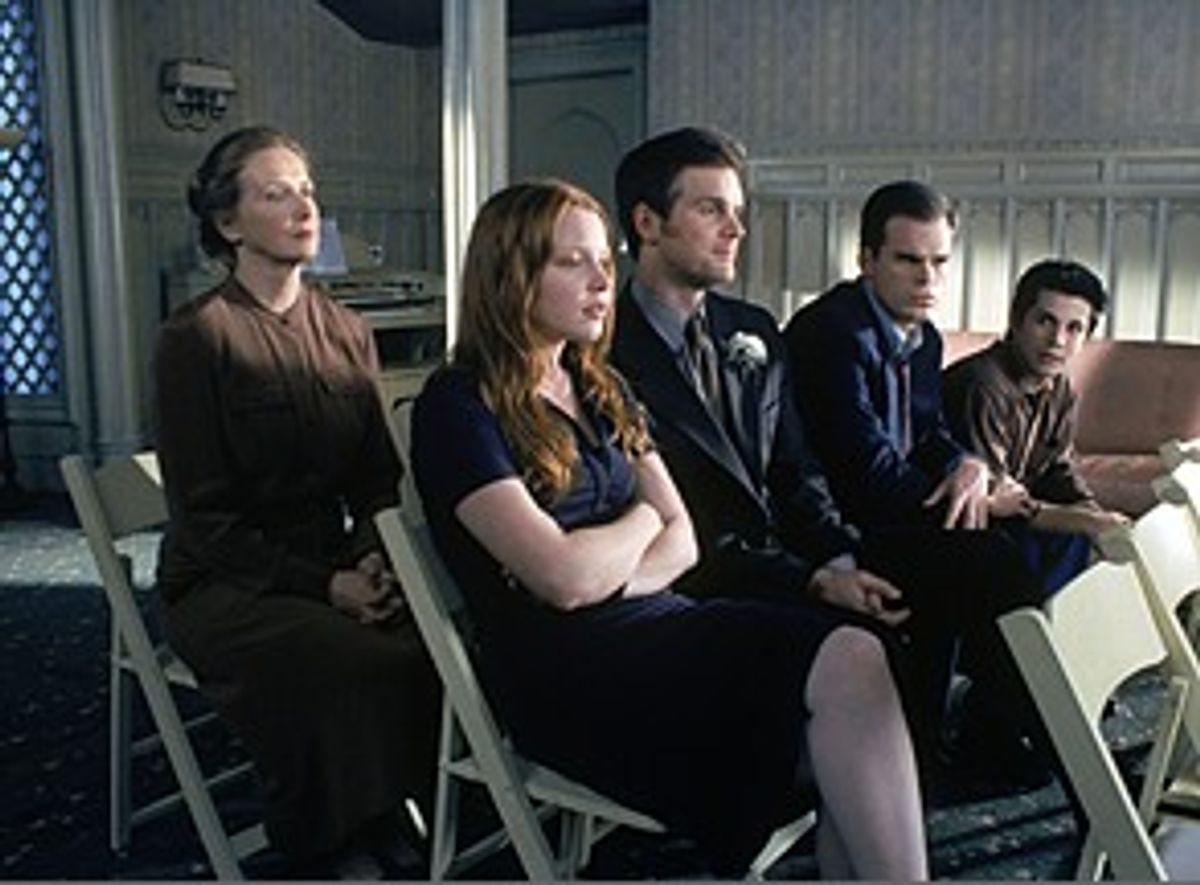 Noted tyrant Josef Stalin once supposedly said, "One death is a tragedy. A million deaths is a statistic." Death is one of those things we tend not to take personally until it's personal -- which is why Fluffy's untimely demise will render a family red-eyed and listless for weeks, but a grisly New York Times headline won't. It's not hard to see how familiarity would breed detachment. Most of us never have to lug the mortal remains of some late lamented down to the basement, drain him, pickle him, stick a plastic plug in him and give him one last makeover before saying adios. It's no wonder that, as dream jobs go, funeral director is not exactly up there with MTV VJ.

"Six Feet Under," Alan Ball's dark, mordant and often inspired series -- which returned to HBO for its second-season premiere last Sunday night -- concerns the lives of a family of dysfunctional, intermittently repressed Los Angeles undertakers who, as the series began, were as inured to death as anyone knee-deep in it would be. The Fishers -- Ruth (Frances Conroy), her 30-something sons Nate (Peter Krause) and David (Michael C. Hall) and her teenage daughter Claire (Lauren Ambrose) -- give fresh meaning to the term "funeral home" by sharing their rambling house with their dearly departed clients and the occasional ghost.

For those who missed the first season, it opens with Nathaniel Fisher (Richard Jenkins), the charismatic but caustic paterfamilias, driving his new hearse to the airport to pick up his son Nate. Taking his eyes off the road for a second to light a cigarette, he gets broadsided by a bus. (Stop! Death! You're killing us!) Nathaniel's sudden death and the return of touchy-feely prodigal Nate have a seismic effect on the family.

It should be noted, however, that Nate is more feely than touchy; after he makes a big show of digging his hands into the dirt at his father's funeral and criticizes David for "sanitizing" the grieving process, David shoots back, "You want to get your hands dirty? You sanctimonious prick. Talk to me when you've had to stuff formaldehyde-soaked cotton up your father's ass so he doesn't leak." But slowly, the Fishers begin to cotton to Nate's "let's eat organic produce and talk about our feelings" ways, and the family gradually begins to unclench.

Timid Ruth, with her look cribbed straight from Grant Wood's "American Gothic," confesses to her long-term affair with a soft-spoken hairdresser and then breaks it off to start a new one with a blustery Russian florist. She learns a new, sensuous approach to flower arranging by shifting her breathing from "up here" (her head) to "down there" (unspecified) and makes frequent, hilariously clumsy attempts to relate to her three children as adults, including repeatedly letting them in on the status of her sex life and inquiring into theirs.

David, who was recently dumped by his boyfriend, Keith (Michael St. Patrick, as a handsome black cop who has been self-esteemed to a high gloss), for being emotionally unavailable, comes out to his family and eventually allows himself to feel grief at his father's death. Following Nate's example, he begins to relax his all-business approach, slowly improving his casket-side manner. Nate, meanwhile, begins to adjust to his new all-death, all-the-time schedule.

He fantasizes about his own death, communes with grievers and sees his father's ghost everywhere. One day, as he stands on a busy sidewalk staring at the ghost of his dad across the street, people walk by in slow motion and glance up at him curiously. For a moment, it's as if he's come to a dead stop in the middle of a parade of souls. As Nate comes to grips with the idea of his own mortality, he commits, or tries to commit, to his elusive and evasive girlfriend, Brenda (Rachel Griffiths); gets his dreaded funeral director's license; and begins to repair his relationship with uptight David, the kind of guy who drinks milk and sits in a straight-backed chair while watching porn.

Despite its morticians'-eye view of the world, "Six Feet Under" is oddly exuberant and life-affirming. Each episode kicks off, you might say, with a bucket; we are introduced to the Fishers' newest charge moments before they draw their last breath. Alternately random, tragic, absurd, violent, inopportune, excruciating and anticlimactic, the opening death scenes alone are worth the price of admission. In one episode, a young actress dies of an overdose right after watching herself getting hacked to pieces in her new slasher movie. In another, a woman is hit in the temple with a golf ball while peacefully reading a book in her garden. People may not be as unique or unpredictable in life as they'd like to think, but their deaths really are like snowflakes.

As the show consistently reminds us, plans, hopes and dreams are life's McGuffins. Without death, there would be no suspense, and without suspense there would be no story. And despite the fun it has with undertakers and the mildly soapy plot lines, "Six Feet Under" is not really about dying at all, but about how we choose to live. Its big (and obvious, but easily forgotten) idea is that you can't start to live until you come to terms with your own eventual stoppage. Death, in other words, is the meaning of life.

Ironically, this is the Fishers' lesson to learn. It gradually becomes clear that what the feckless Nate (who fled the family business to figure out what he wanted to do with his life, but never did) has been fleeing is not the depressing business or even his family's WASPy reserve, but death itself. (It plays a lot more subtly than it sounds.) The dutiful and self-sacrificing David, on the other hand, has eluded thoughts of his mortality by shutting himself down emotionally. Curiously incapable of empathizing with the families he deals with and embarrassed by any displays of emotion, David is, not surprisingly, also totally unable to open up to Keith, who we suspect is the love of his life.

By contrast, the Fisher's gifted restoration artist Federico (Freddy Rodriguez) spends his days putting the faces back on corpses and lives his life more fully and joyfully than any of the Fishers. (The hammiest moments in "Six Feet Under" come when it bludgeons home the differences between white folks' reserve and "ethnic" emoting; Keith and Federico are the only notably happy people on the show.) A true artist, Federico brims with excitement when faced with a particularly gruesome challenge. In one episode, he reconstructs the face of a woman who smashed her face against a stoplight while popping through the sunroof of a limo. When her body arrives at mortuary, she looks, as he says, "like a watermelon hit with a sledgehammer." He rebuilds her missing face and displays it proudly as his wife gushes, "Baby, she's your Sistine Chapel!"

"Six Feet Under" is clearly indebted to "The Loved One," Evelyn Waugh's scathing satire of the American "death-care industry," and to Jessica Mitford's acerbic "The American Way of Death." From the artful, often hilarious reconstruction of bodies (a former porn star has cat-food tins inserted into her huge, wall-eyed breasts to realign them) to the bizarre semiotics of the burial rites (a device with an unfortunate resemblance to a Parmesan-cheese shaker is used to scatter dirt on the casket), the sanitized and denatured rituals of the burial business are wryly and relentlessly lampooned. One day, when business is slow, an uncharacteristically chipper David comes home (after uncharacteristically getting laid) and chirps, "A charter bus out of Vegas overturned on the 10 last night! Forty-four passengers! Most of them dead!"

Television has a long history of ogling cadavers; where there once was "Quincy," there's now "Crossing Jordan" and "CSI." There will always, apparently, be that hysterical prelude to the morgue, "E.R." But death has generally been typecast as either the direct result of a moral offense (i.e., drugs, guns, alcohol, cigarettes, illicit sex), a grave cosmic injustice (dead mommies, dead babies) or both (dead mommies, dead babies, chain-smoking drunk drivers). What's remarkable about "Six Feet Under" is that it takes something everybody knows (we're all going to die) and calmly repeats it, with a surprising lack of morbidity and next to no moralizing, until everybody understands (we're all going to die!).

The Fishers, at least on occasion, smoke, drink, take drugs, drive too fast and have unprotected or extramarital sex. David slept with a male prostitute without using a condom and remains HIV-negative. Ruth had an affair with a stranger and didn't get strangled with her own pantyhose. Claire smoked crystal meth and survived with all her fac- fac- faculties intact. Nate, on the other hand, who doesn't smoke and runs three miles every day, has a mass of enlarged arteries in his brain. (Of course, Ruth and David also attend church and disapprove of swearing. Maybe God's a pale, golfing Protestant after all.)

As Ruth and David take clumsy stabs at becoming more liberated, emotional beings, the idea that psychology will save us is steadily undermined. Claire, meanwhile, continues to respond to her family's clumsy inquiries about whether she's in trouble with her typical scornful disbelief. When she chats with her New Agey guidance counselor, you get the sense she's simultaneously doing him a favor and making fun of his job; such "frank talk" is tolerable but useless.

It's no accident that Brenda -- whose manipulative and miserable parents are both psychiatrists and whose bipolar brother is intent on destroying her relationship to any man but him -- suffers from a terminal case of ironic detachment even more corrosive than Nate's. Like Claire, who dabbles in drugs, sabotages her PSATs and stays with her bad-news boyfriend after he holds up a liquor store at gunpoint, Brenda (to borrow Claire's phrase) is a self-destructive danger-slut, capable of blowing every emotion into a thousand pieces with her weapons of mass psychology. When a confused and jealous Nate sputters, "I'm in it for the long haul, but there's only so much shit I can take!" Brenda replies coolly, "Did you just make me a lifetime commitment just before a thinly veiled threat of abandonment?" (Naturally, he drops his guns.)

Ultimately, "Six Feet Under" -- which could be called the first metaphysical soap opera -- is far more interested in the mysteries of the body and the soul than in the machinations of the psyche. In the final episode of last season, Nate got his bad-news test results and, after accidentally taking a tab of Ecstasy, dreamt that Life and Death were playing a friendly game of Chinese checkers with his dad.

All the Fishers are joining the game, slowly, awkwardly and often painfully. But it's Nate, the marked man, who is most desperately digging his heels into the ground, willing them to take root. It's both funny and sad to watch, but it's probably not wise to feel smug about it.

In an unprecedented moment of maternal insight, Ruth asks Brenda to be careful with Nate, observing that her eldest son is "a lot more fragile than he'd like to think."

Brenda responds: "Aren't we all?"