Cruising for an escort but can't afford $300 an hour? Try FrugalJohn.com! 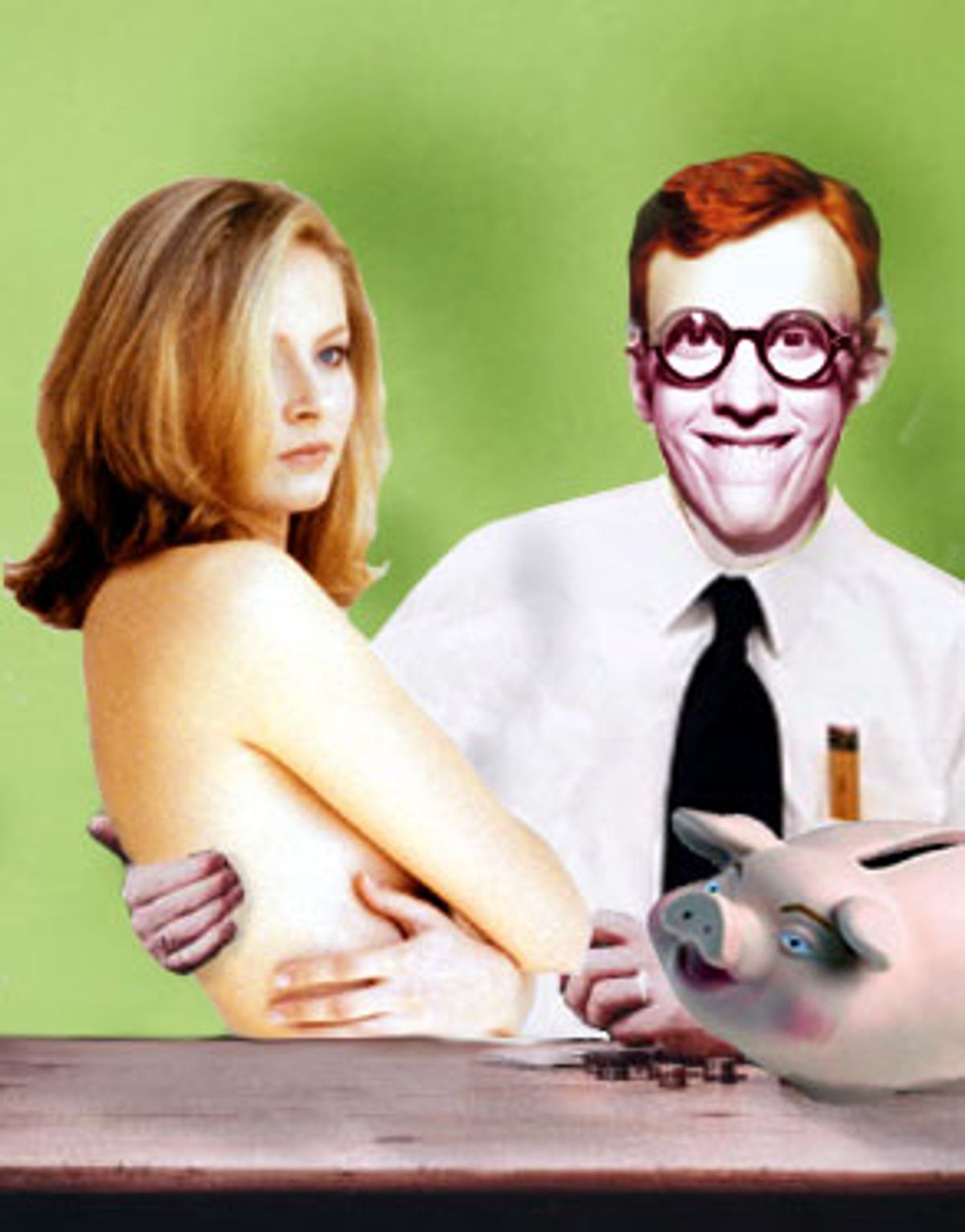 An adult Web site called FrugalJohn, billing itself as "Where cheap bastards find quality ladies," has become a favorite of Silicon Valley horn dogs hard hit by the dot-com downturn.

FrugalJohn features a clickable directory of more than 80 female escorts and full-body massage providers whose going rate -- no more than $200 an hour -- significantly undercuts the $300-and-up rate typical in the Bay Area during boom times. It's the sex trade's version of the auto industry's zero percent financing, and customers are lining up to drive these babies off the lot. But unlike some used car dealerships, the site is careful to stay this side of the law. (The site's disclaimer states, among other things, that "time together may include services such as erotic dancing, modeling, or sensuous massage. Nothing else is contracted for, nor is it requested to be contracted for, or compensated for in any manner.")

Launched last November, FrugalJohn has already attracted something of an underground following among "hobbyists," as those who frequent these ladies like to call themselves. The site's page views -- currently about 350,000 a month -- have doubled every 30 days since launch. The FrugalJohn network has expanded to include escorts from Seattle, Los Angeles, Sacramento and San Diego -- with Houston and Dallas soon to come, so to speak.

No one's more surprised at FrugalJohn's tumescent popularity than its founder, a 30-something out-of-work midlevel Internet executive who goes by the handle Giorgio Xo.

"I started it as a lark, but it's exploded into a real business," says Giorgio, with a genuine sense of wonder. "And it's all been viral marketing. I don't do any advertising, and I'm not even listed on the search engines. I'm kind of scared to think of what might happen if I advertise."

Giorgio, a U.C. Berkeley grad who's been laid off by three dot-coms in as many years, got the idea for FrugalJohn after reading dozens of posts on the general discussion board of San Francisco Redbook, an online guide to sex services in the Bay Area. The guys were complaining that local escorts were charging too much, considering the region's battered economy. Giorgio, having built and managed quite a few corporate sites in his day, had no problem cobbling together a no-frills site listing escorts and massage providers whose fees were more in line with recessionary realities. Soon, guys began suggesting other cut-rate cuties for inclusion on the site, and then the ladies themselves began contacting Giorgio, clamoring to be featured on FrugalJohn.

The FrugalJohn family of sites -- what Giorgio likes to call "The Atomic John Network" -- has grown to include DoubleDee, devoted to large-breasted escorts (with similarly inflated rates), along with FBSM, which features providers of full-body sensual massage. "Full-body massage is very popular with married guys who don't want to feel too guilty and yet have a different kind of sexual experience," explains Giorgio. Next up are spinoff sites devoted to AMPs (Asian Massage Parlors) and $700-per-hour and up porn star escorts. FrugalJohn has become so popular that Giorgio had to lease two servers in Texas to handle the traffic and is talking about snaking a T3 line into his Silicon Valley home by summer.

"I think the success of FrugalJohn is because I've kept it as simple as possible," says Giorgio. "Guys don't like being surprised. They want to know what does she look like, how much does she charge, and what's her friggin' phone number?"

Giorgio understands his market niche. FrugalJohn is the Wal-Mart of escort directories, where every aisle is crammed with Red Light Specials. And while FrugalJohn injects a bit of indirect editorial commentary by not including what Giorgio calls "well-known scam artists and low-quality providers," the site's chief attraction isn't quality, but price point.

"The initial group of escorts I had on the site weren't, uh, the most aesthetically pleasing ladies," Giorgio says. "But I've been working hard to improve the look of the site, getting better photographs. So now I have not necessarily better-looking ladies but better-looking pictures. I'm not looking for fantastic women, but there are plenty of really well-regarded ladies on the site."

Escorts and massage providers aren't charged for their listing on FrugalJohn, but Giorgio's thinking about offering premium placement on the site for about $50 a month, which works out to 15 minutes on the clock for a $200-per-hour escort. Even though Giorgio's not making money directly from the site yet, he's already landed several Web site projects from escorts he's met through FrugalJohn.

Running an online escort directory, it turns out, isn't much different than managing a corporate Web site. The same rules apply: Keep it simple, know your audience, keep the customer satisfied. "It's just like my regular Internet job was; the only difference is that I'm not hamstrung by the six-month VP review process," says Giorgio. "I can have a site up in a day and see immediately how it's doing and start fine-tuning it. As a Web professional, it's much more rewarding."

Plus, overseeing an escort directory has certain fringe benefits. "I get a lot of unsolicited pictures of naked women," Giorgio reports. "Another fun thing is that I started doing photo shoots for the site, so now I have a number of very good-looking naked ladies running around the house."

The recession has hit the escort business hard, particularly in Silicon Valley. During the boom, Valley escorts were routinely charging $350 an hour, and some high-rolling dot-commers were flying to other cities to see their favorite $500-an-hour companion. But these days, Giorgio reckons the average going rate for an escort in the Valley has dropped to about $260 an hour. And plenty of ladies, like most on FrugalJohn, are willing to offer even deeper-dish discounts. Some Silicon Valley escorts have become "proactive" in marketing, e-mailing or telephoning regular clients to drum up business.

"Even escorts who have a posted rate of $300, when a guy actually calls up, he'll hem and haw, and she'll say, 'Well, how about $250?'" Giorgio explains. "The higher-end girls all say the downturn hasn't affected them, but I know for a fact it has. There were a handful of providers who retired on the money they made in the stock market during the boom, and now all of sudden, they're coming back in to work."

Escorts featured on FrugalJohn are generally happy to be there, since it's free advertising. Giorgio says he gets e-mails from providers thanking him for the service, and the community message board of San Francisco Redbook now features escorts singing Giorgio's praises and, by extension, their own.

"Wonderful job you are doing on FrugalJohn!" posts JillSix, a $180-an-hour escort featured on the site. "Your creativity and resourcefulness shines through. I especially appreciate your selectivity and class, keep up the good work, I wish you only the Very Best."

"I"ve gotten a good bit of business from FrugalJohn," says Kelly DD. "But call me in a couple of months. I'm paying for premium placement on the site."

The only complaint from escorts seems to be that FrugalJohn's bargain prices promote more window shopping than actual business from the cheap bastards.

"I've gotten calls from FrugalJohn, but only one date so far," says Desire. "Most of the calls are just inquiries."

Even escorts too expensive to make the FrugalJohn cut acknowledge that Giorgio is serving his demographic well.

"Frugaljohn.com is an excellent resource for hobbyists looking for economical escort services," e-mails Brittany, a $300-per-hour Seattle-based escort. "Although I do not benefit personally from these sites as I focus on a different market segment, I know that the women that are listed really appreciate the service. I like the fact that if I'm not able to accommodate a gentleman I can refer him to Frugaljohn.com."

FrugalJohn's reach is impressive, based on the return e-mail addresses Giorgio sees. The site gets lurkers from around the world, including a contingent from Saudi Arabia, where viewing FrugalJohn, technically speaking, is punishable by death. Closer to home, many of the site's regular surfers check out FrugalJohn from inside some of Silicon Valley's most respected companies, including Sun, Oracle, and Cisco. Plus, Giorgio sees the occasional dot-gov address.

With the success of FrugalJohn, Giorgio isn't in any hurry to look for a straight job. In a way, he's found his calling. "I'm not ashamed of what I'm doing," Giorgio says. "I'm providing a killer service for everyone. I'm saving guys money. And it's empowering for the women because they can make money on their own terms."

FrugalJohn's upcoming move into Texas is timely and could prove to be a much-needed tonic for a local economy battered by recession and corporate malfeasance. There have to be plenty of out-of-work guys in Houston who would like to do to a reasonably-priced escort what Enron did to them.